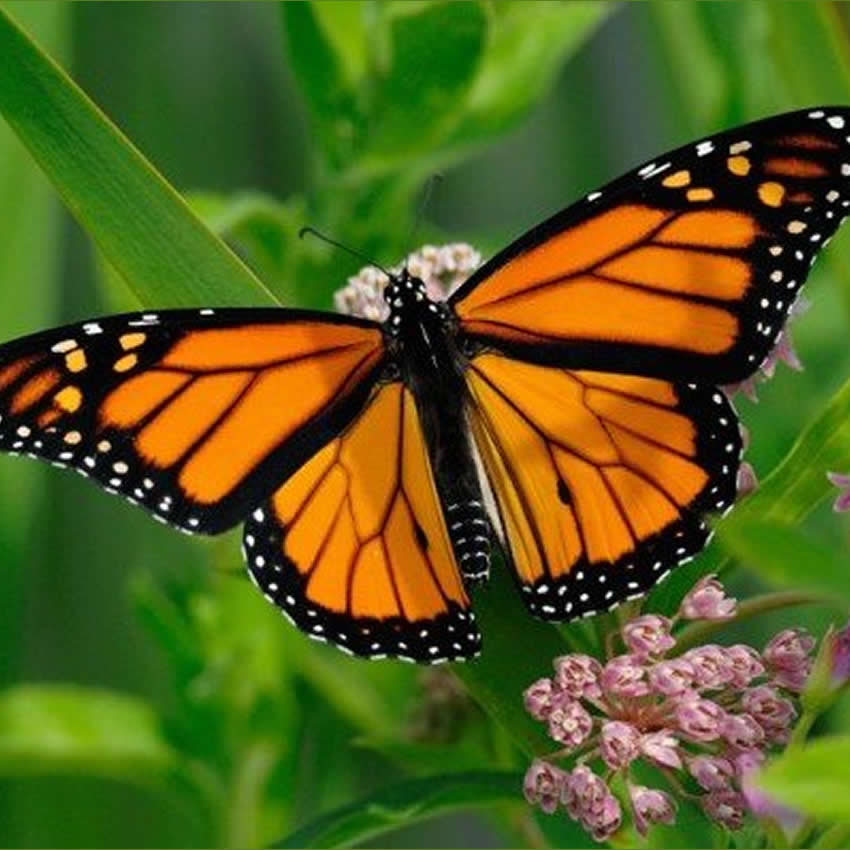 The Monarch Butterfly Biosphere Reserve (Reserva de Biosfera de la Mariposa Monarca) is a World Heritage Site containing most of the over-wintering sites of the eastern population of the monarch butterfly.

The reserve is located in the Trans-Mexican Volcanic Belt pine-oak forests ecoregion on the border of Michoacán and State of Mexico, 100 km (62 miles), northwest of Mexico City. Millions of butterflies arrive in the reserve annually.

Butterflies only inhabit a fraction of the 56,000 hectares of the reserve from October–March. The biosphere’s mission is to protect the butterfly species and its habitat.

Most of the over-wintering monarchs from eastern North America are found here. Western researchers discovered these areas in 1975. Presidential decrees in the 1980s and 2000 designated these still privately held areas as a federal reserve.

The Reserve was declared a Biosphere Reserve in 1980 and a World Heritage Site in 2008. The reserve remains predominantly rural. Reserve administrators continue to be concerned with deleterious effects of illegal logging and tourism. Conservation efforts sometimes conflict with the interests of local farmers, community-based landowners, private land owners and indigenous people.

The reserve was designated in 1980 by President José López Portillo.

In the late 1980s reserve management was delegated to the Secretariat of Urban Development and Ecology. It was at this time assigned the category of “special biosphere reserve.”

In 1986, the area and boundaries of the zones were defined. In 2000, it received its name (Reserva de la Biosfera Mariposa Monarca).

UNESCO declared the Monarch Butterfly Biosphere Reserve a World Heritage site in 2008 as a Natural Asset. Currently the area is known for tourism, logging, mining and farming. It has remained mostly rural, noted for communities of Otomi and Mazahua.

Millions of butterflies travel south into Mexico, from Texas and then follow the Sierra Madre Oriental mountains to the preserve. The butterflies congregate, clustering onto pine and oyamel trees. To many, the trees appear orange and branches sag from the weight. Come Spring, these butterflies migrate across America, sometimes ending up in Eastern Canada. Over the time it takes them to make this journey, four generations of monarch butterflies are born and die.

The monarch butterflies migration patterns are altered by climate change. During migration, monarchs fly north once they are exposed to cooler temperatures. Dense congregations are thought to conserve heat. If warmed by the sun, the butterflies take flight. the beating of their wings has been compared to the sound of a light rain. The reserve is susceptible to lethal, freezing temperatures.

The reserve extends from the mountainous forests of eastern Michoacán to western Mexico State 100 km northwest of Mexico City. The reserve in Michoacán contains the highest elevations in the state, including peaks that reach 2,700 masl (metres above sea level). The climate is classified as being temperate and somewhat moist with a rainy season in the summer. The average maximum temperature is 22 °C (71 °F). Sub-climates exist in this area: cool and semi moist, semi cold and semi moist, and cold and semi moist.

The reserve is characterized by outcroppings of basalt forming fissures, faults and cliffs in a northeast-southwest orientation. Rock formations have replaced older ones such as volcanic cones and old lava beds. The soil is highly permeable, resulting in little surface water. There are some small ponds and arroyos. The forests of pine and oyamel fir trees provide microclimates that provide shelter when temperatures fall to freezing and/or there are winter rains.