Money doesn’t buy happiness: Millionaires say they need to at least double their wealth to be happy

Even millionaires believe true joy remains elusive, despite their fortune – and can only achieve it through obtaining even greater wealth.

Moreover, many believe they’d need at least double their net worth to be content.

Researchers at Harvard Business School quizzed 2,000 millionaires for the study, which is considered to be the first of its kind.

How much is enough? A quarter of millionaires worth $1.5 million (£1.18 million) said that they’d need eleven times more money to be perfectly happy, despite their wealth (stock image)

Professor Michael Norton, who led the research, asked respondents to rank their happiness on a scale of one to ten.

He then asked them to specify what it would take for them to reach optimum levels of contentment.

Interestingly, this pattern was consistent across respondents, regardless of their fortune.

Specifically, a quarter of millionaires worth $1.5 million (£1.18 million) said they’d need eleven times more money to be perfectly happy, while one quarter said they would need six times as much.

Another quarter said they would need twice as much money to finally be happy.

Even those with a fortune of $7.6million (£6 million) were only moderately happier, but still said they still desired greater wealth.

However, those who earned their fortune were happier than those who merely inherited it, suggesting that accomplishing goals is key to satisfaction.

The full results of the study were published in Personality and Social Psychology Bulletin. 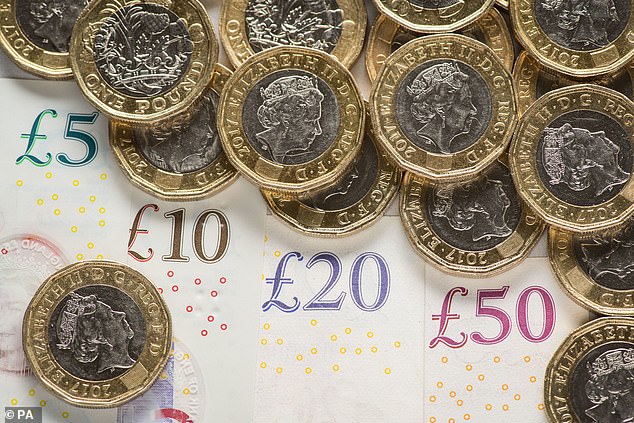 Researchers at Harvard Business School quizzed 2,000 millionaires for the study, which is considered the first of its kind (stock image)

It comes just a few months after scientists found that social mobility is partially written into our genes, essentially determining whether we’re high-flyers or high-earners.

A study of more than 20,000 people in the UK, US and New Zealand found those with certain genetic variations earned more money, had better careers and got further in education.

Regardless of which class they came from, their genes could help them do better in life than their parents before them.

A team of researchers from Duke University School of Medicine in Durham, North Carolina, undertook a genome-wide association study (GWAS) on more than 20,000 individuals from Britain, New Zealand, and the United States who were followed from childhood into adulthood.

The GWAS looked for thousands of tiny changes in genetic code in the individuals that previous studies have linked with success at school.

Unsurprisingly, they found that men and women with ‘genes for education’ – or high polygenic scores – did better academically.

But the same genes also helped make someone upwardly mobile.

Those with a high polygenic score did better in terms of education, occupation, and wealth, compared with their parents and siblings, regardless of the individuals’ familial social class as children.

Lead author Dr Daniel Belsky, from the Department of Population Health Sciences at Duke University, said: ‘Findings from these analyses show that education-linked genetics may provide clues to biological processes in human development that influence success in school, at work, and in the accumulation of wealth across life.’

WHAT ARE POLYGENIC SCORES?

A polygenic score (polygenic means many genes) is an algorithm that looks at an individual’s DNA.

It adds up multiple variants about an individual’s health and social status.

Researchers say this number could indicate advantages inherited by some people in the form of biological mechanisms (genes) or socially transmitted opportunities (for example class) from their parents.

From this, researchers use it to predict future educational and economic success.

Research has shown that children with higher polygenic scores (PGSs) were more likely on average to obtain an A and B at GCSE.

It can also be used to work out which people have a genetic risk for certain traits or diseases.

Some traits – for example whether an individual has cystic fibrosis – are based on just the presence or absence of a single variant.

However, the vast majority of traits – such as height to vitamin D levels – are based on many variants.

A PGS helps put one person’s result in the context of the rest of the population.