Money ‘is NOT the real reason Payne Haas wants out of Brisbane’: Giant forward is ‘angry’ and ‘threatened to never play for the club again’ after contract demand was turned down

Payne Haas’ bombshell request to be released from the Broncos effective immediately was motivated by his desire to win premierships and not demands for more money, it has been reported.

Haas wanted the club to include a clause in any new agreement that would allow him to leave the team if they don’t make the top eight in the first year of the contract, miss the top six in year two, or fail to break into the top four in the third year, the Sydney Morning Herald reported.

The club refused the demand, which angered the 22-year-old so much he threatened to never play for the club again on Wednesday night, according to the publication.

Brisbane have struggled since Haas made his NRL debut with the side in 2018, reaching the finals just once, when they lost to Parramatta 58-0 in 2019.

They currently sit fourth on the ladder as they ride a six-game winning streak.

Australian Rugby League Commission chairman Peter V’landys weighed in on the saga on Sunday, coming down on the Broncos’s side.

‘If you sign a contract you should honour it,’ he told the Courier Mail.

‘If either party hasn’t breached a condition of a contract, it is valid … naturally you can have behind-the-scenes talks, but you don’t play it out in the media.

‘At the end of the day you’ve signed a contract and they should honour the agreement.

‘That’s what fans look for.’ 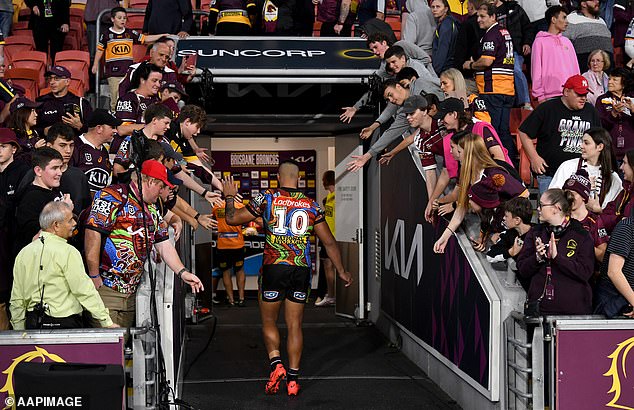 Fans high-fived Haas as he left the field after the Broncos’ amazing win over the Titans on Friday night. Angry Brisbane supporters also booed him whenever he touched the ball 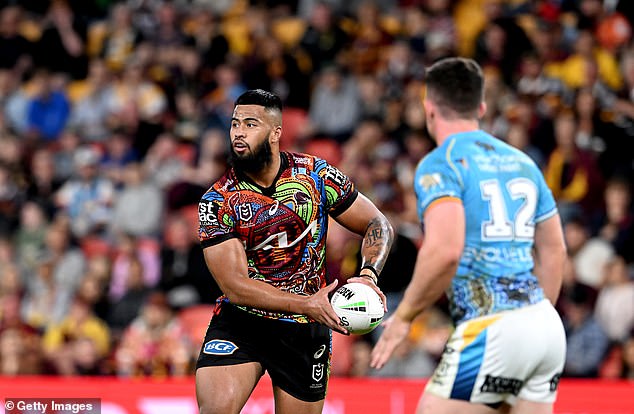 On Saturday Haas admitted he wants to stay at the Broncos long-term and hopes his management and the club can reach an agreement.

‘I turned up here [on Friday night] to play against the Titans, so that shows I am here playing for my teammates and the club. That’s all that matters.

The highly rated prop’s battle with Broncos management resulted in him being booed by fans whenever he touched the ball in Brisbane’s amazing come-from-behind win over the Gold Coast on Friday night.

‘I’m not usually one to get rattled but when the boos came out I had to compose myself and stay in the game and do my job for the team,’ Haas told Channel Nine after the match.