Monkeypox has been declared an ‘imminent threat to public health’ in New York because of the ongoing and rapid spread of the disease, health officials announced on Thursday.

The state leads the nation in confirmed cases, having recorded 1,247 of the 4,907 infections in America — with nearly all cases in and around New York City. State health commissioner Dr Mary Bassett said the declaration would ‘free up’ extra funding to help prevent the disease’s spread.

It came the same day San Francisco officials said they would declare a ‘local emergency’ over monkeypox as its infection tally reached 241. No nationwide alert has been issued yet, although the Biden administration is considering the move.

A total of one-in-five Americans now fear they may catch monkeypox, a poll of 1,500 adults from the Annenberg Public Policy Center in Pennsylvania revealed today — as public concern over the disease which could spill into the wider population ticks up.

The above map shows the number of monkeypox cases declared across the U.S. by CDC 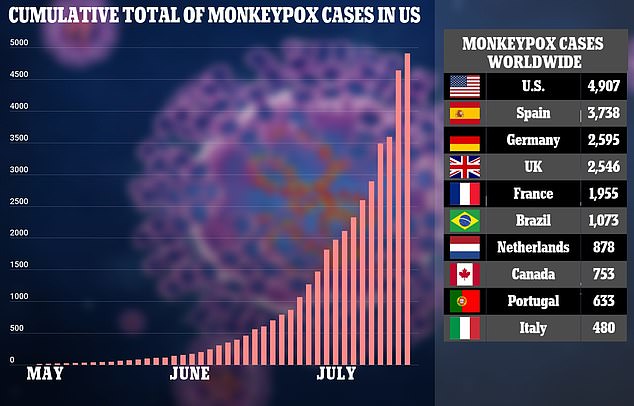 The above graph shows the total number of cases of monkeypox confirmed in the United States. This week the tally shot up by more than 1,000 in 24 hours, which officials said was down to ‘historic’ cases finally being recorded

‘Every American should pay attention on monkeypox’, health chief says

Every American should ‘pay attention’ to the monkeypox outbreak because the disease could spill over into more groups than just gay men, the head of the Department of Health and Human Services (HHS) warned Thursday — before U.S. cases topped 4,900, the highest tally in the world.

Dr Xavier Becerra, secretary of the HHS, issued the stark warning during a press briefing, adding that infections with the disease were ‘painful’ and could also be dangerous. He did insist it was ‘absolutely’ still possible for the U.S. to eliminate monkeypox.

The vast majority of cases are still among gay or bisexual men, but last week America recorded its first two cases in children — in a toddler in California and infant traveling through Washington D.C. — and a pregnant woman who tested positive when she was near full-term.

Top experts have been warning for weeks that other groups could catch the disease because it does not require sexual contact to transmit, but only close contact such as hugs or brushing the rashes of an infected person.

Making the declaration Thursday, Bassett said: ‘Based on the ongoing spread of this virus, which has increased rapidly and affected primarily [gay or bisexual male] communities… I’ve declared monkeypox an Imminent Threat to Public Health throughout New York State.

‘This declaration means that local health departments… will be able to access additional State reimbursement, after other Federal State funding sources are maximized.

‘[This will held] protect all New Yorkers and ultimately limit the spread of monkeypox in our communities.’

Concern has been growing over monkeypox after cases spiked by more than 1,000 in a day on Wednesday — with officials predicting they will keep rising for ‘weeks’.

About 99 percent of infections have been detected in men, with the ‘vast majority’ among those who are gay or bisexual.

But top experts fear the disease will spill into more vulnerable groups. Over the last seven days America has recorded its first two cases in children — a toddler in California and infant in Washington D.C. — and one in a pregnant woman.

‘Many people in our LGBTQ+ community are scared and frustrated,’ she said.

‘This local emergency will allow us to continue to support our most at-risk, while also better preparing for what’s to come.’

Director of Health for the Bay Area city Dr Grant Colfax said the COVID-19 pandemic had taught them that early action was needed to contain the disease.

Their declaration will go into effect on August 1.

The Biden administration is also expected to declare monkeypox a health emergency in the coming days, Politico reports.

It would follow on from a similar decision made last week by the World Health Organization, after they previously shied away from the move.

When this was declared, the White House said it was a ‘call to action’ for countries to begin ‘stopping’ the spread of the virus globally.

Both cities have struggled to get hold of enough doses of the vaccine to protect citizens against the disease.

New York City is offering the jab to all gay or bisexual men who have multiple sexual partners in a fortnight, while San Francisco is rolling it out to ‘everyone who wants it’.

Roll outs have previously been slammed for their slow pace, and how it’s ‘ridiculous’ so few jabs are available in such large cities. 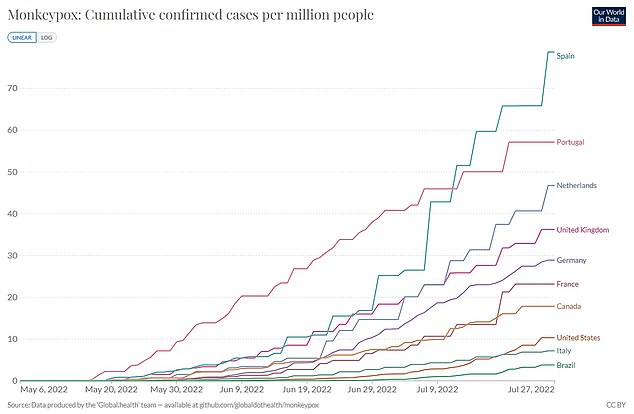 America has the most confirmed monkeypox cases in the world. But when the data is considered per head – a more accurate measure because it takes into account countries differing population sizes – it shows Spain has the worst outbreak

It comes after a survey warned concerns over monkeypox were growing among Americans amid spiraling cases.

The Annenberg Public Policy Center, a part of the University of Pennsylvania, interviewed 1,500 Americans over whether they were concerned about catching Covid or monkeypox two weeks ago.

It found 19 percent said they were worried about being infected with monkeypox. A greater proportion — 30 percent — said they still had concerns over catching Covid.

The majority of people surveyed said they were not concerned about becoming infected with either disease.

The center’s director Kathleen Jamieson said: ‘It’s important that the public calibrate its concerns to the reality of the risk of Covid and monkeypox and act appropriately.’