This is the terrifying moment a free diver gets up close and personal with a ‘monster’ Saltwater Crocodile and even fearlessly lays underneath the reptile.

He was making a short documentary about the three-metre-long crocodiles, that can grow to be more than five-metres long and weigh 450kg, earlier this year.

Throughout the footage, the diver can be seen getting extremely close to the huge American Saltwater crocodiles – spending a lot of time in biting range of the reptiles.

One of the fearless divers even lays underneath the crocodile, bravely reaching his hand towards the croc’s legs while in another shot he puts his face precariously close to its jaw.

A camera is also held directly in front of the crocodile’s mouth so that its impressive and sharp teeth can be shown off as the divers move around the animal.

A croc also appears from behind moving sand to be staring straight down the camera lens – and at the diver sitting behind the screen.

The crocodiles seem to be interested in the diver, moving their heads to follow the swimming human, but do not become aggressive or start to move away from their visitor. 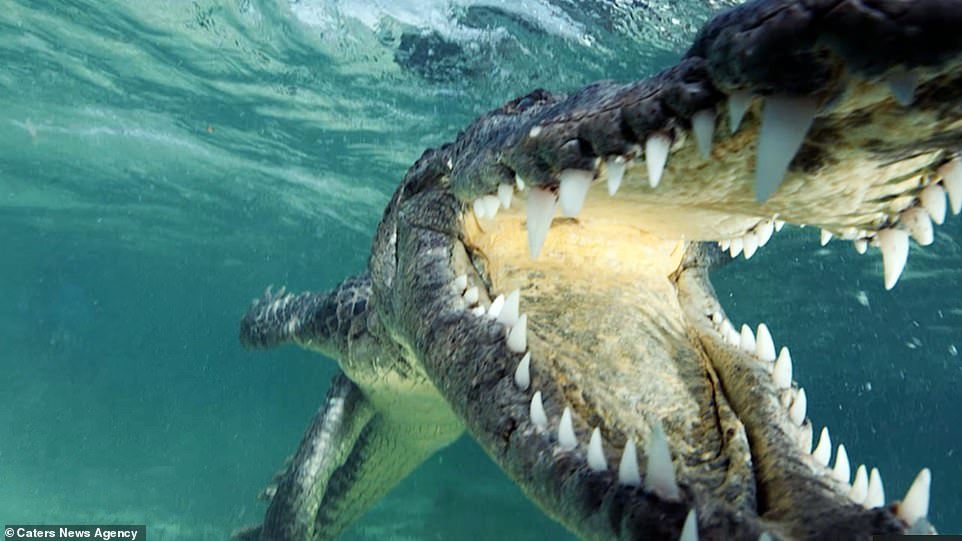 Close up shots show the crocodile’s large, sharp teeth and scales which are perilously close to the filming diver’s head 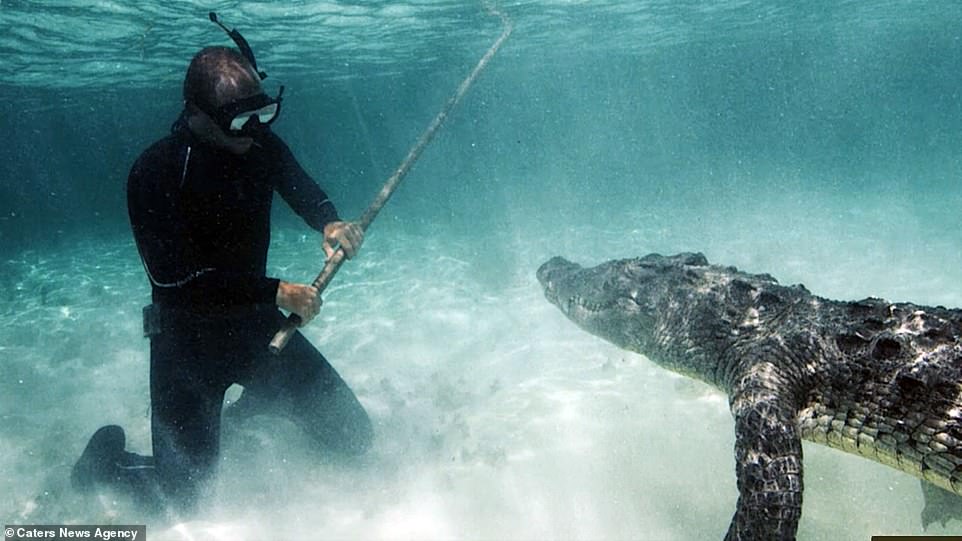 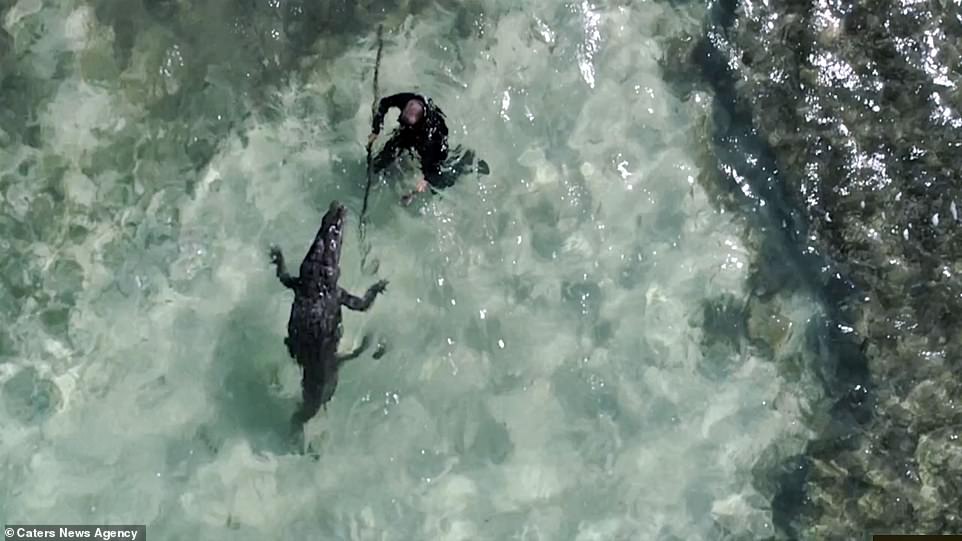 Aerial shots show the diver at work in the water and expose how close he gets to the huge crocodile.  Videographer Florian Fischer said ‘supporting spotters watch the crocodiles from the surface’ while the filming is taking place

Videographer Mr Fischer acknowledged there is always a risk when working with animals, but said his team were well experienced.

He said: ‘There is always a potential risk when dealing with wildlife.

‘In this case it is important to know the behaviour of the crocodiles and to make sure we have supporting spotters to watch the crocodiles from the surface.

‘In the past we have done films like this about Sharks, Killer Whales, and Anacondas, so we’re well seasoned in dealing with potentially dangerous animals.’

Florian and his film crew have plenty of experience in the art of wildlife videography, noting the people involved know what they’re doing and understand the risks.

Florian added: ‘The person in the water handling the crocodile has many years of experience with these animals.’ 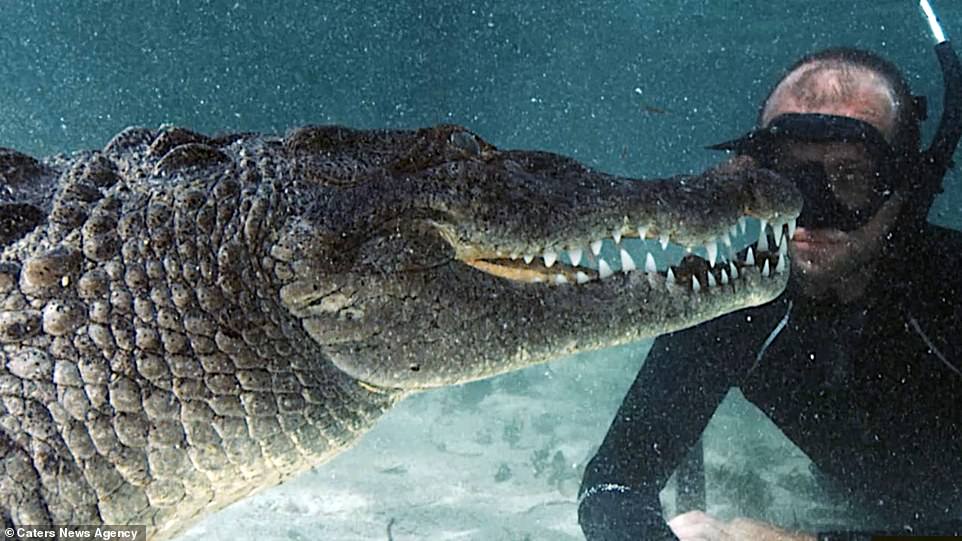 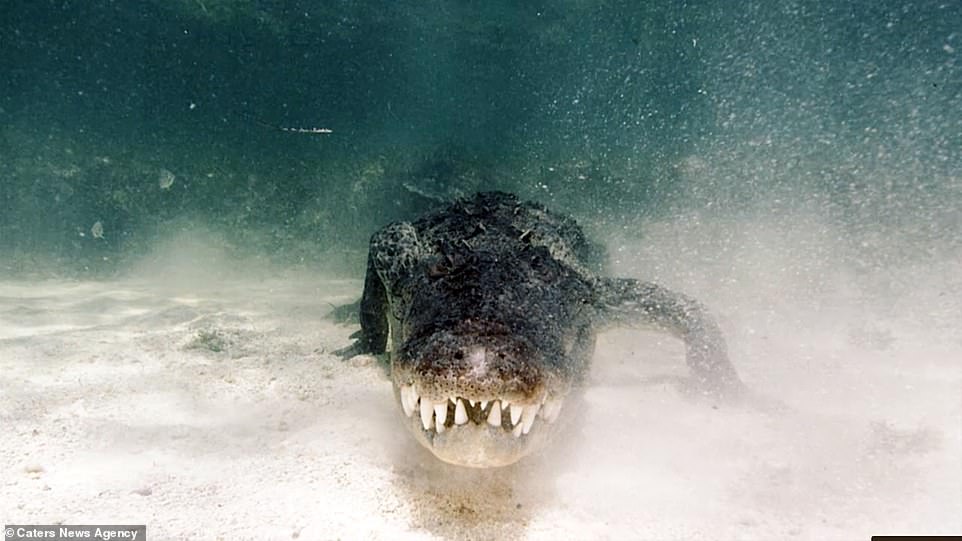 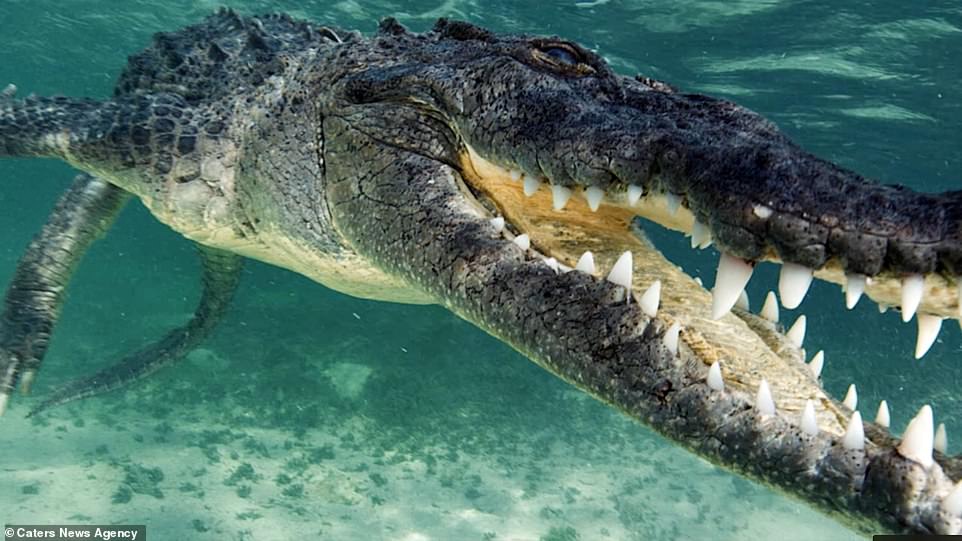 The crocodile shows off its teeth. Mr Fischer said: ‘In the past we have done films like this about Sharks, Killer Whales, and Anacondas, so we’re well seasoned in dealing with potentially dangerous animals’