A ‘monster’ rat nicknamed Mr T who weighs just under a kilogram is aiming to lose half its body weight as part of a pet-slimming competition.

Mr T has ballooned to a whopping 0.975kg (2.1lb) – largely as a result of his love for gorging on porridge.

The pet, from Neath, south Wales, will now go head-to-head with 12 porky cats and dogs from around the country in the ultimate pet weight-loss challenge run by the PDSA.

They will be put through their paces in the PDSA Pet Fit Club’s strict six-month diet and exercise programme.

The programme is individually tailored to each pet’s specific needs, and overseen by vets and vet nurses at their local PDSA pet hospital.

The porky rat needs to shed 1lb, to be at his ideal weight of half a kilogram. 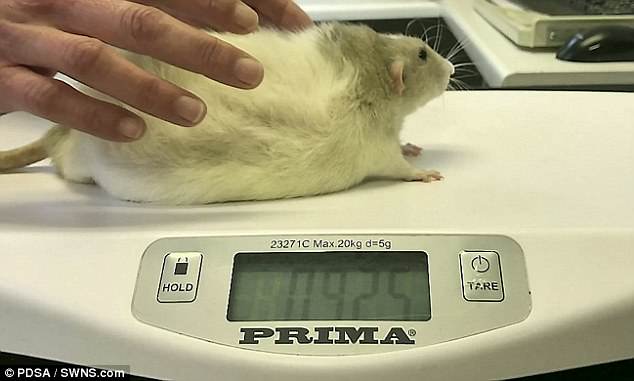 Mr T weighs 09.25kg. His weight ballooned due to his love for his favourite food, porridge

He will go head-to-head with a Shih Tzu dog named Billy, who is 125 per cent overweight at 11.25kg and portly Beagle Bella who tips the scales at a massive 24kg.

Pollyanna the pug’s unhealthy love affair with cheese has seen her balloon to 50 per cent of her ideal weight, at 11kg. 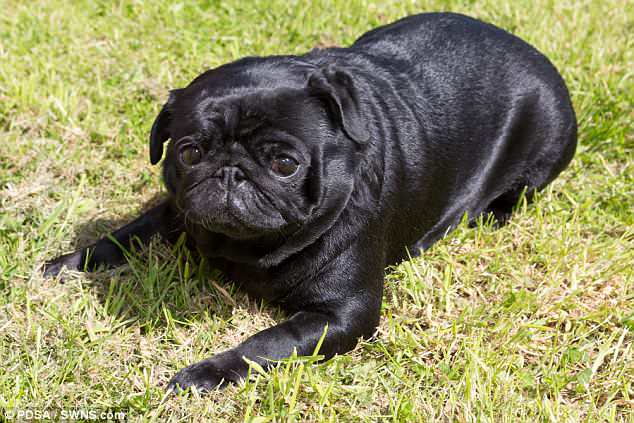 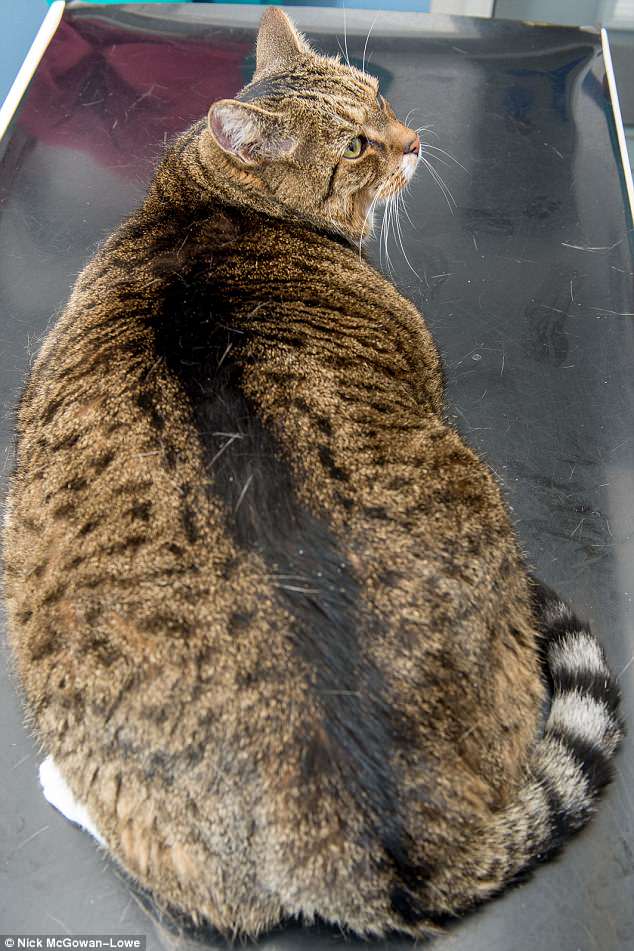 Overweight cat, Benji, owned by Michelle and Ian Liddel, can no longer fit through his cat flap 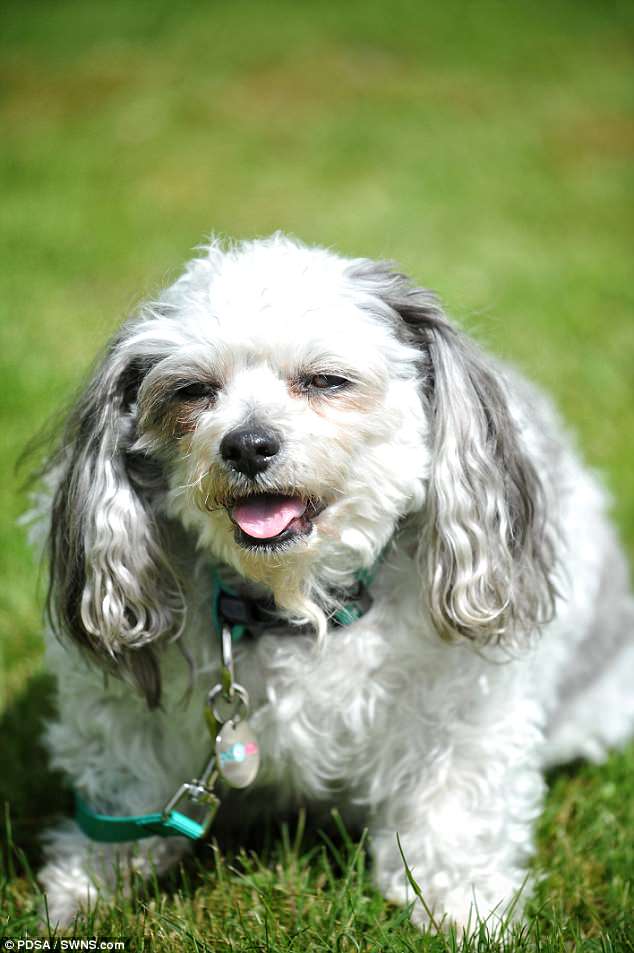 Mr T will face Billy the Shi Tzu in the competition who at 11.25kg is 125 per cent overweight 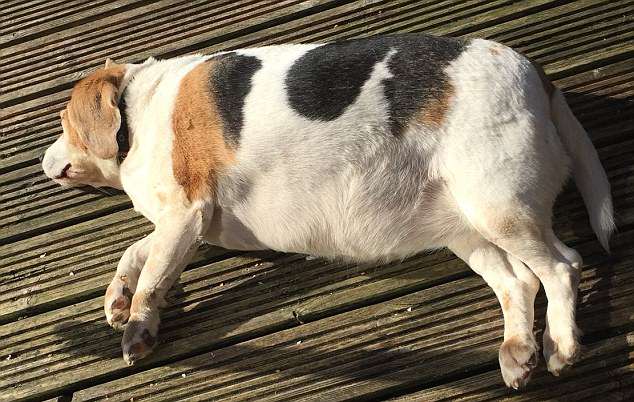 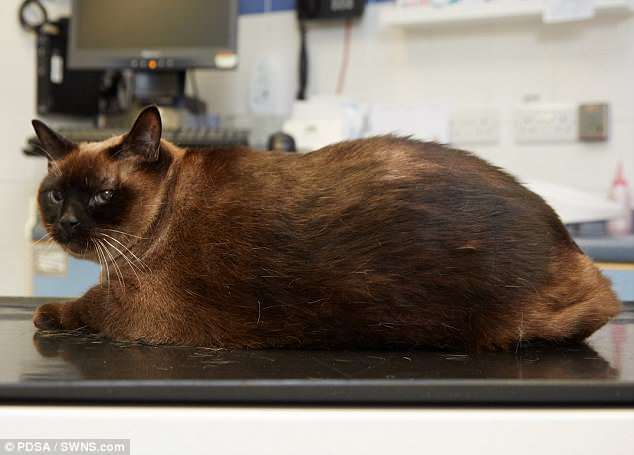 Carole Sweeney, owner of 8.68kg Elvis, says she didn’t realise how big he had had become until comments from family and friends left her ‘all shook up’ 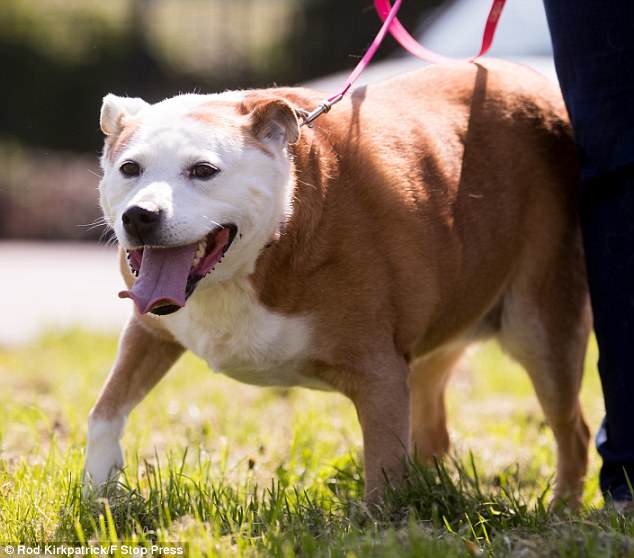 Sasha, a Stafford Bull Terrier cross weighs 27.7kg.  Her owner Sharalyn Slaney said she will eat anything she can get her paws on, including children’s leftovers

And at 11.3kg, five-year-old cat Benji is now so large he can no longer fit through the cat flap.

The 12 robust pets have a staggering combined total weight of 201kg.

PDSA Vet, Olivia Anderson-Nathan, said: ‘Pet obesity is an epidemic that is seriously impacting the lives of millions of pets across the country.

‘As with humans, carrying excess weight has serious health implications for our four-legged friends.

‘It increases the chances of life-limiting and life-threatening conditions such as arthritis, diabetes and heart diseases.

‘With the help of PDSA and Pet Fit Club, these pets and their owners are making the necessary diet, exercise and lifestyle changes to get down to healthier weights.

‘We will support them every step of the way over the next six months to ensure they succeed.’ 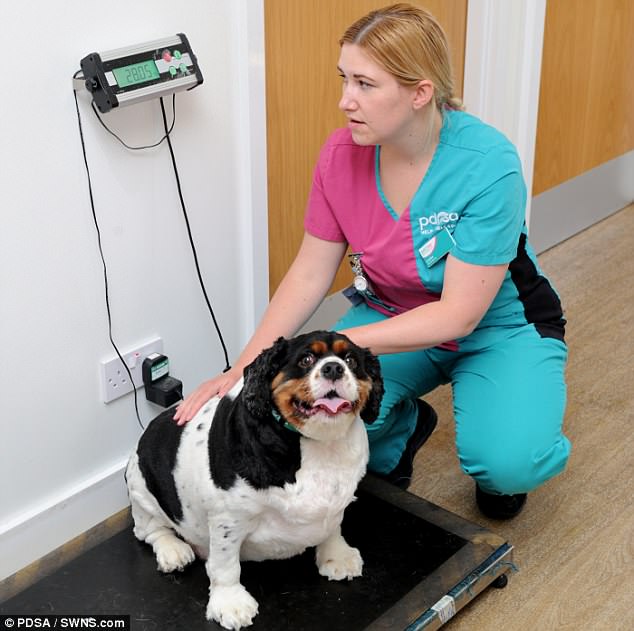 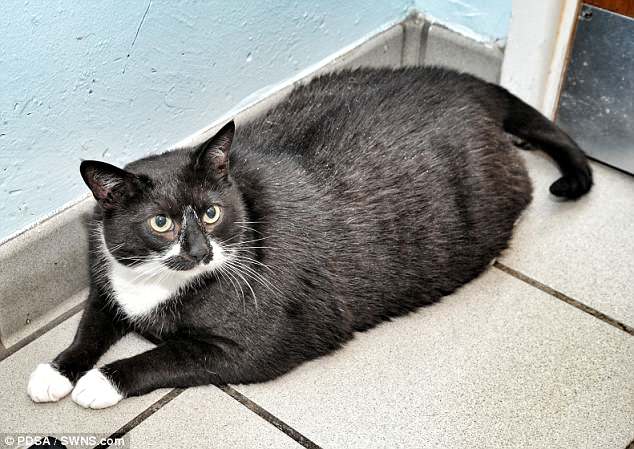 Pepsi Cola, who weighs in at 8.8kg, struggles to groom herself because of her enormous  size 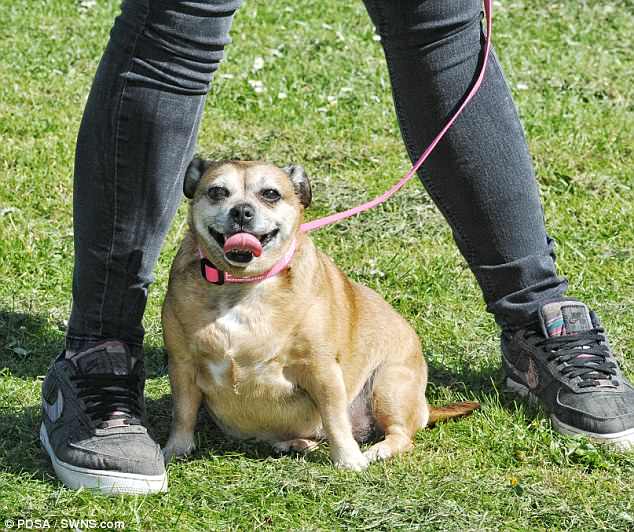 Tia the dog weighs 10.65kg loves cheese and and is owned by Charlotte Horne 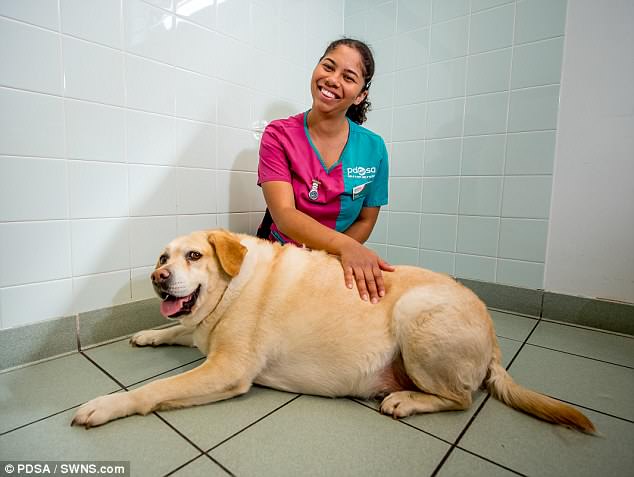 Sadie the labrador weighs 42.2kg, and is owned by George Chaplin, from Grays, Basildon, who said her ‘unrelenting appetite ‘and ‘enjoyment of leftovers’ has led to her sumo size 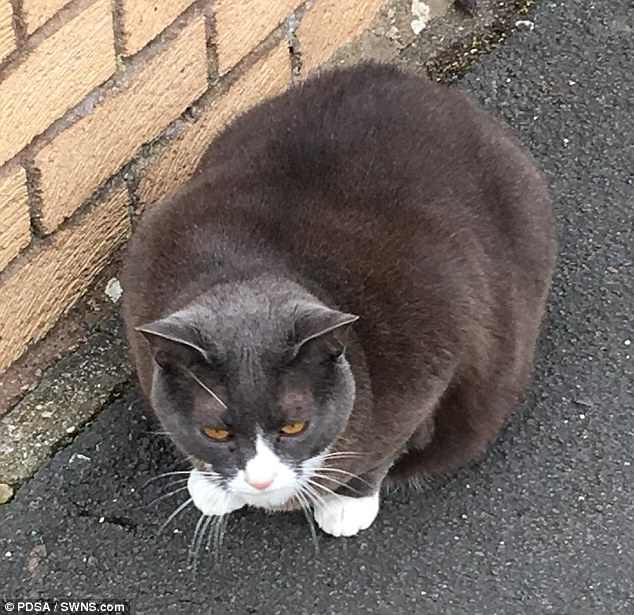 Chester the cat, who weighs in at 7.6kg, loves eating cheesecake and chocolate 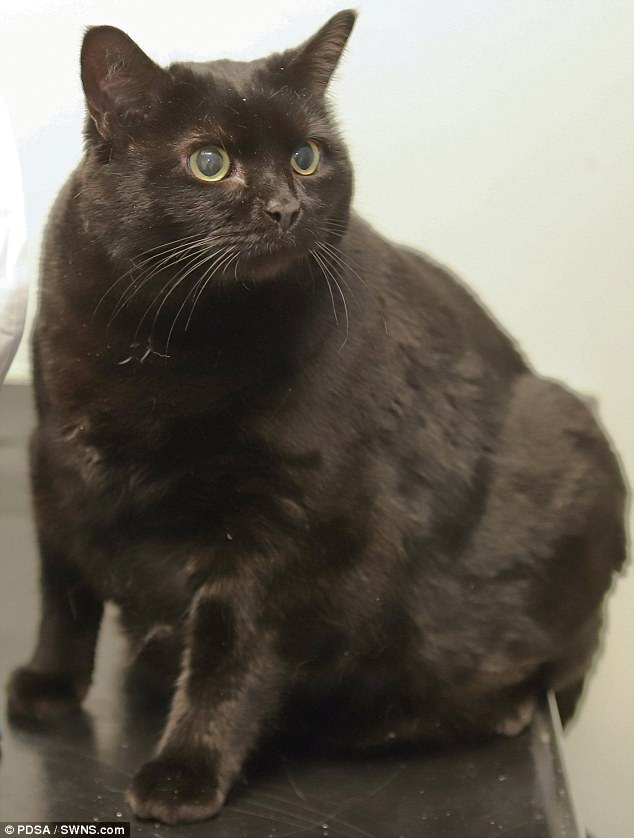 Pen from Southampton is 10.1kg overweight and is unable to jump after piling on the pounds

Olivia added: ‘If owners are worried about their pet’s weight they should seek advice from their local vet or vet nurse.

‘They will make sure pets are on the right type of diet, being fed the correct amount and work with owners to help increase their pet’s exercise levels.’

Pet Fit Club has been running since 2005 and is the biggest of its kind in the UK.

To help them with their weight loss, Pet Fit Club participants receive free diet pet food for the duration of the competition, courtesy of Dechra.

The overall Pet Fit Club winner, crowned at the end of 2018, will win a year’s free pet food, a pet friendly holiday, courtesy of Sykes Cottages, and a pet hamper.

To follow the progress of this year’s finalists, visit www.pdsa.org.uk/petfitclub