A high school athletic trainer accused of sexually assaulting teenage boys in the late 1980s has made the stunning confession that he masturbated them but says it was not sexual and was only ever designed to ‘boost their performance’.

James E. ‘Doc’ Jensen was sued by 18 unnamed victims from Custer County High School in Montana last week for his abuse of them between 1970 and 1998.

The victims are all male and while 18 of them put their names behind the lawsuit, they believe there are another 80 victims who Jensen assaulted.

‘I guess I thought back then when I was doing it, that it was doing for the boys what I said it would do. I’m not so sure now that I look back on it.

‘I guess I thought back then when I was doing it, that it was doing for the boys what I said it would do. I’m not so sure now that I look back on it.

‘There was nothing sexual in it for me,’ he said.

The lawsuit began taking shape last year when he started trying to contact his victims on Facebook to apologize to them.

He has not been charged criminally nor is he likely to face prosecution because none of the crimes happened recently enough.

Jensen claimed that his ‘program’ was based in Chinese medicine and that it would boost the boys’ performance on the football field.

The lawsuit describes how he called it a ’10 step’ program which he said would boost their testosterone.

It began whenever he performed state mandated health checks on the boys.

The lawsuit claims he used to feel their testicles, pretending to be looking for hernias, and then tell them that he had a way to boost their performance naturally. 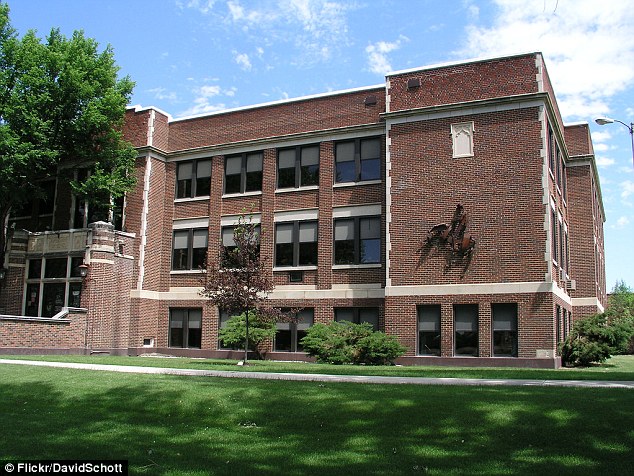 Jensen was the trainer at Custer County High School in Miles City, Montana (pictured). He abused the boys for 28 years, claiming that he was improving their performance through a ‘program’ steeped in ‘Chinese medicine’

If they refused it, he would tell them that their performance would suffer as a result, according to the lawsuit.

Jensen fabricated the boys’ records to make it look as though those receiving the treatment were performing better, it is alleged.

He told the boys that if they mentioned what was happening, they ran the risk of people suspecting them of cheating because their performance was so much better.

The abuse was an open secret among the school’s sporting community, according to the complaint.

Another coach is even accused of laughing about the ‘special massages’ the boys received.

‘At least one of the members of the football coaching staff made multiple inappropriate jokes and comments regarding ‘special massages’ from Jensen,’ the lawsuit states.

Some of the boys nevertheless complained to school district officials but, the lawsuit alleges, they were ignored.

It was not until the late 1990s, when a parent complained about him performing hernia checks when he had no medical qualifications, that he stopped working for the school.

The National Athletic Trainers’ Association revealed on Monday that Jensen was never certified by them to work in schools.

‘He was never certified by the Board of Certification, Inc. (BOC), the national certifying body for athletic trainers. Therefore, he is not, nor has he ever been, an athletic trainer,’ the association told DailyMail.com.

The school and district is yet to respond to the specific allegation that officials turned a blind eye to the abuse.

They also have not commented on the revelation that he was not qualified to even teach at the school in the first place.

A law firm hired issued a statement which said it was reviewing the allegations and was ‘extremely concerned’ about them.

‘We believe that even one child harmed on our watch is not acceptable and will do everything we can to get to the bottom of this situation,’ the statement said.

Some of the victims angrily shot back at Jensen’s comments.

‘That man took advantage on so many levels of so many kids. I’m telling you, I was definitely masturbated by that guy.

‘And, I think it also went to oral sex, that’s what I’m going to therapy to find out. I’ve pushed so many of those memories down so deep,’ he said.

He said Jensen was in denial and was only trying to assuage his own guilt.

‘Every man has to find a way to live with himself. It’s his mind trying to justify a way that he can sleep at night,’ he said.

Daniel Rice, one of the attorneys who corroborated his story, said: ‘I’ve talked to so many of our clients who have been abused anally and/or orally by this guy; what he is saying is untrue.

‘Whatever he is trying to do to make himself feel better about how horribly he abused these kids is totally disingenuous.’