Monty Don has revealed how his ‘frightening’ father struggled with depression and was thought to be suicidal, while his twin sister nearly died in a car accident.

The British gardening expert, 65, based in Herefordshire, opened up about the traumas in his life during a recent interview with The Times.

Monty, who took over as presenter of BBC’s Gardeners’ World from Alan Titchmarsh in 2003, admitted that his mother once asked him to remove the bolt from his father’s gun because she feared he was suicidal.

Monty was a young teenager when his mother Janet feared his army officer father Denis was close to killing himself.

‘I remember thinking, “this is quite heavy”, but doing it. With hindsight I don’t think he would have shot himself,’ the gardener said.

Describing his father as ‘quite a frightening figure’, he recalled that he wasn’t aggressive but that it was a ‘latent’ – with the ‘army heavyweight boxing champion and a commando’ having been through a war.

Monty, who has previously discussed his own battle with depression, said his father would go into deep depressive fits where he would refuse to talk to anyone.

The Gardeners’ World host also spoke about other traumatic incidents in his life, including a car accident that nearly killed his twin sister, Alison, when he was just a young man. 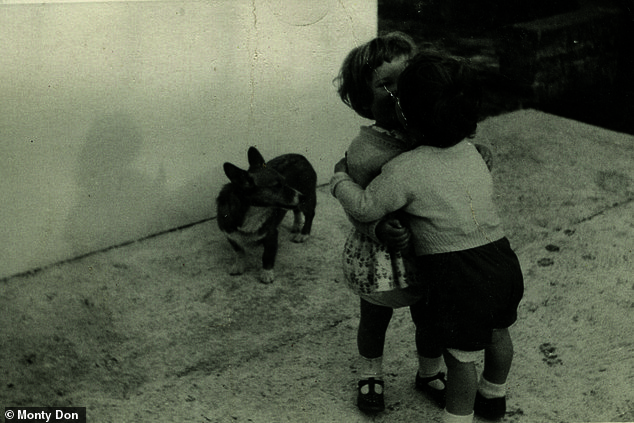 Monty Don and his twin sister Alison, aged two, with their grandmother’s corgi Meg. The Gardeners’ World host also spoke about other traumatic incidents in his life, including a car accident that nearly killed his twin sister, Alison, when he was just a young man

Working as a gardener in France, he received a telegram that said ‘Come home. Alison accident.’

His beloved sibling had been in a vehicle with their brother when it overturned – hitting her on the back of her head, breaking her neck and blinding her.

Making a ‘miraculous’ recovery, Alison retrieved the use of one of her eyes and one hand and could walk with a stick following ‘endless operations’.

Meanwhile, Monty’s mother, Janet, a speech therapist, was ‘neurotic’ but the gardener still enjoyed the rare alone time he had with her.

When he was diagnosed with bone marrow cancer aged just ten, Monty admitted his mother’s undivided attention was a blessing through the process.

‘I had radiotherapy for a year. I really liked that because I had a day off from school and my mother would take me… I liked doing anything with my mother when it was just her and me,’ he recalled.

Elsewhere, having taken over as presenter of Gardeners’ World from Alan Titchmarsh, Monty said the pair still talk and recently discussed how the show takes over your life.