The first Moors Murders victim has been buried for a second time today alongside cherished possessions kept from her family by police for three decades.

Pauline Reade was killed by Ian Brady and Myra Hindley aged 16 in July 1963 and was originally buried in 1987 after her body was found on Saddleworth Moor.

But it was later revealed Greater Manchester Police had kept body parts and items including the muddied white stilettos she was wearing when she died.

It comes as family members have questioned why officers kept her items for so long and say Greater Manchester Police treated them with ‘no respect or consideration’ by ‘bringing back all the pain and emotion’. 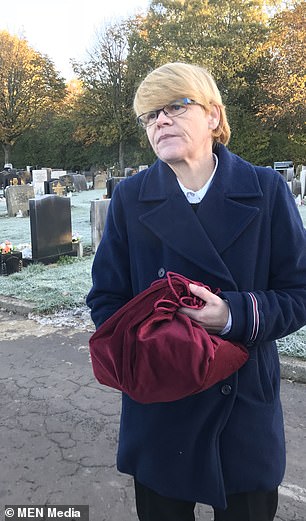 The body of Pauline Reade, left, who was killed by Moors Murderers Ian Brady and Myra Hindley in 1963, has been buried for the second time today after she was reunited with possessions and body parts kept by the police for 30 years, leaving family members including niece Jackie, right, furious 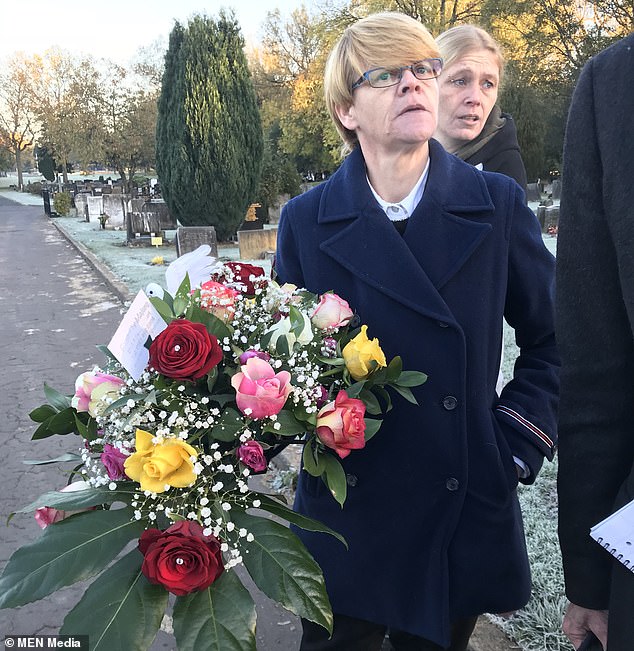 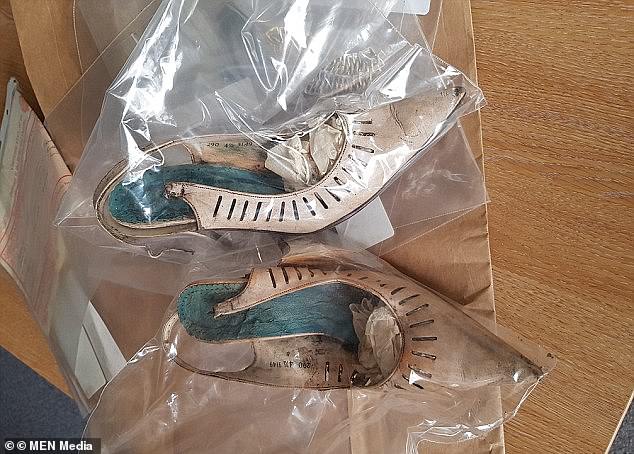 Among the items reunited with her body were the white stiletto heels, pictured, she was wearing on the night of her death

Today her jaw bone and hair samples were reunited with her remains at Gorton Cemetery in east Manchester.

Among the other items reburied with Pauline were a necklace, pendant, a button, and piece of material from her coat.

Jackie Reade, 45, who is Pauline’s niece, who was 13 at the original funeral, criticised the police as she returned to watch her aunt be buried for a second time in the same plot.

Ms Reade said: ‘This last year has been the worst time of my life. I just wanted to put Pauline, finally at rest. We thought she was, then found out the awful truth.

‘Having to do this has brought all the pain and emotion back – including the loss of my dad, Paul, who is buried in that plot.

‘I know Pauline will be at rest, but the answers that I want I can never get. Why they took her body parts and her clothing and why they were kept for so long.

‘The police turned round and said they don’t know. I am fuming that they were retained, no consideration, no respect.’

Ms Reade wasn’t even born when Pauline disappeared, but she was 13 when heraunt’s body was found and remembers her family’s pain. 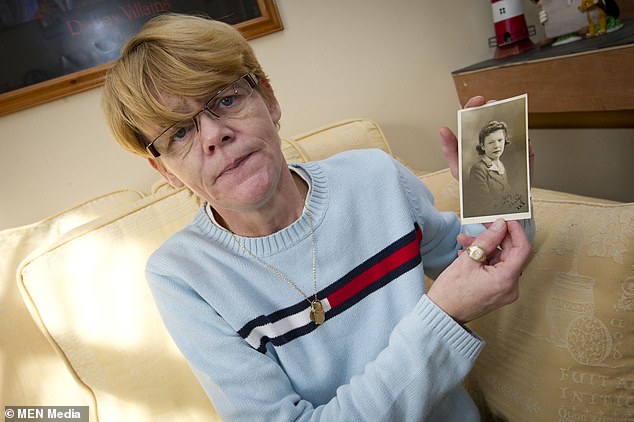 Ms Reade, pictured, said the funeral brought to an end the ‘worst time of her life’ and said she was ‘fuming’ Greater Manchester Police 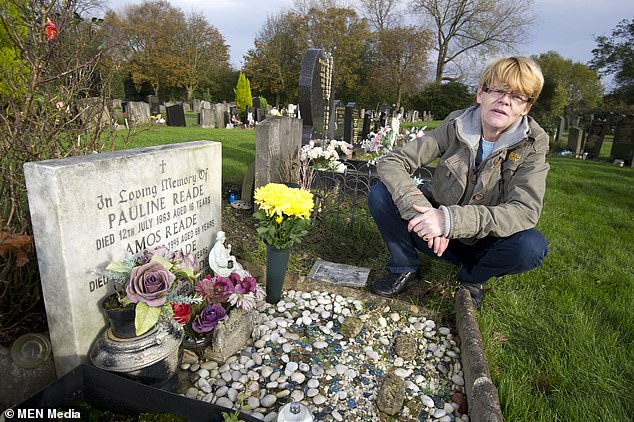 Ms Reade, pictured by her relatives’ burial plot, claimed police treated her family with ‘no consideration or respect’

Each week Jackie went with Pauline’s mother Joan to lay a single rose on her grave.

Ms Reade said: ‘I remember the day they found Pauline’s body. My mam, Linda,told me. I remember saying ‘have they really’ and she said ‘yes’.

‘Then I went straight to my nana’s to make sure it was true. My nana, Joan, said “yes they have found my baby”.

‘We had a cry and put our arms around each other. Grandad Amos was sat in the chair. He never said much, but he showed emotion.

BRADY’S FIVE VICTIMS WERE SNATCHED BEFORE BEING MURDERED

‘He looked, nodded, and there was the start of a tear in his eye, and he said “we have got her back”.

Following the death of Ian Brady in May last year an audit was carried out and some of her remains were discovered at Leeds University where they had been kept on behalf of GMP.

They, along with items of clothing that were returned to the family only this summer, were placed in a velvet bag which Jackie passed to a funeral director at the graveside.

They were put inside Pauline’s casket, which was opened after the bodies of three other family members in the grave were first exhumed.

Pauline’s grave is a family plot and her mother, Joan, father, Amos, and brother, Paul, who all died after her lie in the same place.

To bury Pauline’s remains four licences were required from the Ministry of Justice to move the bodies of all family members.

Ms Reade and other members of her family arrived at Gorton cemetery at around 8am for the emotional ceremony today.

Pauline was Brady and Hindley’s first victim. The pair went on to kill another four children aged 10 to 17.

Her body was not found until 1987 after a three-month search of Saddleworth Moor. It was discovered just inches below the surface in peat, 250 yards from a main road on July 1.

Today Ms Reade was laying multi-coloured roses on the grave after all fourbodies were placed back in the plot.

She said: ‘My nana and I used to lay red ones because she used to have rose bushes in her back garden, and she would clip some off for the grave.’

Peter Hall, head of civil litigation for Tranters Solicitors of Stockport, who has represented Jackie, said: ‘In September 2017 the police wrote to the family indicating that they had body samples relating to Pauline Reade.

‘When the body parts were returned in November 2017 we requested return of Pauline’s shoes and jewellery. 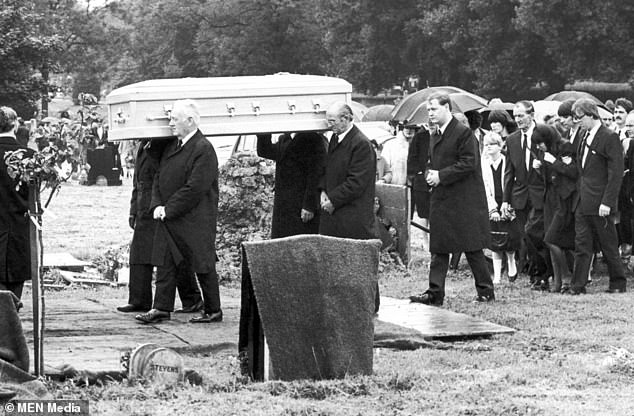 The original funeral too place in 1987, pictured, after the discovery of Pauline’s body in a shallow grave 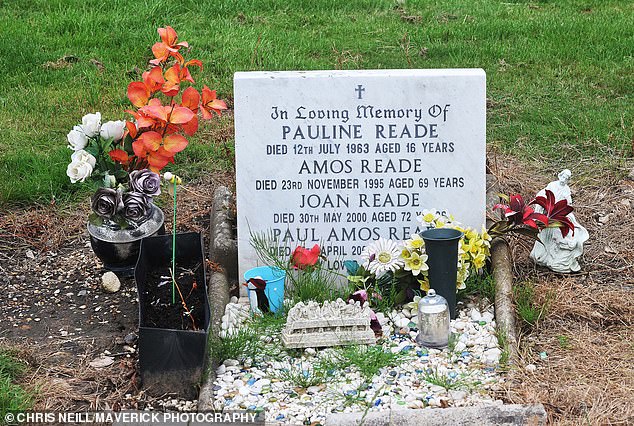 Pauline was laid to rest in the same burial plot, pictured, alongside the cherished items and body parts, including hair samples

‘The effect was to prolong the distress to the family in what has proven to be a very unwelcome reminder of the upsetting circumstances of Pauline’s death.

‘There has been no proper explanation from GMP who would have cooperated with the police human tissue audit between 2010 and 2012.

‘That audit should have identified the human tissue relating to Pauline. So the return of the body samples and personal items seems to be connected with other matters and the only significant recent event was Brady’s death in May 2017.

‘This prompts a further question – why was that individual, if he had not done enough already, allowed by GMP to cause further misery to the family of Pauline Reade?’

Greater Manchester Police has paid for the cost of the exhumation and reburial of the bodies.

The force said last year it had become aware that human tissue belonging to Pauline had been stored in external premises on behalf of GMP.

The samples, they said, were originally held for investigative purposes.

Martin Bottomley, head of GMP’s Cold Case Unit said: ‘This is a deeply sensitive matter and understandably it has caused some upset with the family however, we felt contacting them was the right thing to do and we have given them a number of options, all of which GMP will pay for.

‘The Moors Murders was one of the most evil acts that happened in this country in the 20th century and although those responsible were brought to justice, we will continue to provide support to the families of the victims in any way that we can.’

The sadistic crimes of Ian Brady and Myra Hindley shocked the nation to its core.

Across Britain there was an outpouring of loathing for the pair who snatched children off the street, sexually abused them and tortured them to death.

Their first victim was 16-year-old Pauline Reade, who vanished on July 12 1963, on her way to a disco near her home in Gorton, Manchester.

She was lured to the moors by Hindley who said she had lost her gloves there and needed help finding them.

It was two decades later when Pauline’s grieving parents discovered exactly what had happened to her. 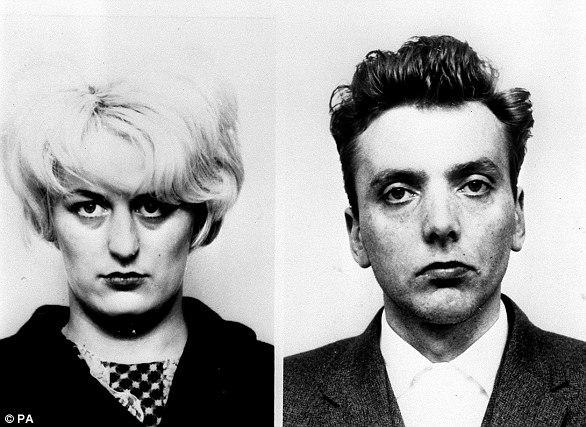 Her body was discovered in 1987 after the murderers confessed to the killing.

They were taken to bleak Saddleworth Moor where they located the shallow grave dug over 20 years before.

Pauline was still wearing her pink and gold party dress and blue coat.

Brady had beaten her about the head and cut her throat with such force that her spinal cord was severed.

Pathologists said it was impossible to say whether Brady had sexually assaulted her.

In the shadow of the presidential assassination little attention was paid to the disappearance of the Manchester boy.

John was lured on to the moor where he was sexually assaulted and murdered.

Brady took a photograph of Hindley standing on the edge of his grave holding her pet dog. The photograph would later lead police to the young boy’s resting place.

The body of the third victim, Keith Bennett, 12, has never been found.

Keith died after leaving his home in Chorlton-on-Medlock in Manchester on June 16 1964.

Police mounted an intensive search of the moor in 1986 amid reports that the pair had confessed to his murder.

But even though Brady and Hindley were both permitted to travel to the moor to try to remember where the boy’s remains were, they were not found.

It was Brady and Hindley’s next killing that sealed their reputation for pure wickedness – the murder of 10-year-old Lesley Ann Downey on Boxing Day in 1964.

She became their youngest victim when she was lured from a fairground to the house Hindley shared with her grandmother in Hattersley.

Brady stripped, sexually abused and tortured her, forcing her to pose for pornographic photographs.

Her last moments were recorded on a harrowing 16-minute, 21-second audio tape. 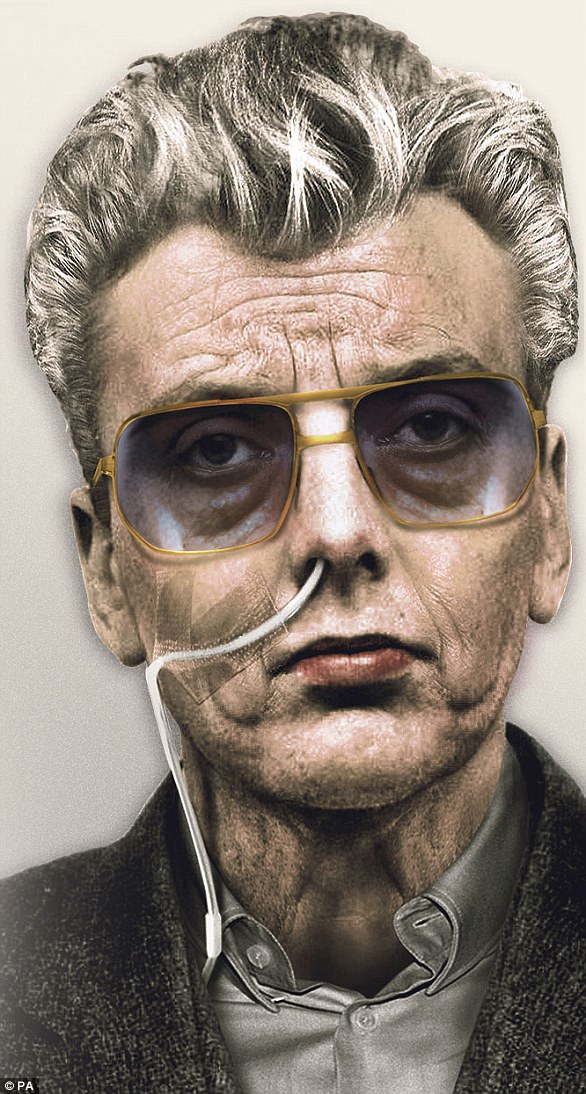 The terrified girl begged for mercy, called out for her mother and appealed to God for help before her voice was stifled forever.

The tape was recorded at the house in Wardle Brook Avenue, Hattersley, as Lesley Ann pleaded with them ‘Please God, help me’ and ‘Don’t undress me, will you?’

Her cries reduced the judge, jury, courtroom spectators and even hardened police officers to tears.

John Stalker, former deputy chief constable of Greater Manchester, who was then a detective sergeant, expressed the feelings of many in the courtroom when he said: ‘Nothing in criminal behaviour before or since has penetrated my heart with quite the same paralysing intensity.’

Detectives could not say exactly how Lesley Ann died. Her body was dug up naked except for shoes and socks.

Had the pair not made a crucial blunder in involving Hindley’s brother-in-law David Smith in their next enterprise, the murder of Edward Evans, 17, might not have been their last.

Edward was lured from a gay bar to a home then shared by Hindley and Brady on the Hattersley estate at Hyde.

Smith was summoned to the house by a phone call on a false pretext.

He was then forced to watch as Brady attacked Evans with an axe, smothered him with a cushion and completed his grim task with an electrical cable.

Shocked, Smith helped the pair carry the trussed-up body into a bedroom. He then fled terrified and called the police.

The next morning police searched the house, and began unravelling the gruesome evidence of Brady and Hindley’s appalling crimes.

Brady was 28 in May 1966 when he and Hindley were convicted of murdering Lesley Ann and Edward.

He was also convicted of the murder of John Kilbride and received three life sentences to run concurrently.

In 1987 Brady finally confessed to the murders of Pauline Reade and Keith Bennett but he was never tried for the crimes.

Hindley died in prison in 2002, while Brady died of cancer and at a secure mental health hospital in May 2017.