Spot a moose, spot a moose! Majestic mammal is seen in Washington’s Mount Rainier National Park for the first time – 350 miles south of where they are usually found

The animal was walking alone through the snow along Sunrise Road and park officials shared a photograph of the mammal on Facebook.

Moose are considered a priority species by Washington’s Department of Fish and Wildlife (WDFW), which means they require special conservation techniques to protect them.

That conservation is required because of a species’ population status, sensitivity to habitat alteration and/or recreational, tribal or commercial importance.

According to the WDFW, as of 2015 there were an estimated 5,000 moose in Washington, most of which are in the Selkirk Mountains – more than 350 miles north of Mount Rainier.

‘This is the first recorded moose sighting from within Mount Rainier National Park and southwestern Washington,’ the post’s caption said.

‘Yes, I know that’s a lot of exclamation points, but we are really excited about this sighting!’

There are smaller populations of moose in the north Cascades, Okanogan and Blue Mountains.

Moose tend to be more solitary mammals, but they can sometimes travel in small groups in the winter if they are sharing a favorable habitat.

Officials also wondered in the post if this newly observed moose could be the same one that was seen near the I-90 wildlife undercrossing at Resort Creek in August.

That location is about 250 miles from the area near Mount Rainier.

However, moose have expanded their geographic range in some states, but most areas include cold winters with snow cover – thanks in part to their large bodies that prefer temperatures below 60 degrees Fahrenheit in summer and below 32 degrees in winter.

They have prominent muzzles with an overhanging upper lip, and a large flap of hair-covered skin that hangs beneath the throat called a ‘bell.’

Their antler spread ranges from 35–45 inches and rarely exceeds 55 inches across.

The majestic mammals, which are known as elk outside of North America, feed on large amounts of leaves, bugs, twigs and aquatic vegetation. 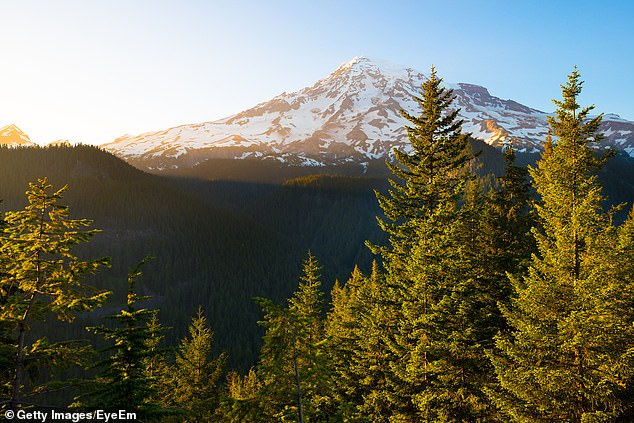