A brazen moped gang wearing helmets and dressed in all black tried to remove a TV camera from a bridge using an angle grinder in the middle of rush hour traffic.

The gang were filmed on Putney Bridge in London as they tried to cut the camera down, with a witness saying they blocked an entire lane of traffic during the attempt.

Metropolitan Police confirmed they received dozens of calls at around 5:06pm today about the incident but the men had left the scene before officers arrived.

One witness, 41, who asked not to be named, told Mail Online that he thought ‘it was going to be another attack’.

He described the moment three mopeds, with two masked men on each, rode up to what appeared to be a camera on the side of Putney Bridge.

He said: ‘There were three scooters, two people on each. One blocked a bus and acted as a lookout while the other two went to the side of the bridge.

‘I thought “What on Earth are they doing?” They were trying to cut something off it looked like. I thought it was going to be another attack.’

This is the moment a brazen moped gang tried to cut free a TV camera from Putney Bridge, above the Thames, in the middle of rush hour

The incident only lasted around a minute as the raiders quickly gave up when they realised the angle grinder couldn’t cut the camera loose.

The brazen attempt was in front of several people, taking place in the middle of the rush hour.

The witness said he was worried for his safety when the man with the angle grinder, who was the last to leave the camera, rode past.

He said: ‘I saw the angle grinder. He was the last one to leave. I was worried they’d chop my hand off or something when they saw the camera.’

The witness said he reported the shocking incident to the police. 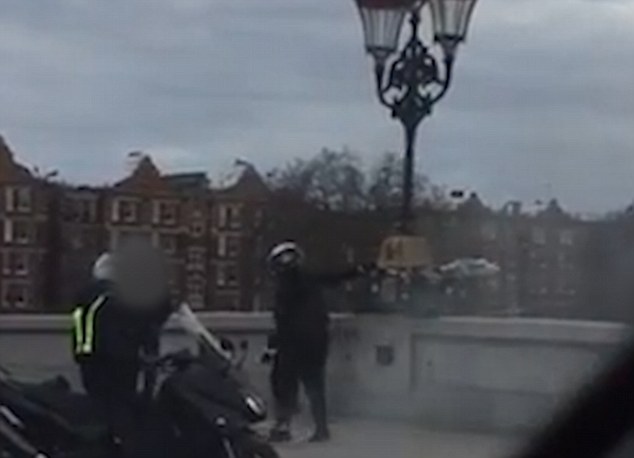 The gang used three mopeds, with six members wearing helmets and dressed in all black for the attempt

He also claimed that he later saw the man with the angle grinder riding down the bridge while waving the tool around near passing motorists.

In a statement, the Metropolitan police confirmed that they were investigated the attempt theft.

A spokesperson said: ‘Police received a number of calls at around 1706hrs on Thursday, 22 March reporting that a group of approximately five males on three mopeds were attempting to remove a camera using an angle grinder on Putney Bridge.

‘The suspects left the scene prior to police arrival. Attempts to remove the camera were unsuccessful.

‘Officers from Wandsworth Police are investigating. No arrests. Enquiries are ongoing.’ 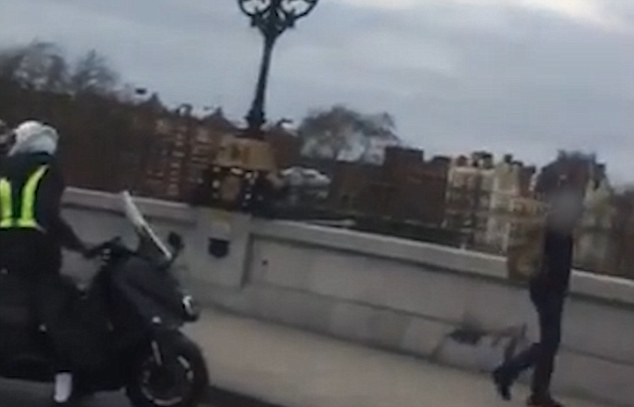 However, they fled the scene after realising that the camera couldn’t be cut down, with the incident lasting barely a minute