A morbidly obese man who weighed a staggering 320 kilos after living off fast food has dramatically shed more than 60 per cent of his body mass in just 12 months.

Andrew Zed, from Sydney, fell into a spiral of ‘depression eating’ after his fruit and vegetable business collapsed eight years ago before his marriage broke down.

At his heaviest, the 41-year-old said he was required to book two first class seats on a flight for $21,000, he couldn’t fit into any regular car, and no restaurants could accommodate him because they didn’t have any chairs to hold up his large frame.

The former business owner said his turning point came after his doctor made a shocking admission his ‘oncoming death’ would see him covered with bedsores.

Determined to lose his weight once and for all, Mr Zed dropped 201 kilos without surgery after overhauling his diet by ditching mammoth meal portions and soft drinks – and he found love again along the way.

Before and after: Andrew Zed weighed a staggering 320 kilos (left) after living off fast food. But he dramatically shed more than 60 per cent of his body mass (right) in just 12 months 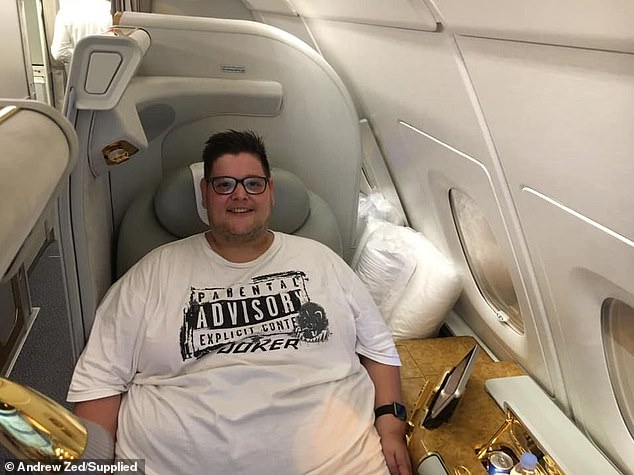 The 41-year-old (pictured at 265 kilos after losing 55 kilos so he could be successfully flown on a plane to Thailand) said he was required to book two first class seats on a flight for $21,000 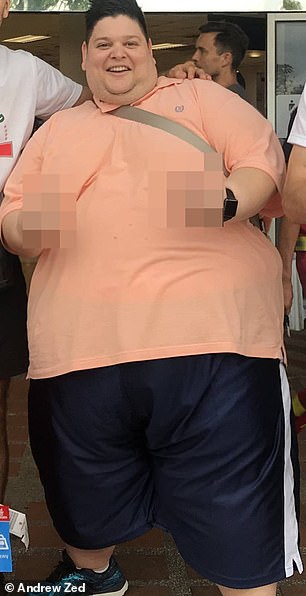 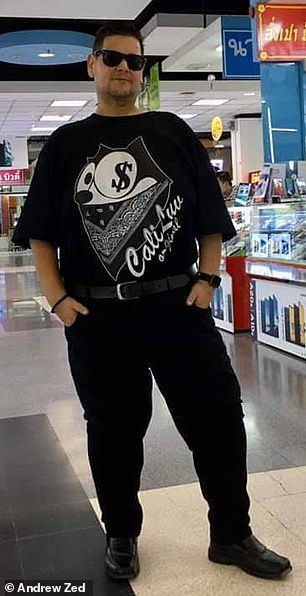 The former business owner (pictured left at 320kg and right at 119kg) fell into a spiral of ‘depression eating’ after his fruit and vegetable business collapsed eight years ago before his marriage broke down. But he has since turned his life around, slimming down to just 119kg

Andrew’s day on a plate before weight loss

AFTERNOON TEA: Half a litre of gelato ice cream

DINNER: Another round of pizza, big bowl of pasta, whole chicken, chips and Greek yeros wrap

‘My doctor said I’d be bedridden within a year, I was practically that already and once that happens it’s more or less over and I’ll die with bedsores all over me,’ Mr Zed told Daily Mail Australia.

‘Nothing I’ve ever heard had frightened me as much as dying covered in bedsores.’

‘To call it sedentary is an overstatement. I basically became a hermit. I worked from home on the phone in sales, and when that became too much of a chore I just ate and slept… All I did was order fast food non-stop day and night and play video games,’ he said.

‘At my largest, you could throw the Lowes ‘Big Man’ catalogue away. Everything I wore had to be custom made but I wasn’t exactly going out much. Most of the time I wrapped myself up in a King-sized bed sheet.’ 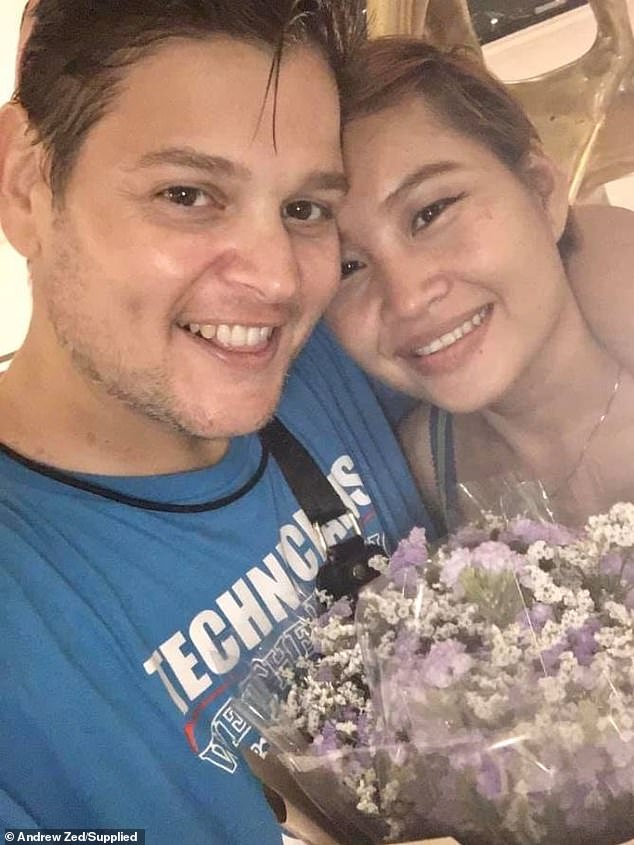 Following his incredible body transformation, Mr Zed has found love again (pictured with his now-fiancée Tangmo – and they are set to get married in the year ahead) 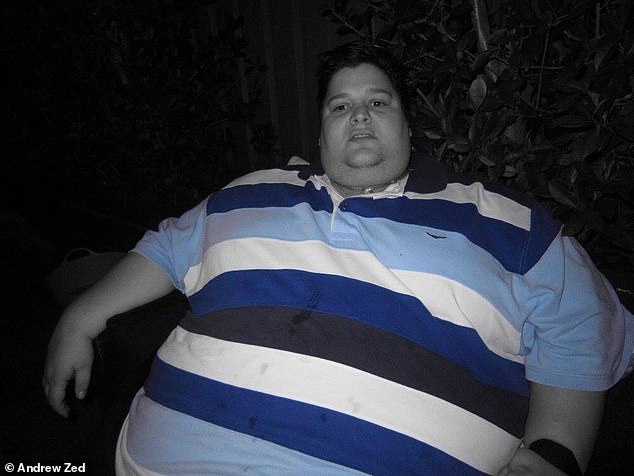 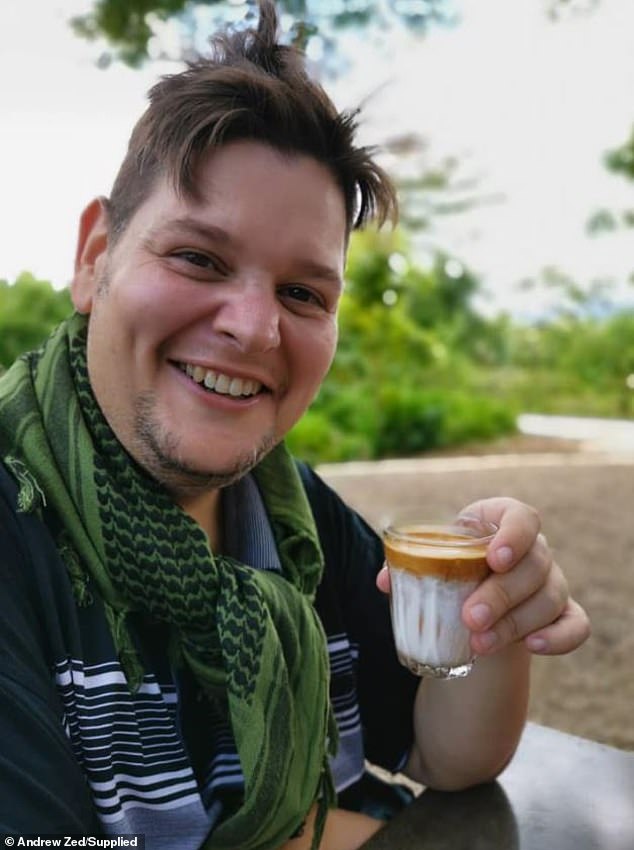 Determined to lose his weight once and for all, Mr Zed dropped a massive 201 kilos after overhauling his diet by ditching fast food, mammoth meal portions and soft drinks

In 2011, Andrew Zed tipped the scales at 140 kilos – before he fell into a spiral of ‘depression eating’ after his business collapsed

His weight spiralled out of control, leading to a staggering 260 kilos

But shortly after his marriage ended, his weight ballooned to 320 kilos

Within two years, he was unable to leave his granny flat at the rear of his mother’s house

His turning point came after his doctor intervened, giving him a very dire warning that his ‘oncoming death was likely going to be very unpleasant’, covered with bedsores

Determined to get on top of his weight once and for all, he shed 55 kilos

In August 2018, he travelled to Thailand to join the Weight Loss For Men, weighing 265 kilos

Within 12 months, the 41-year-old slimmed down to just 119 kilos – after losing a whopping 201 kilos by overhauling his diet

As his weight continued to pile on, Mr Zed said he went from 140 kilos to a whopping 260 kilos after he lost his business eight years ago, before he went bankrupt.

After his marriage ended, Mr Zed ballooned to 320 kilos.

‘I was left feeling lonely and hopeless to the point I accepted suicide by food. Food was the other love that would never leave me,’ he said.

He said he was gorging on large portions of food throughout the day, including several rounds of pizzas, whole chickens, garlic bread and pasta – and he would wash it all down with litres of soft drinks.

‘Nothing was off the menu, but I did love whole chickens, pizzas and Greek yeros wrap. There was no limit to the amount of ice cream I could put away too,’ he said.

His weight skyrocketed to a massive 320 kilos until his family’s doctor intervened.

His turning point to lose weight came after he was given a very dire warning from the doctor: ‘My oncoming death was likely going to be very unpleasant.

‘My peak weight was a very dark time. There was a period when I did come close to throwing it all in.’ 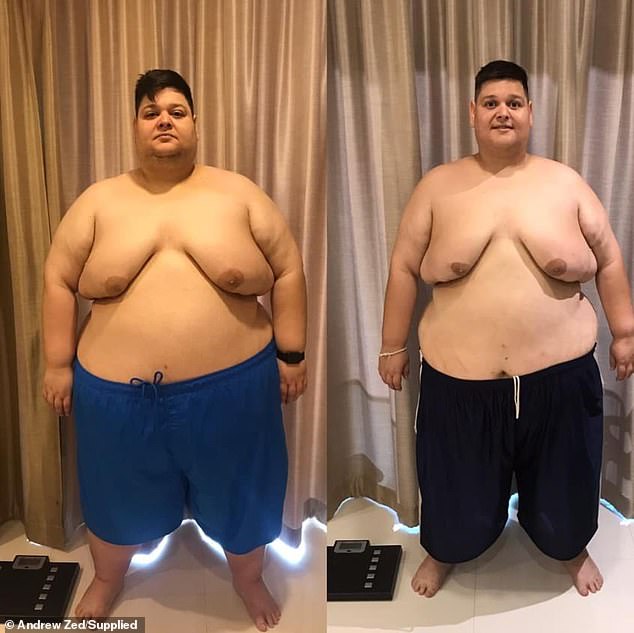 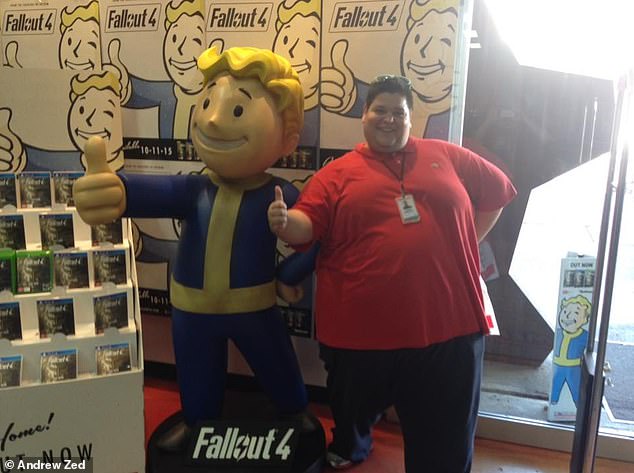 As his weight continued to pile on, Mr Zed said he went from 140 kilos to a whopping 260 kilos after he lost his business eight years ago, before he went bankrupt (pictured at his heaviest) 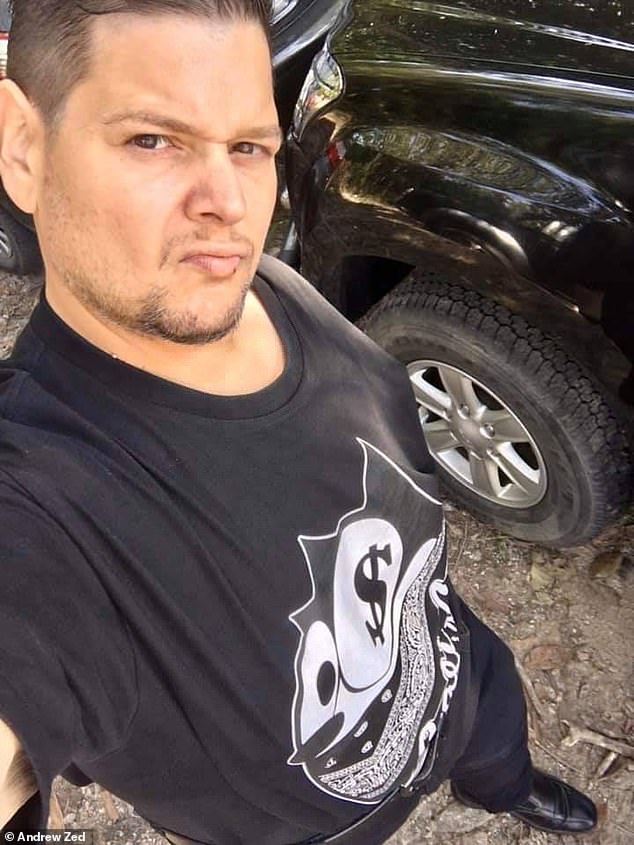 Andrew’s healthy day on a plate

After his doctor suggested he should get out of his ‘regular environment’, Mr Zed stumbled across Weight Loss For Men Thailand, a program designed for obese men who are at risk of injury in more conventional fitness boot camp settings.

‘It was a men-only weight loss treatment program and it definitely seemed that getting out of my environment was the only option and it had to be done as soon as possible,’ he said.

‘I was able to tap into my superannuation funds under compassionate medical grounds thankfully.’

After being accepted into the program, he was given a nutrition program to follow for two months so he could lose enough weight to be successfully flown to Thailand.

Upon arriving in Chiang Mai in August 2018, Mr Zed tipped the scales at 265 kilos.

‘Food, not exercise was the key. Exercise is for health but it doesn’t necessarily help you lose weight. What I learned was that you need to get your food landscape under control if you are serious about weight loss,’ he said. 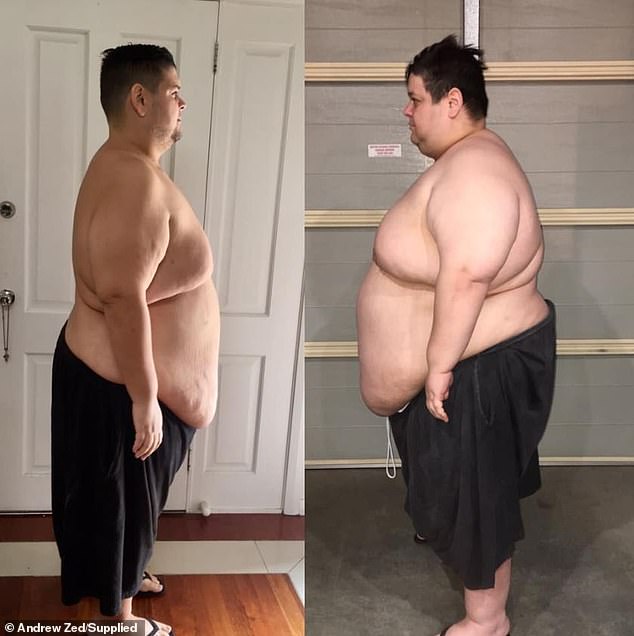 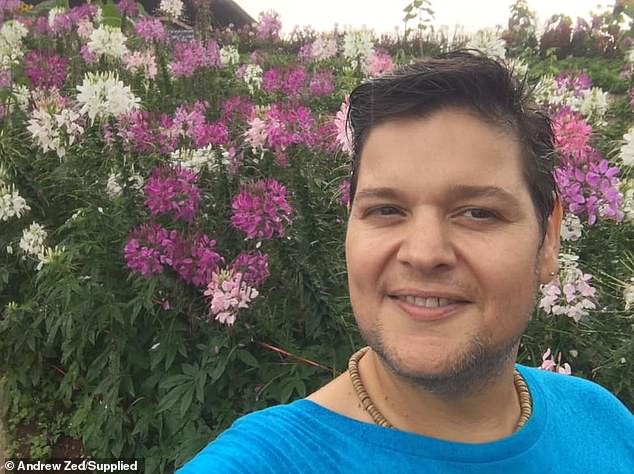 During the one-year weight loss program, Mr Zed said he learned how to dramatically change his unhealthy eating habits, while feeling like he was on a holiday 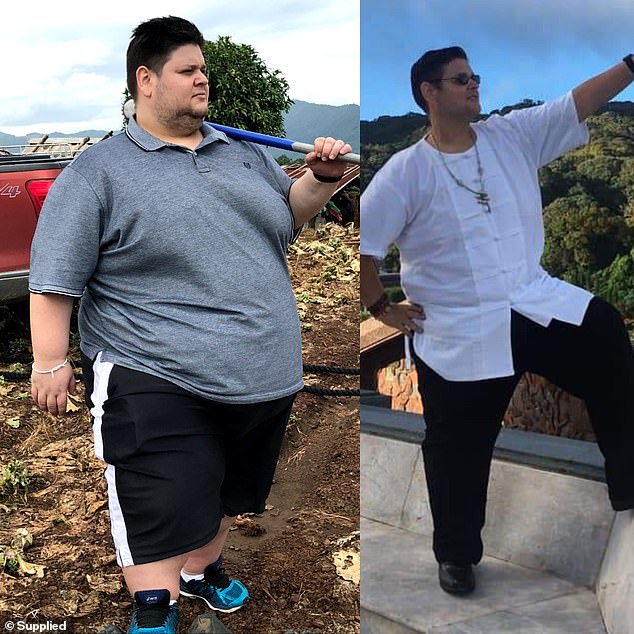 Before and after: His daily diet consisted of croissants, pizzas, whole chickens, garlic bread, fries, ribs, pasta, and litres of soft drink. Now he only eats fruits, salad, meats and vegetables

‘The best weight loss results are achieved when the body and mind are physically and mentally stress free. Along with diet remediation (which varies from person to person) this is the core of what we do,’ Mr Smith said.

During the one-year program, Mr Zed said he learned how to dramatically change his unhealthy eating habits, while feeling like he was on a ‘holiday’.

‘They made sure I had plenty of rest… I sat around the pool, I read books, I watched Netflix, I went sightseeing and I ate the most amazing food I had ever eaten in my life all while losing weight. And I don’t mean a little bit of weight, a lot of weight,’ he said.

After his 12-month stint in Thailand, he shed 201 kilos without marathon workout sessions – and now he feels happier and healthier more than ever, as he enjoys a new lease of life after finding love again.

‘I’m still sometimes shocked when I catch my reflection. It has happened so fast. It takes some getting used to,’ Mr Zed said.

‘But yes, beyond the appearance side of things, everything else is just incredible. I have a normal life. I drive a car. I have a fiancée. I have so much energy now and I just want to get out there and make up for all the time I lost.’ 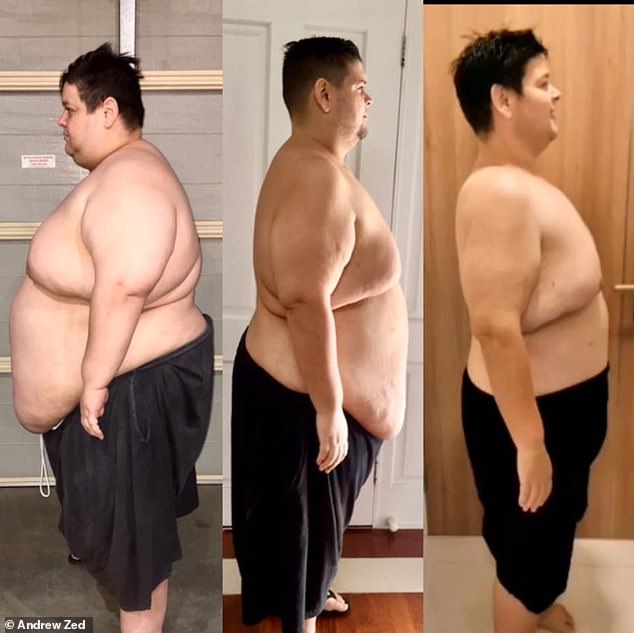 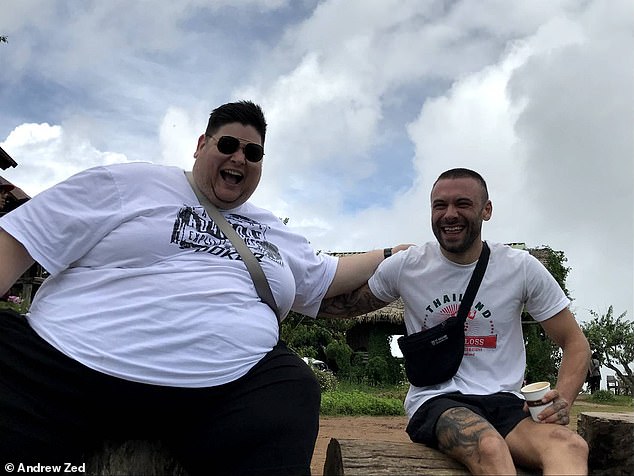 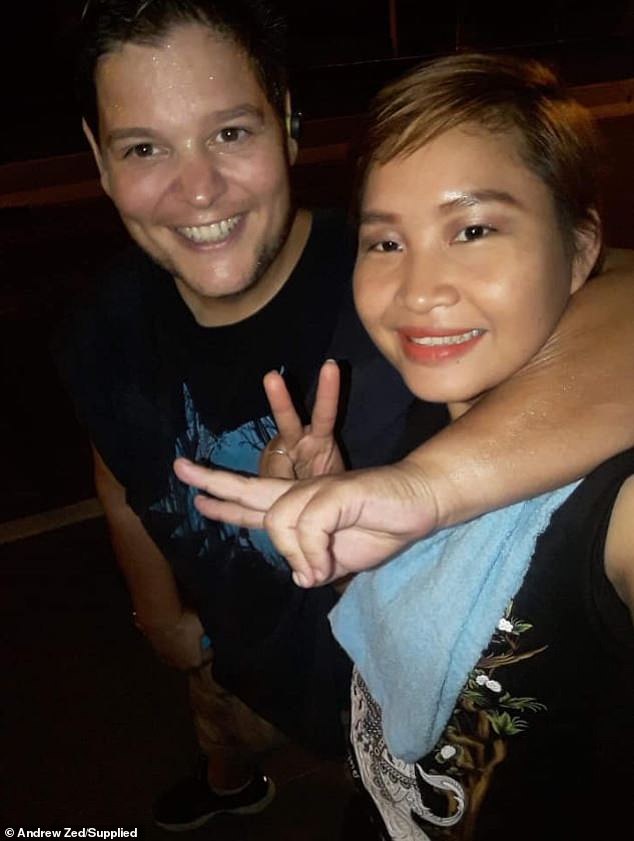 After 12 months, he shed 201 kilos – and now he feels happier more than ever, and he’s enjoying a new lease of life after finding love again with his now-fiancée Tangmo (right)

‘My diet is pretty varied. The key for me is just eating properly. Even at my biggest I knew what that meant, I just didn’t know how to do it,’ he said.

‘I steer clear of junk food and I’ve knocked soft drinks on the head. Give me a good cup of green tea and I’m happy.’

When looking at old pictures of himself, Mr Zed said: ‘I feel a bit sad for that bloke. But I’m not him anymore. I’m only interested in the present and the future.’

For anyone who’s keen to lose weight but don’t know where to start, Mr Zed – who now weighs 119 kilos – said: ‘It is never too late. Do it now.

‘Losing the weight gave me the confidence to go out and start dating. I met Tangmo and we are set to get married in the year ahead.

‘I never thought that I could ever turn my life around the way I did and so easily. Now that I’m back in Sydney with my fiancée.

‘My ultimate goal is 85 kilos and when I reach that I plan on having surgery to remove the acres of loose skin that I have which will complete my transformation.’