More girls than boys win a place at Oxford University

More women than men have won the chance to study at Oxford for the first time in recent history.

Figures released today finally reflect the success of female pupils who have repeatedly soared ahead of boys in exam results.

Girls have for a long time outperformed male classmates at GCSE in terms of A* to C grades.

But this is the first time in years that this has translated into a lead in Oxford admissions.

Latest figures show 1,275 British women were given offers to go to the university this year compared with 1,165 men. Of those, 1,070 female pupils took up their place while 1,025 males did so, said admissions body Ucas, whose figures cover home-grown students.

Latest figures show 1,275 British women were given offers to go to Oxford University this year compared with 1,165 men

This year’s results are surprising since 5,360 men applied to Oxford compared to 5,245 women, a continuation of a long-term trend.

A university spokesman hailed the statistics as a positive step for gender equality.

He said: ‘We can’t say for certain whether this is the first time in history that Oxford has let in more women than men.

‘While it’s too early to call this a trend, it is a welcome sign of progress for female applicants.’

Dr Samina Khan, director of undergraduate admissions and outreach, said: ‘It is a welcome sign of progress for female applicants to Oxford and we will continue to aim for gender parity when it comes to admission.’

According to university statistics, this is the first time women have been ahead in getting offers in at least a decade. Data going back to 2007 shows men have received more offers than women in every previous year.

Ucas records began in 2012 when 100 more men were given offers than women.

Since then, offers to women have risen by six per cent and those to men have fallen by 11 per cent.

But at Cambridge men are still ahead with 1,440 getting offers compared with 1,405 women, said Ucas.

At Oxford, the first women’s colleges began in the 19th century but only became full members of the university in 1920. 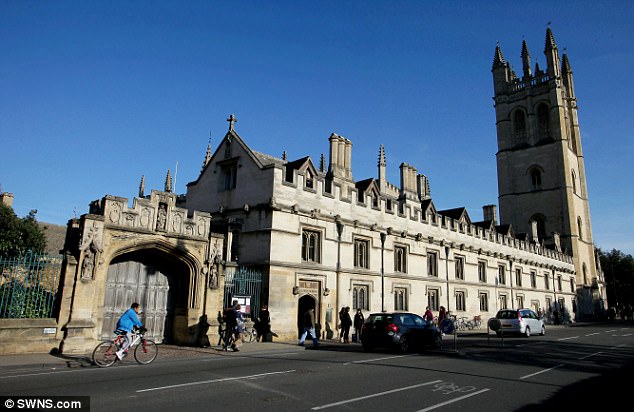 Of those, 1,070 female pupils took up their place while 1,025 males did so, said admissions body Ucas, whose figures cover home-grown students

A quota on the number of female students was abolished in 1957 and from the 1970s all-male colleges moved towards admitting women.

An early woman student was Emily Wilding Davison, the suffragette killed in 1913 when she ran in front of the King’s horse at the Epsom Derby.