Unions heaped yet more misery on rail passengers yesterday by ordering a fresh wave of industrial action – extending their disruption of services to the 49th strike in a row.

Members of the Rail, Maritime and Transport union (RMT) working on Northern Rail routes across England had already planned to down tools tomorrow and next Saturday, as part of their long-running dispute over driver-only trains.

Yesterday they announced further 24-hour strikes to be held on the first three Saturdays of February – adding the 47th, 48th and 49th days.

Beleaguered passengers are set for more misery as rail workers plot a fresh round of strikes next month in the long-running dispute over guards on trains. Members of the Rail, Maritime and Transport union (RMT) on Arriva Rail North are already striking on Saturday and on January 26

Northern, which is run by Arriva, said only a handful of services will run after 5pm on those Saturday evenings, causing serious disruption for shoppers and sports fans. The weekend strikes have been disrupting services on Northern Rail since last August.

Mick Cash, general secretary of the RMT, claimed Northern was ‘not interested’ in talking to them to try to resolve the two-year dispute. Staff are protesting over the firm’s decision to remove guards from services. Unions say the move compromises passenger safety, especially on commuter routes.

‘RMT continues to make every effort to get serious and meaningful talks going with Northern but the company are not interested,’ Mr Cash said.

‘Northern Rail have made it perfectly clear in emails to staff that they want to run trains without a safety critical guard on board in a move that would wreck both safety and access to services. They should listen to their staff and pull back from that plan immediately.’

Mr Cash said tomorrow’s strike, the 45th consecutive Saturday of disruption, would again be supported ‘solidly’ by RMT members. According to the most recent figures, train punctuality slumped to a 13-year low after chaos caused by new timetables and engineering works last year.

Nearly 15 per cent of trains – one in seven – fell short of the public performance measure (PPM), the industry’s standard measure of punctuality.

At the same time, passengers are paying higher fares, with tickets increasing by 3.1 per cent on average this month. That equates to more than £100 on season tickets from Manchester to Liverpool , with others facing rises of above £200 from more distant stations. 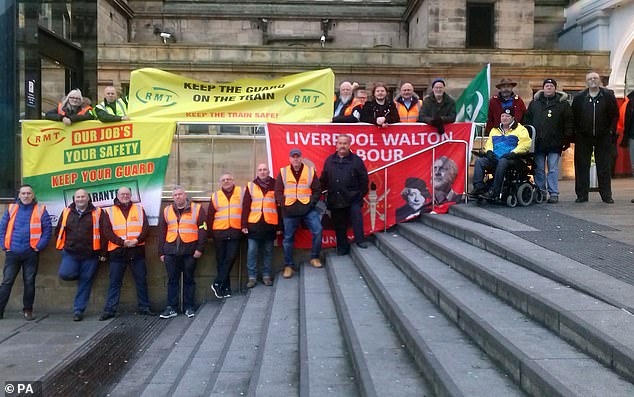 Northern, which covers the North West and North East regions of England, has been beset by punctuality problems and customer service issues and ridiculed for its use of two-car Pacer trains built in the 1970s.

David Brown, managing director at Northern, defended the firm’s decision to press ahead with removing guards from their services. ‘More than 50 per cent of all rail journeys in the UK are made on driver-controlled trains,’ he said. ‘Recently the Department for Transport and Transport for the North publicly confirmed that a second person – in addition to the driver – would be retained on Northern services.

He said there was no reason for the RMT to continue its ‘disruptive and economically damaging strikes’, but despite this, the RMT was continuing with strike action.

‘We expect all of our services on Saturdays in January to be extremely busy and are calling on our customers to plan their travel carefully for the coming weekend,’ he added. ‘Check the new timetables well in advance, and make sure they do not rely on the last trains home.’