Australian police are alert to the threat of violence at Hong Kong pro-democracy rallies on Sunday after angry confrontations by pro-Chinese counter-demonstrators in Sydney and Melbourne over the past two days.

Thousands of people took part in rallies across Australia on Friday and Saturday, including supporters of China, as demonstrations continue overseas.

Several scuffles broke out between pro-Hong Kong and pro-Beijing groups in Melbourne on Friday night, while there were at least two clashes in Sydney on Saturday.

A man carrying a Taiwanese flag was confronted by an anti-democracy rally attendee near Sydney’s Town Hall. He was seen being grabbed around the neck before falling to the ground.

During the protest, an elderly man holding a sign supporting freedom in Hong Kong was surrounded and called a traitor by pro-China protesters, the Sydney Morning Herald newspaper reported.

‘He’s being protected by the police, otherwise we’d beat him to death,’ a woman said in Mandarin.

Earlier, as up to 3000 people marched from Belmore Park to the CBD, a lone pro-Hong Kong supporter had to be escorted by police ‘to prevent a breach of peace’.

A video posted to social media by NewsCorp finance editor Frank Chung showed Chinese students at a protest at the University of South Australia in Adelaide, chanting ‘Cao ni ma bi’ or ‘F*** your mother’s c***’ to Hong Kong protesters. 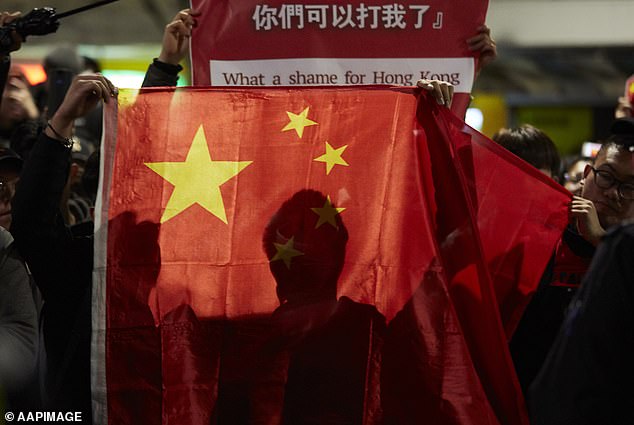 Pro-democracy demonstrators are expected to hold more rallies in support of Hong Kong on Sunday afternoon.

In a poster advertising the event, attendees have been told to ‘be friendly, be peaceful, be police, be safe, be united, sympathise’.

‘All Australians are welcome to our peaceful meeting,’ the red-and-white notice said.

Hong Kong has been plunged into its biggest political crisis since the former British colony’s return to Chinese rule in 1997, with a wave of protests against a now-suspended extradition bill which would see people sent to mainland China for trial in Communist Party-controlled courts.

The law has been suspended but not withdrawn, and many of its opponents deeply question the fairness and transparency of the Chinese court system.

Some expatriate dual citizens have said they fear they could be seized by China as they are travelling through Hong Kong.

The protests, which started in April, have now transformed into broader demands including the resignation of Hong Kong’s embattled leader Carrie Lam and calls for a ‘free Hong Kong’.

China’s ambassador to Australia, Cheng Jingye, issued a statement on Saturday accusing pro-democracy protesters of trying to ‘mess up’ Hong Kong and warning foreigners not to interfere.

‘Hong Kong affairs are solely the internal affairs of China,’ he said in the statement on the Chinese embassy website. 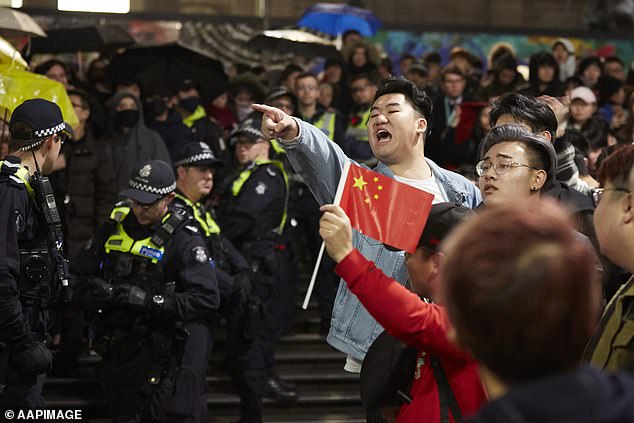