More than 1.6million people in England could already be infected with coronavirus

The true number of people infected with coronavirus in the UK could be as high as 1.6 million, with over half of those cases outside of London, analysis by health care data experts suggests.

And with a predicted daily growth rate of 20 per cent that figure may now stand at 2.8 million people, just three days after the modelling was carried out, reports The Sunday Telegraph.

Edge Health, a UK health care data analysis company, revealed that while the official figure of coronavirus cases stood at 10,000 on March 26, the company’s estimated true figure for infections in the UK was 1,614,505.

With widespread testing not yet available in Britain and swabs only being given to those in hospital and some NHS critical care staff, there could be thousands who have COVID-19 and are not aware of it, the study suggests.

Those with milder symptoms who are not admitted to hospital are also not accounted for in official figures.

Actor Idris Elba, 47, only got tested for the virus after coming into contact with Justin Trudeau’s wife Sophie at Wembley on March 4.

‘That’s when the person that came up positive, that was the time I got in contact with that person. So essentially, I could have been positive from March 4, but it’s hard to say when I contracted someone with corona, you can contract it at anytime but my known exposure was March 4.’

It comes as Britain’s coronavirus death toll rocketed by 260 to 1,019 yesterday as the UK suffered its worst day yet and saw a huge spike in victims, 13 of which had no underlying health conditions, .

The analysis predicted that London had 760,590 cases, the most in the UK, a fact grounded in official figures. While the Midlands was seen as the next most infected area with an estimated 282,954, with one in every 15 people infected with the virus in Wolverhampton.

One in ten people in London’s worst hit boroughs now carries the virus, according to the modelling, in areas such as Southwark, Kensington, Lambeth, Brent, Chelsea, Harrow, Wandsworth and Westminster.

Southwark was the most infected London borough according to official figures which confirmed 253 cases as of Thursday – researchers believe the true number is around 49,139. 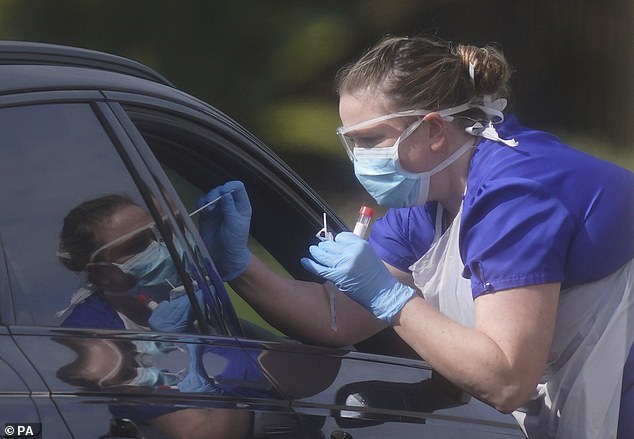 An NHS worker being tested for coronavirus at a temporary testing station in the car park of Chessington World of Adventures in Chessington, Greater London

While one in every 23 people in Birmingham are predicted to be infected with Covid-19 according to the modelling which placed 50,004 infections in the city, reports The Sunday Telegraph.

George Bachelor, co-founder and director of Edge Health, told the publication that he believes the virus will continue to spread rapidly over the next two weeks.

People who caught the virus before the country was placed on lock down by Boris Johnson on Wednesday will see a peak of critical care patients form around mid April, predicts Edge Health.

Speaking about the company’s infection predictions he said: ‘Critically, these projections are based on unproven assumptions, although, hopefully, they make clear the need for social distancing whether you are in Southwark or Hartlepool.’ 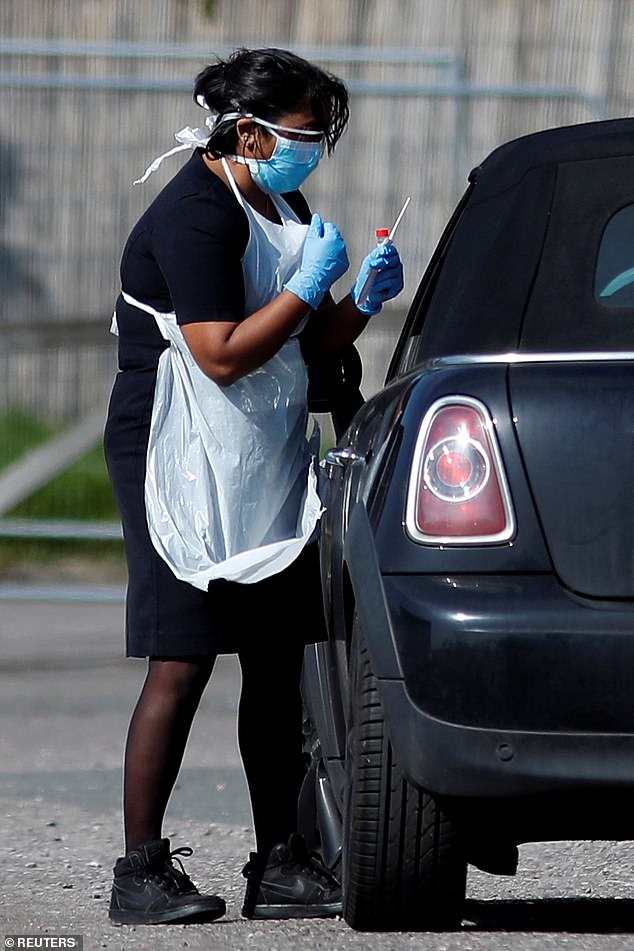 He added that more testing would unveil the actual number of people with the virus and ‘speed up the eventual return to normality’.

Figures were estimated by Edge Health by assuming the death rate of 0.7 per cent of people with the virus in London and 0.9 elsewhere in the country where elderly populations are higher.

The epicentre of the virus, currently London, could change to areas with a high population of older people and fewer NHS beds available, such as Essex where a daily growth rate of 48 per cent was recorded from Wednesday to Thursday – with 213 cases currently.