Hong Kong protesters have displayed their biggest show of force yet in a mammoth demonstration which saw nearly two million defy the Beijing-backed government and rally against growing Chinese encroachment.

A stream of umbrellas snaked through the city streets as the pro-democracy activists marched from Victoria Park, despite the police banning the demonstration from leaving the confines of the square.

Escalating tensions in the former British colony boiled over earlier this week as authorities clashed with protesters in the territory’s airport.

But – in the face of increasing anger over excessive police violence and Chinese threats – the rally concluded peacefully and without reports of any flare-ups.

Organisers said at least 1.7million people turned out for the demonstration, marking the 11th consecutive weekend of public protests.

Sensational aerial photographs show the park awash with colourful umbrellas – the rallying symbol of the mass movement which evolved from similar protests in 2014. 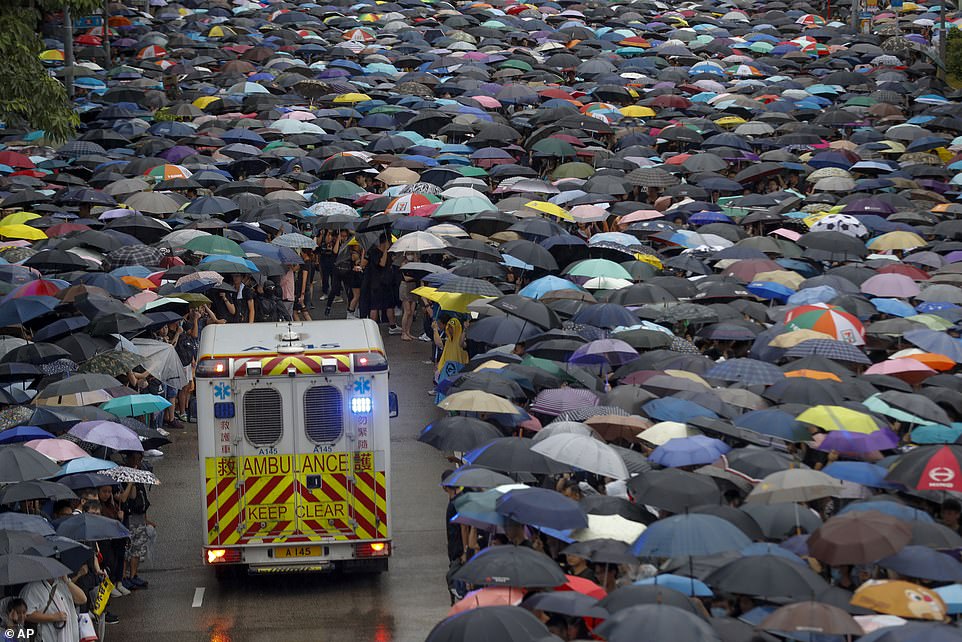 Protesters make space for an ambulance to travel during the rally in Hong Kong, while they walk with their umbrellas in hand 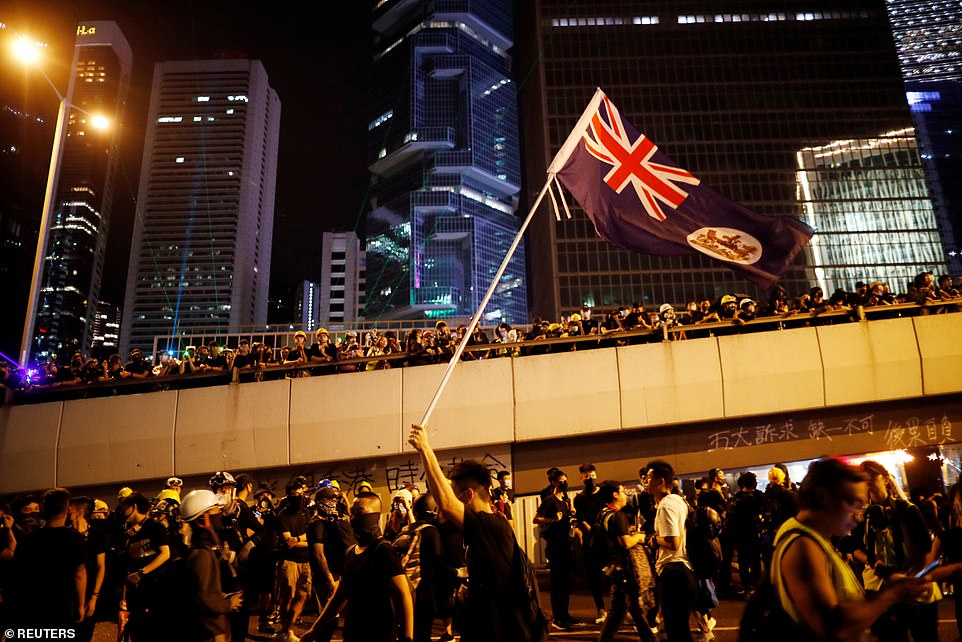 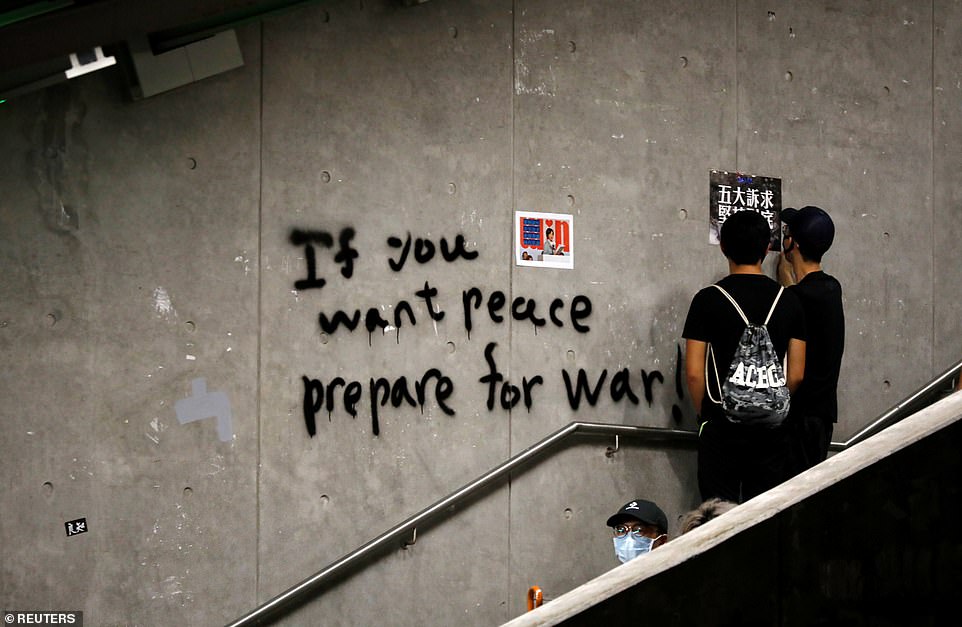 But Civil Human Rights Front organiser Jimmy Shan said the figure does not include those who were not able to make it to Victoria Park – where Sunday’s protest march began – due to traffic constraints.

The total turnout would make the rally larger than a massive march in June, when organisers estimated two million attended.

Police have not yet released their crowd estimates, which are generally much lower.

During the rally, protesters used laser pointers to highlight a man suspected of being an undercover police officer on Sunday.

Organisers said they hoped the assembly would be peaceful, which would make for a rare calm weekend in a movement that has been marked by violent clashes with police.

Law enforcement officers were keeping a low profile, with no riot police seen from the procession’s main routes.

‘We hope that there will not be any chaotic situations today,’ said organiser Bonnie Leung. ‘We hope we can show the world that Hong Kong people can be totally peaceful.’ 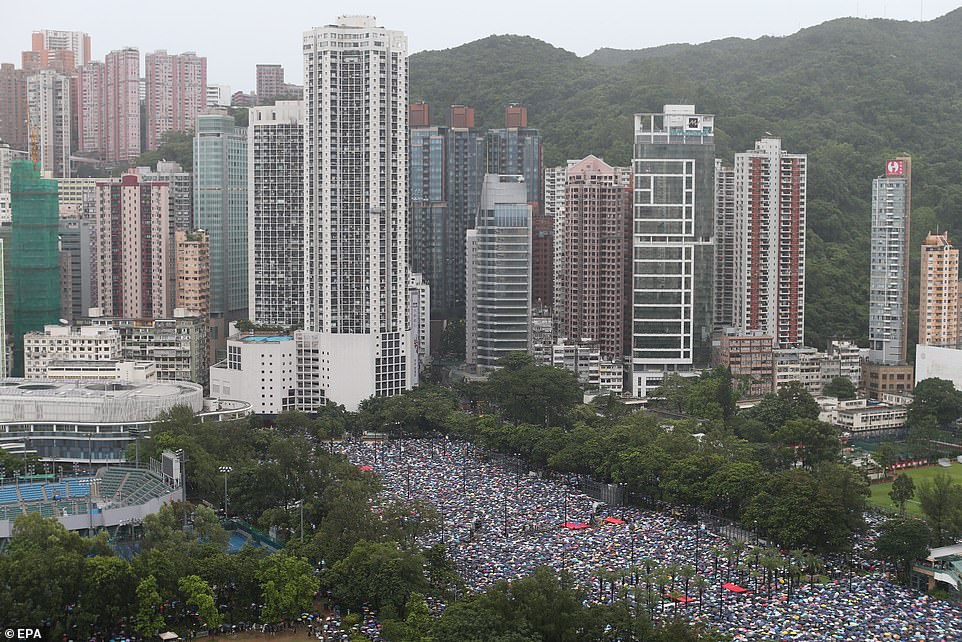 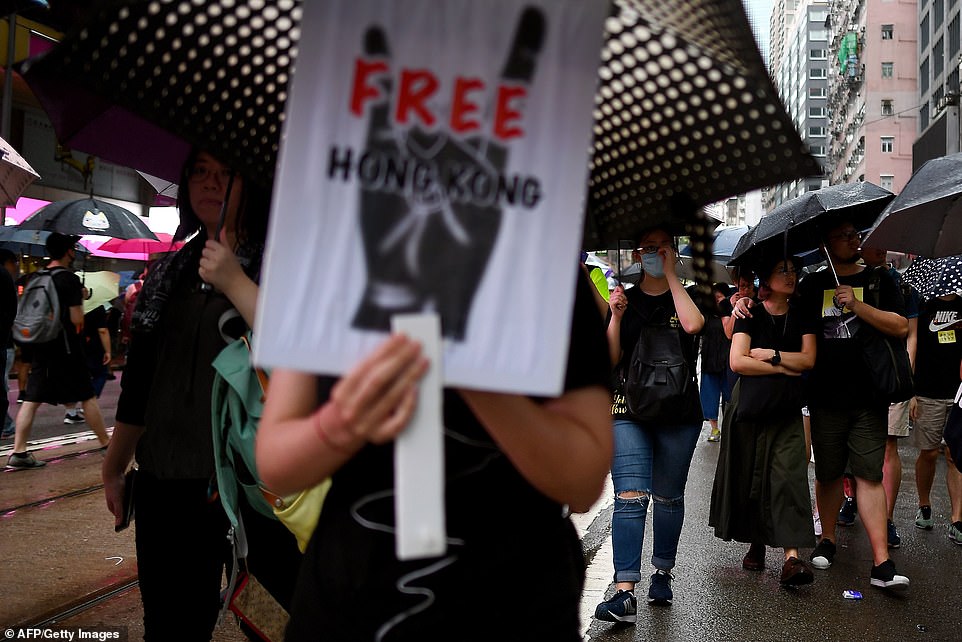 Protesters walk along a street during a rally in Hong Kong on August 18, in the latest opposition to a planned extradition law that has since morphed into a wider call for democratic rights 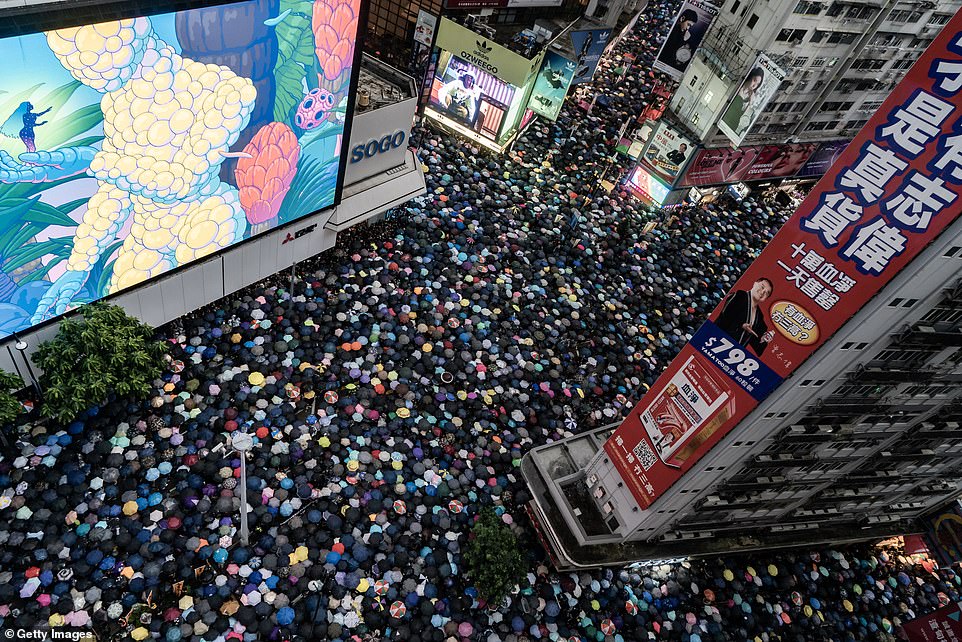 Organisers said at least 1.7million people turned out for the rally – which has entered its 11th consecutive weekend – turning the streets into rivers of umbrellas

The protests have been filled with clashes with police as demonstrators vent their frustrations over what they perceive to be the government’s refusal to respond to their demands.

While police granted approval for the rally, they did not approve an accompanying march.

Demonstrators nevertheless fanned out and filled the streets as there was not enough space at the designated assembly area.

Trains did not stop at stations near the assembly because of overcrowding.

In Beijing, You Wenze, a spokesman for China’s legislature, condemned statements from US legislators supporting Hong Kong’s pro-democracy movement. 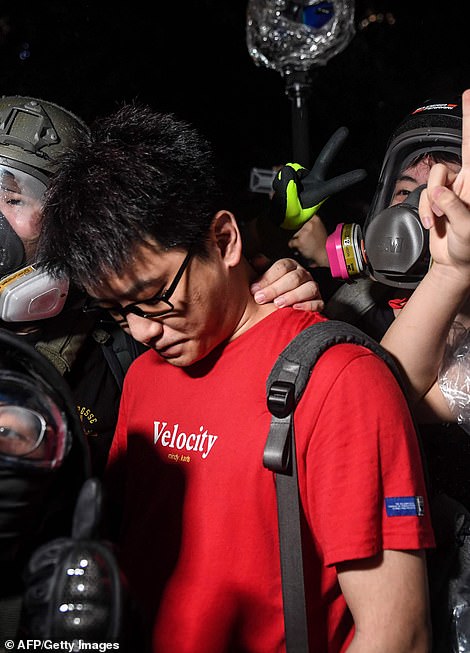 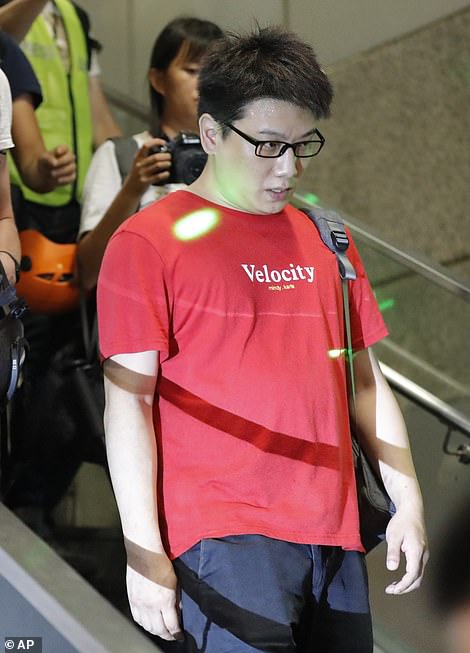 During the rally, protesters used laser pointers to highlight a man, sporting a red top and black glasses, suspected of being an undercover police officer 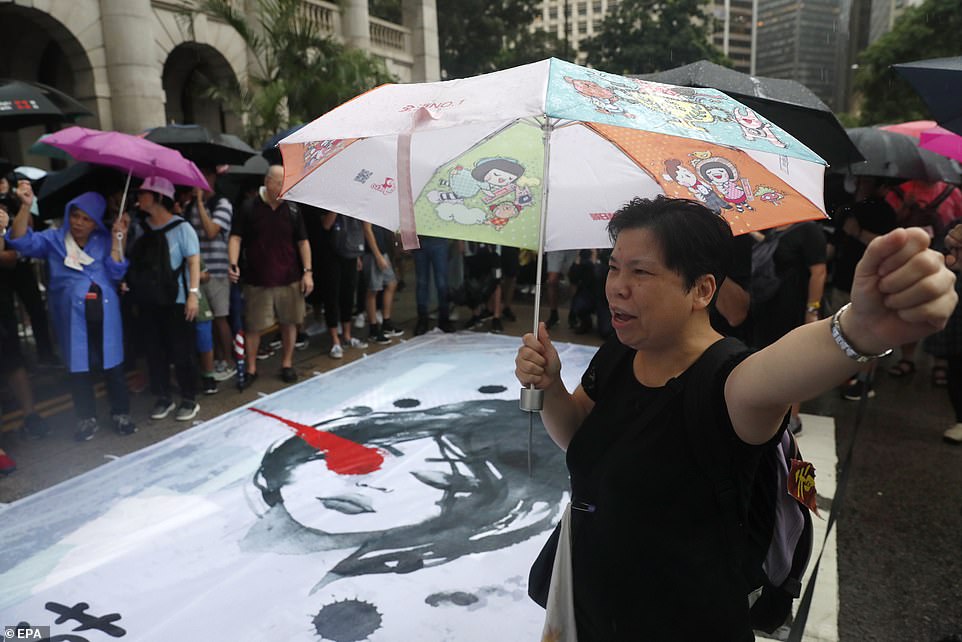 Mr You called the comments ‘a gross violation of the spirit of the rule of law, a blatant double standard and a gross interference in China’s internal affairs’.

He said Hong Kong’s 7.5million people and the Chinese population rejected the actions of a ‘very small group of violent protesters’ as well as ‘any interference of foreign forces’.

US Congress has the power to pass legislation affecting Hong Kong’s relationship with the US in ways that could further erode the territory’s reputation for stability and rule of law.

That includes the recent reintroduction of the Hong Kong Human Rights and Democracy Act in Congress, which would require the secretary of state to issue an annual certification of Hong Kong’s autonomy to justify special treatment afforded to the city.

More directly, President Donald Trump could issue an executive order suspending Hong Kong’s special trading status with the US, which could have a devastating effect on the local economy at a time when Beijing and Washington are engaged in a bitter trade war. 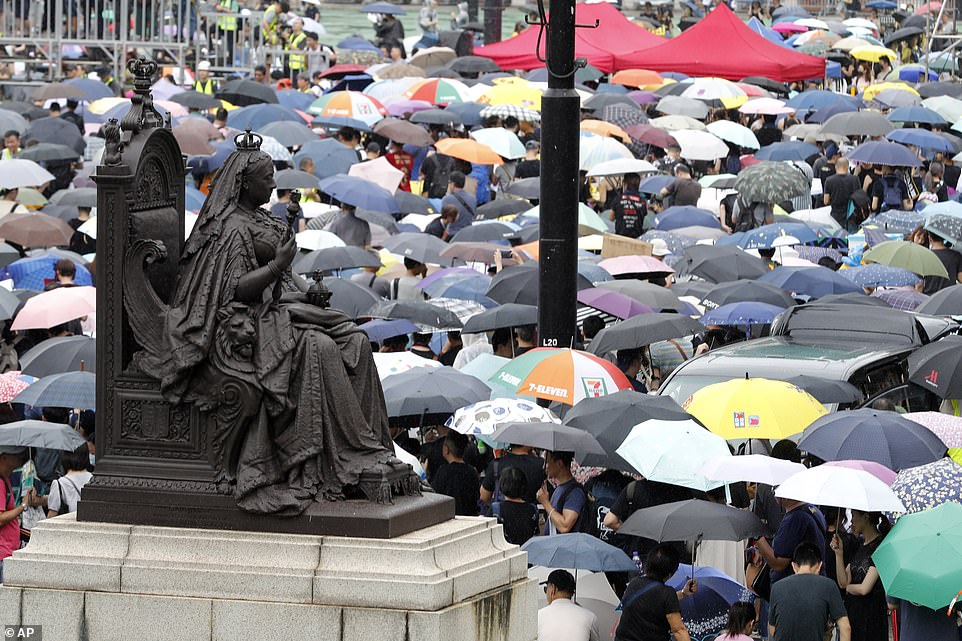 A former British colony, Hong Kong was returned to Beijing in 1997 under the framework of ‘one country, two systems’, which promised residents certain democratic rights not afforded to people in mainland China.

But some Hong Kongers have accused the Communist Party-ruled central government of eroding their freedoms in recent years.

The protest movement’s demands include the resignation of Hong Kong chief executive Carrie Lam, democratic elections and an independent investigation into police use of force.

Members of China’s paramilitary People’s Armed Police force have been training for days across the border in Shenzhen, including on Sunday morning, fuelling speculation that they could be sent in to suppress the protests.

Hong Kong police, however, have said they are capable of handling the protests.