So far, the Centers for Disease Control and Prevention (CDC) says there are confirmed cases in 10 US states since January 1.

The first measles vaccine was introduced in 1963 and, by 2000, it was considered to be eradicated in the US.

But the highly infectious disease has been spreading among people who are unvaccinated or live in states that allow non-medical exemptions for vaccines.

Doctors say these states, have become ‘hotspots’ of the anti-vaccine movement and that the only way to curb the crisis is to ban non-medical exemptions completely.

Since  2018, there have been measles outbreaks in Washington, Texas and New York totaling 265 cases

Of those states, four – Colorado, Oregon, Texas and Washington – allow exemptions for philosophical and/or personal beliefs.

Washington and New York, particularly, have been struggling to contain the disease that was considered eliminated 20 years in ago.

Last month, Washington declared a public health emergency after a measles outbreak that has affected 53 people in Clark County.

STATES THAT RECENTLY REVOKED THIS ALLOWANCE:

Forty-seven of the cases are in residents who have not been vaccinated. Thirty-eight cases are in children aged 10 and under.

State records show that 77.4 percent of all public students in Clark County received all their vaccines, making it among the worst in Washington state, according to The Oregonian.

Meanwhile, for the 2017-18 kindergarten school year, the median vaccination rates nationwide were 95.1 percent for DTaP, 94.3 percent for the MMR vaccine and 93.8 percent  the chicken pox vaccine, the CDC reported.

In Washington, nearly eight percent of children in the county were exempt from getting vaccines required for kindergarten for the 2017-18 school year.

A mere 1.2 percent were for medical reasons, while the rest were for ‘conscientious objector’ or ‘philosophical/personal beliefs’.

This makes the area a ‘hotspot’ of the anti-vaccine movement, Dr Peter Hotez, dean of the National School of Tropical Medicine at Baylor College of Medicine in Houston, Texas, told DailyMail.com in an interview last month.

He says the best way to stop this spread of cases is to get rid of non-medical vaccine exemptions.

‘Having all these unvaccinated children in Clark County is like pouring gasoline over a fire…and the gasoline is measles,’ said Dr Hotez.

‘It’s this horrible self-inflicted wound that never should have happened.’

The bill would have ‘every child at every public and private school in the state and licensed day care center’ receive the mumps, measles and rubella vaccine unless they have a legitimate medical or religious reason not to.

In New York, there have been at least 204 confirmed cases in Brooklyn, Monroe County and Rockland County since October 2018 – all in Orthodox Jewish communities.

Measles is a highly contagious infection caused by the measles virus.

When someone with measles coughs, sneezes or talks, infected droplets are sprayed into the air, where other people can inhale them and are then infected.

Symptoms present themselves between 10 to 14 days after infection and include fever, cough, runny nose and a total-body skin rash.

Once common, the disease is now rare due to the MMR (measles, mumps, rubella) vaccine.

The CDC recommends children receive the first dose at 12 to 15 months old and the second dose at four to six years old. 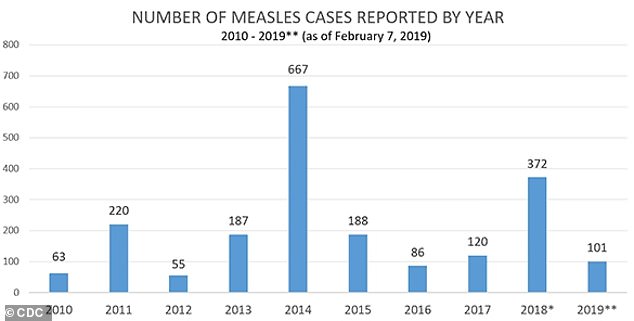 The vaccine is about 97 percent effective. But those who are unvaccinated have a 90 percent chance of catching measles if they breathe the virus in, the CDC says.

Before the measles vaccine was available, more than 500,000 cases were diagnosed in the US every year, with about 500 annual deaths.

In 2018, 372 cases of measles were confirmed in 26 states and the District of Columbia, the CDC reported.

It is the second-greatest number since measles was considered eliminated in the US in 2000.

A report published by the World Health Organization (WHO) last month said measles has seen a 30 percent increase in cases around the world.

Several recent news reports have come out about teenagers finally receiving the vaccinations they should have had as young children.

Ethan Lindenberger, 18, from Norwalk, Ohio, has now had shots to immunize him against six diseases including mumps and hepatitis, reported Undark.

His parents refused to give them to him because they are part of the anti-vaxxer movement which believes that vaccinations cause illnesses such as autism.

Meanwhile, 18-year-old Mayci, from Augusta, Georgia, told NBC News that she went to Reddit for advice on vaccines after her mother refused to immunize her as a kid.