Hundreds of aged care residents have been plunged into lockdown as Covid outbreaks hit facilities with few if any visitors allowed in.

More than 100 aged care centres suffered outbreaks over Christmas, with 385 cases detected across residents and workers as the highly contagious Omicron strain sweeps across Australia.

There are 65 facilities in NSW managing outbreaks, with many centres denying entry to visitors – despite high vaccination rates and fewer severe cases among residents.

It is the most active aged care outbreaks reported this year, prompting calls for state and federal governments to make changes to visitor policies to preserve the mental health of residents.

There are 105 aged care homes around the country battling Covid outbreaks as Omicron fuels a surge in infections nationwide. Pictured: Lillian Wells North Parramatta, which has more than 20 cases

Ian Yates, chief executive of Council on the Ageing, the national peak body for elderly Australians, said locked-down residents should be entitled to see one caregiver to combat the ill-effects of isolation.

‘It is a very difficult situation for providers right now. We are seeing so many complaints about people being locked in rooms. Which is leading people to question if their lives are worth living,’ he told the Sydney Morning Herald.

‘It is essential residents be permitted at least one visitor, but there is confusion about what is and isn’t allowed in the guidance from state and federal governments.’

As of Christmas eve, there were 105 active Covid outbreaks in nursing homes, more than double the 54 reported last week, Commonwealth data shows.

Of the NSW aged care outbreaks, 27 homes have two or more cases and four facilities are grappling with at least a dozen infections among staff and residents.

Two of the hardest-hit homes are in Sydney – St Basil’s Lakemba and Uniting Lillian Wells North Parramatta – which are collectively dealing with more than 40 infections among residents. 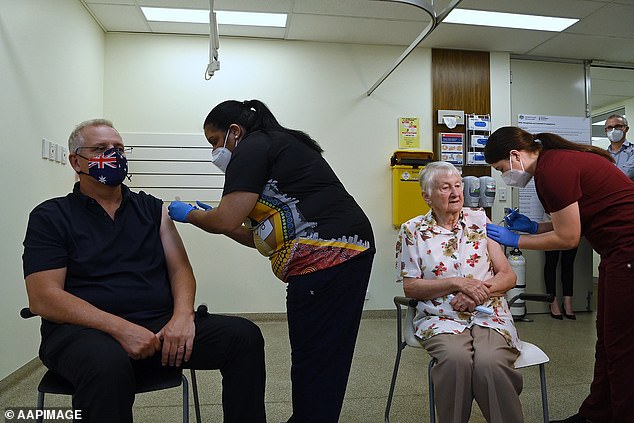 Aged care residents have been eligible for booster shots since November, but thousands of residents are yet to receive a third Covid vaccine shot. Pictured: Scott Morrison receives his booster shot on November 19 in Blacktown, Sydney

Since November, high risk groups, including the elderly, aged care residents, and Aboriginal and Torres Strait Islander adults, and health workers, have been able to receive a third Covid vaccine as phase one of Australia’s booster program.

However, there are still tens of thousands of aged care residents who are due to receive a booster shot as the virus runs rampant.

‘Every aged care facility that has been able and willing to receive because they were eligible and they were ready has had their deliveries done so far,’ he told reporters on Thursday.

‘Those that are still to be done are on the basis of their own timing. And so, we’re well ahead of schedule.’

As Omicron drives outbreaks across the country, the federal government has moved to hasten the nation’s booster rollout.

From January 4, boosters will be brought forward to four months after the second dose, down from five months, to help combat Omicron.

Then from January 31, people can get boosters after three months.

About 7.5 million Australians will be eligible for their booster shot come January 4. This will jump to 16 million at the end of the month once the time frame is dropped to three months.

The alarming rise in outbreaks comes as Covid case numbers continue to soar across the country over the festive season. 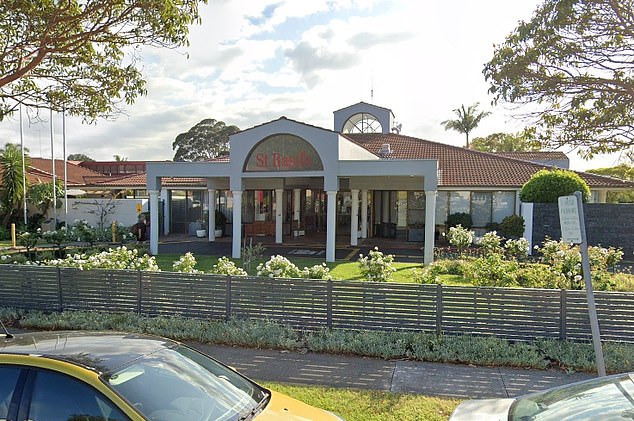 Despite the rise in infections, NSW Premier Dominic Perrottet said the state’s health system would cope and urged residents to go ahead with holiday plans.

However, state authorities are calling on NSW residents to use rapid antigen tests rather than PCR tests – unless advised by officials, travelling interstate, or symptomatic – to relieve pressure on clinics.

From midnight, house gatherings will be capped to 10 and density limits will apply to hospitality venues and gyms.

Interstate travellers will no longer need to PCR test before entering the state, but will need to do a rapid antigen test upon arrival.

Compulsory mask-wearing is in place in most states and territories as leaders try to limit the spread of the highly-infectious variant over the festive season.