It came as officials suggested they would soon look at easing strict recommendations aimed at preventing new outbreaks – and the number of confirmed coronavirus cases worldwide surpassed two million on Monday.

South Korea reported only 25 new cases overall on Monday, but the rise in ‘reactivated’ patients has raised concerns as the country seeks to stamp out infections.

Officials are still investigating the cause of the apparent relapses. But Jeong Eun-kyeong, director of the Korea Centers for Disease Control and Prevention (KCDC), has said the virus may have been reactivated rather than the patients being re-infected.

Medical workers transfer a patient to a hospital in Seoul, South Korea  on March 11 2020 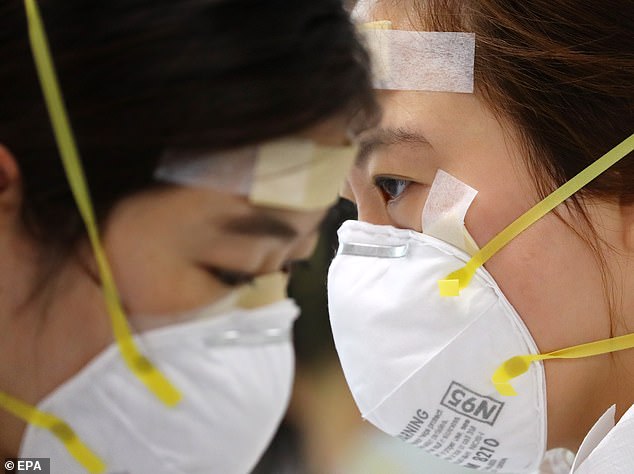 Other experts said faulty tests may be playing a role, or remnants of the virus may still be in patients’ systems but not be infectious or of danger to the host or others.

The 116 cases is more than double the 51 such cases South Korea reported a week earlier.

South Korea plans to send 600,000 coronavirus testing kits to the United States on Tuesday in the first such shipment following a request from U.S. President Donald Trump, a Seoul official told Reuters on Monday.

Government leaders, meanwhile, called on South Koreans to continue to follow guidelines and restrictions on social gatherings, but hinted that such measures could soon be eased. 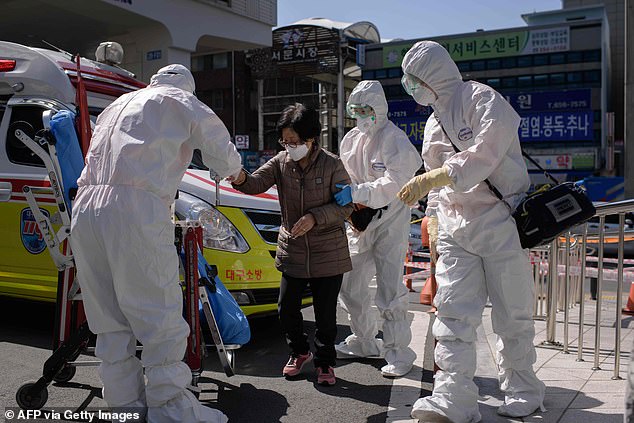 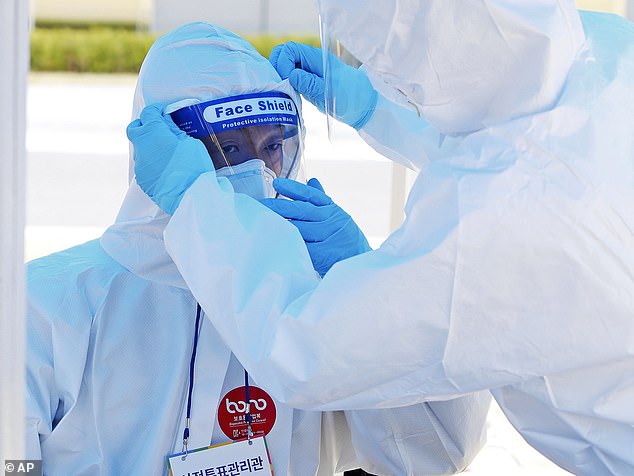 The country has over 10,000 confirmed cases of the virus and has recorded 217 deaths, according to the Johns Hopkins University data. Pictured: election officials secure masks in Yongin

South Korea has called on residents to follow strict social distancing until at least April 19, but as cases have dropped and the weather has improved, a growing number of people have been flouting the guidelines.

At a meeting on disaster management on Monday, Prime Minister Chung Sye-kyun said the government would soon be looking to loosen the guidelines, which call for people to stay at home, avoid social gatherings of any type, and only go out for essential reasons.

‘Later this week, we plan to review our intensive social distancing campaign that we have carried out so far and discuss whether we will switch to routine safety measures’ he said. 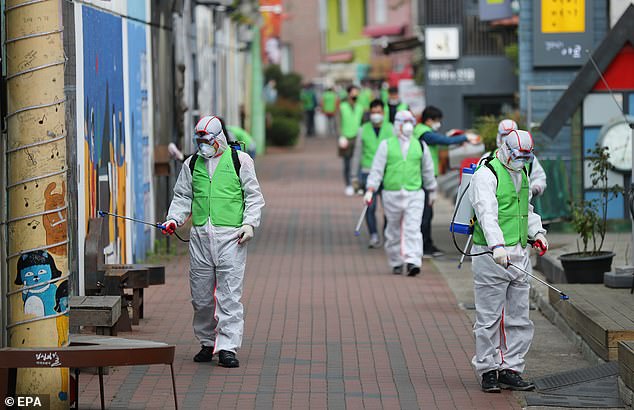 Health workers disinfect a street to curb the spread of coronavirus in Daegu, South Korea

Chung cautioned that even when the restrictions are eased, the country will not return to life as before the outbreak.

‘We need a very cautious approach because any premature easing of social distancing could bring irreversible consequences, and have to ponder deeply about when and how we switch to the new system,’ he said.

The country has over 10,000 confirmed cases of the virus and has recorded 217 deaths, according to the Johns Hopkins University data.

While recent recovery rates of the virus are promising, it does not mean that those who have been infected with coronavirus are not still at risk, as experts believe having the virus once does not mean you cannot get sick from it again.

According to Li QinGyuan, director of pneumonia prevention and treatment at China Japan Friendship Hospital in Beijing, those who have been infected with Covid-19 develop a protective antibody – but it isn’t clear how long the protection lasts.

‘However, in certain individuals, the antibody cannot last that long,’ Li told USA Today. ‘For many patients who have been cured, there is a likelihood of relapse.’

Dr Peter Jung, an assistant professor of pediatrics at the University of Texas Medical School at Houston told The Huffington Post: ‘Just as the flu can mutate, so could Covid-19, which would make an individual susceptible to reacquiring the infection.’

However, according to Dr Stephen Gluckman, an infectious diseases physician it seems likely that having the disease once results in immunity in most individuals – as is seen with other coronaviruses.

He said: ‘For the most part, the feeling is once you’ve had a specific coronavirus, you are immune. We don’t have enough data to say that with this coronavirus, but it is likely.’

This means that people who initially recovered are more likely to relapse rather than get reinfected with the virus.

According to one study, people with mild infections can test positive for the virus by throat swabs ‘for days and even weeks after their illness’.