More than 1,000 inmates at California’s San Quentin Prison have tested positive for coronavirus, meaning more than a third of the entire facility’s population now have the virus.

The number jumped from 823 on Sunday to 1,015 on Monday, a 22 percent increase. There have been 973 new cases in the prison in the last fourteen days.

The prison now has by far the highest number of cases out of all of California’s correctional facilities.

Last week, 30 of the cases were prison staff and five infected inmates were released.

More than 1,000 inmates at California’s San Quentin Prison have tested positive for coronavirus, meaning more than a third of the entire facility’s population now have the virus 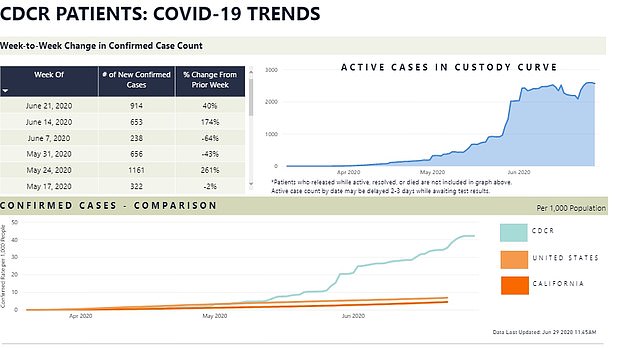 This is how cases in the California prison system have spiked since the start of May. The blue line represents the prison system compared to the rest of the state and the country

It’s unclear where they were released to and if they were forced to quarantine once they had left custody.

San Francisco Gate reports that the infections spiked a month ago when 121 inmates from the California Institute for Men at Chino were transferred.

Those infected inmates were not separated enough from others when they arrived, and spread the virus quickly.

It also comes amid a surge in testing across the prison system.

The spike in cases is not, however, being reflected in a spike in deaths.

The increase in the prison system mirrors the ongoing increase in cases across the state and the rest of the country that is leading to fears another shutdown may be required.

Gov. Gavin Newsom has ordered nightlife to close amid the escalating numbers.

Newsom announced on Monday at a press conference that some of the inmates and guards may be moved to a medical center to be cared for.

Prisons have been a source of concern since the pandemic began, with hundreds of inmates gathered in close quarters with no choice but to live on top of each other.

It prompted many leaders to start releasing what they considered to be non-violent criminals from custody.

There have not been any COVID-19 deaths at the prison whereas 16 inmates at the California Institute for Men died of the virus. 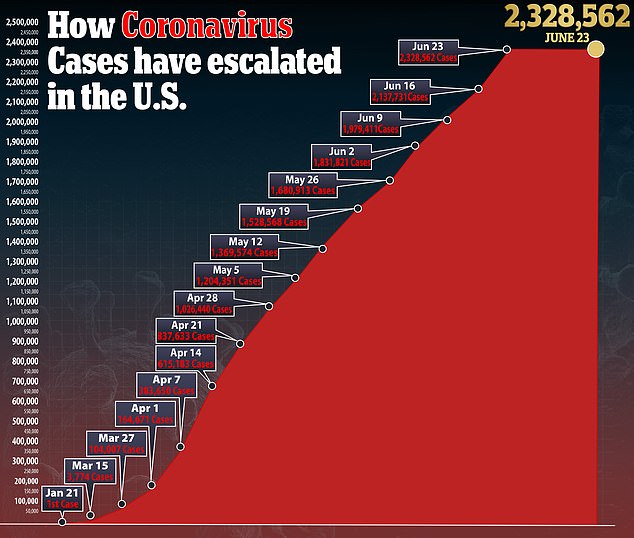