Hertz customers are attempting to sue the rental car company after being falsely arrested and sometimes jailed for months after the company listed the rental cars they paid for as stolen.

More than 165 people from several states have filed legal complaints against Hertz for ‘egregious business malpractices,’ according to civil litigation ongoing in U.S. Bankruptcy Court in Wilmington.

Each customer claims they were falsely arrested for driving a stolen vehicle despite having receipts confirming their rentals.

The furious claimants say that Hertz used an unreliable computer system and filed false police reports which lead to them being falsely arrested and sometimes jailed for months.

While imprisoned under false pretenses some of the claimants suffered heart attacks, panic attacks, seizures, and strokes as some lost custody of their children or lost their homes, Malofiy said.

Hertz filed for bankruptcy during the pandemic putting the claims on hold. Bankruptcy court judge Mary Walrath heard arguments on Thursday to decide whether the claims will be heard in court. 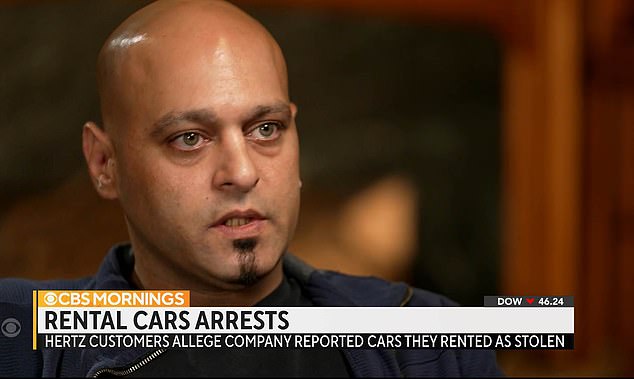 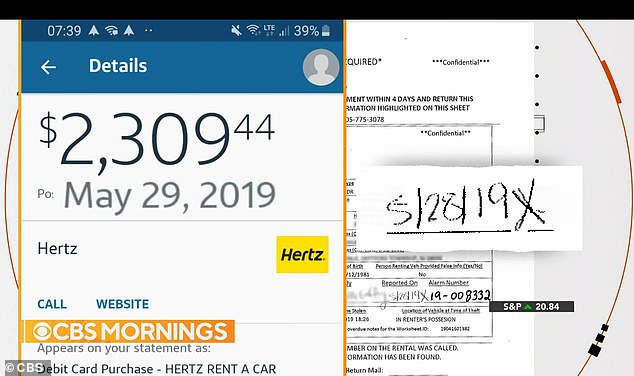 Hertz reported Ayoub’s rental car stolen on May 28, 2019 despite previously approving his rental and charging him $2,309.44 charge the next day 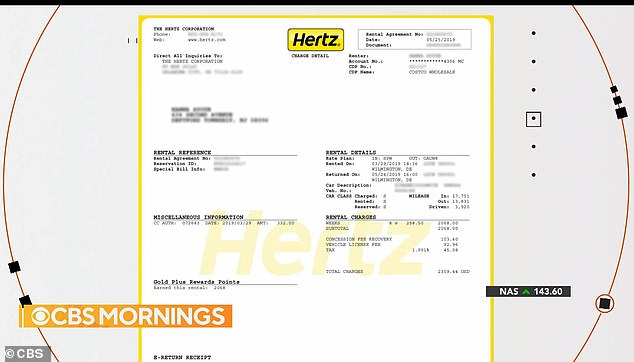 Attorneys argued there could be hundreds, if not thousands, more cases.

Philadelphia based contractor Hanna ‘John’ Ayoub was arrested outside his home on June 1, charged with a felony, and jailed for three months for driving a ‘stolen’ vehicle despite having receipts of his payments and rental agreement with Hertz.

‘How do you have a receipt in your pocket and still get arrested for stealing car?’ he questioned.

Ayoub needed an extra truck for a project in Delaware in April 2019 so he booked a long term with Hertz. Every week he called and paid $300 to extend his rental.

‘By the third week, just after the extension, when they (Hertz) said everything was good and charged me for it, I received a call the following day saying that I am not authorized to use the vehicle anymore, even though I had been charged,’ Ayoub told Delaware Online.

Four days later he was arrested outside his home in New Jersey and charged in Delaware and New Jersey criminal courts with crimes related to stealing the vehicle.

‘They said that they had no record of the extension on the vehicle despite speaking to them a day before and receiving confirmation,’ Ayoub said. ‘Everything just turned into a nightmare from that point onward.’

Despite having receipts of his charges from Hertz he was jailed for three months. The felony charges were finally dropped by both courts after receiving bank statements and call recordings of Ayoub’s conversations with Hertz associates confirming his rental.

‘I have not been able to work,’ said Ayoub told the Philadelphia Inquirer. ‘I take on odd jobs. I live with my parents. I don’t even have a vehicle right now.’

Hertz told the Philadelphia Inquirer last year that they either did not have a record of his rental extensions or some were not approved. 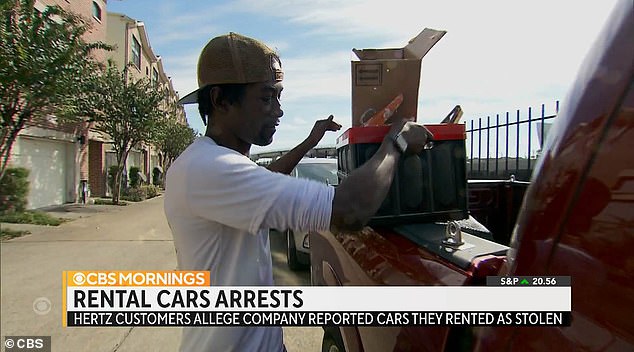 James Tolen was arrested for allegedly driving a stolen vehicle on December 23, 2019 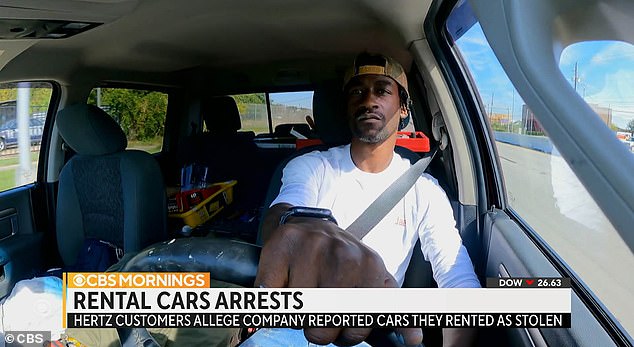 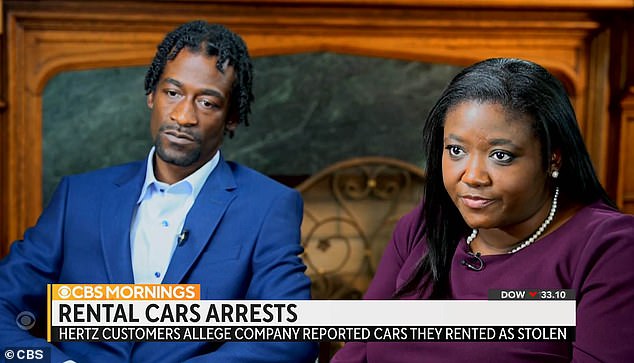 Remembering being pulled over Tolen said: ‘I was actually really thinking that I wasn’t going to make it home’

Another contactor across the country has also filed a claim against Hertz after being falsely arrested for driving a stolen vehicle which he rented from the company.

Houston contractor James Tolen wasn’t sure why he was pulled over on December 23 as he drove home after finishing a job around 10 pm.

He heard officers on a loud speaker ordering him to exit his vehicle, lift his shirt, and back up toward them. ‘When I turned around I see both the officers trained their guns on me’ Tolen told CBS News.

‘It was just terrifying. It was bad. I was actually really thinking that I wasn’t going to make it home.’

After being handcuffed, Tolen said officers told him the pickup truck he was driving had been reported stolen which is when he showed officers his rental agreement which listed him as the authorized driver.

‘I was like, ‘That’s impossible. I rent from Hertz. I’m a contractor,” he told police.

According to reports, the vehicle had been reported stolen three months earlier- prior to Tolen renting from Hertz.

After seeing his rental agreement, an officer called Hertz. Tolen said he overheard the officer questioning Hertz: ‘Do you know what you put this guy through?…This guy could have lost his life.’

The officer condemned Hertz telling them they needed a better system and that Tolen had an authorized rental agreement and would be allowed to drive the truck home.

Tolen’s partner, Krystal Carter, said that they had rented vehicles for Tolen’s renovation company about 12 times that year. ‘I was hot. Hot,’ Carter said. ‘Like, we rented several times from them that year. Several.’

Hertz has not commented on Tolen’s claims.

Attorney Malofiy told CBS Hertz is ‘trying to hide’ what he calls ‘a corporate disaster.’

‘They’ve been aware of this for years, and instead of doing the right thing and addressing it, they’re trying to sweep this under the rug, even through bankruptcy.’

Malofiy first worked on a similar case in 2015 when a friend of a friend spent 12 days in jail. At first he thought it was a one off but during the trial he discovered this is a systemic issue affecting people across the country. He has been helping people fight Hertz ever since.

The Philadelphia attorney claimed that when Hertz loses track of their vehicles instead of working to locate the vehicle themselves they file a theft report with the police.

‘Hertz is bacially using the police as a tax paid repo service and shifting private matters to the community,’ Malofiy claimed, ‘instead of taking necessary steps they just file a police report shifting responsibility to police.’

The attorney explained that Hertz has especially aggressive standard operating procedures compared to their competitors because they were the first care rental company to rent to ‘less credit worthy individuals’ and allow renters to use debit cards.

But he believes these aggressive policies ‘goes to destroying human lives.’

Hertz has claimed the attorneys representing the claimants ‘have a track record of making baseless claims that blatantly misrepresent the facts. 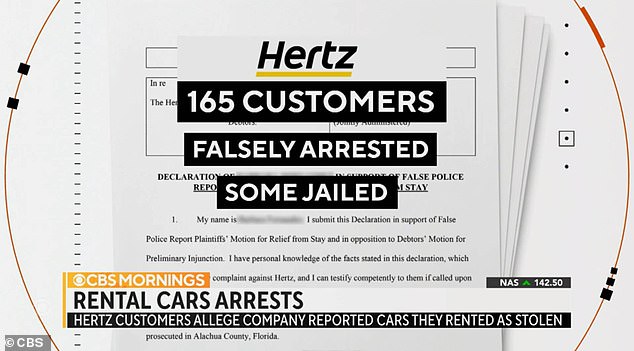 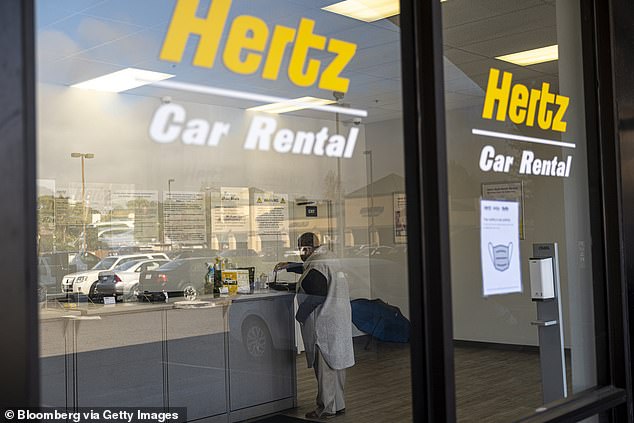 During Thursday’s hearing to decide whether the claims will be allowed to continue. Attorneys for Hertz argued certain claims should be dismissed based on when they were filed, but the judge allowed those claims to move forward as long as the plaintiffs file individual amended and more specific details about each claim.

The hearing also worked to determine what relevant records the company maintains. Malofiy said Hertz records false arrests in an a secret internal database. He pointed to a similar case filed against Hertz in South Carolina in which the company shared the database with attorney Fritz Jekel under a confidentiality agreement, according to court correspondence.

Jekel said, ‘They produced in less than a week, a dataset, compiled by three third-party administrators that precoded to be information on false arrests and theft or conversion claims made by renters against Hertz from 2008 through 2016,’ but due to a protective order he is barred from sharing the data.

The South Carolina attorney is currently in the process of filing a motion to modify the protective order to bring this information to light, Malofiy told DailyMail.com.

If a person files a false police report, they can be charged with a misdemeanor and go to jail. But Malofiy claimed Hertz is using a loophole filing these theft reports as a corporation.

Then once the vehicles have been returned or proof of the rental payment has been confirmed the theft report should be dropped but Malofiy said in many times it is not, which is why so many of his clients remain unjustly jailed for months.

‘Hertz points to the police and the police point to Hertz,’ while his clients remained behind bars Malofiy explained.

A spokesperson told the Philadelphia Inquirer the company had no procedure to withdraw a police report as it aims to maintain a relationship of ‘integrity and responsibility’ with law enforcement.

However, certain law enforcement agencies, such as the regional airport in Louisville, Kentucky in 2015 and Indianapolis Airport police in 2016, have put a limit on the number of stolen vehicles Hertz can report.

Judge Walrath agreed to continue discussions to consider potential access to the database, which Malofiy claimed proves that Hertz was well aware of the problem and deliberately failed to fix it.

‘We are encouraged by today’s important ruling, which enables us to proceed with our efforts to hold Hertz accountable for the damage it has inflicted upon the lives of so many victims,’ Malofiy said after Thursday’s hearing.

Another filing will be sent to the court next month before the next hearing in January.

Former high level inventory control employees from Hertz have reached out to Malofiy’s team as they plan to file declarations and join the claimants next filing to speak out against Hertz’s policies, the attorney told DailyMail.com.