More than 40 members of Ghost Face Gangsters indicted in Georgia

The US Department of Justice has announced that ‘Operation Vanilla Gorilla’ targeting the Ghost Face Gangsters has netted 43 suspected members of the notorious white supremacist prison gang.

A 93-page, 83-count federal grand jury indictment unsealed on November 16 in US District Court in Savannah, Georgia, lists the charges against 43 men and women for dozens of offenses related to trafficking methamphetamine, cocaine and heroin, as well as weapons charges.

According to the indictment, the drug-trafficking ring began operating in 2015 and continued its illegal activity until the present, selling methamphetamine in Bryan, Chatham, Effingham, Emmanuel, Evans, and Tattnall counties in Georgia. 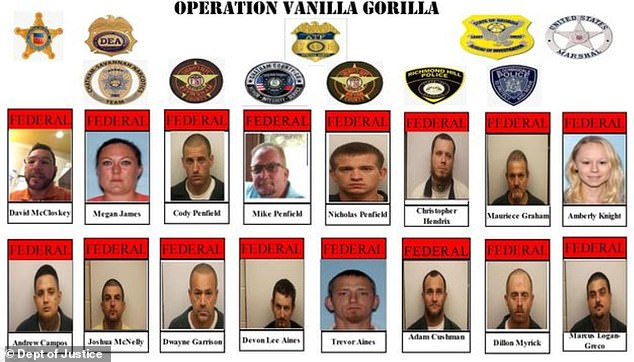 The men and women, ranging in age from 22 to 55, have been charged with dozens of counts related to trafficking methamphetamine, cocaine and heroin, as well as gun possession 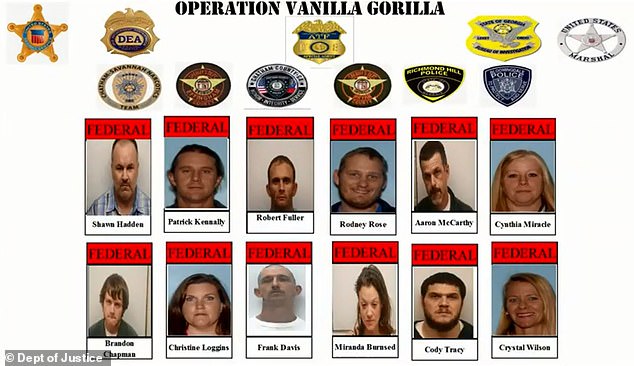 The press release from the Justice Department said many of the the suspects at the center of the case are members of the Ghost Face Gangsters, described as a violent white supremacist street gang operated largely from inside prisons, which has been tied to killing police and correctional officers.

Of the 43 defendants charged, 41 are currently in custody. Their ages range between 22 and 55, and some have colorful nicknames like ‘Hot Boy’; ‘Country Crack’; ‘Chubs’ and ‘Picnic.’

If convicted, each defendant faces up to a life in prison.

‘Operation Vanilla Gorilla’ is one of the largest crackdowns targeting the criminal enterprise and follows the March 2018 arrests of 23 gang members in the Northern District of Georgia on federal charges.

Additional members were arrested in October 2018 on state charges in Spalding County, Georgia.

‘When I was sworn in as the United States Attorney, I pledged that we would make neighborhoods safer and work hard to dismantle criminal street gangs,’ said US Attorney Bobby Christine in the news release. ‘As this indictment demonstrates, we will coordinate with federal, state and local law enforcement to identify criminal organizations; we will target them; and we will dismantle them.’ 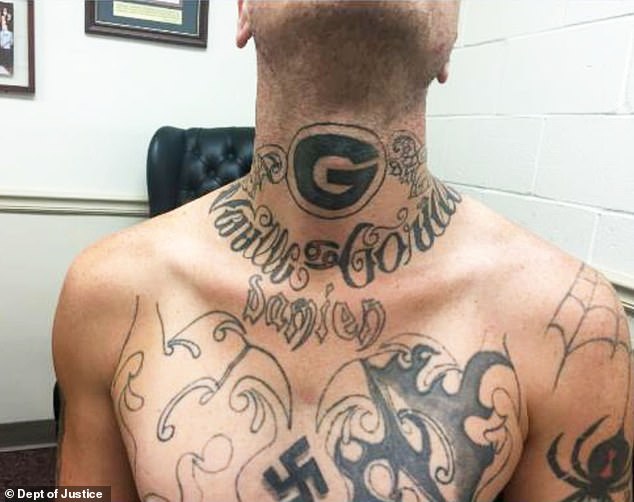 The name of the operation comes from a title that many gangsters hold, among them one who tattooed the phrase on his chest (pictured)

The name for the operation, which was carried out by local, state and federal officials, was inspired by the gang itself.

The gang got its start in the early 2000s in the Cobb County Jail but has since spread to other prisons in Georgia. The Anti-Defamation League describes the group as white supremacist.

Christine said there are currently over 2000 members of the Ghost Face Gangsters in Georgia’s prison system.

Beside trafficking in illegal narcotics, the Ghost Face Gangsters has gained notoriety for violently punishing those who hadn’t upheld the rules of the gang or who had offered testimony against members.

In one instance a gang leader, Jeffrey Alan Bourassa, gave instructions from prison to punish a gang member only identified as JBB. On December 2016 they held JBB at gunpoint and, using a knife, cut off his gang tattoo.

While some of the reported leaders — such as Bourassa, David Gene Powell, Marc Avon Lefevre and Richard Brian Sosebee — were in prison, others within the gang were given leeway to enforce gang rules or smuggle drugs and cellphones into prisons around the state, according to the October indictment.

In February 2014, James Phillips shot a Cobb County police officer five times and told another person prior to the shooting ‘this is what it means to be Ghost Face.’ Phillips is deceased.

The same gang has also been linked to high-profile cases, including the June 2017 shooting deaths of correctional officers Sgt. Christopher Monica and Sgt. Curtis Billue by inmates in Putnam County.

Prosecutors are seeking the death penalty against Ricky Dubose and Donnie Rowe for the killings.