More than 5,000 Britons jetted to the Maldives in lockdown despite travel ban

The Maldives were visited by over 5,000 Britons who jetted away in lockdown to the popular holiday resort location.

Despite international travel being banned, the Ministry of Tourism in the sun-drenched South Asian state said 2,074 landed there in January and 3,126 in February.

They represented a 86 per cent fall in UK arrivals to the Maldives compared to pre-pandemic times, but were still puzzling as international tourism from the UK is illegal.

The details emerged as foreign sightseers also appeared to be starting to jet over to come back to English tourist attractions, including London.

Border Force figures show that of the 20,000 people arriving in Britain each day, 8,000 are tourists.

Some flights are still operating to the Maldives but those returning have to quarantine for ten days.

An industry source said ‘We have not been sending holidaymakers abroad since the Tier 4 restrictions came into force before Christmas.

The Maldives is a popular tourist destination at the start of the year, with 2021 no exception 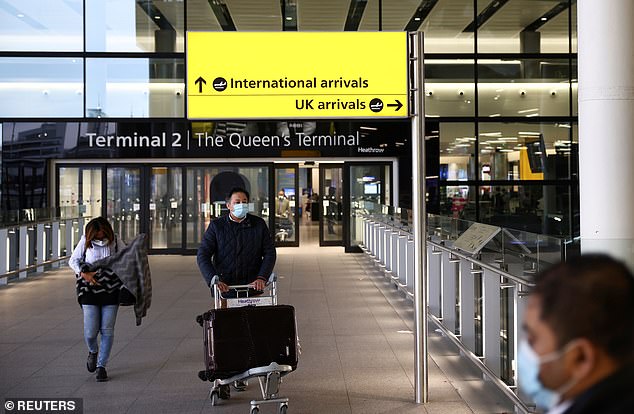 International holidays from the UK have been banned with fines of £5,000 threatened

‘While we’ve been abiding by the rules, what these figures show is that some people feel they are above the law.

‘They are pretty galling when we’ve been treading water trying to keep our businesses afloat,’ they added to the Telegraph.

Travelling from the UK abroad for a holiday can be punished with fines of £5,000. Those travelling for legally permissible reasons must fill out a declaration form.

Yesterday it emerged thousands of tourists are still being let into the UK every day even though Britons have been banned from overseas trips – with recent arrivals including a holidaymaker from Peru who wrote on a visa form that he ‘wanted to visit Big Ben’.

Of the around 20,000 people arriving in the country every day, some 40 percent – or 8,000 – are tourists, figures compiled by Border Force staff revealed.

This rises to 80 or 90% at Gatwick and Eurostar terminals, while at Heathrow the proportion is around 20 to 30%, according to data gathered by whistle-blowers. 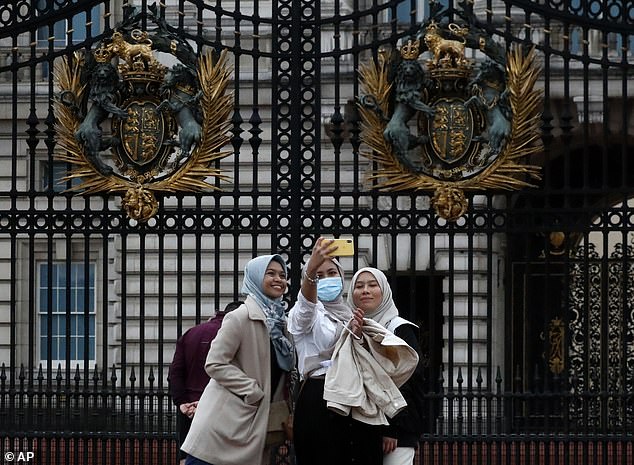 Tourists in front of Buckingham Palace, it is not known if they are international visitors

The PM will unveil a traffic light system that will see destinations rated as red, amber and green

Q&A: How will the regular testing programme work?

What is being proposed?

Ministers want everyone in England to take a Covid test twice a week to help quickly identify any surge in cases as the economy and society are unlocked in the coming months.

People will be able to order so-called lateral flow tests for use at home, or get tested at work or at sites run by local councils. They are already used by millions of children following the return to school last month.

What are lateral flow tests?

These pregnancy-style tests can deliver results at home within half an hour. Like a regular test they involve taking a swab from the back of the throat and nose but the samples do not have to be sent for laboratory analysis.

Are these tests reliable?

They are not as sensitive as a standard PCR laboratory test. One study found they missed 40 per cent of asymptomatic cases. However, they perform much better at picking up cases where people have a high viral load. The Government says they have picked up 120,000 cases which would not otherwise have been identified.

What if I test positive?

People who test positive will be asked to self-isolate in the normal way, as well as providing details of their contacts to the Test and Trace service.

What about false positives?

Recent analysis by NHS Test and Trace suggests fewer than one in a thousand lateral flow tests will produce a false positive. However, anyone who does test positive will be offered a PCR test to confirm the result.

How much will this cost?

Officials were tight-lipped about the likely cost, but acknowledge it will run into billions of pounds. Lateral flow tests are much cheaper than the standard PCR ones, with some reports suggesting the Government can buy them for as little as £5 each. But if 25 million people were to test twice a week, the cost would still top £1 billion a month.

What will it cost me?

Nothing. The Government will pick up the bill for all tests.

In London Camilla and Andres told the Radio 4 Today programme they were staying with family.

Andres said: ‘We’re from Argentina. We visited here five years ago and it was crazy, you couldn’t even walk here so now we are taking this opportunity to see typical tourist places

‘We came here in January and we had to quarantine. The atmosphere is a little strange

‘Typically its so crowded and without tourists it’s different, sad. I’d prefer to see more people around.’

Another tourist seen outside Buckingham Palace said: ‘I am from Ghana and it’s like a dream come true to be here and see where Queen Elizabeth lives’

Dimitri from Boston, starting a new job, added: : ‘I feel like I’m seeing more of the city itself and the architecture, some things like that.

‘Thinking more about the history and when I engage with people a little bit more of a smaller town feeling. I can’t wait for April 12. Going to a pub straight away and watching some footy I guess.’

Travel industry leaders have expressed frustration at the lack of ‘clarity’ in Boris Johnson’s update on the resumption of foreign leisure travel.

The Prime Minister told a Downing Street briefing on Monday night he was ‘hopeful’ that trips can resume on May 17, but claimed it was too early to provide more certainty.

Airline bosses plead to be allowed to fly

UK airlines bosses have demanded the Prime Minister give them the green light for international travel within weeks.

The chief executives of British Airways, easyJet, Jet2.com, Loganair, Ryanair, Tui and Virgin Atlantic as well as trade body Airlines UK wrote to Boris Johnson as ministers made it clear the ban on foreign travel will be in place until at least May 17.

In the letter, shared with the Sun, they recognised restriction-free universal travel may not be possible by May 17.

‘However there can be no economic recovery without aviation, and we are confident we now have the tools to enable a safe and meaningful restart to travel in May – allowing us to return to our job of reuniting friends and family, supporting trade and business and allowing Britons to enjoy a well-earned break again,’ the letter stated.

It added: ‘We believe vaccinated passengers should not be subject to travel restrictions and that testing can also reduce the barriers to travel including for areas that are considered to present some risk. Only very high-risk areas would be subject to more stringent measures’

The letter comes after the same group of airline bosses on February 18 called on the Government to outline a recovery road map for the industry so they could plan for the summer.

At the same time they called for further economic support for UK aviation to stimulate and strengthen any recovery when it comes.

Heathrow Airport chief executive John Holland-Kaye said: ‘Now that a safe, scientifically-backed process has been agreed upon, a clearer timeline for the return to international travel is needed.’

He added that the announcement of a ‘risk-based approach’ with information on how testing and vaccine rollouts will facilitate travel was welcome.

He went on: ‘Government cannot keep kicking the can down the road as hundreds of thousands of jobs are at risk.

‘It needs to urgently put in place safe solutions to travel for business, leisure and to see family.’

Clive Wratten, boss of trade body the Business Travel Association, said: ‘Today’s announcement from the Prime Minister is beyond disappointing.

‘We are leading the way in vaccination and science. This is a cause of huge celebration, but if we are to restart our economy, we need to have a clear pathway to international travel and trade.

‘This has once again been kicked down the road.’

He added: ‘The business travel industry continues to be crippled by today’s lack of movement.’

Airport Operators Association chief executive Karen Dee commented: ‘It is disappointed that the initial update from the Prime Minister continues to suggest significant barriers to international travel and may push back the date of restart beyond 17 May.’

Tim Alderslade, boss of Airlines UK, an industry body representing UK-registered carriers, said: ‘Whilst we support the establishment of a framework for restarting international travel and welcome the removal of self-isolation for arrivals from green countries, today’s announcement does not provide the clarity we were seeking on the road map back towards normality.

‘We await further details but the measures indicated, including the potential for multiple tests for travellers even from ‘green countries’, will prevent meaningful travel even to low-risk destinations.’

Rory Boland, editor of consumer magazine Which? Travel, said: ‘The Government’s plans to use a traffic light system to safely restart international travel will be welcome news to both industry and holidaymakers, but crucial details are still outstanding.

‘With mandatory testing set to continue for all destinations, the cost of private tests mean millions risk being priced out of travel – so the Government must urgently look at ways to reduce these costs before it reopens international travel.’

Manuel Cortes, general secretary of trade union the Transport Salaried Staffs Association, said: ‘We were expecting an update on international travel today, but the Prime Minister has kicked that down the road, dashing hopes across our travel trade.

‘After almost a whole year of shut down, our travel trade is in a desperate state, with jobs and businesses lost or suffering.’

Joss Croft, chief executive of UKinbound – a trade body representing the inbound tourism sector, commented: ‘When the taskforce’s full report is published on April 12 we need to see a robust four-nation approach to reopening and the intention to develop bilateral and multilateral travel agreements with valuable international markets such as the US.

‘A stop-start restart is one of the biggest threats to our sector and it’s therefore crucial that Government implements the recommendations of the taskforce and continues its dialogue with industry, which will aid consumer confidence to travel to and holiday in the UK.’