More than 800 New Yorkers wearing face masks and practicing social distancing waited in the rain on Friday for a food pantry distribution.

The event in Brooklyn hosted at St. Michael-St. Malachy Church by Catholic Charities of Brooklyn and Queens was held a day after the US Labor Department reported that there are now at least 26 million Americans who have filed for unemployment since the coronavirus outbreak began.

‘It was a lot of unemployed people. It’s always a good feeling to help someone else in need,’ Barbara Garcia, the church’s business manager told DailyMail.com. 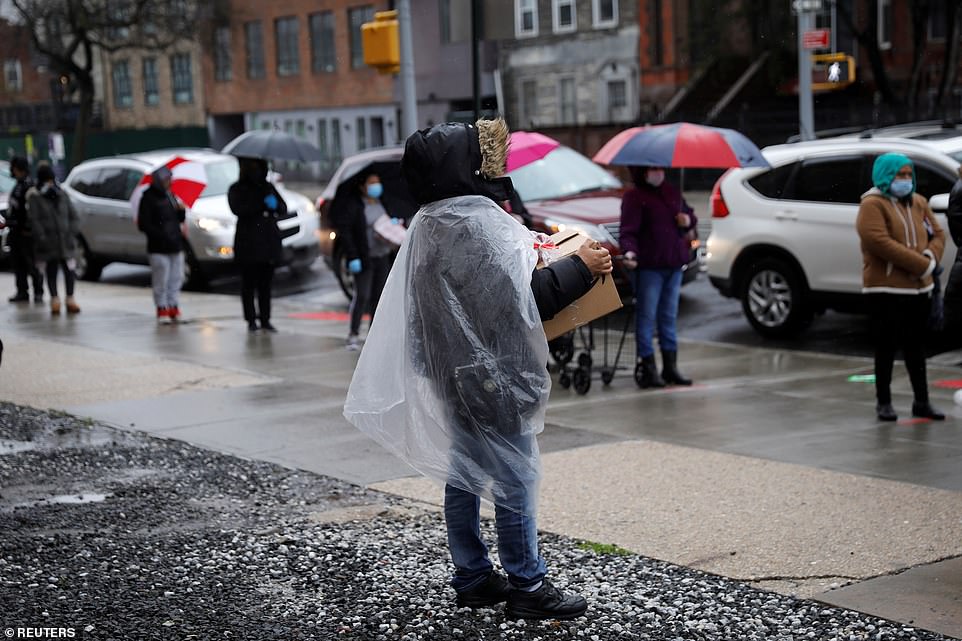 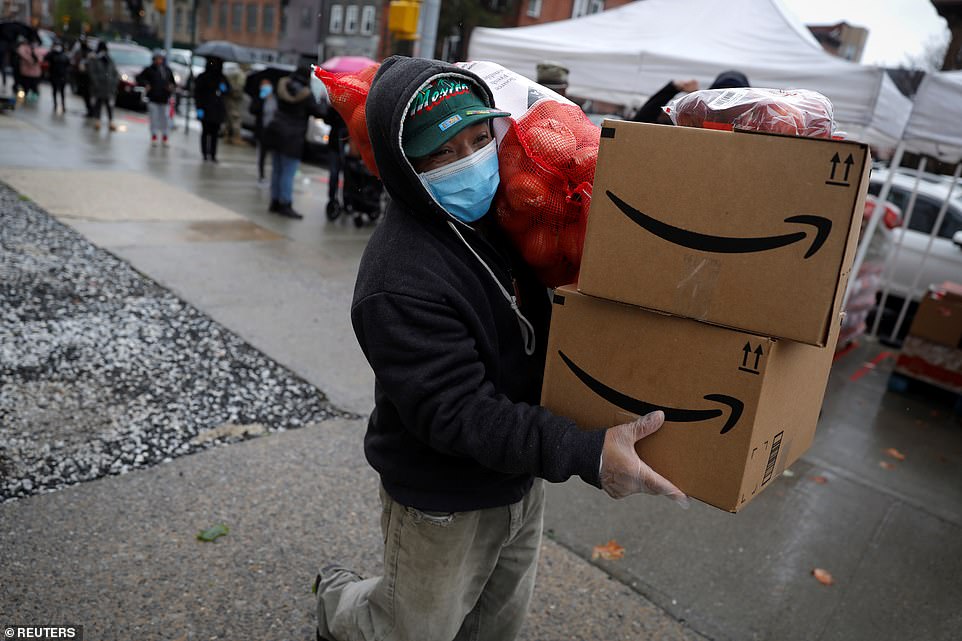 Catholic Charities of Brooklyn and Queens has noticed an increase in demand across its 20 parish-based food pantries. A man walks away with boxes of donations and sacks of food 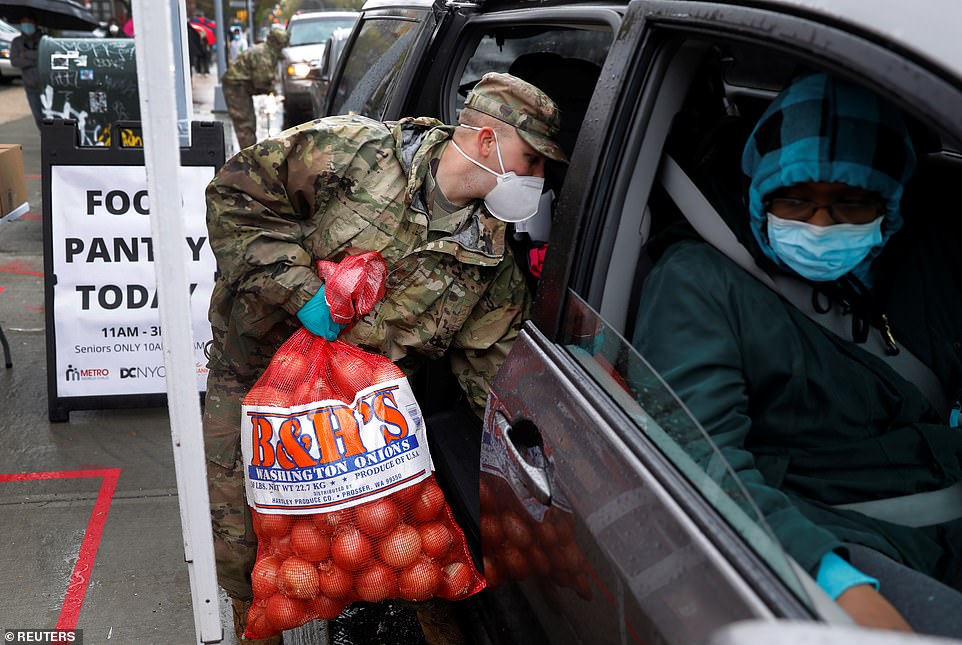 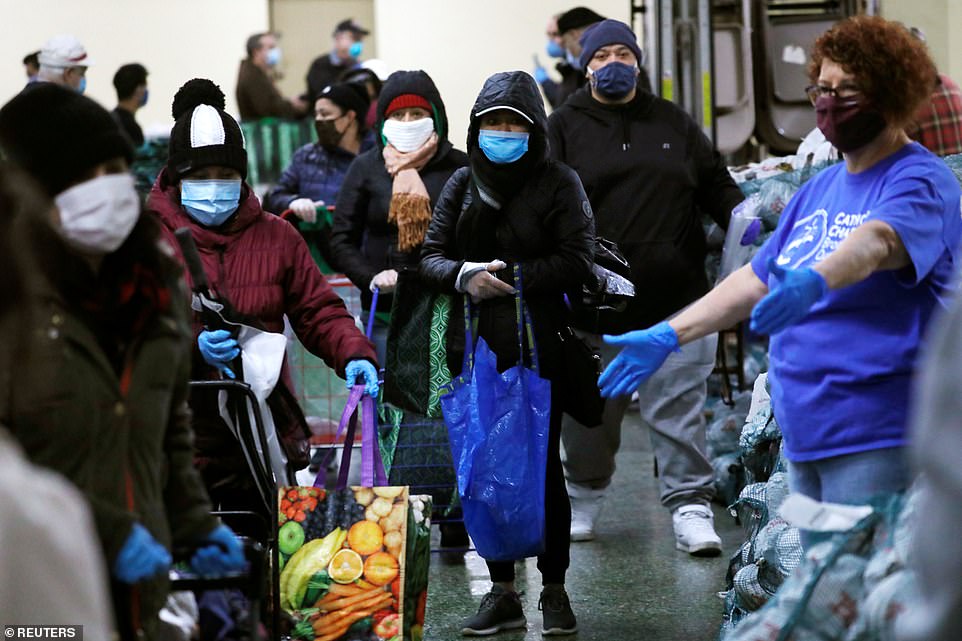 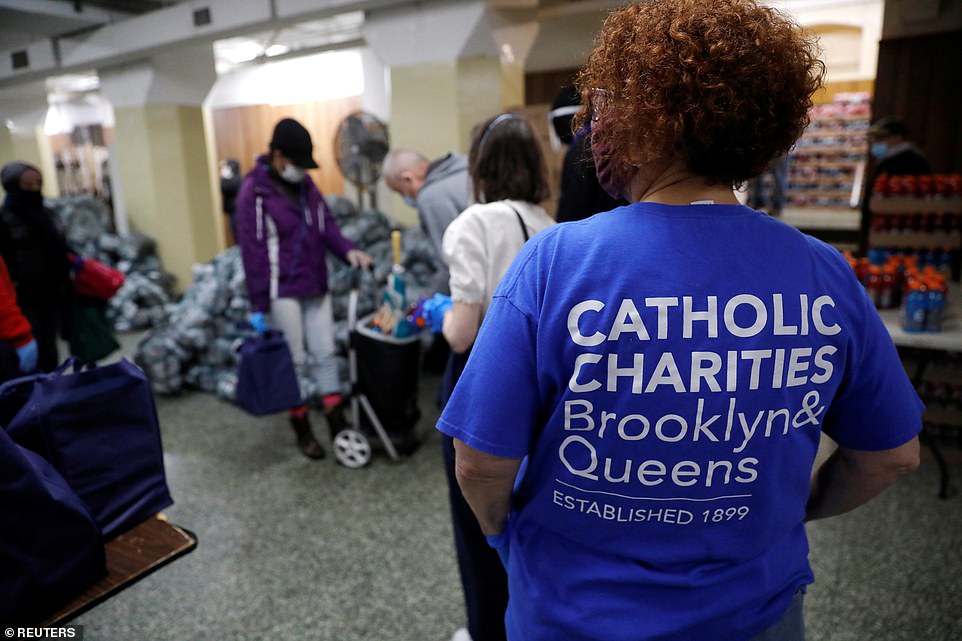 Because of the rain, the food drive started a half hour earlier. Garcia said more than 800 donations of fresh fruit, vegetables, canned goods and soup were given away.

‘It was a wonderful blessing,’ Garcia said. ‘Whoever needed it, they got it.’

Catholic Charities, which on average distributes 83,000 meals per month from within its pantry network has witnessed the impact of the pandemic on New Yorkers.

It says demand has increased across its 20 parish-based food pantries. It has specifically seen an uptick in demand for hot meals from isolated seniors.

Catholic Charities also has held ‘grab-and-go’ style events providing bags of food that will feed a family of three for three days. 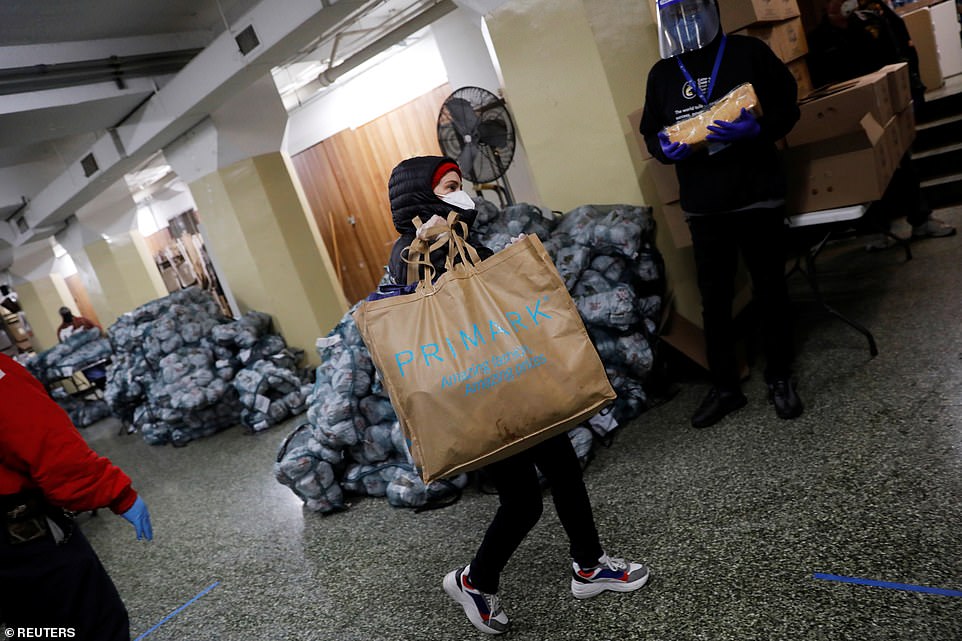 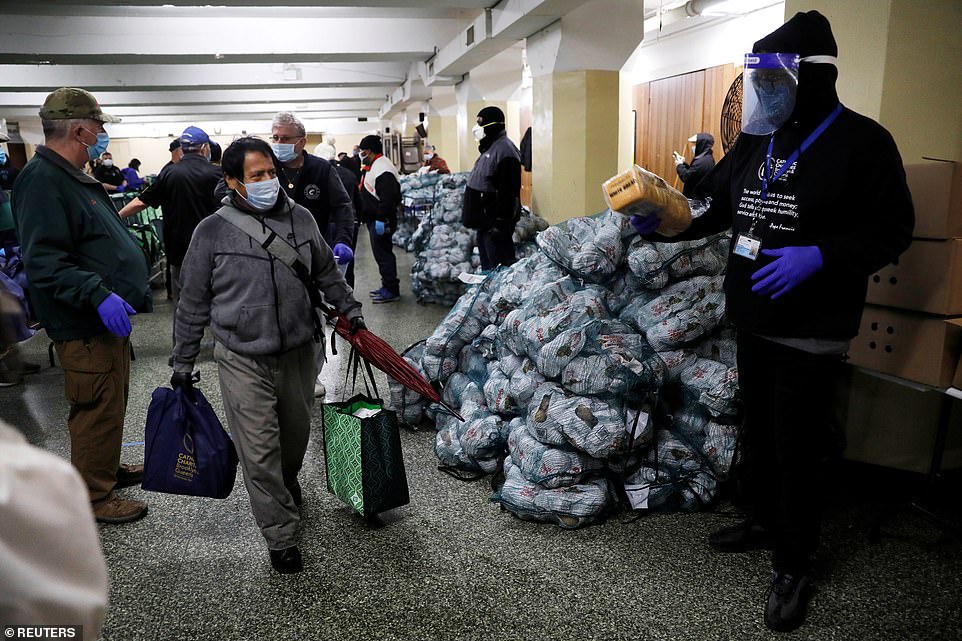 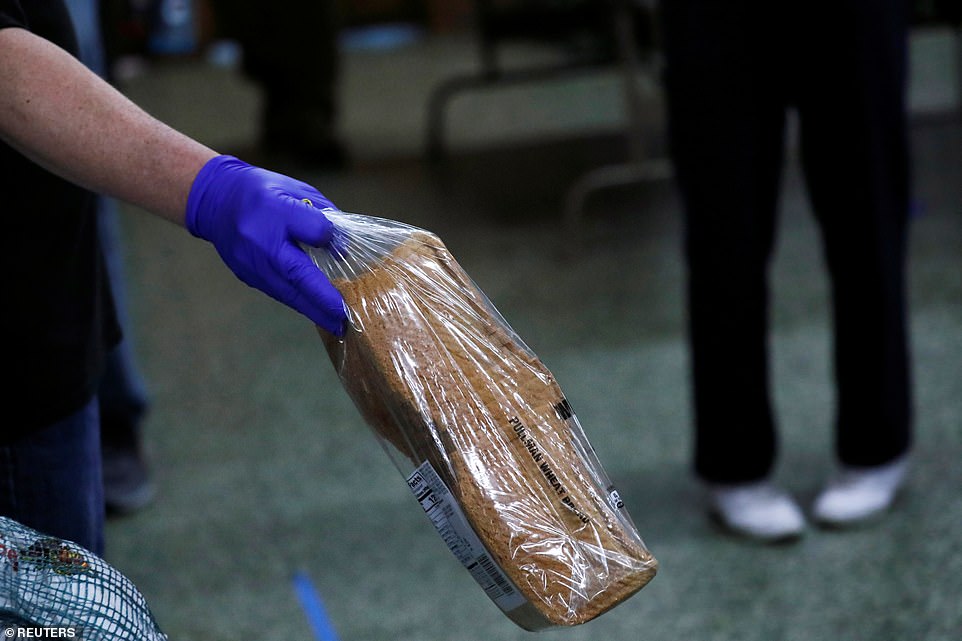 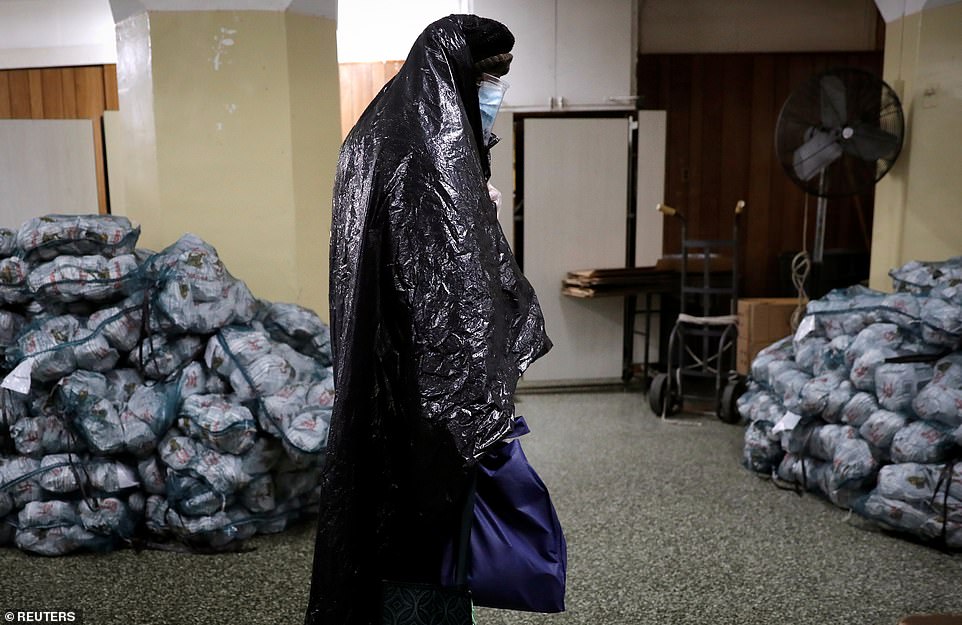 A man who entered the pantry had used a black plastic as a raincoat to cover himself, in addition to wearing a mask for protection against COVID-19 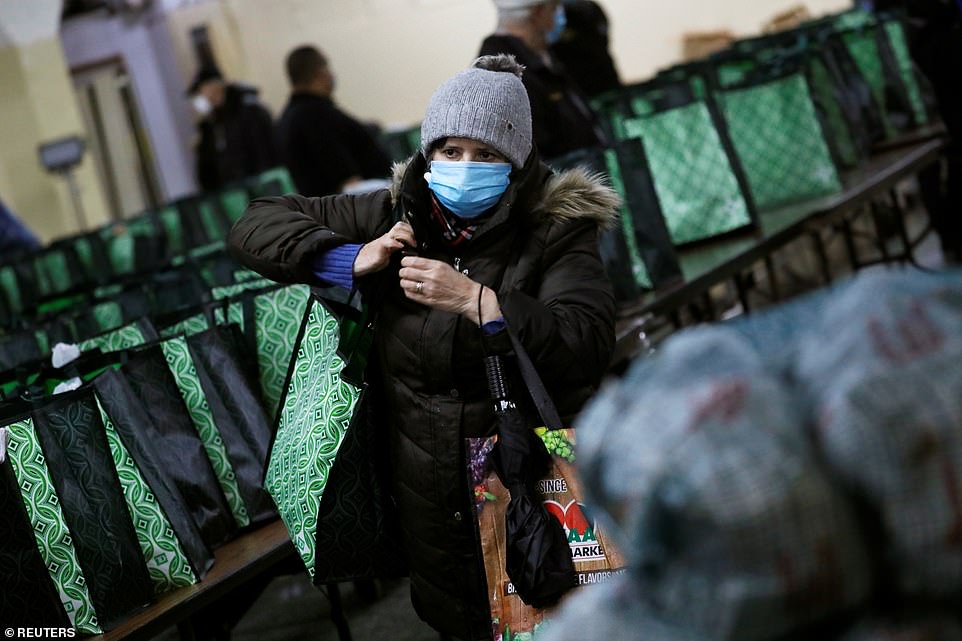 Green bags of food were lined up on tables during the food pantry distribution. A woman takes one of the bags on her way out 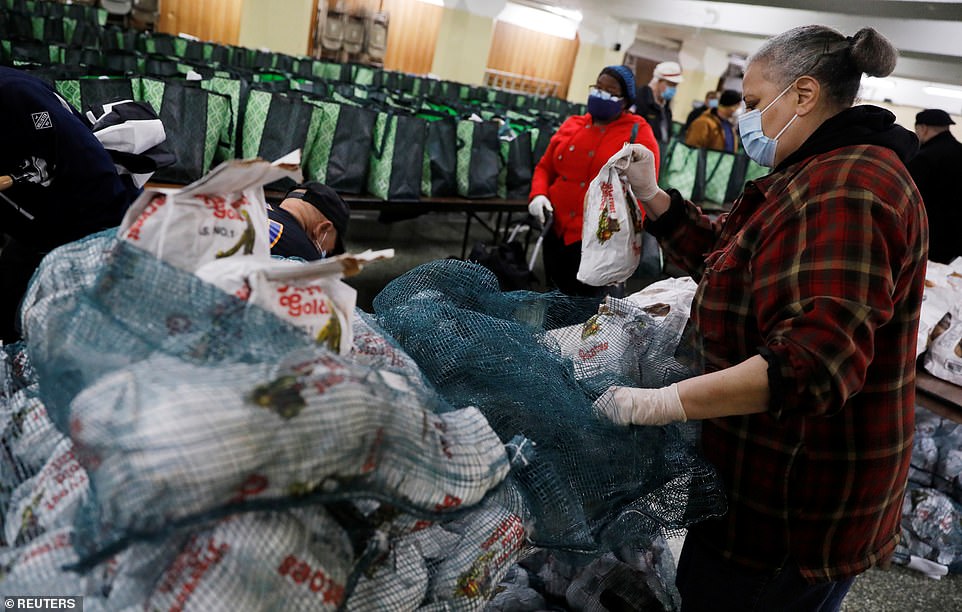 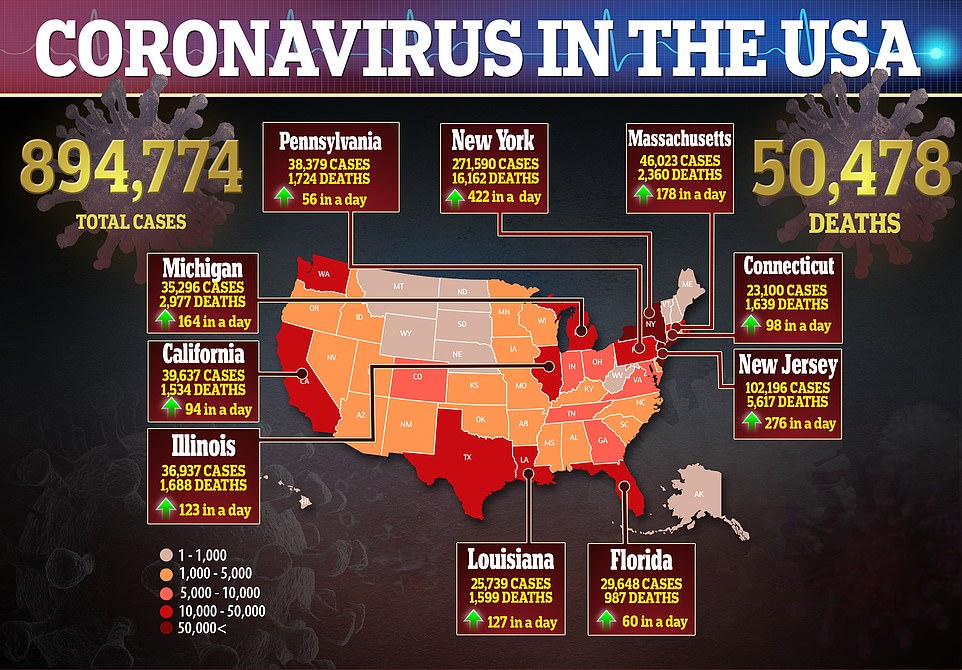 There have been close to 141,800 cases in New York City of the coronavirus, which has been blamed for more than 5,100 deaths. 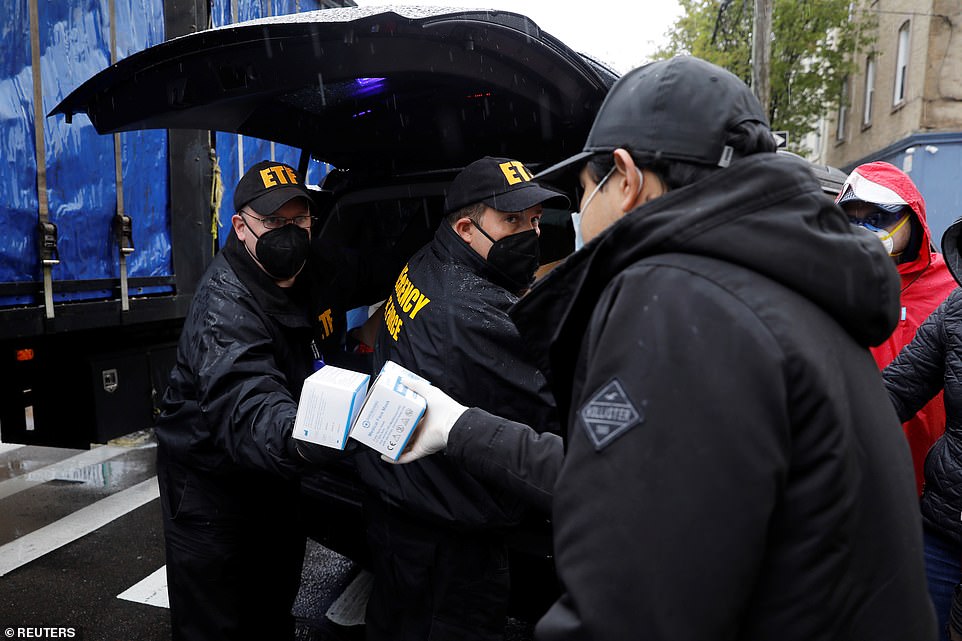 Catholic Charities of Brooklyn and Queens also has held ‘grab-and-go’ style events providing bags of food that will feed a family of three for three days. A man wearing a mask and covering himself with a plastic bag is seen leaving Friday’s event

Earlier this month, hundreds of people lined up outside the Bowery Mission homeless center for a free Easter Sunday meal.

People were similarly seen lining up along the block outside the mission, many of them wearing hats, masks and gloves and practicing social distancing, as they waited for a hot meal.

The homeless center has served the needs of the city’s poor and hungry who arrive to its iconic red doors since the 1870’s.