More than 90% of Mississippi COVID cases are among unvaccinated

As states and cities struggle to deal with a surge of COVID-19, health officials are finding that the majority are cooccurring among unvaccinated people.

More than 90 percent of active COVID-19 cases in Mississippi are among unvaccinated people, Governor Tate Reeves, a Republican, said at a news conference on Wednesday.

He also stated that 90 percent of hospitalized patients in the state were unvaccinated.

Mississippi has the lowest vaccination rate of any state in the country, with only 38 percent of residents having received at least one dose of a COVID vaccine.

Mississippi Gov Tate Reeves encourages his state’s residents to get vaccinated, as 90 percent of active COVID cases are among the unvaccinated 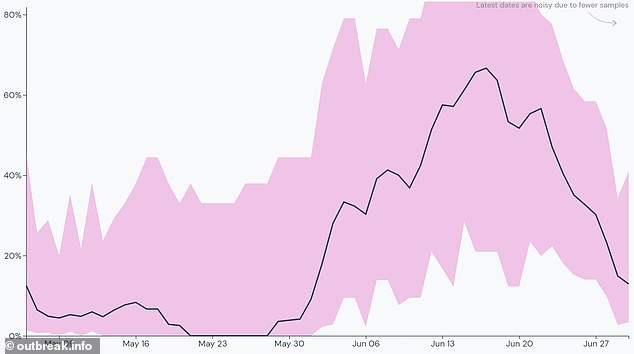 Incidence rate of the Detla variant in Mississippi. The variant accounts for 13 percent of cases in the state, down from where it was weeks before

‘Let me be clear, there is no question that a majority of new cases that were reported today and have been reported over the last week or so have been the Delta variant,’ Reeves said.

‘It appears to be highly contagious and there appear to be bad outcomes.’

Data from Outbreak.info shows that the Indian ‘Delta’ variant, a highly contagious variant that originated in the south Asian nation, accounts for 13 percent of cases in the state.

Reeves urges his state’s residents to get vaccinated in order to protect them from the virus.

‘I continue to encourage my fellow Mississippians to get vaccinated, we have worked exceptionally hard back in January and February to make the vaccine available and readily accessible for any Mississippian who wanted it,’ he said.

He still stands against vaccine mandates, though, and did not say if he was going to offer incentives – like a vaccine lottery – to get more residents vaccinated.

The unvaccinated population of Los Angeles is getting hammered as well. 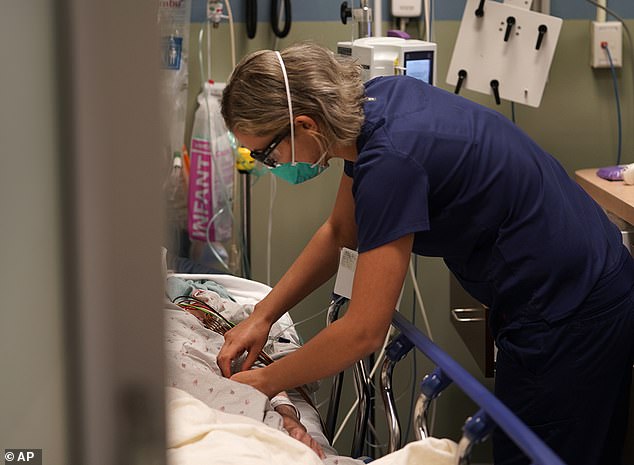 All patients hospitalized with COVID-19 in Los Angeles County are unvaccinated, according to county officials 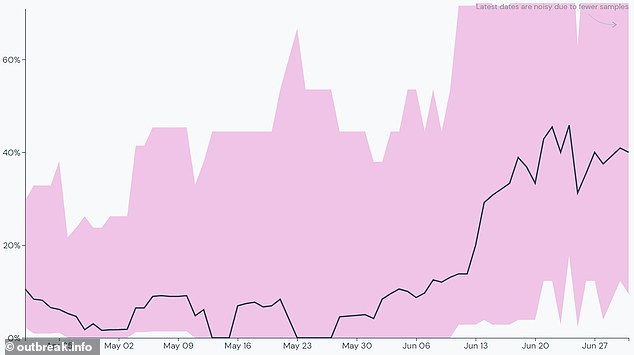 Incidence rate of the Delta variant in Los Angeles County. The variant accounts for 40 percent of new cases in the county

‘To date, we have not had a patient admitted to a DHS hospital who has been fully vaccinated with either the J&J, Pfizer or Moderna vaccine,’ said Dr Christina Ghaly, director of the Los Angeles County Department of Health Services, said during a news briefing on Tuesday.

‘Every single patient that we’ve admitted for COVID has been not yet fully vaccinated.’

She also said that the Delta variant was primarily responsible for new cases in the county.

Around 40 percent of cases in the state are of the Delta variant, per Outbreak.info.

Across the country, the unvaccinated have been hammered by COVID-19 while vaccinated people remain relatively safe.

In May, 99 percent of COVID deaths in the United States were among unvaccinated people.

Cases in the country are beginning to rise once again, especially in unvaccinated pockets of the U.S. south and Midwest.

Currently, 68 percent of American adults have received at least one dose of a COVID-19 vaccine, and 59 percent are fully vaccinated. 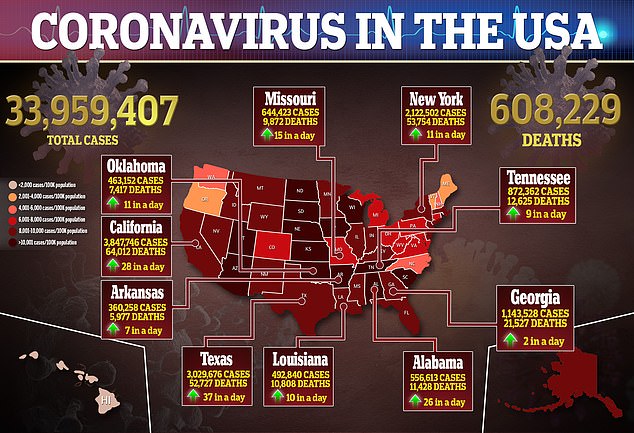