More than 92 per cent of Kurds vote for independence

More than 92 per cent of Kurds in Iraq have voted for an independent state in a disputed referendum that has sparked international concern.

Middle East expert Peter Van Buren said the result proves that Iraq is so divided it effectively no longer exists.

‘In its place is a Shiite state dominated by Iran in the south, the de facto new nation of Kurdistan in the north, and a shrinking population of Sunnis out west,’ he wrote.

More than 92 per cent of Kurds in Iraq have voted for an independent state in a disputed referendum that has sparked international concern. Pictured: Kurds celebrating in Iraq

Pursuing a long-cherished dream of statehood, Kurds held a referendum on Monday despite the central government rejecting it as illegal.

Longtime Iraqi Kurd leader Massud Barzani said the vote would not lead to an immediate declaration of independence and should instead open the door to negotiations for greater autonomy.

But Iraqi Prime Minister Haider al-Abadi said there was no question of talks, insisting Iraqi law would be ‘imposed’.

Kurds around the world have celebrated the result.

Independence supporter Newroz Şengalî told MailOnline: ‘A state is the is the ultimate aspiration for every Kurd. Eight per cent voted no not because they are against statehood but because they think the time is not right. In principal they are still yes voters.’

The post-World War One failure to create a Kurdish state resulted in 30 million Kurds scattered across modern Iraq, Iran, Turkey, and Syria.

The referendum means that in practice Iraq no longer exists. In its place is a Shiite state dominated by Iran in the south, the de facto new nation of Kurdistan in the north, and a shrinking population of Sunnis out west.

In a best-case scenario, where everyone tacitly acknowledges Kurdistan while maintaining the status quo (as with Taiwan, which officially exists as a part of China even as it acts like an independent nation) there may be a measure of stability in the near term.

The question was: ‘Do you want the Kurdistan Region and the Kurdistani areas outside the administration of the Region to become an independent state?’

Kurds, spread throughout Syria, Turkey, Iran and Iraq, have most political autonomy in Iraq where the Kurdistan Regional Government administers their homeland.

But the Prime Minister said the referendum cannot be used as a basis to ask for greater autonomy.

Abadi said: ‘The referendum must be annulled and dialogue initiated in the framework of the constitution. We will never hold talks based on the results of the referendum.

‘We will impose Iraqi law in the entire region of Kurdistan under the constitution.’

Pressure has been mounting on the Kurds since the vote, not just from Baghdad but also from Ankara, with Turkey threatening a range of measures including cutting off key export routes for the region.

The Turkish government fears Kurds will fight harder for independence there too.

The United Nations and United States were among those opposed to the referendum, fearing creating a new country in war-ravaged and volatile region will do nothing to improve stability.

The vote has raised fears of unrest and the possibility of a military confrontation involving the Kurds, who are key allies in internationally backed offensives against the jihadists of the Islamic State group.

In a televised address late on Tuesday, Kurd leader Barzani had urged Iraqi PM Abadi ‘not to close the door to dialogue because it is dialogue that will solve problems’.

‘We assure the international community of our willingness to engage in dialogue with Baghdad,’ he said, insisting the referendum was not meant ‘to delimit the border (between Kurdistan and Iraq), nor to impose it de facto.’ 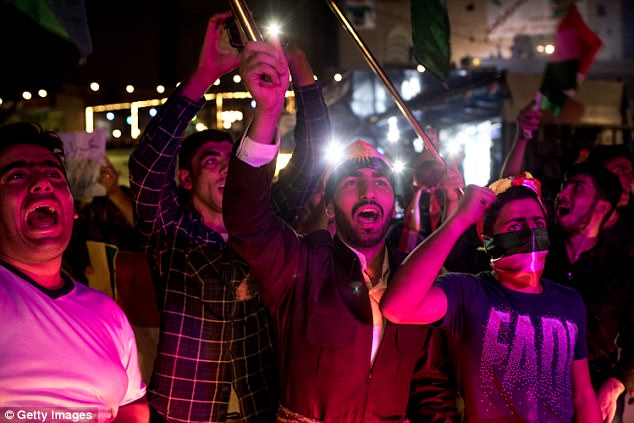 Iraqi Kurd leader Massud Barzani said the vote would not lead to an immediate declaration of independence. Pictured: Kurds celebrating the result