‘Helen was an ex of a gay mum I knew,’ says Karen, 44. ‘We met at a child’s birthday party and spent the afternoon talking and laughing. For a few weeks afterwards, we were messaging – harmless banter, but when my phone pinged, my insides did a little dance. I was completely wired. After a few weeks, it felt too strong to push back down.’ Helen popped up at more social events, and soon the two arranged to meet on their own for a drink. ‘By the end of that evening, we were up against a wall kissing.’

Within months, Karen’s life was unravelling – her marriage, friendships and family relationships: her entire identity as she’d always known it. Two years on, the dust is still settling. Karen and her husband are separating and she plans to introduce her children – both primary-school age – to Helen gradually, in her own time. For now, only those closest know about the relationship. 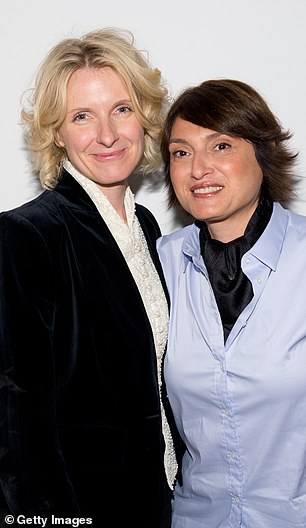 Left: Cynthia Nixon had two children with her male childhood sweetheart before she started dating Christine Marinoni in 2004; they married in 2012. Right: Eat, Pray, Love author Elizabeth Gilbert left her husband for her best friend Rayya Elias, who passed away earlier this year

Karen still isn’t sure how to explain what happened. Nor is she comfortable with labels. ‘I’m asked, “So you’re bi?” – but no, because this is it now. I can’t see myself being with a man again,’ she says. ‘But if I’m gay, then how could I have not known for 40 years? What hurt my husband and my sister was the idea that I’d been hiding the truth – but I wasn’t. When I married, I identified as straight. My life wasn’t a lie. Maybe something that was always there just got bigger – our marriage had stopped working long before I met Helen. Finding her brought everything to the surface.’

‘Switching sides’ – or crossing sexual boundaries – relatively late in life has been in the public eye more than ever recently. Eat, Pray, Love author Elizabeth Gilbert is one woman who ended her marriage to her husband after falling for her best friend. Sex and the City’s Cynthia Nixon had two children with her male childhood sweetheart before meeting the woman who is now her wife. She has expressed similar sentiments to Karen: ‘I never felt as though there was an unconscious part of me that woke up or that came out of the closet; there wasn’t a struggle, there wasn’t an attempt to suppress. I met this woman and I fell in love with her.’

Dr Lisa Diamond, associate professor of psychology and gender studies at the University of Utah, has spent decades studying sexual fluidity and confirms that this common assumption that all late-life lesbians must have been in the closet is not correct. ‘Maybe we prefer that explanation because the alternative is too scary for some people,’ she says. ‘It might mean that none of us knows our sexuality as much as we think. Maybe we, too, could suddenly be surprised.’

So could anyone change sexual preference and hit ‘turning point’? ‘Some individuals are more fluid than others,’ says Dr Diamond. ‘But most of us are capable of change within a certain range. Sexuality isn’t rigid and fixed. We’re born with a biological, genetic influence that creates a “capacity” – but that has to be activated by life experience, your environment, how you’re raised, who you meet.’ (This flexibility doesn’t mean that a sexual attraction can be ‘programmed’ out of you, though. ‘You rarely find that a same-sex attraction will ever disappear completely,’ says Dr Diamond. ‘It seems easier to add attractions than take them away!’)

With women, there are more ‘shades of grey’ – they exhibit more variation in sexual attraction across a lifetime than men. There are many possible reasons for this. One fascinating theory aired last year by the North American Menopause Society was around ‘evolutionary adaptation’. After menopause, having a male sexual partner is no longer biologically important.

But others believe societal values are a more likely explanation. Rick Clemons is author of Frankly My Dear, I’m Gay, a late bloomers’ guide to coming out (rickclemons.com). He believes society is simply more open to women ‘switching’. ‘For most people, two women having sex is OK,’ he says. ‘Two widows who get together late in life are community builders, it’s “sisterhood”, it’s loving and nurturing. If two divorced or widowed men decided to shack up together and have sex, the standard reaction would be, “That’s weird” or “That’s gross”. Society is less accepting.’

So what are the common triggers? One is simply falling in love: meeting the person who makes everything drop into place. But just about any life transition can do it. ‘Usually we’re not taking time to ask, “Where am I going?” and “What do I want?”’ says Dr Diamond. ‘Then you get divorced or your children leave home. You change jobs or move to a new city. Starting over gives you the opportunity to really think about what does and doesn’t make you happy.

‘Sometimes, it can be as simple as meeting other women in same-sex relationships,’ Dr Diamond says. ‘That normalises them and starts you thinking – and lots of women haven’t been encouraged to think about their sexuality much before. You may get to an age where you’re more confident and less bothered by what others think.’ 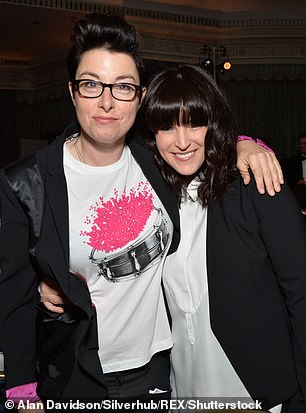 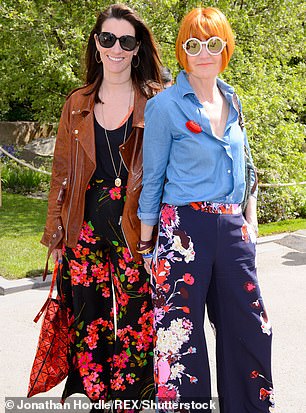 Left: TV presenter Anna Richardson, right, had been in a heterosexual relationship for 18 years when she met girlfriend Sue Perkins. Right: Mary Portas with her fashion journalist wife Melanie Rickey

This was the case for Alice, 37, a nurse, who spent her teens and 20s in straight relationships. She was newly single after living with a man for five years when she ran into an old friend she’d not seen since school. This friend was gay, there was a mutual attraction and things moved very fast. They got married and now have a daughter.

‘When we met, my attitude was a little bit experimental – “let’s just see what happens”,’ says Alice. ‘But soon I realised this is what a relationship should feel like. This is how it was meant to be instead of going through the motions.’ So what had stopped her from experimenting before? ‘I’d never really contemplated anything different to what my friends were doing,’ she says. ‘Those thoughts were probably there but I wasn’t a party animal; I was busy working and I was happy. Why look for anything different?’

For many midlife people, changing sexuality brings very different challenges to those of a teenager coming out. ‘By now, you’ve got a whole life connected to who you are,’ says Clemons, who coaches people struggling with this very issue. ‘When you look at the resources for people coming out, it’s all about youth. It isn’t about how to tell your spouse or support your children – or grandchildren – or manage your in-laws.’

Clemons is speaking from experience. He was 36 with a wife and two young children when he came out (although this was no surprise to him, as he had been hiding his sexuality for many years). ‘When someone asks me how it’s going to affect their children, my answer is that they’re going to be all right as long as the adults don’t mess it up.’

This proved true for Andrea Hewitt, 51, who came out aged 44, after two marriages and with two children, 18 and 13. (There was no other woman involved, just a slow dawning, helped along by therapy and a sense of time running out.) ‘My children were brilliant,’ she says. ‘My 13-year-old son is very logical and he asked two questions: “How is this going to affect my life?” and “Why should I care who you love, Mum?”’

Andrea’s blog, A Late Life Lesbian Story, led her to found a secret Facebook support group in 2016 for women like her. It isn’t advertised and can’t be googled, but it has 1,200 members from every continent except Antarctica. ‘Many are still married and at the beginning of the path,’ says Andrea. ‘They’re asking, “Oh my God, what just happened?” and “What do I do now?”’

Seven years on, Andrea is about to marry her partner Rachel; she has quit her office job as an administrator and now works as a doula; she feels happier and freer than she has ever been before. ‘Breathing is easier,’ she says. ‘It’s as if a weight is off my shoulders and I’ve just got so much energy to be myself. I’m less afraid of living.’ Does she wish she’d done it sooner? ‘I used to – but not any more. I love my life now and everything I’ve done has helped get me to this point. So, no regrets.’ 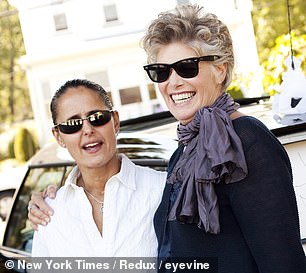 Top Gun actress Kelly McGillis married her first husband in 1979 and her second in 1989. Divorced with two children, she came out as a lesbian in 2009 aged 51. She said, ‘Life is a journey and it’s about growing and changing and coming to terms with who and what you are and loving who and what you are.’ She entered into a civil union with Melanie Leis but they have since split.

Singer Alison Goldfrapp, pictured with partner Lisa Gunning, was outed as a lesbian in 2009, aged 43. She later said, ‘I don’t like to be defined by my sexuality, which swings wherever I like to swing. I’ve had lovely, long relationships with men as well. I just happen to be in a relationship with a lady at the moment.’ 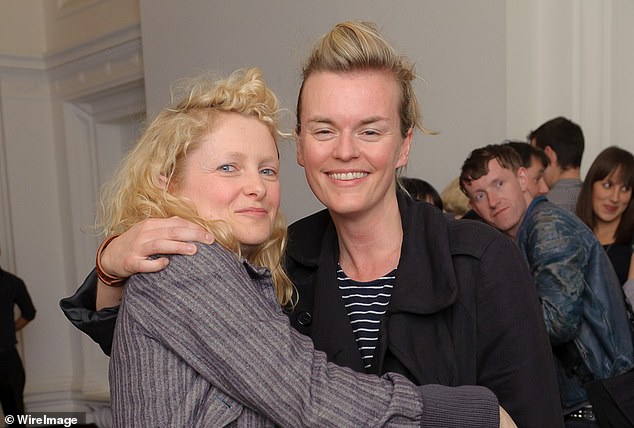 Singer Alison Goldfrapp, pictured with partner Lisa Gunning, was outed as a lesbian in 2009, aged 43 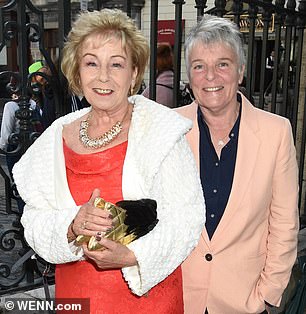 Eilish O’Carroll, 66, pictured with partner Marian O’Sullivan, is best known for playing Winnie McGoogan, the nextdoor neighbour in TV sitcom Mrs Brown’s Boys. She came out as a lesbian at the age of 50. Married twice with grown-up children, she says, ‘I suppose I discovered I was a lesbian at 40. I fell in love with a woman and my life changed completely.’ Eilish ‘postponed that conversation for about ten years. I thought I hid it well, but kids are extremely perceptive. They were so supportive – after telling me they were very angry.’ I was expecting them not to be happy with me being gay. But it was the fact I robbed them of the chance to support me that angered them.’