Obesity storm in a double-D cup: More than half bras sold by Selfridges are 36DD or bigger up from 34B just 11 years ago

The British obesity crisis has been blamed for rapidly expanding busts across the country.

Government figures show 36DDs are now the most commonly sold size, while in 2008 it was a 34B.

The change is rapid since the average 34B bra size in 2008, was the same in the Sixties.

By the 1980s, and with breast enhancement surgery now in its infancy, the average woman had grown again and so had her bust size – up to 34D.

By the 1990s bust sizes increased again, especially as cosmetic surgery started to enter a boom period with surgically enhanced icons from the era such as Pamela Anderson from Baywatch setting trends.

Some have put it down to obesity.

Tam Fry, director at the National Obesity Forum, told The Telegraph: ‘Dress sizes have gone up as women have increased their weight, and the breast is an appendage to the body, so it follows that bra sizes will go up too.

‘Six in 10 of women are no longer a healthy weight and the average dress size is now a 16.’

However it is not just the increase in waistlines which the figures were attributed to.

Fashion has changed so that women no longer want to appear as though they have bigger breasts. While once boosting bras and gel fillers were all the rage – smaller breasts have become fashionable.

Fashion buyer Francesca Rees said: ‘Last year, there was a huge fashion trend in the main market for little triangle bras with soft cups, which come in a small, medium and large.

‘The boost of sales in this area has definitely contributed to the shift that means more of our cup-sized bra sales were larger. 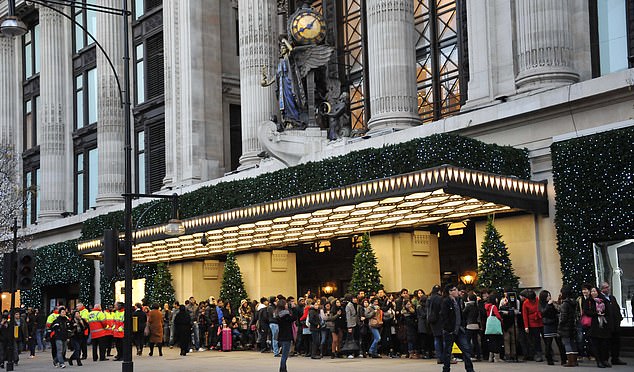 Shops are increasingly catering for larger busts with Selfridges has promising collections to go up to K cups before the end of the year.

Department store Selfridges revealed 53 per cent of bras sold have a CUP size of DD – K, this is across a backsize range from 28 – 38.

These figures would suggest rather than shifting weights, women are increasingly buying smaller back sizes, with bigger cups sizes.

A spokeswoman for the world famous store said this means women are wearing the right size bra after being measured.

Speaking in 2007 after reviewing government figures Bluebella chief executive Emily Bendell said it may be women are more healthy now.

She said work out regimes and diets may be increasing women’s muscle tone and changing the shape of their bodies, giving them larger breasts.