More than half of people waiting for NHS tests in England had been waiting for six weeks or more by April, statistics have revealed.

The Labour Party’s analysis found 470,000 people have been waiting a month-and-a-half or more for potentially life-saving scans and tests.

It is calling for weekly testing of all NHS staff so the health service can get back on its feet and clear the massive backlog of sick patients waiting to be diagnosed and treated.

In February just 2.8 per cent of people booked in for tests had to wait for six weeks, but this had soared to 55 per cent by April because of the Covid-19 pandemic.

Health bosses warned earlier this month that the surgery waiting list, growing because routine operations were cancelled during the Covid-19 crisis, could soar to 10million people by Christmas, with surgeons warning of a ‘significant backlog’. 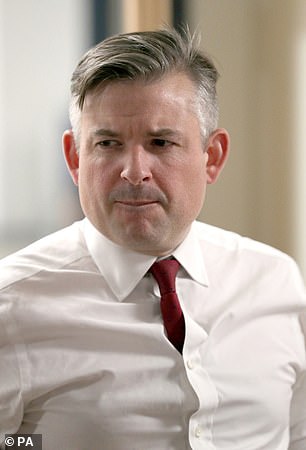 ‘A vital component would be the introduction of weekly routine testing of all NHS staff to keep them and patients safe from Covid-19 while receiving treatment.

‘We’re calling on MPs to support this motion to tackle the rapidly growing queues of their constituents waiting for treatment.’

Labour’s analysis shows that most recent NHS England data has 840,742 people on waiting lists for diagnostic tests and scans.

The biggest six-week-plus waiting lists were for ultrasound scans for reasons other than pregnancy (134,899), and for MRI scans (78,923).

Almost 50,000 people were waiting for CT scans, with another 47,000 waiting for echocardiogram heart scans.

The number of people waiting six weeks or more for an MRI scan – used to diagnose various illnesses, injuries and cancers – rose a staggering 1,277 per cent from 5,733 in February to 78,932 in April.

Waits for sigmoidoscopy, in which a camera is inserted into the rectum to check for bowel cancer or ulcers, have also got significantly longer.

Almost 2.5million patients have missed out on vital cancer tests and treatment because of the pandemic.

The NHS faces the shocking backlog of cases as it tries to return to normal – and also cope with new victims of the disease.

Some of these procedures would have saved lives or extended them, granting precious extra time with loved ones.

It is also thought patients with warning signs of cancer have avoided seeking help because they are worried about contracting coronavirus in a surgery or hospital.

Mr Ashworth added: ‘Ministers tell us the NHS has “coped” through the Covid-19 peak but that was on the back of cancelled operations, delayed scans and diagnostic tests.’

The warning about delayed diagnostic tests comes after surgeons fear a ‘significant backlog’ in the number of patients needing surgery.

The Royal College of Surgeons of England last month published a document advising members on the ‘recovery of surgical services after Covid-19’.

It says: ‘A significant backlog of surgical work is being created in addition to those patients on waiting lists before the present crisis.

‘Retaining an expanded workforce and resources to deal with all of these patients is essential, but illness, fatigue and social issues among healthcare workers all threaten the necessary increase in surgical activity that is needed.’

Earlier this month a report by NHS Confederation, a semi-independent organisation of bosses in the NHS, said the surgery waiting list could hit 10million by Christmas.

Bosses behind the projection said a best case scenario could see 8million people waiting for treatment, if a Covid-19 vaccine or therapy comes along before then.

Experts warned it could take two years to clear the backlog, even if there is no second wave of coronavirus.

NHS Confederation’s report warned services will be operating at around 60 per cent capacity because of new infection control and social distancing measures.

NHS Confederation chief executive, Niall Dickson, wrote to Boris Johnson to prepare the public for the huge waits they will have to face for months after the crisis is over.

He has also called for assurances about supply of personal protective equipment (PPE) for hospital staff.

And the report also called for an extension of the current deal with the independent sector – in which the NHS can use private hospitals to treat its patients – until the end of the financial year ‘to provide capacity to support the NHS to manage the backlog of treatment’.