Residents have lashed out at their council for enforcing ‘ridiculous’ road rules that will see drivers being fined for parking on the nature strip.

One man from Moreton Bay, north of Brisbane, was furious after finding a flyer tucked into his windscreen wipers warning him he would be fined if he didn’t park on the road.

The flyer said that people who are caught stopped or parked on a bicycle path, footpath, dividing or nature strip are breaking the law.

The man said his street was narrow, and parking on the nature strip stopped his car from blocking the road. 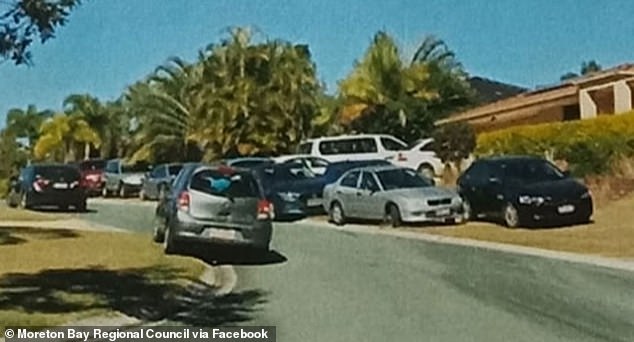 The Moreton Bay Regional Council are cracking down on drivers who park on nature strips or footpaths, issuing warnings to those who do (pictured: cars parked illegally in Moreton Bay)

He shared the photo of the flyer to Facebook, saying ‘the parasites are back’.

‘When we both park on the street there is no room for small trucks or emergency services to come through,’ the man wrote on Facebook, Yahoo News reported.

The post received several comments from other residents in the area, with some saying the council should widen the roads.

‘If the council had insisted on sufficient road widths when development applications were submitted by developers this wouldn’t be an issue,’ one woman commented.

She said the it was just another way for the council to ‘money grab’.

Another said it was a ‘bloody stupid law’.

Others defended the rule, saying the council had been enforcing it since 2011 adding that pedestrians shouldn’t have to walk on the road to avoid a car.

‘Imagine how you would feel if a child had to walk out on the road to get past your vehicle and got hit by another,’ one woman said.

Should drivers be able to park their cars on a nature strip to avoid blocking the road?

There has been several fines for similar incidents within the last year.

Last month in Perth, a man was fined $60 for parking in a driveway for five minutes while dropping a child off at home from school.

The penalty said the car was hanging over the footpath and was inconvenient for pedestrians.

Another man was fined earlier this year for parking across his neighbour’s ‘unusable’ driveway in Sydney.

He was fined $263 even though his neighbour had said he could park there, and the driveway was too narrow for any cars to fit.

One woman was fined $263 for parking on her own lawn in Orange, New South Wales.

A spokesperson for Moreton Bay Regional Council told Daily Mail Australia they were implementing a campaign to advise residents of the road rules.

‘Council is implementing a public awareness campaign across the region, advising residents of parking regulations in accordance with the Queensland Road Rules,’ the spokesperson said.

‘Residents have been responding well to the advice and there have been no issues.

‘Part of the public awareness campaign addresses built-up areas, like North Lakes, because parking is at a premium in residential areas that are close to business districts, school zones and similar high traffic areas.

‘Fines are issued if local laws officers deem there is an immediate public safety risk, illegal or dangerously parked vehicles.’ 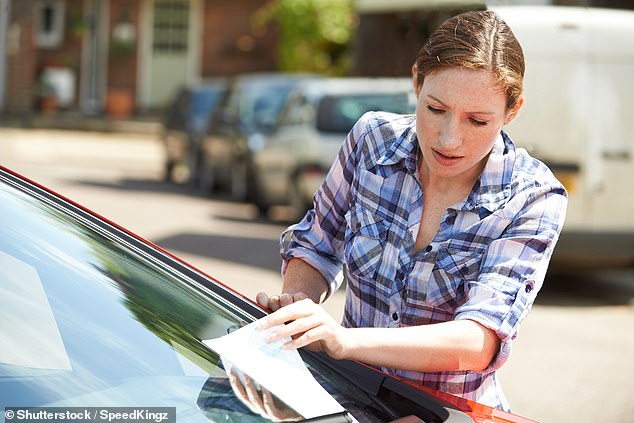