Mormon missionary returns to Utah after being freed from Venezuelan prison

A Mormon missionary who was just freed from a Venezuelan jail where he had been hauled up for two years has finally been able to return home to Utah.

Joshua Holt, 26, flew into Salt Lake City International Airport on Monday night with his wife and her daughter just two days after being released from the prison following a two year horror ordeal.

‘We finally got our freedom,’ an exhausted but grateful Holt said as he arrived home to a tearful, cheering crowd holding signs with messages including: ‘We never gave up’.

‘Man, that was a long vacation,’ Holt joked as he thanked everyone who helped him and his wife Thamara Caleno eventually get released from the jail.

‘I don’t even know how many days it’s been. We’ve gotten, like, maybe four hours of sleep in four days.

‘There were times – many, many times – when I started to blame God… But he’s the one who got me through it.’

Joshua Holt, 26, flew into Salt Lake City International Airport on Monday night with his wife Thamara Caleno and her daughter just two days after being released from the Venezuelan prison 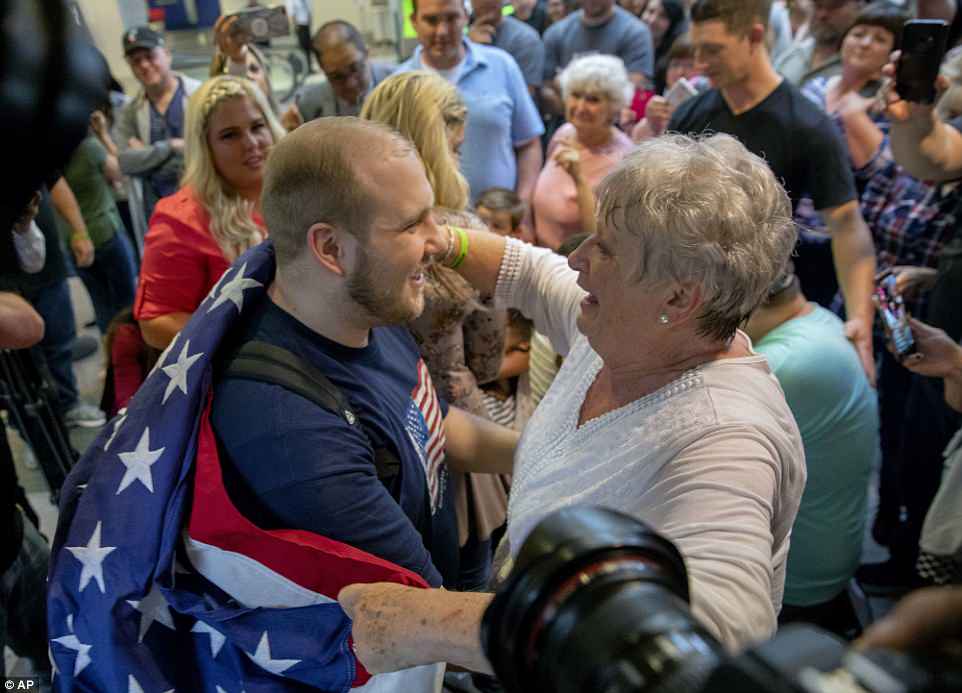 His grandmother Linda Holt draped an American flag around his shoulders as he exchanged long hugs with his siblings while the crowd sang ‘The Star-Spangled Banner.’

It was a homecoming his family and parents, Laurie and Jason Holt, had worked tirelessly to bring about.

Holt had traveled to Caracas in June 2016 to marry a fellow Mormon he had met online while looking to improve his Spanish.

The pair were waiting for Caleno’s US visa when they were arrested at her family’s apartment in a government housing complex.

Holt and his Venezuelan wife were locked in a Caracas jail alongside some of the country’s most-hardened criminals – and President Nicolas Maduro’s top opponents – for what the US government argued were bogus charges of stockpiling weapons.

His parents had been through the emotional rollercoaster of believing their son would be released only to watch mediation efforts unravel at the last minute on at least three occasions under both the Obama and Trump administrations. 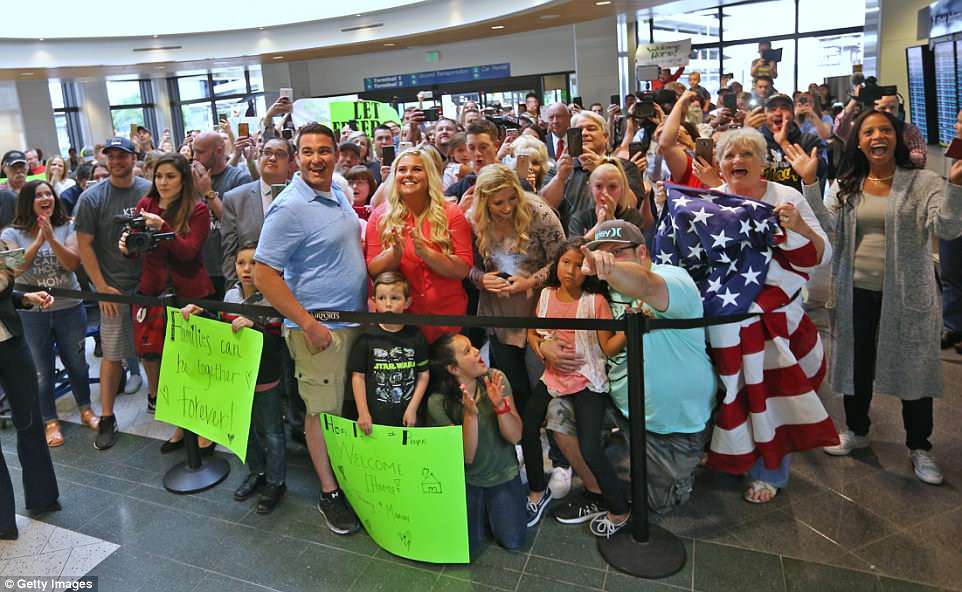 An exhausted but grateful Holt arrived home to a tearful, cheering crowd holding signs with messages including: ‘We never gave up’ 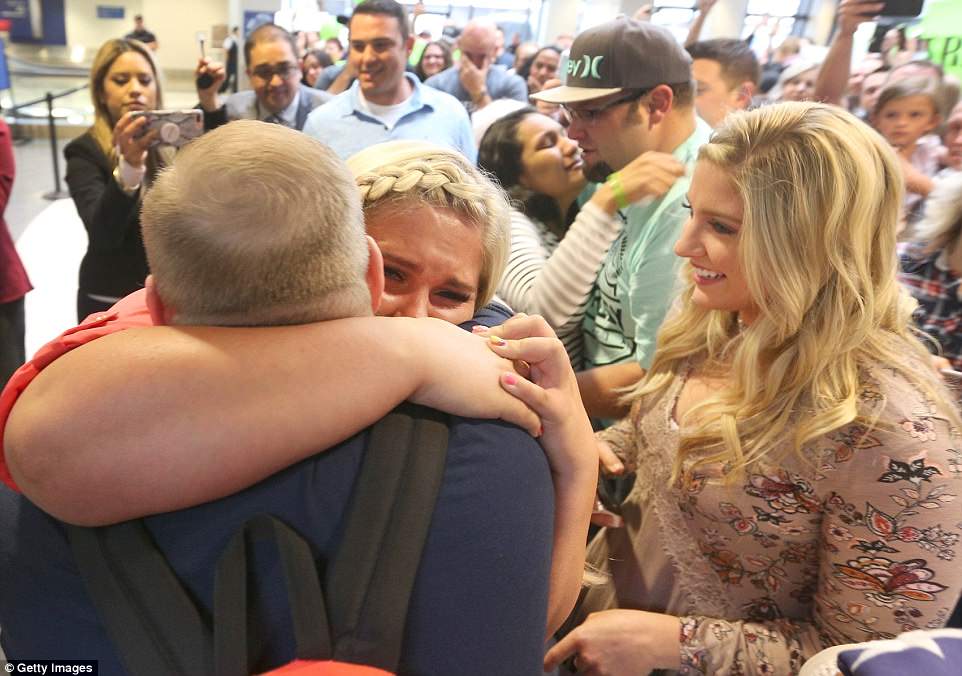 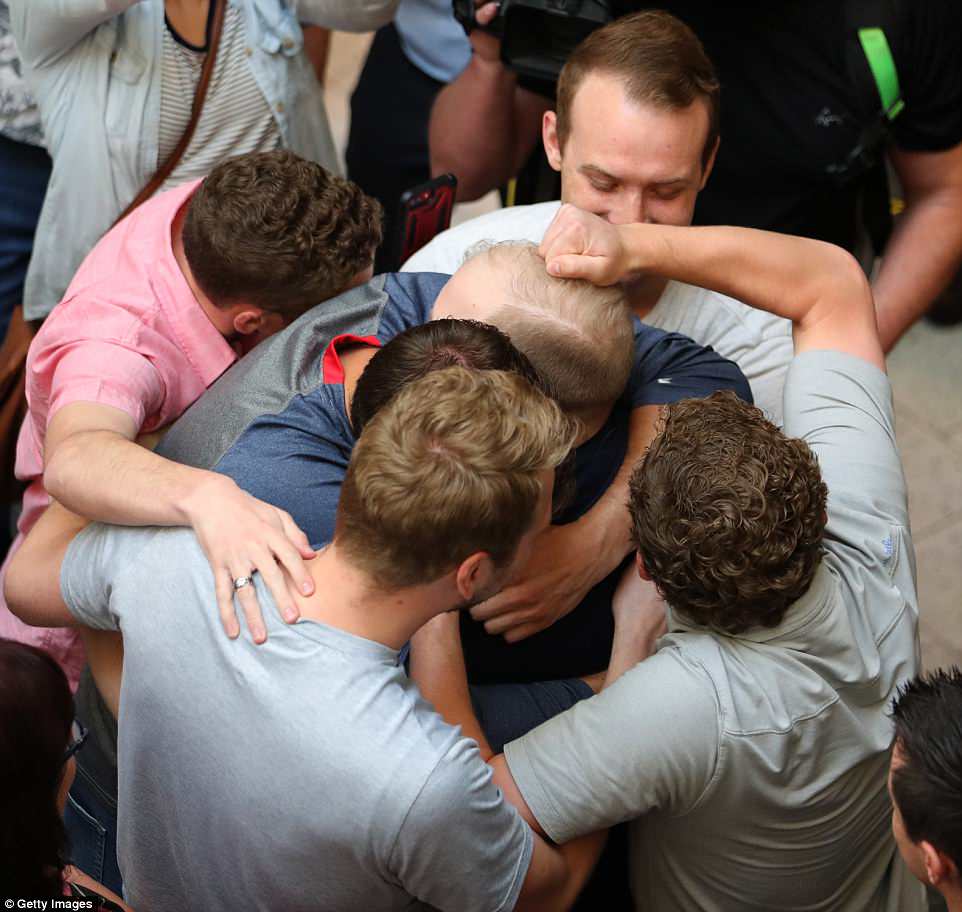 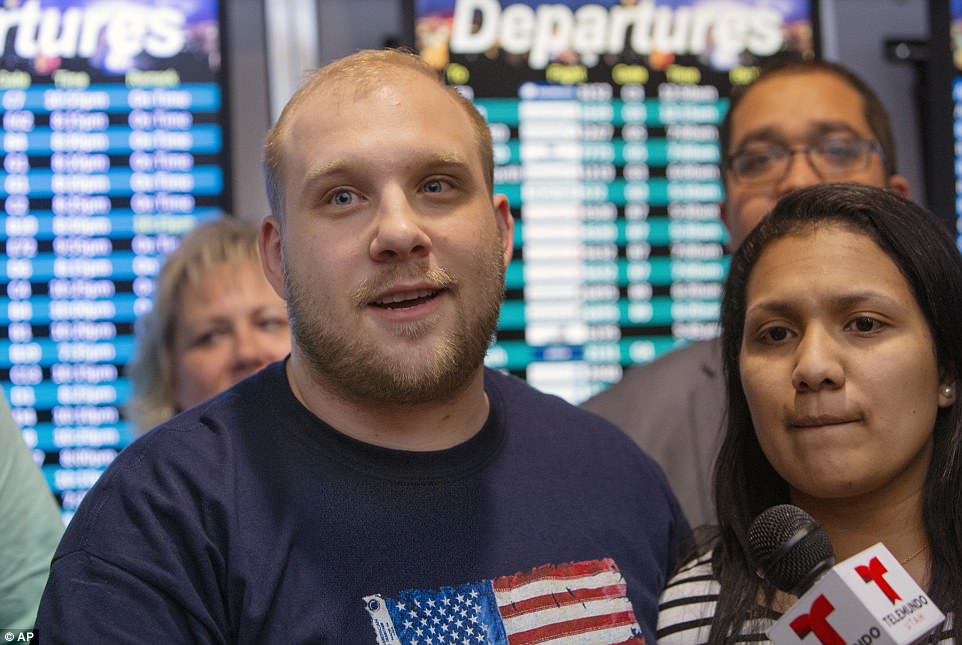 ‘We finally got our freedom,’ an exhausted but grateful Holt said as he arrived home to a tearful, cheering crowd holding signs with messages including: ‘We never gave up’ 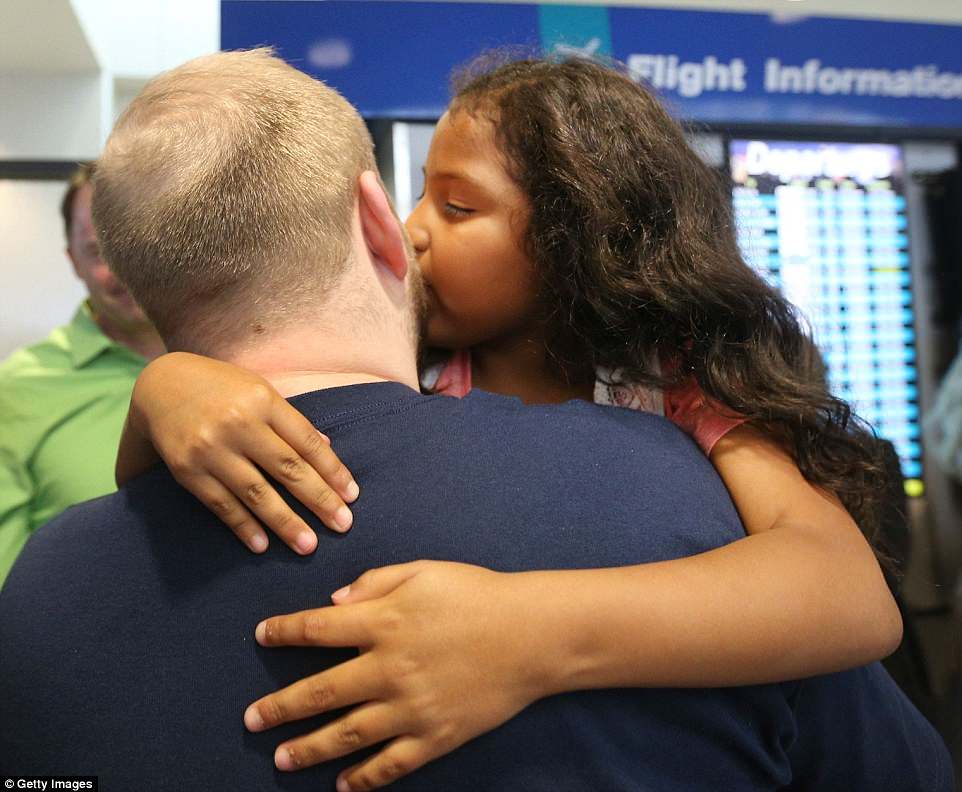 Holt was greeted by Caleno’s daughter from a previous relationship, 7-year-old Nathalia Carrasco, who has been living at his mother Laurie’s home since February

But they woke at 4.30am last Saturday to a phone call from Republican Sen. Orrin Hatch’s office that they had been anxiously anticipating for two years.

‘They called us at 4.30am and said: ‘You need to be on the plane. Josh is coming home’,’ Laurie said, recalling how they had to pack and get to the airport in 90 minutes.

‘This was the first time they actually said: ‘Get to DC, he’s being freed’.’

His mother said she while they had engaged in a long hug on Saturday, she couldn’t wait to sit down with her son given they’ve had little time to speak.

The whole family was whisked away to the White House for a meeting with President Donald Trump before Holt and his wife checked into a government hospital for a battery of medical tests.

Laurie said her son was in good health but had lost weight, suffered a number of bronchial problems in prison and had a rotten tooth that needed checking out.

His wife, Caleno, has more serious pain issues on one side of her body.

Experts in treating people who have been held in captivity have debriefed the couple so that they can begin dealing with the emotions from their long ordeal. 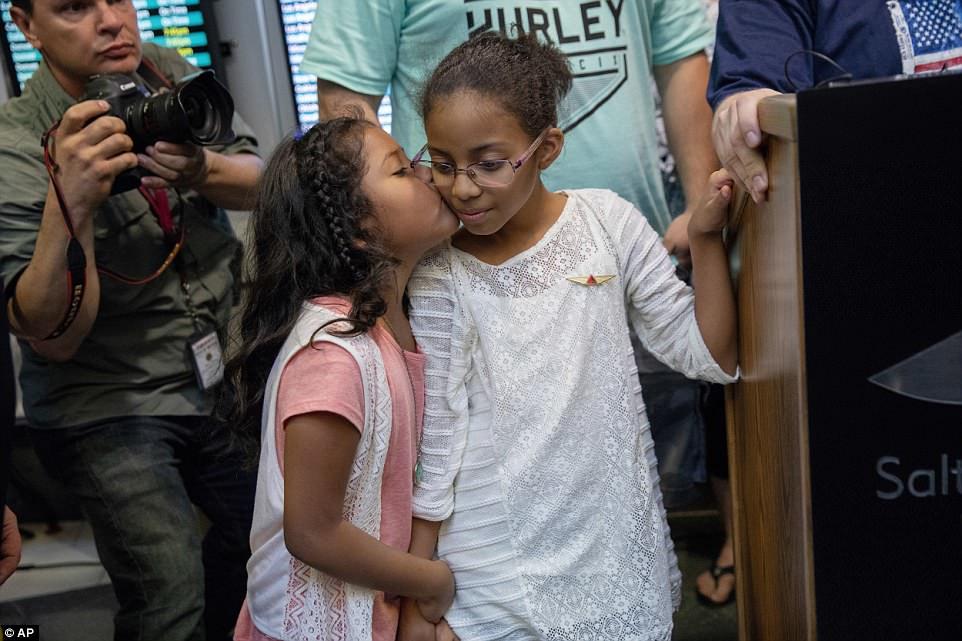 Caleno’s daughter from a previous relationship, 7-year-old Nathalia Carrasco, who has been living in the US since February greets her sister Marian who traveled with the couple from Caracas 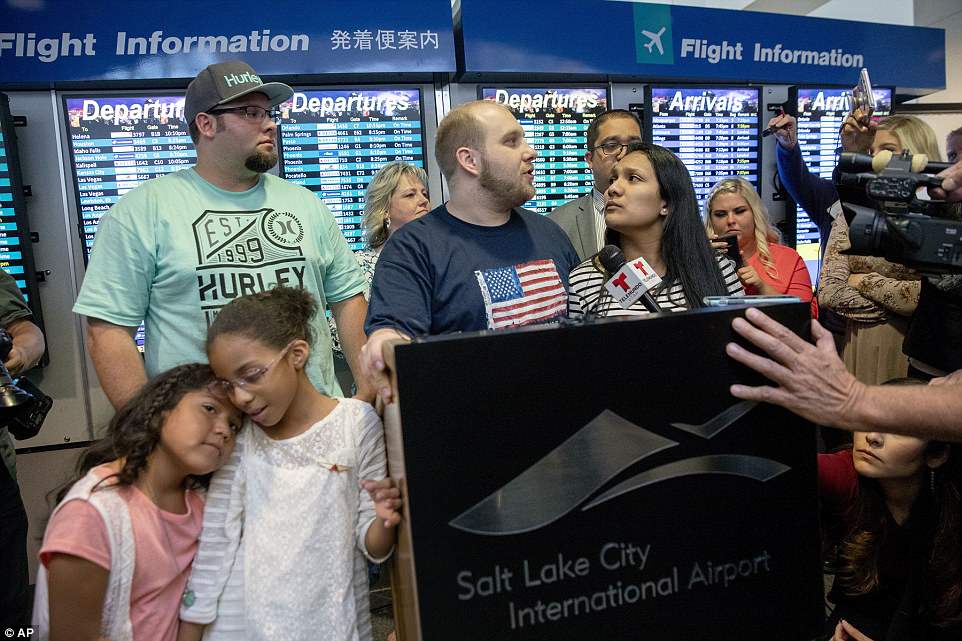 ‘Man, that was a long vacation,’ Holt joked as he thanked everyone who helped him and his wife Thamara Caleno eventually get released from the jail 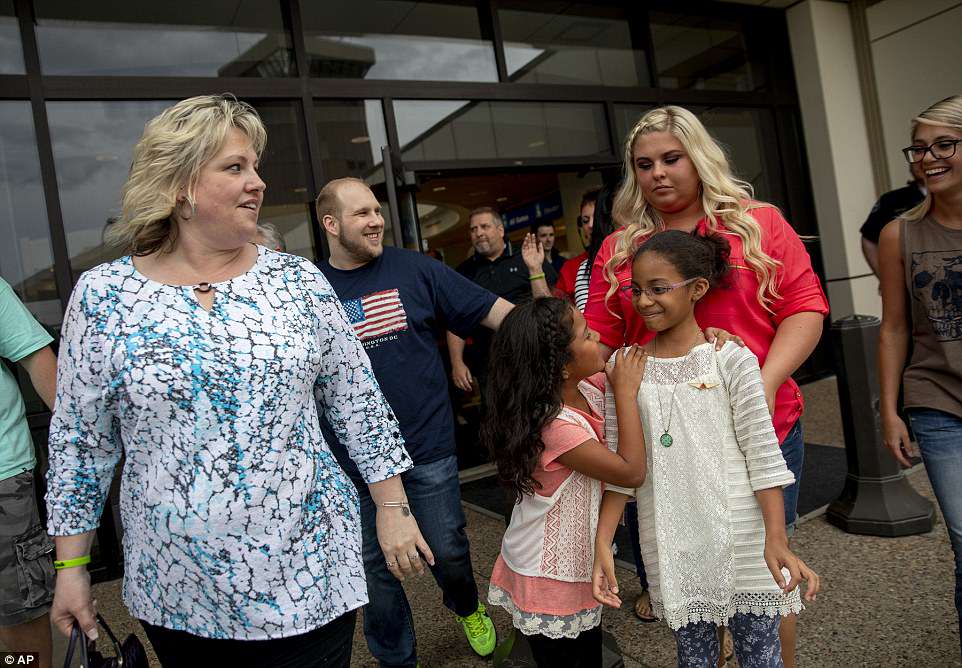 ‘He’s not the same Josh that left,’ Laurie said. ‘He just doesn’t quite have that sparkle back yet in his eyes. He’ll come back, I know he will. We just have to give him time.’

His Salt Lake City welcoming committee included Caleno’s daughter from a previous relationship, 7-year-old Nathalia Carrasco, who has been living at Laurie’s home since February. Caleno’s other daughter, Marian, traveled with the couple from Caracas.

Laurie said she thinks Maduro – fearing retaliation from the US – decided to finally act after her son appeared in a clandestinely-shot video from jail on the eve of this month’s presidential election railing against the Venezuelan government, saying his life had been threatened in a prison riot.

Maduro never publicly mentioned Holt’s imprisonment even as it became a major irritant in relations between the already-hostile governments.

Laurie said she’s also appreciative of Corker’s Venezuelan counterpart in the talks, Rafael Lacava, a governor close to Maduro who escorted the Tennessee senator and Holt back to Washington on a jet belonging to Venezuela’s state-owned oil company.

In a photograph taken at the airport in Caracas, Holt can be seen standing alongside Lacava holding a Venezuela national soccer team jersey emblazoned with the governor’s name.

Trump on Friday night called Corker in Caracas and spoke to Lacava briefly to express his appreciation for Holt’s release, according to two US officials with knowledge of the call. 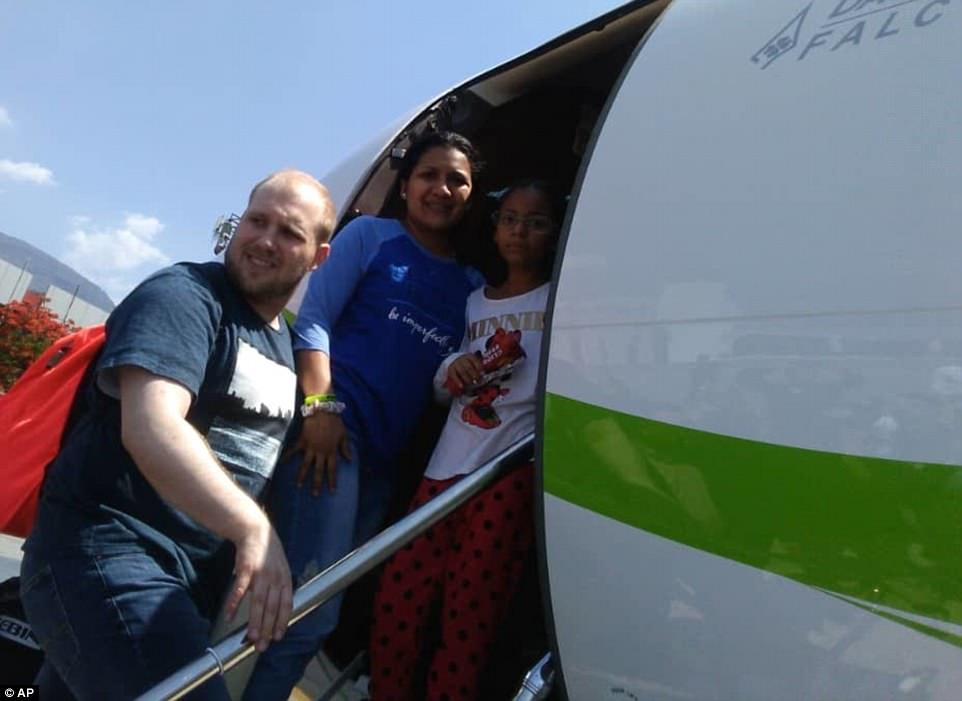 Josh Holt, his wife Thamara and her daughter were pictured boarding a plane at the airport in Caracas, Venezuela on Saturday 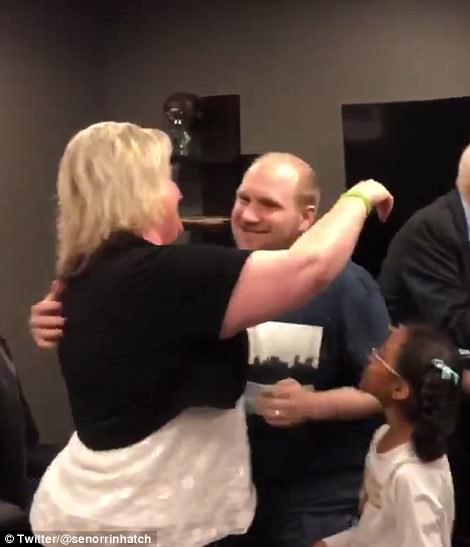 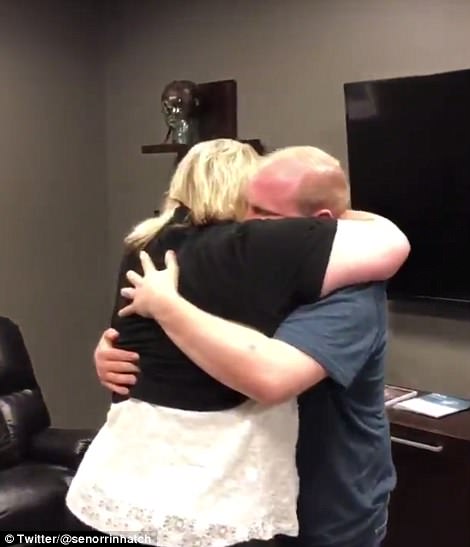 Joshua Holt, who has been imprisoned on weapons charges in Venezuela for nearly two years, was reunited with his parents on Saturday for the first time 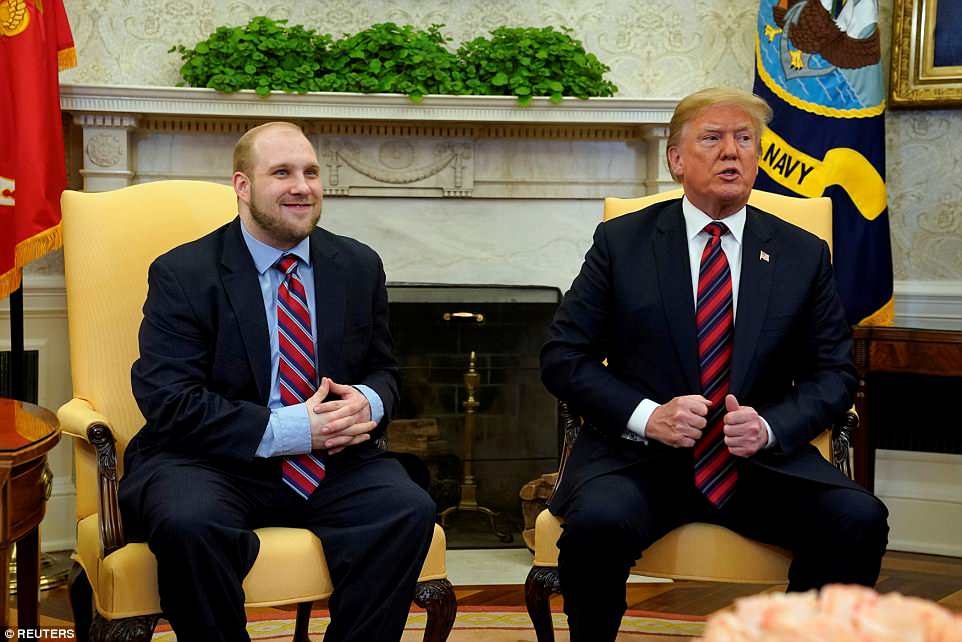 Finally, Laurie credited Wilmer Ruperti, a government-connected Venezuelan shipping magnate, with keeping her son safe in jail. Ruperti flew to Salt Lake to meet her family and had been paying for Holt’s lawyers. But when his involvement in the case was revealed by the AP it was met with skepticism because he had also been funding the defense of two nephews of First Lady Cilia Flores who were convicted in New York in 2016 of drug trafficking.

Corker said that when Lacava traveled to Washington in March the possibility of the nephews’ release was discussed, as well as some sort of sanctions relief at a time Trump was threatening an oil embargo on the OPEC nation.

‘All of those things were discussed but we told them it could not happen,’ Corker said in an interview Monday, insisting that ‘nothing was asked, nothing was given’ in exchange for Holt’s freedom.

The nephews are still imprisoned.

Corker said he’s not sure where US-Venezuelan relations are heading and declined to comment on bipartisan legislation before his committee that aims to further isolate Venezuela’s government and provide humanitarian assistance. But the Republican, who is retiring this year, said it’s important for the US to continue to speak out against the ‘many, many bad things’ the Maduro government has done.

Nonetheless, he said the hardliner approach can only go so far and dialogue with adversaries, as demonstrated by the Trump administration’s willingness to talk with North Korea’s leader, can deliver tangible benefits.

‘In my conversations privately, I could not be more strident in my criticisms of the way the Venezuela government has handled itself. I’ve seen in Venezuela people lined up outside grocery stores just to buy toilet paper,’ Corker said.

‘But if we are engaging with Kim Jong Un, who executes his relatives with high-power artillery at close range, then it would seem to me that engaging with Venezuela, while keeping on all the pressure that we have, would also make some sense.’