Stormy Daniels said on Sunday night that she made the decision to appear on 60 Minutes after President Trump’s lawyer Michael Cohen suggested that she was a liar in an interview earlier this year.

That was not the only issue the panel had either, suggesting that Anderson Cooper and Daniels may have made a deal beforehand given the fact that he never really pressed her on any questions during the course of the interview.

False prophet: ‘The fact is, Stormy Daniels is not very credible. She signed false statements,’ pointed out Turley (Cooper and Daniels above on 60 Minutes)

‘The fact is, Stormy Daniels is not very credible. She signed false statements,’ pointed out frequent guest Jonathan Turley.

‘That doesn’t mean what she’s saying is not true. As you know, Joe, we deal with people all the time that have less than perfect records. But we’re really still wondering what is in that safe and also what is their concrete this terms of evidence that we haven’t really seen yet?’

The lawyer went on to explain: ‘What is clear now this ball is in play. That nondiclosure agreement has been blasted into small bits. What we will see in the next few days will be very important.’

Just before that, Scarbororough was speaking about the 60 Minutes interview and Daniels’ motivation, noting: ‘We still don’t really know what Stormy Daniels wants and why she wants it other than a big payday.’

Turley jumped in at that point, saying:  ‘You know, Anderson Cooper didn’t pursue those questions so we don’t know what will come out after this interview.’

He then joked: ‘Anderson felt about as comfortable as Alistair Cooke on Masterpiece Theater introducing Debbie Does Dallas to the audience. It was a very awkward interview and a lot wasn’t addressed.’

Scarborough then used the example of the man Daniels said had threatened her in a Las Vegas parking lot back in 2011, asking why Cooper opted not to ask anything about his appearance or name or any single identifying factor that Daniels might be able to provide

‘Well there was a lot of lack of follow-up including on credibility,’ remarked Turley.

‘Those types of disconnects weren’t followed up.’

Avenatti was criticized for his decision to tease and then withhold information on Morning Joe as well, with the decision leaving host Joe Scarborough in disbelief.

‘You showed a CD and teased you had information on there. What’s the triggering point for you to go ahead and show the world what’s on the CD? What has to happen first?’ asked Scarborough at one point.

‘Because you said that they had to threaten you. They’ve already threatened you.’

The talk later shifted to the individual who allegedly threatened Daniels in 2011, with Scarborough pointing out that no description of the man was given on the program.

Avenatti revealed that Daniels could describe the man and thought he was very good looking after she encountered him in 2011 for the first time.

He did not go into any further detail. Weathering the storm: ‘She was prepared to discuss intimate details relating to Mr Trump,’ Avenatti revealed on Today (Trump and Daniels above in 2006)

Daniels said she was threatened by that man to keep silent about her alleged sexual encounter on Sunday.

She said in the interview that she had one encounter of consensual sex with the future president.

She did not allege however that she was coerced into the encounter with the real estate scion, saying, ‘This is not a Me too. I was not a victim.’

The adult film actress provided little new evidence of her alleged 2006 affair with Trump but said she faced intimidation tactics aimed at ensuring her silence in 2011.

Daniels said that in the incident, in a parking lot, the man told her: ‘Leave Trump alone. Forget the story.’

She claimed he then looked at her daughter and added: ‘That’s a beautiful little girl. It’d be a shame if something happened to her mom.’

Daniels received a $130,000 payment days before the 2016 presidential election for her silence and has sought to invalidate that agreement in recent weeks.

The White House did not immediately comment on the interview, though Trump, has denied the allegations mutliple times in the past through spokespeople and lawyers including Cohen, who claims that he paid the $130,000 out of his pocket.

He has also stated that neither the Trump Organization nor the Trump campaign was a party to the transaction with Daniels and he was not reimbursed for the payment.

Avenatti provided evidence to 60 Minutes however that showed documents with Cohen using his Trump Organization email address in setting up the paymen.

There was also evidence that the nondisclosure agreement was sent by FedEx to Cohen at his Trump Organization office in Trump Tower.

In the interview, Daniels described a sexual encounter with Trump that began with him talking about himself and showing her an issue of a magazine with his picture on the cover.

She then asked: ‘Does this normally work for you?’

That threw Trump off guard she claimed, going on to explain: ‘And I was like, “Someone should take that magazine and spank you with it.”‘

Daniels then ordered Trump to drop his pants and ‘gave him a couple swats’ in playful manner she said to Cooper.

She said they talked some more after that and that she became more comfortable when he stopped speaking about himself.

‘He was like, “Wow, you – you are special. You remind me of my daughter.” You know – he was like, “You’re smart and beautiful, and a woman to be reckoned with, and I like you. I like you,”‘ said Daniels.

The pair had dinner in Trump’s room she said and then had sex.

He didn’t use a condom, she said, and she didn’t ask him to. Afterward, he asked to see her again, she said.

Daniels said that before they had sex Trump had broached the idea of her being a contestant on The Apprentice, and she likened it to a ‘business opportunity.’

After the alleged tryst she said he called her several times and would ask if they could get together again and would claim that he had an update for her about the Apprentice.

She said she felt that he was holding out the opportunity to keep her coming back.

‘Of course. I mean, I’m not blind. But at the same time, maybe it’ll work out, you know?’ said Daniels.

In July 2007, a year after they had met, Daniels said Trump asked to meet with her privately at the Beverly Hills Hotel in Los Angeles. She said they did not have sex, but he wanted to.

Daniels reported that Trump called her the following month to say he had not been able to get her a spot on his TV show. She said they never met again.

When asked why she was deciding to speak now, Daniels said: ‘Because it was very important to me to be able to defend myself.’

She said she was not all that bothered by what other people thought of her, but had a big issuer with being portrayed as someone who did not tell the truth. 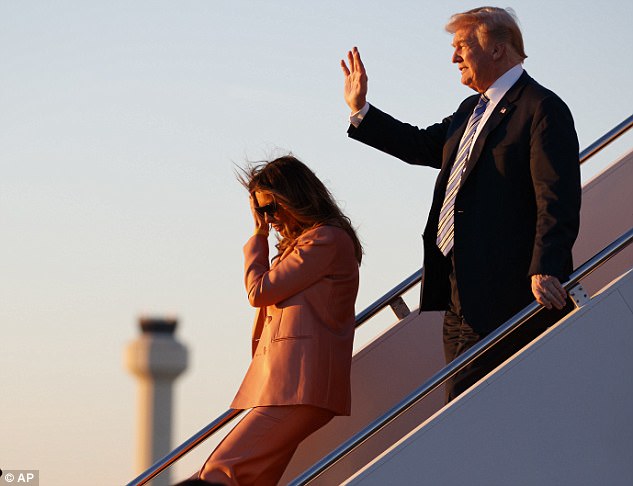 Troubles: Melania Trump (above with President Trump on Friday) is spending the week in Palm Beach while he husband returned to DC on Sunday

Tweet it” ‘So much Fake News. Never been more voluminous or more inaccurate. But through it all, our country is doing great!’ tweeted President Trump on Monday (above)

‘I’m not OK with being made out to be a liar, or people thinking that I did this for money and people are like, “Oh, you’re an opportunist. You’re taking advantage of this,”‘ said Daniels.

‘Yes, I’m getting more job offers now, but tell me one person who would turn down a job offer making more than they’ve been making, doing the same thing that they’ve always done?’

Cooper noted during the interview that Melania Trump had given birth just a few months before the alleged encounter between the two.

‘Did he mention his wife or child at all in this?’ asked Cooper.

‘I asked. And he brushed it aside, said, “Oh yeah, yeah, you know, don’t worry about that. We don’t even, we have separate rooms and stuff,” said Daniels.

Just a few days prior, former Playboy model Karen McDougal told Cooper in a CNN interview that her affair with Trump began at a bungalow at the Beverly Hills Hotel in 2006. McDougal said she ended the relationship in 2007 out of guilt.

McDougal has filed suit in Los Angeles seeking to invalidate a confidentiality agreement with American Media Inc., the company that owns the supermarket tabloid National Enquirer. It paid her $150,000 during the 2016 presidential election.

The lawsuit alleges that McDougal was paid for the rights to her story of an affair, but the story never ran. It also alleges that Cohen was secretly involved in her discussions with American Media.

Trump is also facing a New York defamation lawsuit filed by Summer Zervos, a former contestant on The Apprentice.

Zervos has accused Trump of unwanted sexual contact in 2007 after she had appeared on the show with him, and sued after he dismissed the claims as made up.

A judge ruled the lawsuit can move forward while the president is in office.