Driving into Mornington off the Peninsula Freeway residents rightfully feel a long way from the big smoke.

Positioned 57kms south of Melbourne, it is known for its ‘village’ feel and is the gateway to some of the most expensive beachside homes in Victoria.

The drive into Mornington is accompanied by large stretches of farmland, orchards and the odd winery.

Local Portsea cafe worker Lara Howe. Portsea was inundated with people from Melbourne over the weekend 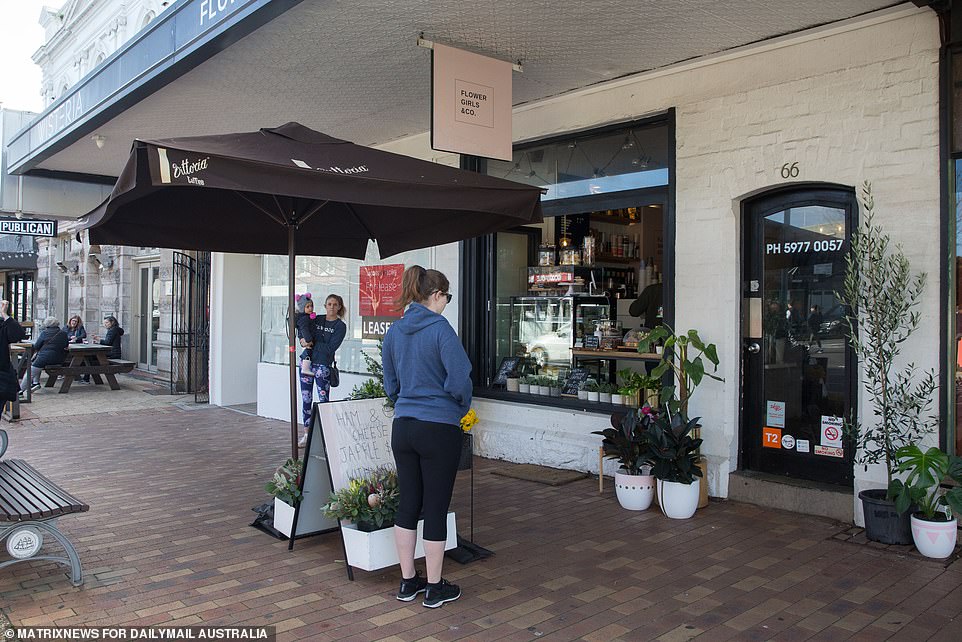 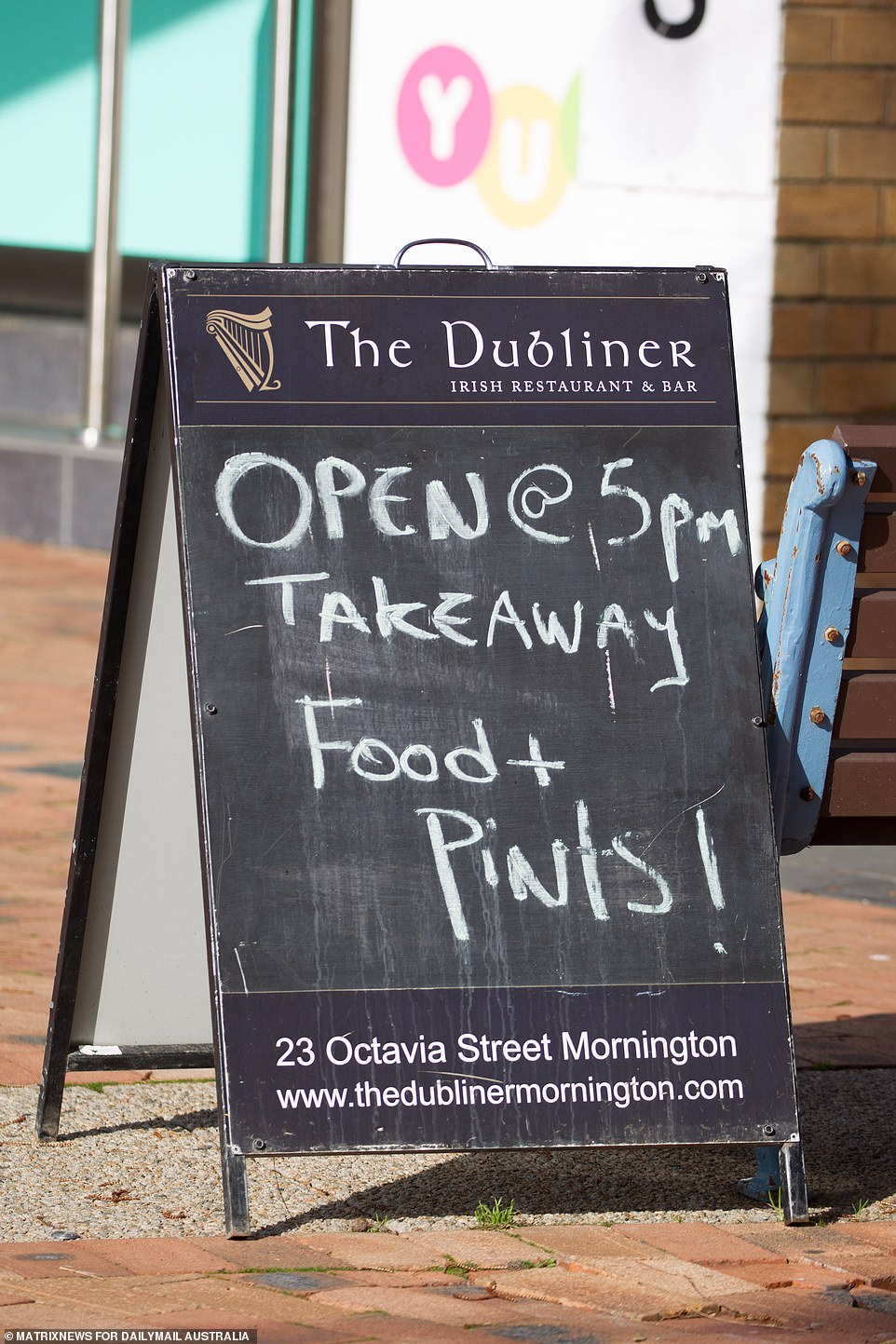 The area enjoys 192kms of coastline with 70 per cent of its land classed as ‘Green Wedge’.

A large sign along the road tells visitors they are no longer in metropolitan Melbourne.

Up until last week, many residents of the peninsula thought that sign to be true.

That was until they were locked down with the rest of Melbourne.

There are now 1,612 active cases of the virus in Victoria and 72 people in hospital suffering from COVID-19 – 17 of whom are in intensive care.

Positioned directly on the opposite side of the Mornington Peninsula, across Port Phillip Bay, the town of Geelong and its coastal regions remain free.

In Geelong, shops remain open and people are free to catch up for a beer and a coffee.

In Portsea, on the tip of the peninsula, locals can sit at the pier and watch the ferry from the free land of Queenscliff motor across the bay.

The practice is usually done from the beer garden at the iconic Portsea Hotel, but beachside beers are out for them for at least the next six weeks.

In Queenscliff, locals can still enjoy a pint and a punt at the local. 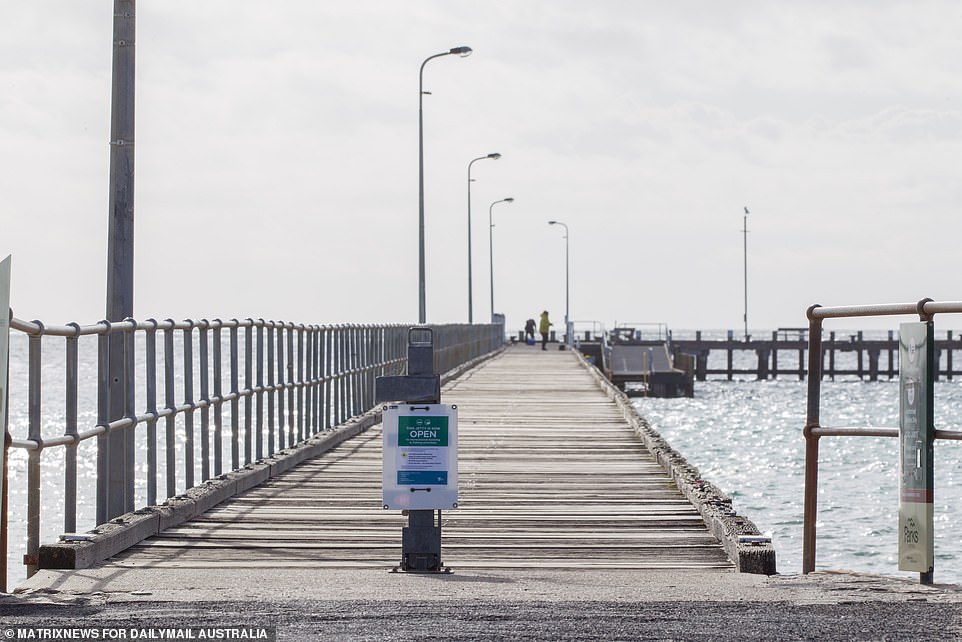 Rye Pier sits almost completely empty on Monday. The area has been placed in strict lockdown with the rest of Melbourne 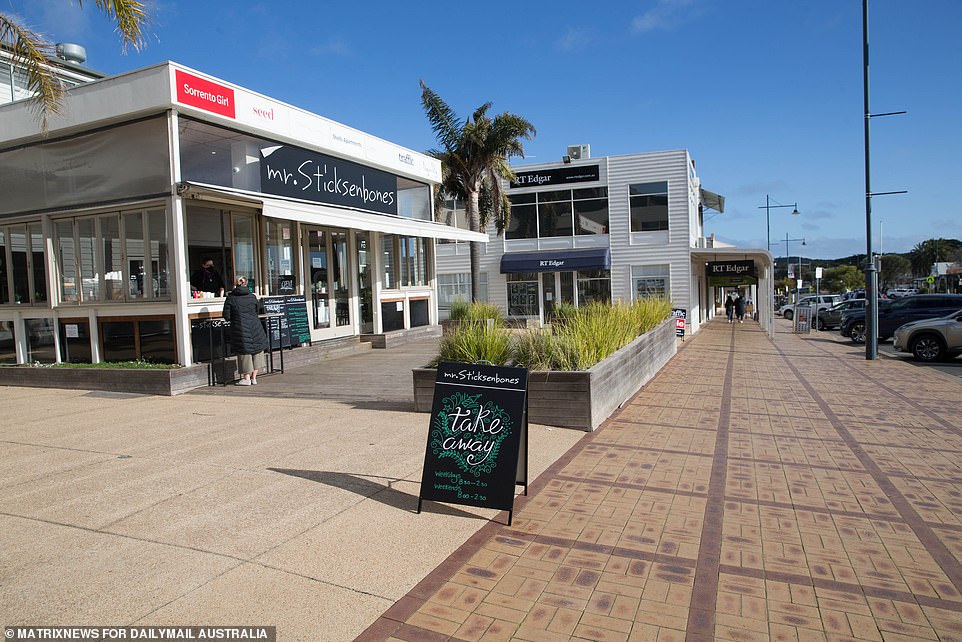 The popular streets of Portsea sit empty. A group of people can be seen socially distancing at the local bakery 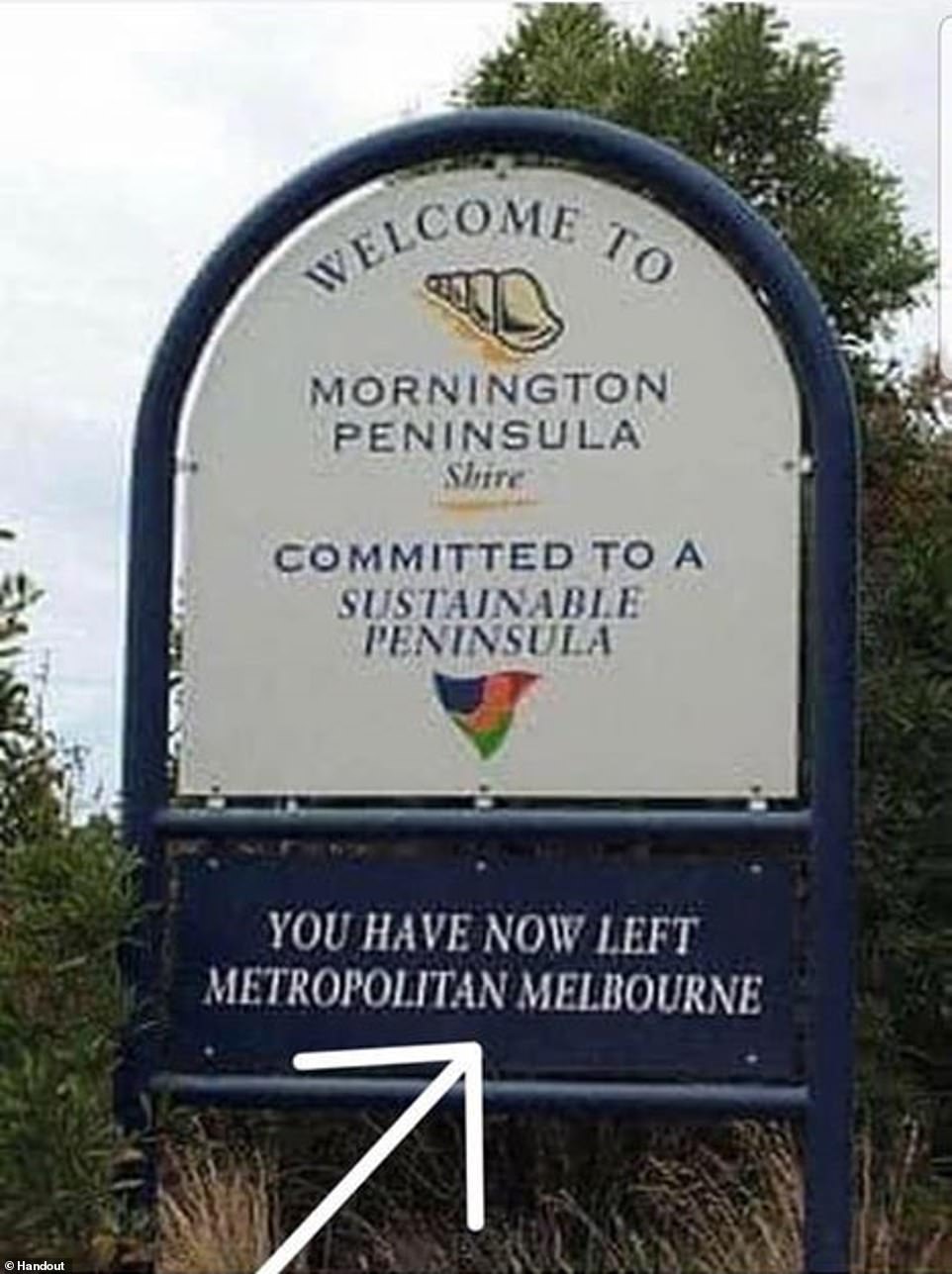 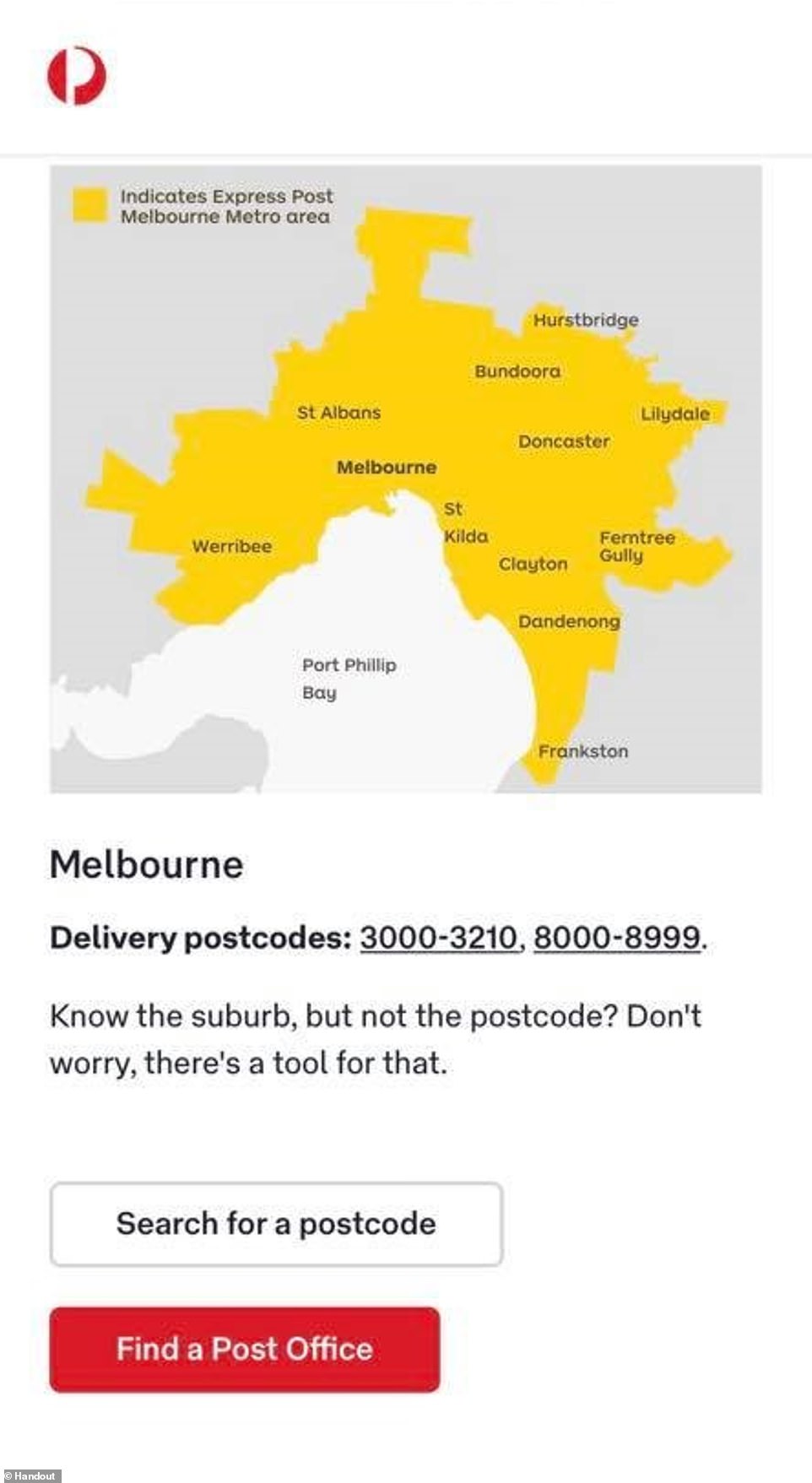 In Geelong, about a 75 km drive southwest from the heart of Melbourne, COVID-19 has infected 73 people, with five active cases.

On the Mornington Peninsula, in the southeast, they have 64 confirmed cases, with no active case.

While Geelong continues to push through the pandemic, Mornington Peninsula remains in limbo.

On Monday, Daily Mail Australia visited townships along the peninsula all the way up to Portsea.

Last week, coastal towns along the Surf Coast, on the ‘free side’ of the bay, were pumping with activity.

Too much activity, the locals in Lorne complained.

Like Portsea, Lorne is loaded with holiday homes, which were inundated when the lockdown was announced by Premier Andrews last week.

When the pandemic first kicked off in Victoria, Portsea locals were furious it had been brought into their community from holiday home owners.

Back then, residents teed off at the ‘Colorado cluster’ and erected signs around the seaside town lashing out at them to have stayed in Aspen, where they caught the virus.

On Monday, Portsea was all but dead. 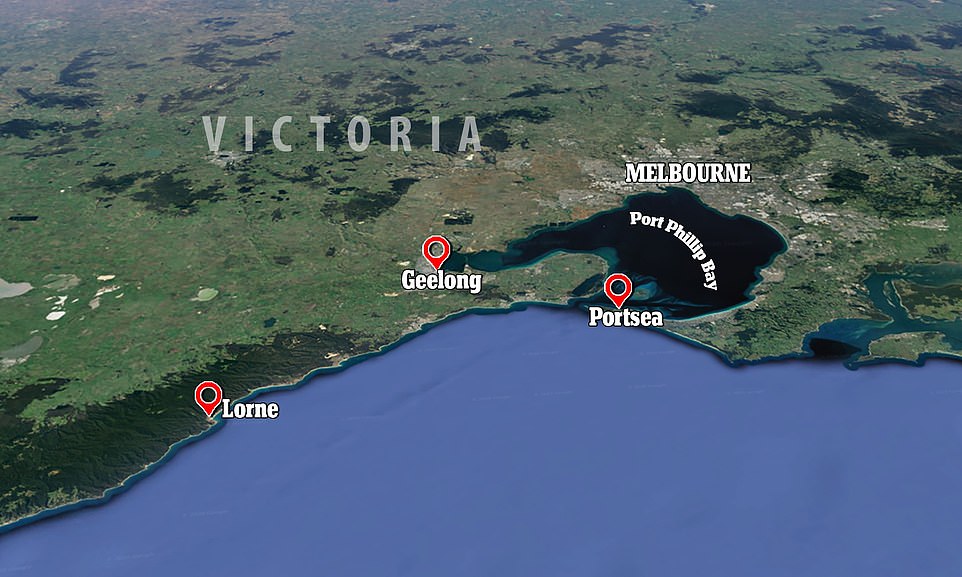 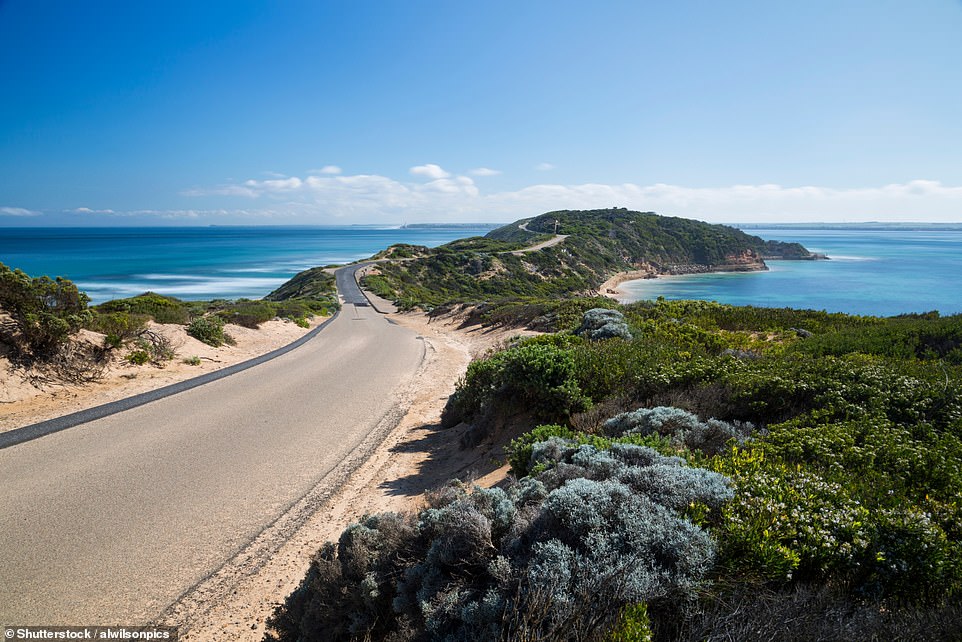 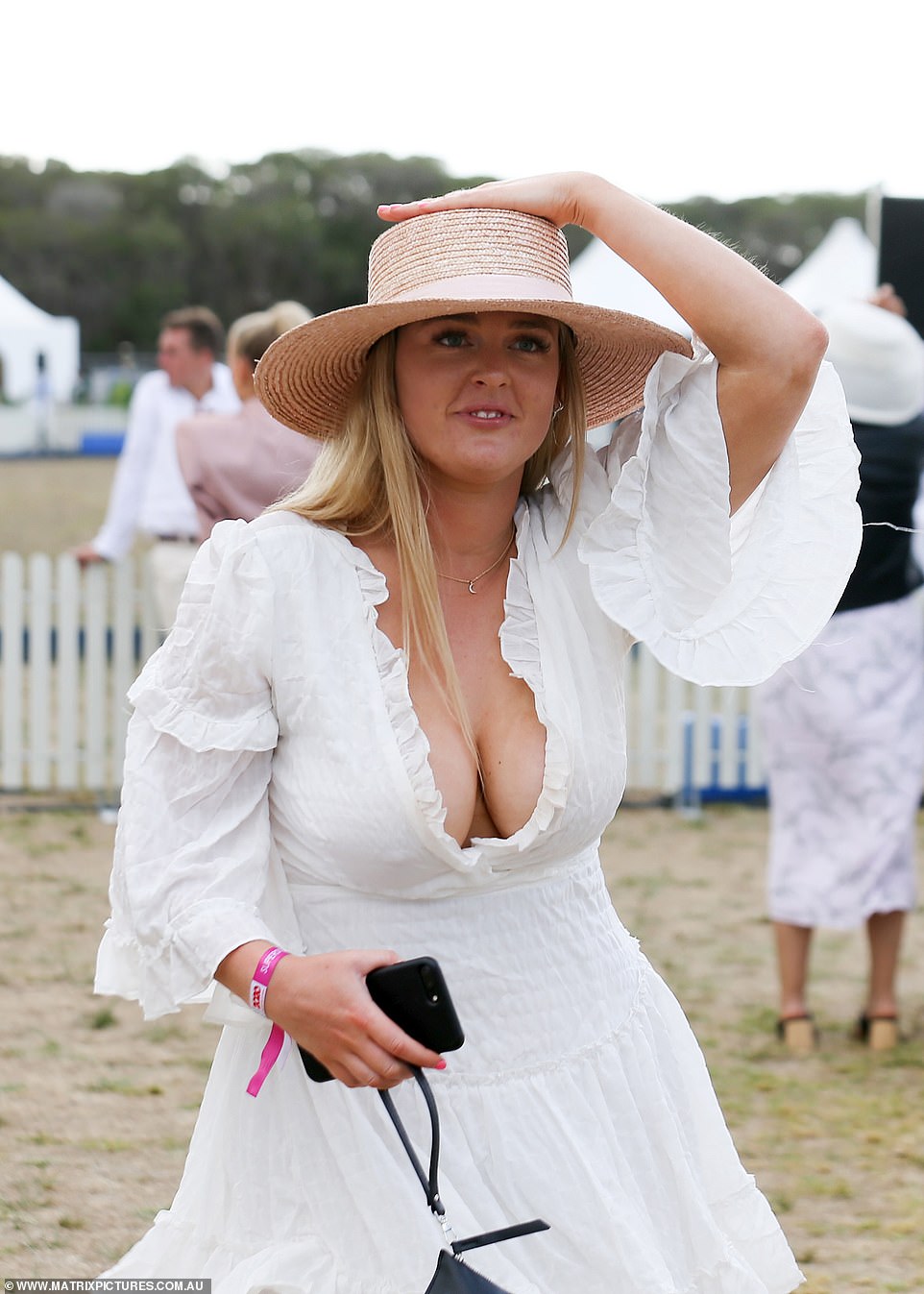 A punter during January’s Portsea Polo event.  Portsea is the playground for Melbourne’s rich and famous, who were accused of spreading the virus in March 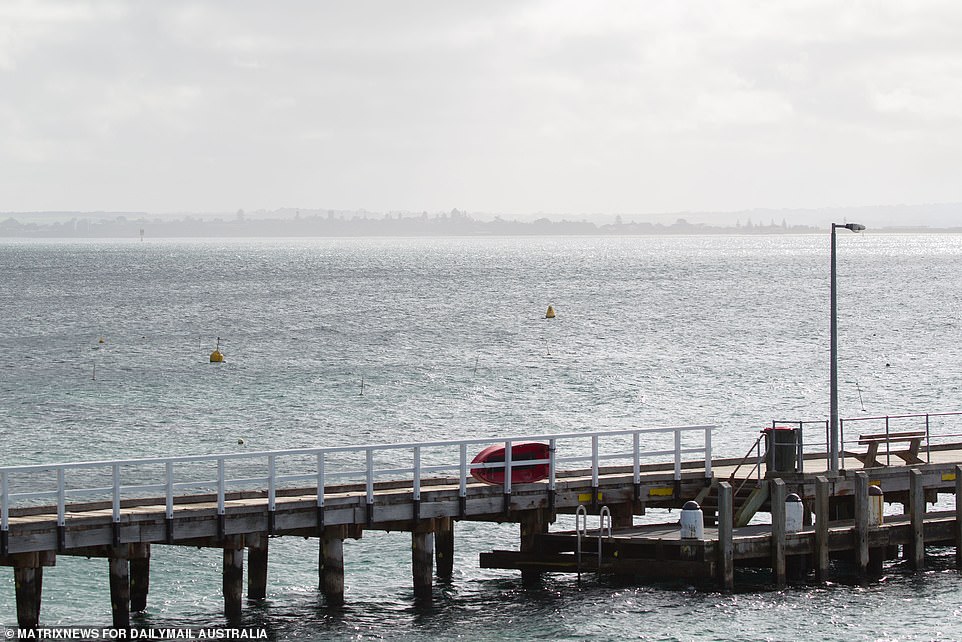 The weekend was a different story, Daily Mail Australia was told.

A woman working at one cafe told Daily Mail Australia she understood why the premier had locked down their town.

‘People who have holiday homes here have come down,’ she said. ‘The virus has been brought in. Some people are always going to do the wrong thing.’

Others are still downright angry.

‘This has been the quietest it’s been for a week,’ another shop owner said. ‘Most of the people in town don’t live here. They’ve come here to escape Melbourne.’

The woman claimed Melburnians had even started renting in Portsea to escape the dreary Melbourne lock down.

Mr Hearn said people from Melbourne would continue to come into the municipality while it was classed as metropolitan Melbourne.

‘That’s the main concern we have. As the laws and restrictions stand, technically someone can drive from Werribee (on the other side of Port Phillip Bay) to Sorrento to play golf or go fishing or whatever,’ he said.

Mr Hearn said the Mornington Peninsula had already been among the worst hit areas of Melbourne due to the initial lockdown.

The area is popular among Australians who visit Melbourne not only for its beaches, but its access to fine dining and wineries. 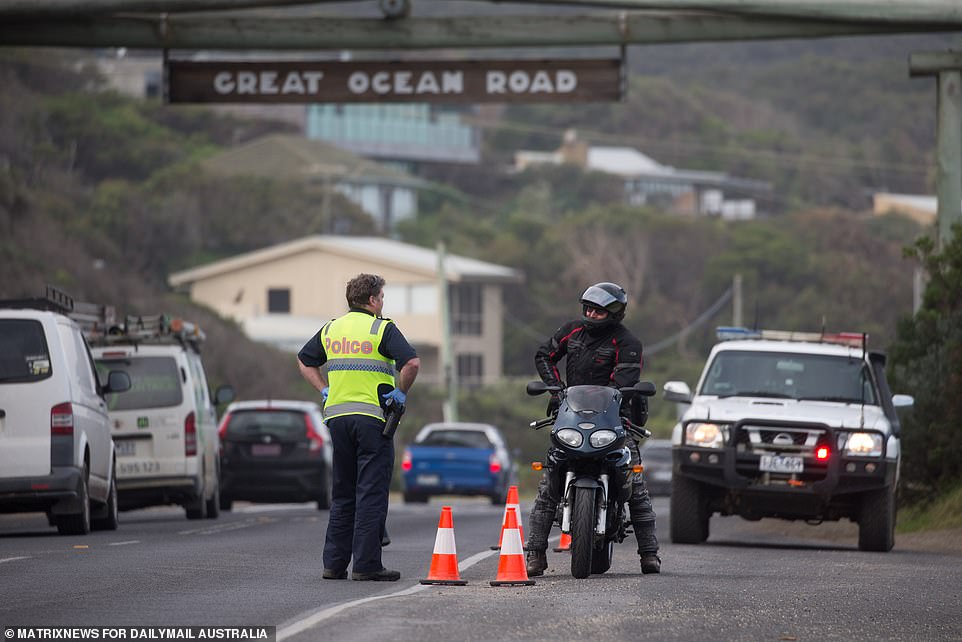 Police have set up roadblocks to try and stop ‘blow-ins’ from visiting Lorne. Portsea residents wish they could keep holiday home makes out too 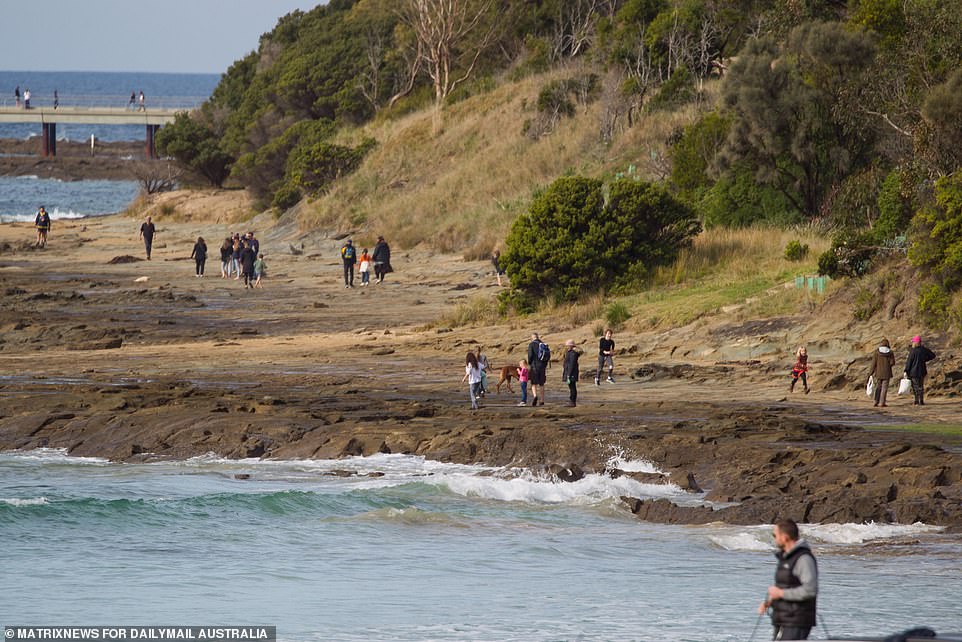 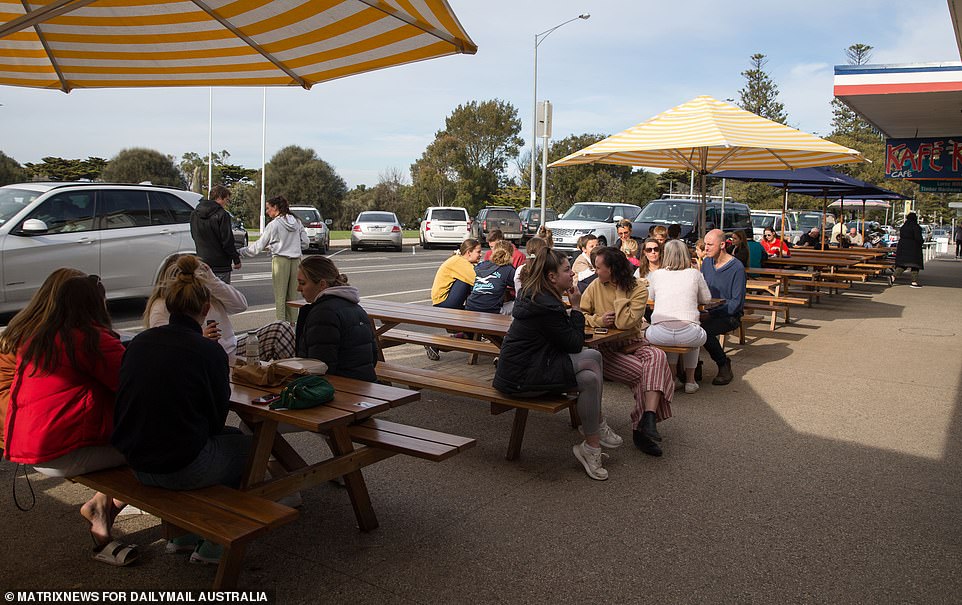 Lorne businesses might yet survive the COVID-19 crisis. Mornington Peninsula businesses are worried they won’t 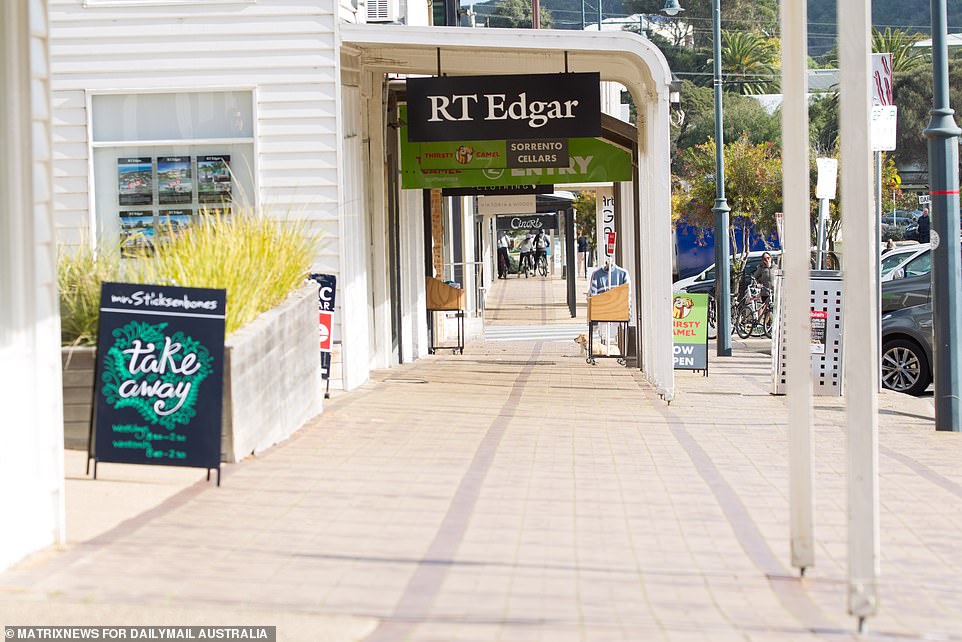 Portsea was empty on Monday, but locals say it has been hectic with Melburnians who have ventured to their holiday homes during lockdown

‘I guess in order of priorities … the first is the health risk and that travel risk and then the second is, straight off the bat, is if we’ve got no active cases down here and we can be a bit protected from the high infection rates of the city, then our businesses are going to be a bit better off if they’re able to be on the same footing as the Surf Coast, Phillip Island and Geelong,’ Mr Hearn said.

The mayor believes many residents already assumed the area was classed as regional.

‘They’re thinking “Oh wait, you’re telling us you classify us as metropolitan and that doesn’t kind of sit with their community perception or identity of the peninsula”,’ he said.

On Monday, towns such as Rosebud and Blairgowrie, along the peninsula appeared to be busy. 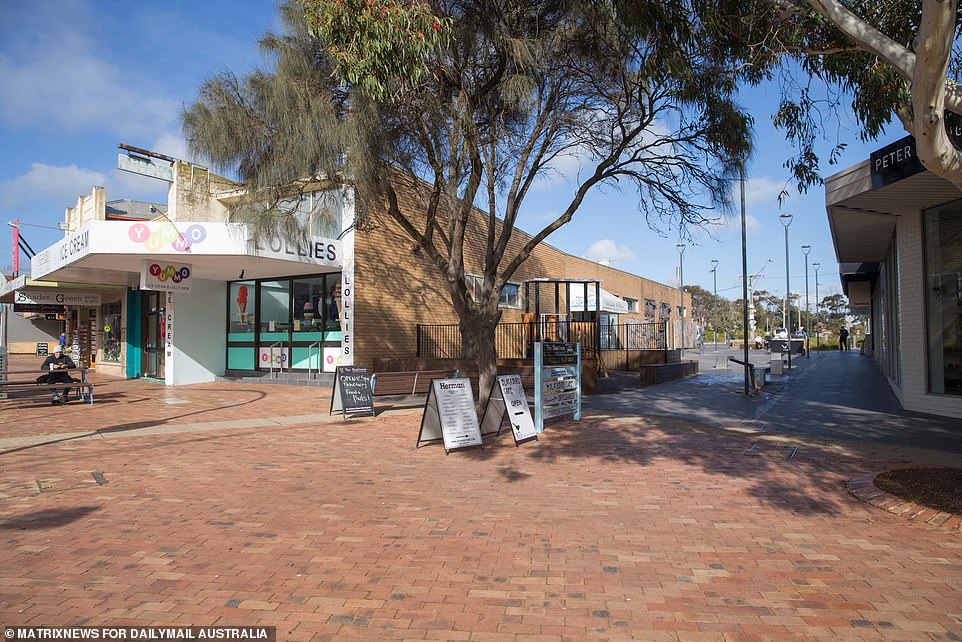 Mornington was quiet on Monday amid COVID lockdown. Business owners are annoyed that they have been included in the metropolitan lockdown while Geelong hasn’t 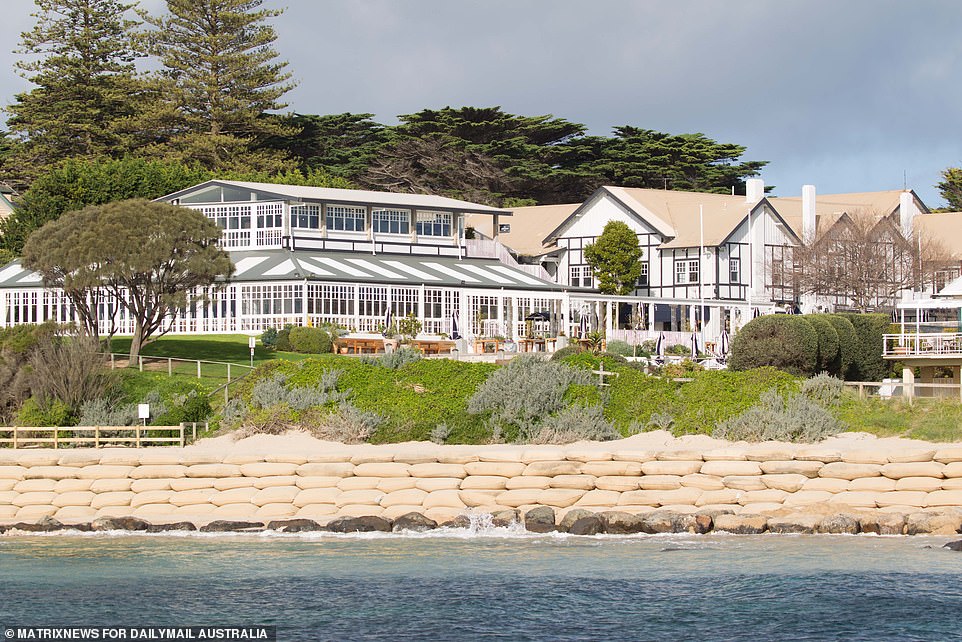 The iconic Portsea Hotel sits empty on Monday. Unlike pubs in Geelong, it cannot open due to strict lockdown

In Blairgowrie, older Australians could be seen congregating together enjoying a coffee with little concern for self distancing.

Rosebud business owner Paul Gough told Daily Mail Australia they should be able to open-up like people in Geelong.

Mr Gough’s tour bus business, Amour Of The Grape, has been forced to close again despite their being no active cases of COVID in the area.

The fact Geelong, which borders the COVID hotspot of Wyndham with 196 active cases, is not locked down is rubbing further salt in their wounds. 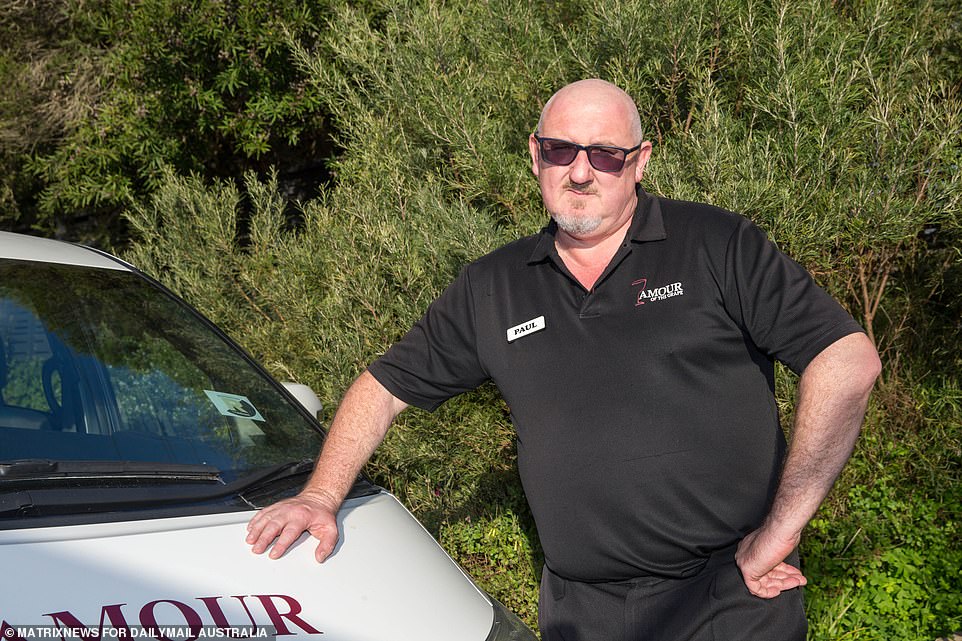 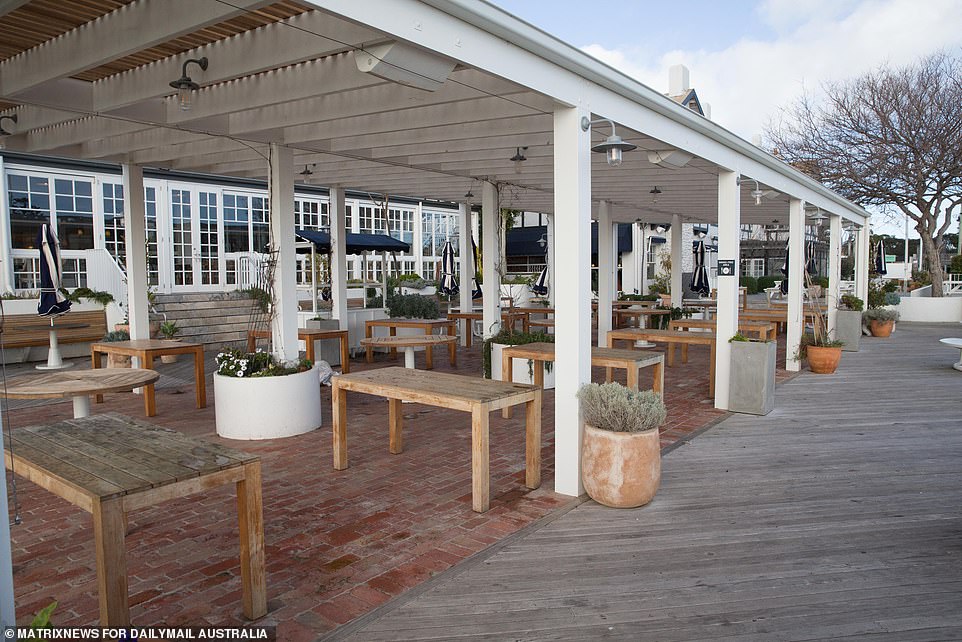 A pub with no beer: The Portsea Hotel on Monday

`We can’t get any money for funding – they don’t consider us part of Melbourne when it comes to infrastructure spending … we don’t have access to the transport options that the other parts that are in lockdown have,’ Mr Gough said.

‘We can’t even get money for the Jetty Road Mornington Peninsula Freeway overpass to stop all that traffic banking up, yet Geelong gets millions of dollars for their stadium.’

Mr Gough said while businesses would still struggle with no Melburnians in town, they would still be able to trade.

‘At least if the peninsula was open we would be able to take some people out. The locals could go out and the wineries would be open,’ he said. ‘It might not be much business, but at least it would be some.’ 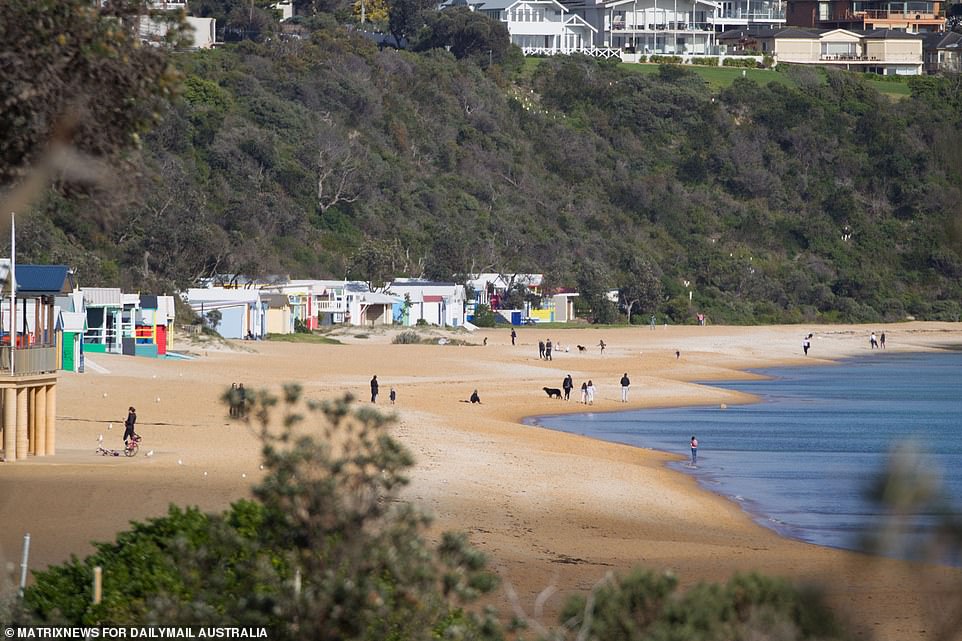 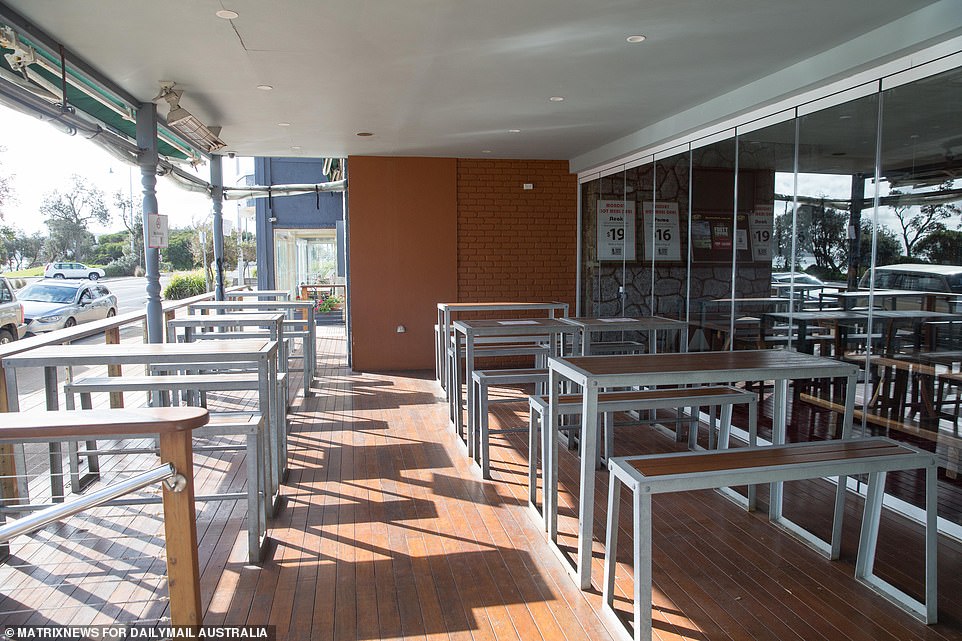 Dromana, along the peninsula, was deserted on Monday amid COVID lockdown 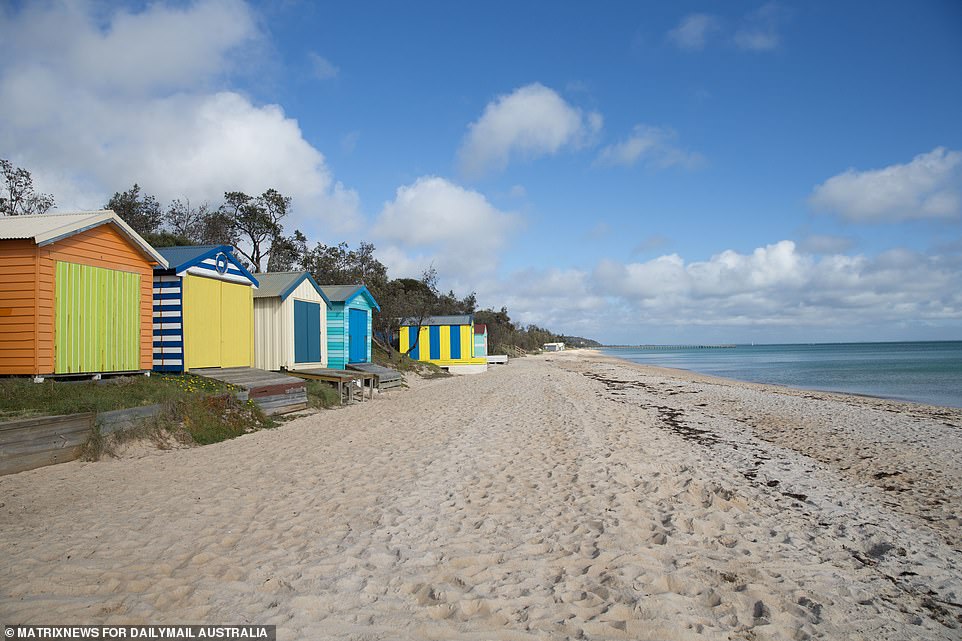 An empty Dromana beach on Monday. It has been included in the strict lockdown despite having no active cases