The owner of an antiques market which trades in golliwogs and Nazi memorabilia has taken on outraged visitors who say such historical relics should not be offered for sale.

A sign has been placed outside Morpeth Antique Centre in the New South Wales Hunter Valley describing the dealership as a ‘purveyor of history’ and warning customers about some of the controversial items they might confront inside.

‘Entry is free,’ the sign states. ‘At your discretion.’

The owner of an antiques market which trades in golliwogs and Nazi memorabilia has taken on outraged visitors who believe such historical relics should not be offered for sale. Trevor Richards is pictured left at his Morpeth Antique Centre in the New South Wales Hunter Valley 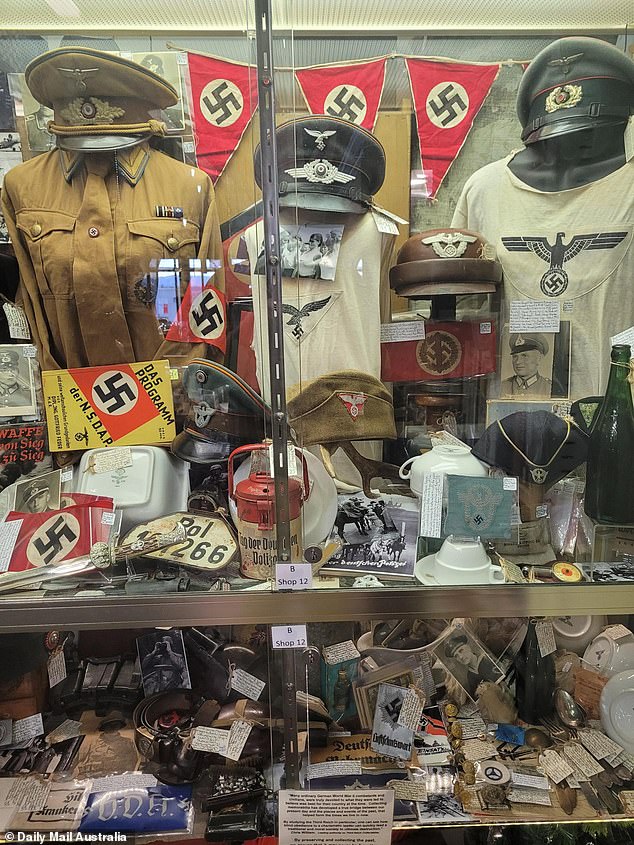 The antique centre, which operates from the 180-year-old Campbell’s Store on Morpeth’s main street, is one of the two-pub town’s biggest weekend tourist attractions.

In recent years it has also become a target of ‘politically correct’ antagonists who object to some of the wares on offer, particularly Nazi war relics emblazoned with swastikas.

The sign, which went up about three weeks ago, is the work of centre owner Trevor Richards and his daughter Kylie, who refined the wording over several months of considering how to get their message across.

The pair was sick of having to deal with outraged visitors, some of whom were abusive to their staff.

‘We put it up just to try and minimise people being offended by some of the products we sell,’ Mr Richards said.

‘And explain to them what the expectation is when they enter Campbell’s Store. 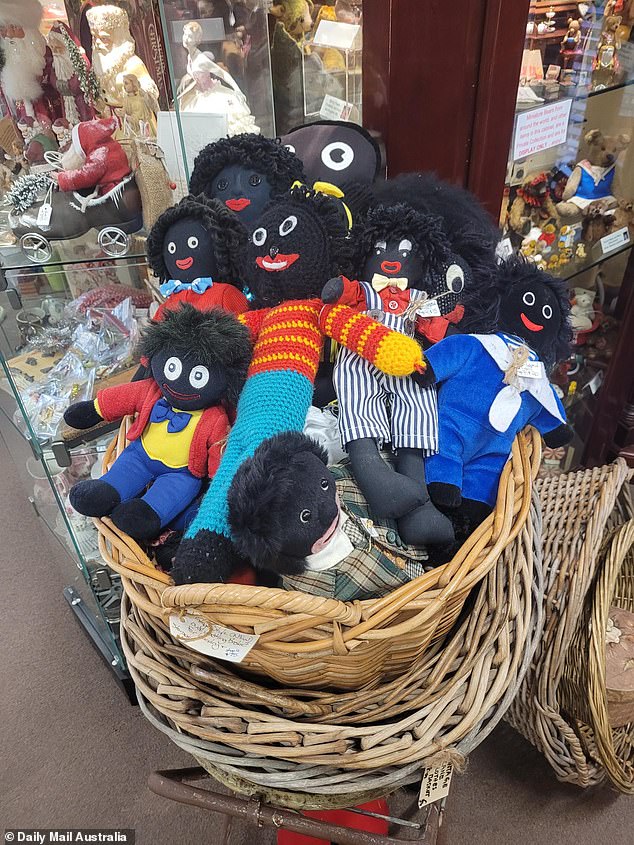 The centre also sells taxidermy, fur, whale bone, ivory, religious icons, ‘colonial and empire jewellery’ and indigenous artefacts from around the world. Pictured is a basket full of golliwogs on the centre’s first floor 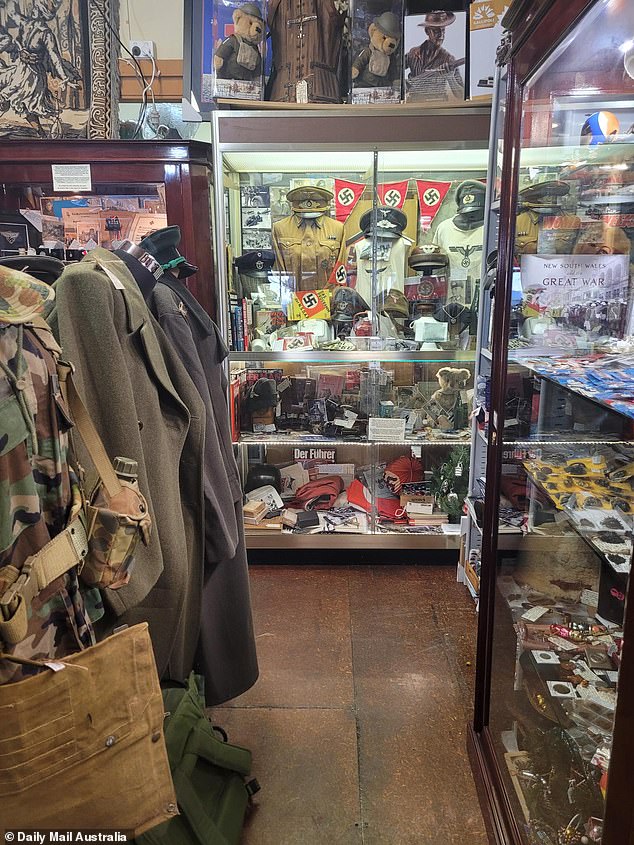 In recent years Morpeth Antique Centre has also become a target of ‘politically correct’ antagonists who object to some of the wares on offer, particularly Nazi war relics emblazoned with swastikas. Stallholder Matt Robinson says the memorabilia does not glorify Nazism

‘As the sign indicates at the top, we are purveyors of history and history includes things like gollies, which were very fashionable in the 1900s.’

Golliwogs – black dolls with frizzy hair and minstrel faces that first appeared in children’s books in the late 19th century – were popular toys in Australia into the 1970s. There is a large display of them on the centre’s first floor.

The most contentious material for sale is World War II memorabilia from Nazi Germany’s Third Reich. The centre has Jewish relics from the Holocaust era as well.

‘It’s history,’ Mr Robinson said. ‘I don’t sell it to glorify it. 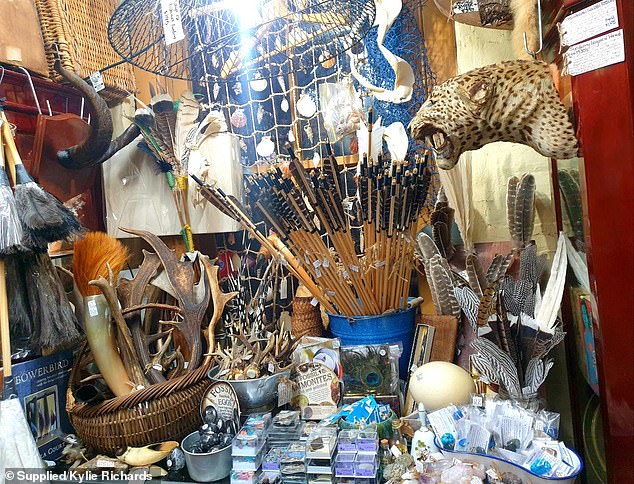 There was seemingly no end to the items that cause complaints at Morpeth Antique Centre. ‘There’s some about indigenous artefacts…’ says Kylie Richards. ‘And we get the odd one about antiquities – “you shouldn’t have Roman coins” and so on’ 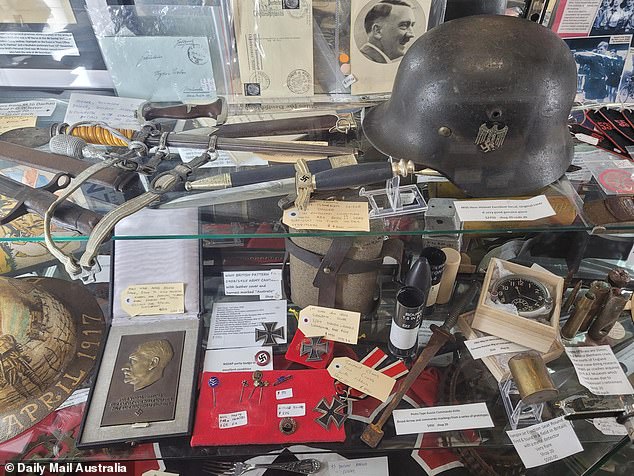 The most contentious material for sale is World War II memorabilia from Nazi Germany’s Third Reich. The centre has Jewish relics from the Holocaust era as well. Pictured are items including a German helmet, Iron Cross medals, daggers and a photograph of Adolf Hitler

‘I also sell Japanese World War II items which are extremely popular as well. As Australians, technically we probably should be more offended by that than anything with a swastika on it.’

Ms Richards said it was a only tiny minority of visitors who took issue with what was on sale at the centre but she and her father wanted to diffuse any trouble.

‘Usually you can have a good conversation with a customer about whatever it is that’s caused them offence but sometimes they really do get quite defensive about it all,’ she said.

‘The team managing the counter downstairs don’t need to put up with people walking in the door and abusing them about this, that and the other.

‘Finally it got to the point where we just got one too many comment.’

Ms Richards said the sign was meant to advise anyone who came into the centre ‘that it’s chock-a-block with thousands of years of history and that some people might be offended by what they see.’

‘Our position in a very polite way is to say well, it’s a part of history and we shouldn’t be writing history out of books and society,’ she said. 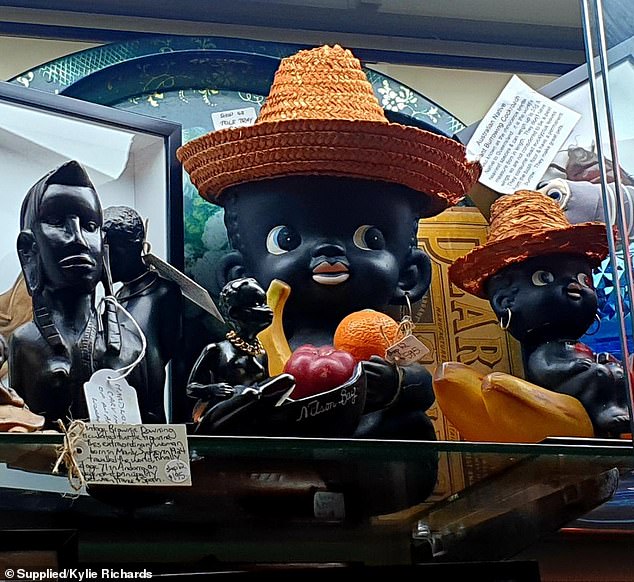 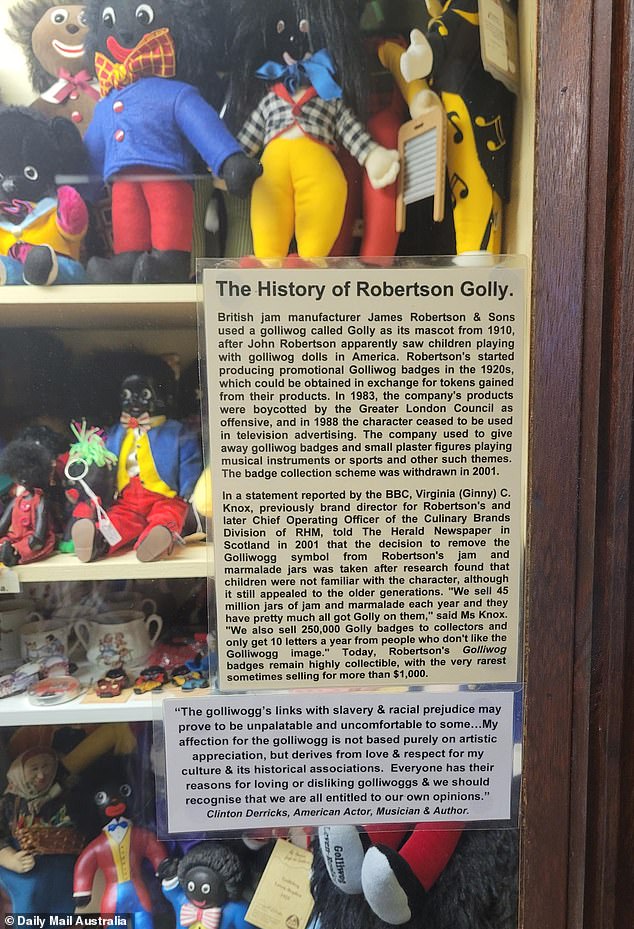 Golliwogs were used to market Robertson’s jam in the early 20th century, which is explained in a note on the window of a cabinet full of the black dolls. A further note recognises golliwogs ‘may prove to be unpalatable to some’

‘We’re not confrontational. We don’t want to be that. We just want people to come in and enjoy themselves without it necessarily becoming a woke issue.

‘But it’s their choice. It’s a private business, we’re not forcing you to come in the front door.’

Ms Richards said the first complaints staff received when the centre opened five years ago were about the large number of golliwogs in a cabinet filled with black Americana.

She dealt with those protests by displaying a pamphlet which explained the origins of golliwogs and how it spread as a marketing icon for Robertson’s jam in the early 20th century.

When Ms Richards was told that brochure presented a ‘rose-coloured’ view of the dolls she wrote a second one which recognised their racist connotations in modern times.

‘That got handed to every person who made a comment and it was just there as a general information sheet for customers as well,’ Ms Richards said. 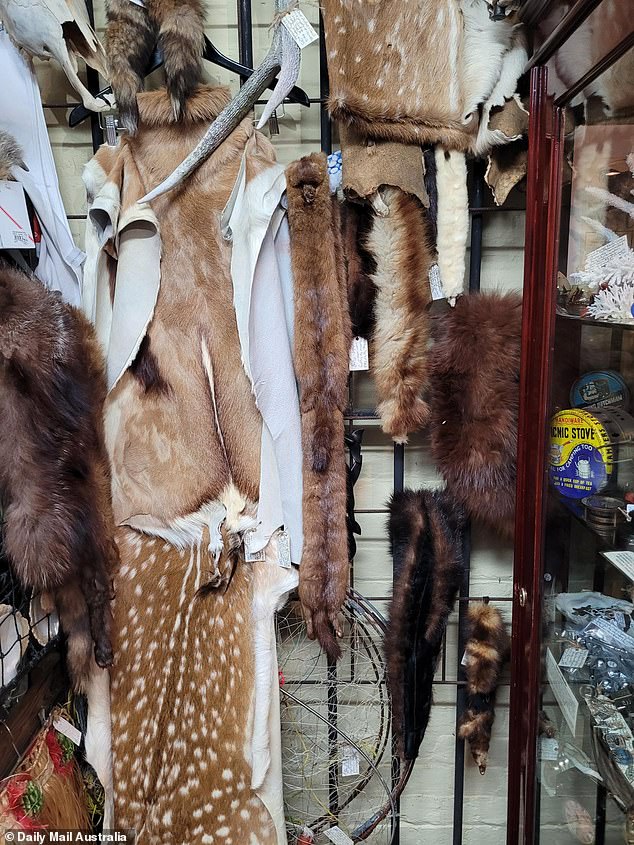 Kylie Richards from Morpeth Antique Centre says a tiny minority of visitors complain about some of the items being sold. ‘We’ve had people have a go about Barbie dolls, taxidermy, fur, blood diamonds, whale bone, colonial and empire jewellery, anything Edwardian’

‘But of course we get a fair few comments about other things, which is basically all the things that are written on the sign out the front.’

There was seemingly no end to the items that could cause offence including uranium glass which contains the radioactive metal. When put under an ultra-violet light it glows.

‘There’s some about indigenous artefacts as well, and we get the odd one about antiquities too – “you shouldn’t have Roman coins” and things like that. We get a little bit of that as well.

‘Semi-precious stones that have been mined out of Sri Lanka and Burma – that type of thing. And Noddy.’

The fictional character Noddy was created by English children’s author Enid Blyton for a series of books published between 1949 and 1963. 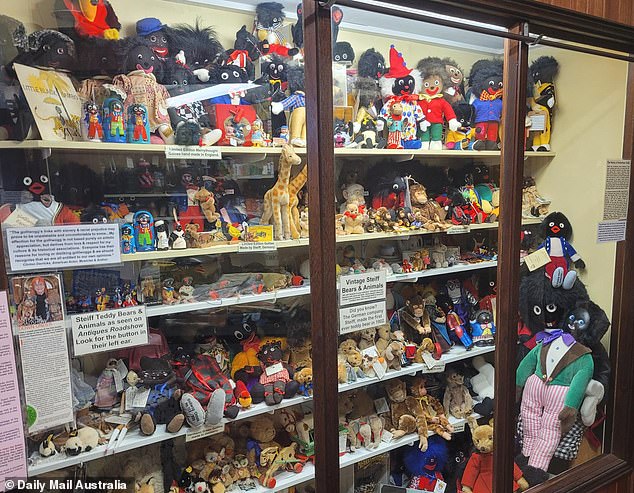 Golliwogs – black rag dolls that first appeared in children’s books in the late 19th century – were popular toys in Australia into the 1970s. Pictured is a cabinet full of golliwogs

The original publications featured golliwogs, often cast as villains, and in recent decades Blyton has been accused of being racist, sexist and xenophobic.

Barbie, the collectable fashion doll launched by Mattel in 1959, is blamed for perpetuating gender stereotypes and conveying an unrealistic body image to girls.

‘Even Smurfs – we get the odd comment about Smurfs too,’ Ms Richards said. ‘But it’s mainly Noddy and Barbie.’

Asked how Smurfs could offend anyone, Ms Richards said: ‘I don’t know about that one’.

The centre’s loudest critic has been Dr Dvir Abramovich, chairman of the Anti-Defamation Commission, who lives in Victoria and has never visited the store.

Dr Abramovich has been spearheading a national campaign to ban the sale of Third Reich paraphernalia and believes the trade encourages neo-Nazism.

Ms Richards counters that there has been a strong market for Nazi memorabilia for decades and much of it is so expensive that prices would be prohibitive to the average white supremacist.

Ironically, efforts to ban the sale of such items only makes them more scarce and therefore more valuable.

‘One of our main buyers are museums and we’ve sold and donated items to Jewish museums right through Australia and one overseas,’ she said. ‘They’re using the items for historical context.

‘The people who walk in the front door are predominantly professionals. They’re lawyers, they’re doctors, the come from all walks of life but they’re rational, sensible people.’

Ms Richards said no one had mentioned the sign since it went up but she believed the message had been absorbed.

‘We haven’t had any negativity come through the door since then,’ she said.

‘We haven’t actually had any comment one way or the other but it has taken a bit of pressure off the team at the front counter in particular.’ 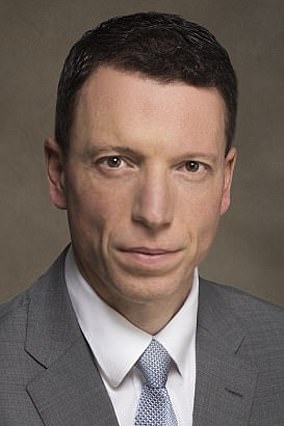 Victoria became the first Australian jurisdiction to criminalise the display of the Nazi swastika in June and other states are being pressured to follow.

Dr Dvir Abramovich is chairman of the Anti-Defamation Commission and the most vocal critic of Morpeth Antique Centre but has not visited the store.

He has been spearheading a national campaign to ban the sale of Nazi memorabilia and describes profiting from the trade as shameful.

‘Turning a profit from the devil’s tools that symbolise a regime responsible for the extermination of six million Jews and millions of others is beyond depraved,’ he told Daily Mail Australia.

‘Anyone offering these cursed, blood-soaked items is desecrating the memory of the victims and should be ashamed.’

Dr Abramovich said white supremacists would revel in buying and displaying in their homes such Third Reich paraphernalia.

He was also incensed about the continued sale of golliwogs in Australia. 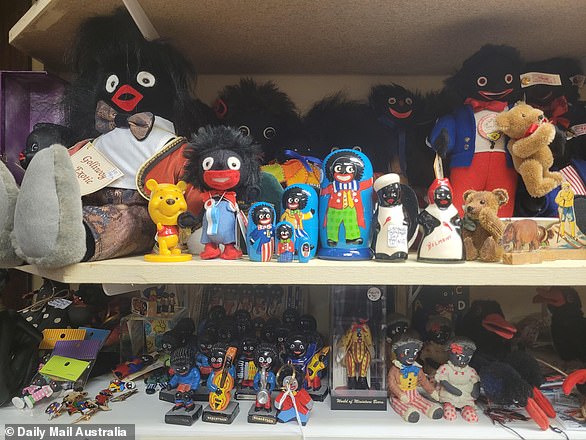 ‘It’s hard to believe that there is a still market for these dolls and that there are still businesses trafficking in these items,’ he said.

‘There is nothing fun, cute or funny about golliwogs which are commercial symbols of racism that are degrading, humiliating, and hurtful to so many people.

‘We can’t ignore the troubling tradition of these insulting dolls and that they perpetuate a destructive and derogatory stereotype.’

Dr Abramovich said seeing golliwogs on sale would be confronting and painful to Indigenous Australians.

‘It is beyond insensitive and wrong for any company to make a profit from the sale of these hateful objects,’ he said.

‘Their availability will only compound demeaning caricatures and attitudes that should be consigned to the dustbin of history.’ 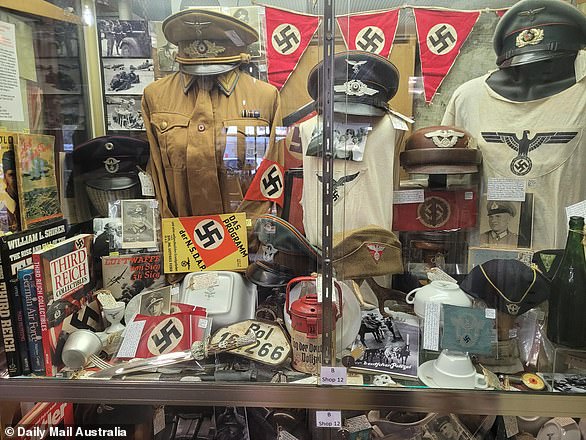