A mortgage lender says he is ‘beyond sorry’ for making a series of ‘inappropriate, lewd and hurtful comments’ about the wife of a business rival.

Anthony Casa, who serves as a chairman at AIME mortgage lenders in Philadelphia, took to Facebook Monday to apologize for slurs he made about Teresa Niemiec.

Niemiec is the wife of Austin Niemiec, the Executive Vice President of Detroit-based Quicken Loans and one of Casa’s  competitors.

The Niemiecs filed a defamation lawsuit this month against Casa, accusing him of ‘crowd shaming’ her by making the lewd and untruthful comments and sending them to other reverse mortgage lenders.

A copy of the lawsuit alleges that ‘on July 2, while at a social gathering with many people in the vicinity, Casa filmed and then widely distributed and published  defamatory video clips and drafted and sent defamatory text messages directed to Mr Niemiec wherein Casa disparaged and demeaned Ms Niemiec.’

According to The Detroit Free Press, ‘Casa falsely accused Ms Niemiec of being promiscuous in college with United Wholesale Mortgage CEO Mat Ishbia’.

One text sent from Casa to Mr Niemiec read: ‘Austin, great to see you’re having a great time. Love to meet your wife. It’s amazing that’s the girl who sucked Ishbia’s d*** in college. Way to marry up,’

However, Ms Niemiec did not attend college with Ishbia, and does not know him. 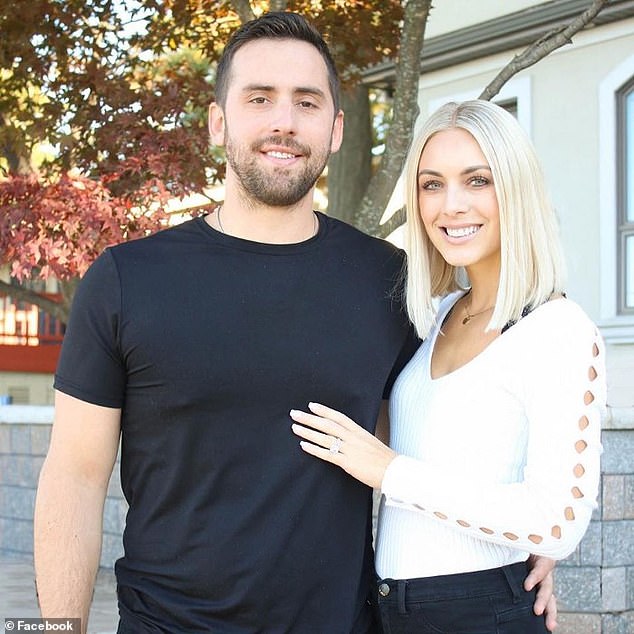 Austin and Teresa Niemiec are pictured. The pair have filed a lawsuit against Anthony Casa, calling for him to ap

Casa later sent more demeaning messages to Mr Niemiec about his wife in a group thread that included business rivals Kevin Peranio, who is the chief lending officer at PRMG, and Ramon Walker, the owner of Mount Diablo Lending.

‘I’ll do that no lip kisses, that is Ishbia’s d*** on her breath,’ one of Casa’s texts purportedly read.

‘You never trusted her anyway; right?’ another text sent to Mr Niemiec stated.

A text sent on July 7 read: ”How’s Teresa. Give her my best.’ Casa then added sexually suggestive emojis, including an eggplant.

In his apology video, released on Monday, Casa claimed his passion was to blame for the derogatory comments.

‘I’m a passionate person, extremely committed and competitive when it comes to the broker movement… I’m from New Jersey, I’m vocal, I’m gritty,’ he stated.

However, he added: ‘I’m going to be embarrassed about this for the rest of my life. As the father of two daughters, I have to live with this, This is just not who I am … I am sorry that these words came out of my mouth … I need to make sure that moving forward this never happens again … I’m going to own this.’