A girlfriend was mortified after ending up in A&E when a raunchy FaceTime call with her long distance boyfriend left her with a sex toy lost internally.

The woman, who uses the pseudonym of Rosiee Sunshine on social media, from Central London, had a multipack of toys that her boyfriend at the time had bought her to spice up their sex life, and decided to try the largest one out.

The 20-year-old says she felt a ‘pop’ and quickly realised the silicone toy, measuring 10.3cm long from tip to base and 4.4cm wide, had slipped fully inside her rectum.

After spending an hour trying to get it out herself with no success, she was forced to wake her housemate at 3am to drive her to A&E, where a ‘hilarious’ x-ray showed the object lodged internally.

Rosiee, from Central London, said: ‘It was your classic long distance story – I was on FaceTime to my boyfriend at the time and we were having a lovely little sexy chat and thought I would be a bit adventurous.

‘So I tried for the first time this absolutely huge butt plug, it was the biggest one I’d tried, but then I felt a pop.

‘I thought it must have fallen out so I reached down to put it back in but it wasn’t there, so I thought “Where is it then?”.

‘There was this frantic moment where I was looking around thinking ‘did it fall off the bed, where could it be?’ and then it dawned on me that it hadn’t fallen out, it had fallen in. 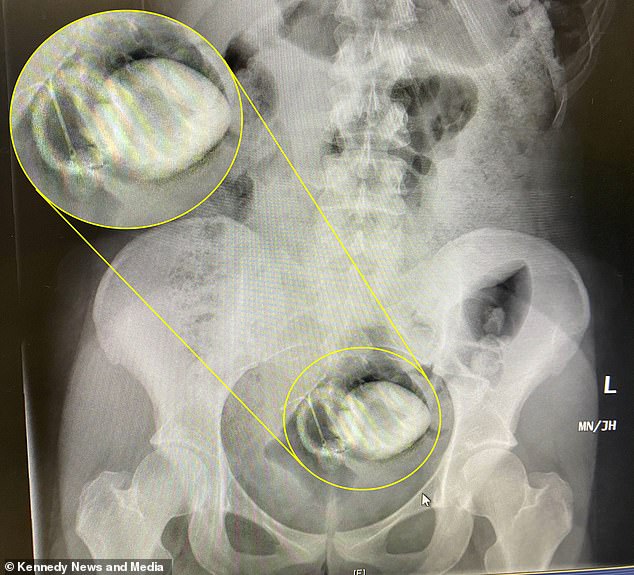 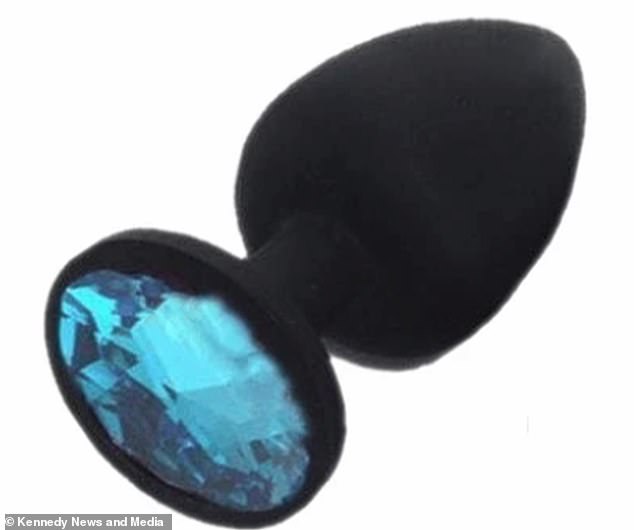 Love Plugs, where Rosiee claims the items were purchased from, were contacted for comment. The toy comes with a crystal embellished based to keep it in place, pictured

‘There was no pain at all, it just floated off and was doing its own thing.

‘So I’m there reaching, trying to get it out and my ex was on FaceTime so he was no help, he was just watching me cry. I was horrified.

‘I looked at him and was like, “Oh my god, I’m going to have to get kitchen tongs” and he said, “No you can’t use kitchen tongs to get it out, that’s not a sensible idea”. 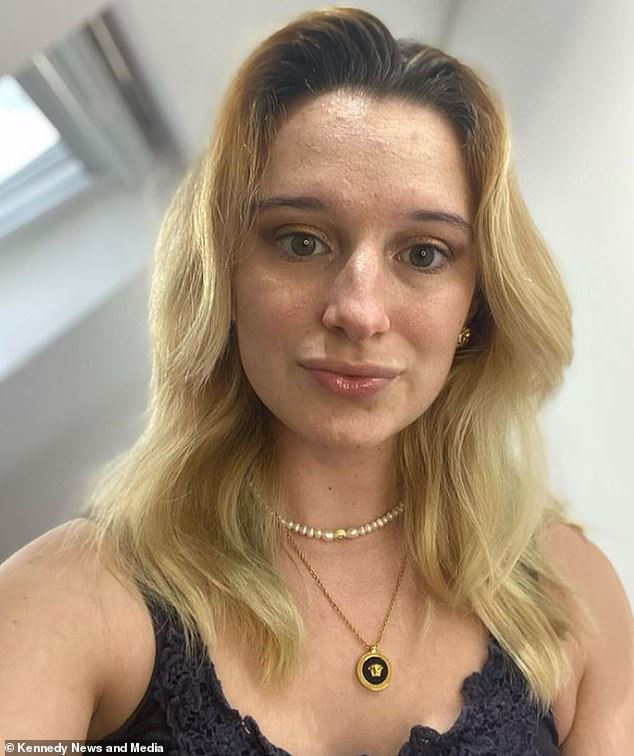 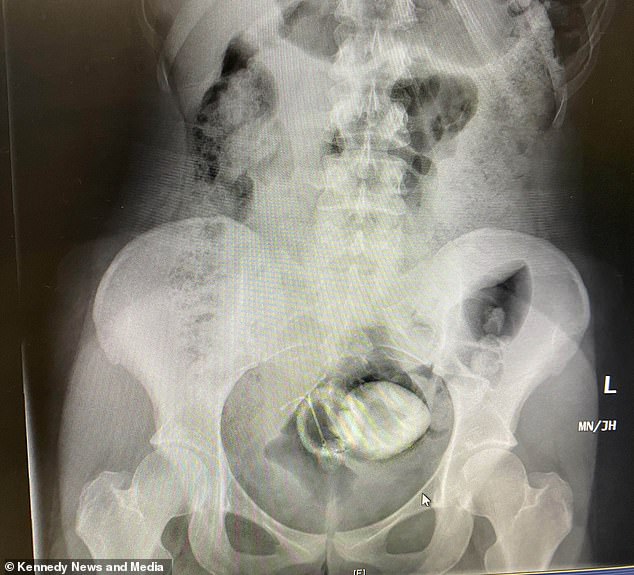 The toy, pictured, was removed manually by a NHS staff, and Rosiee avoided an operation, pictured

‘I was so determined to get it out myself but it just wasn’t happening. I must have spent at least an hour trying to get it out because I did not want to go to A&E.’

The content creator’s ‘horrifying’ ordeal happened in February, but she kept it to herself until posting about it online a week ago after seeing a news article about how the NHS spend £350,000 a year removing objects from people’s bums.

The toy came from a set of three butt plugs ranging from a small one, measuring 7.2cm long and 2.8cm wide, to the largest one that Rosiee used, which was 9.2cm long, plus a 1.1cm base, and 4.4cm wide.

The 20-year-old, pictured, was looking to have some fun with her boyfriend, but the evening did not end with a happy ending 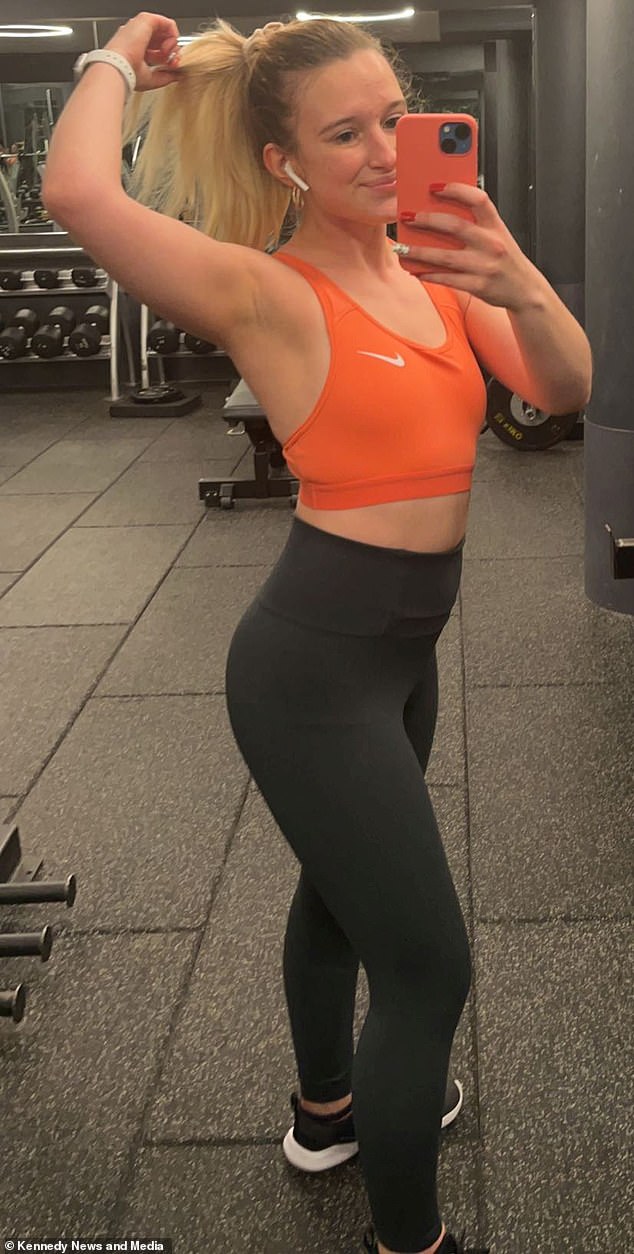 Rosiee at the gym. The 20-year-old soent 5 hours in A&E before the toy could be removed. If left in the body, it could have damaged her organs

The retailer’s website states: ‘The base is round and flat to make sure the plug stays in place.’

But this unfortunately wasn’t the case for Rosiee.

After realising what had happened and failing to remove the toy herself, she rang 111 and was told to go to A&E, because if not removed the butt plug risked damaging her internal organs.

She then spent almost five hours in the hospital, where a doctor managed to ‘fish’ the toy out of her anus with her hand. 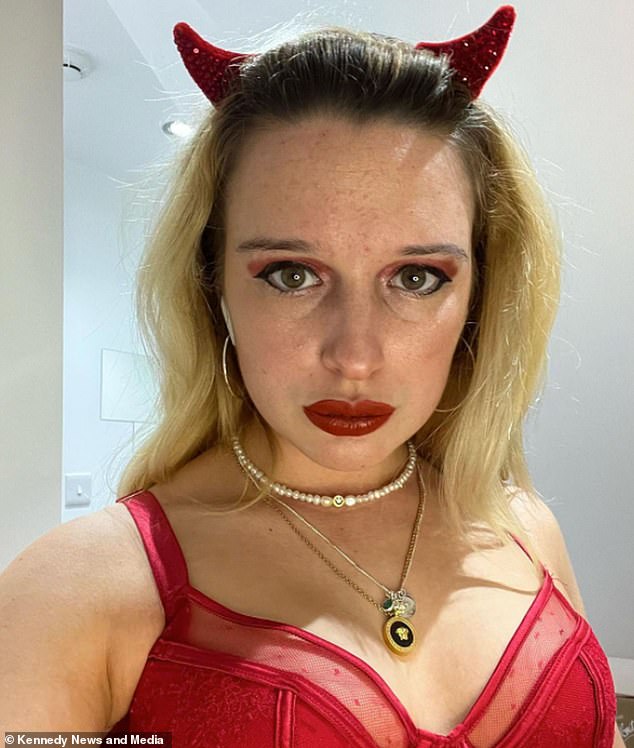 Devil is in the detail! Rosiee, pictured, said she sent a picture of her X-ray showing the toy to her friends 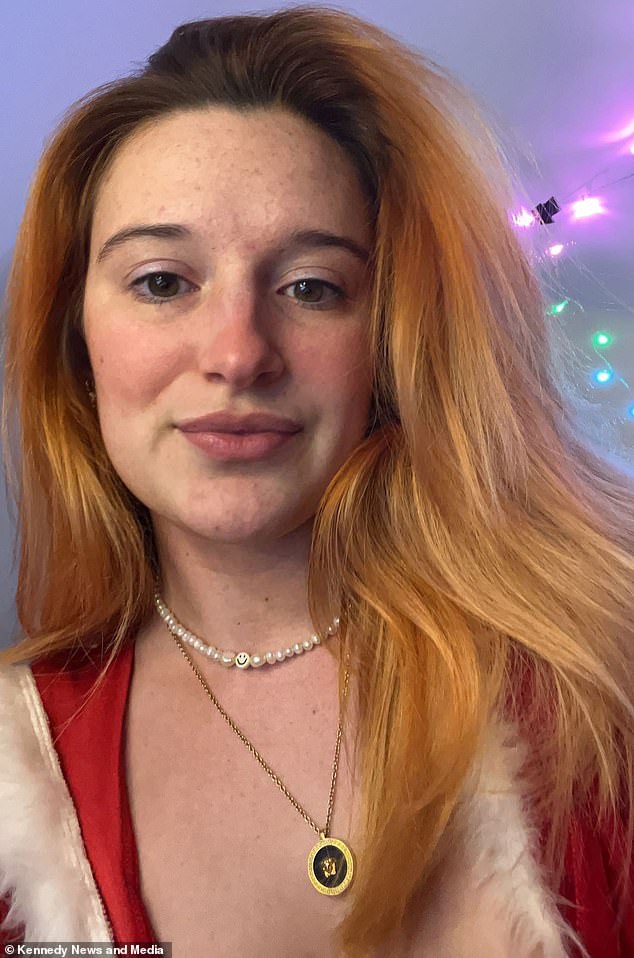 Mortified Rosiee, pictured, had to remind NHS staff in the A&E she was ‘the girl that’s got something stuck up her’

Rosiee said: ‘I got dropped off at A&E and they were all really lovely. I think 111 had called ahead and let them know I was coming in, so they kept it all nice and hush hush.

‘I still had to briefly say “I’m the girl that’s got something stuck up her”, which was a bit awkward.

‘I had an x-ray to check it hadn’t travelled any further. Seeing it on there was hilarious – I sent the photo to my mates and said, “Guess what I’ve done”.

‘Then the poor, lovely female doctor had to just put on some gloves and lots of lube and go fishing – she was probably fishing for a good ten or 20 minutes.

‘It was obviously slightly uncomfortable having her fist deep up my bum. 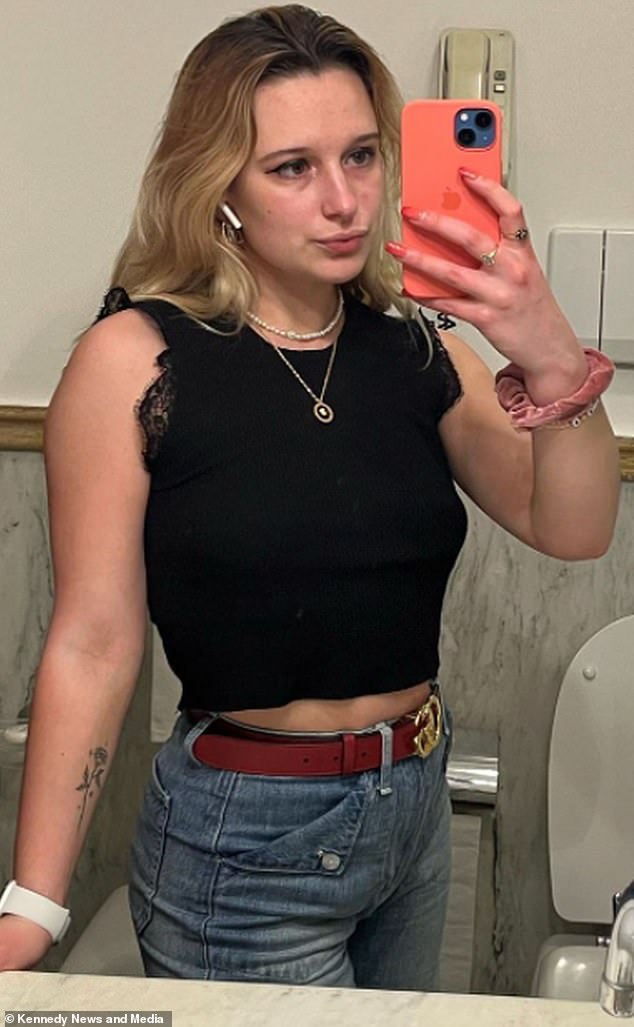 Rosiee, pictured, said NHS staff told her to keep the butt plug as a ‘souvenir’ after they extracted it from her body 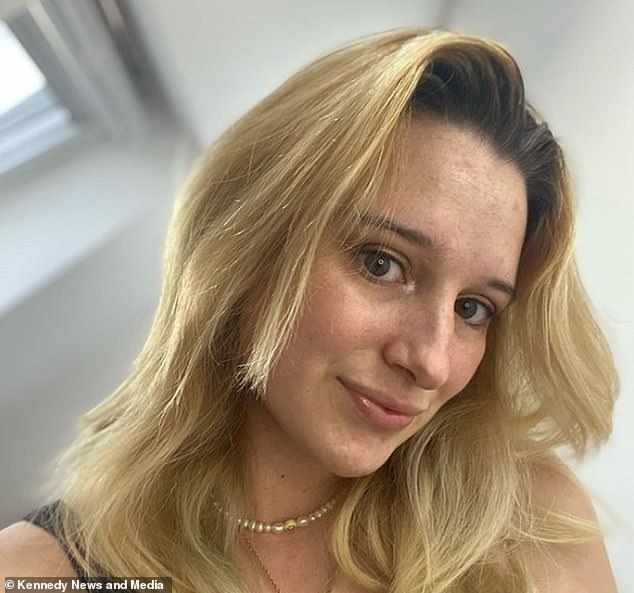 The content creator, pictured, said she now laughs about her ordeal, and is still open to try knew things, just not that exact same butt plug

‘If she couldn’t have got it with her hand I would’ve had to have an operation, so it was a relief that she did.

‘I thought I’d be the worst they’d experienced but they said they’d actually had someone come in with a vibrating toy stuck in them that was still vibrating.’

The content creator was keen to be rid of the butt plug after the stressful ordeal but says the A&E doctors encouraged her to keep it as a ‘souvenir’ of the memorable experience. 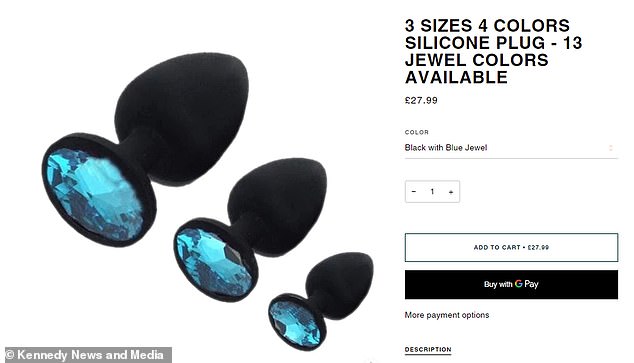 Pictured: the set of crystal embellished butt plugs Rosiee purchased. On the night of the incident, she was trying the biggest one, left 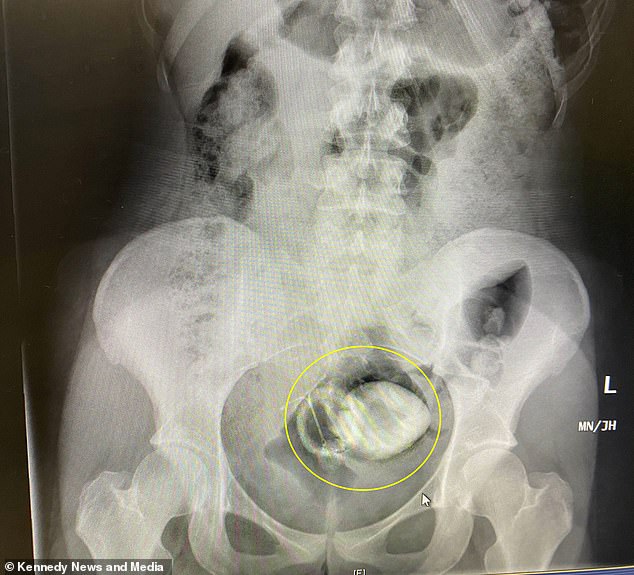 Rosiee returned the butt plug, pictured, to her ex-boyfriend after they split a few months after her mishap

But she ended up returning it to her boyfriend, who had purchased it, when they split a few months later.

She can now look back and laugh at the initially ‘horrifying’ night and is using her experience to warn others to buy good quality sex toys to avoid the same fate.

Rosiee said: ‘Initially it was absolutely awful but now it’s funny. Everyone at the hospital found it so funny because it was such a disaster but it could happen to anyone.

‘I was never really that into butt stuff anyway, so the fact that I wasn’t even that into it and still ended up in the hospital is quite funny.

‘I’m open to trying things but I’m never going to buy something [like this] again.’ 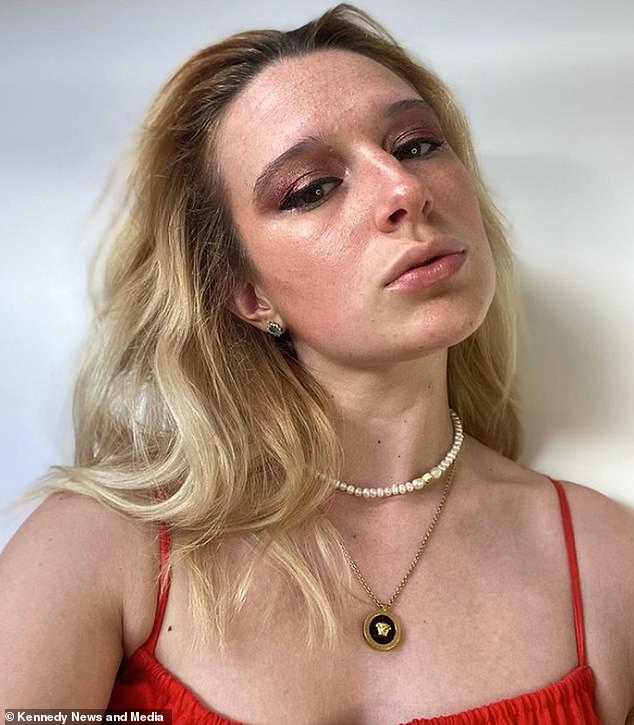