Moscow has likely seen 300,000 cases of coronavirus since the start of its outbreak, the city’s mayor has claimed.

Mayor Sergei Sobyanin said data suggests between 2 and 2.5 per cent of people living in the Russian capital have been infected, meaning 300,000 cases.

That figure is more than three times Moscow’s official tally of 92,676 cases and is slightly less than double the total for the whole of Russia, which stands at 177,160.

Sergei Sobyanin, mayor of Moscow, says up to 2.5 per cent of the city’s population has been infected with coronavirus – meaning 300,000 cases since the outbreak began

If those cases were added to the country’s official tally, it would make it the second-most infected nation in the world – second only to the US.

Sobyanin claimed the figure ‘is a huge plus’ for efforts to track and contain the virus as it spreads across his city.

But his revelation comes against the backdrop of medics mysteriously falling from windows after they challenged the official government line on coronavirus.

Two senior women doctors in Russia have died recently after falling from hospital windows amid reports they had challenged their superiors over a lack of PPE for coronavirus patients.

Meanwhile paramedic Alexander Shulepov, 37, sustained serious skull fractures falling from another window after also complaining about a lack of PPE.

Russia officially confirmed another 11,231 cases of coronavirus on Thursday, bringing the total number of infections from 165,929 to 177,160.

The total marks Russia’s single-largest daily rise in infections since the start of the outbreak, and comes after four consecutive days where the total was over 10,000. 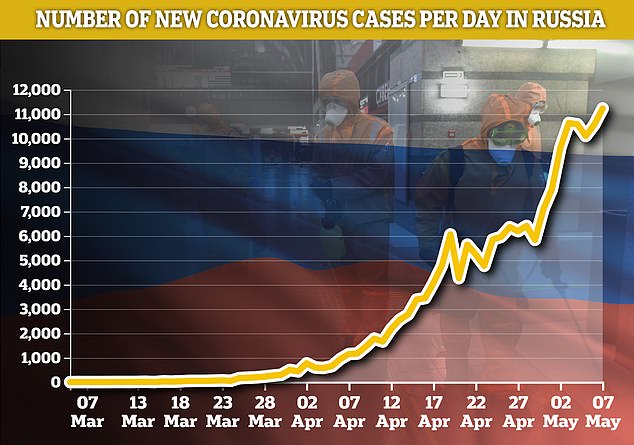 Russia had officially tallied 177,160 cases of the virus by Thursday, a rise of 11,231 on the day before marking the largest single-day rise so far 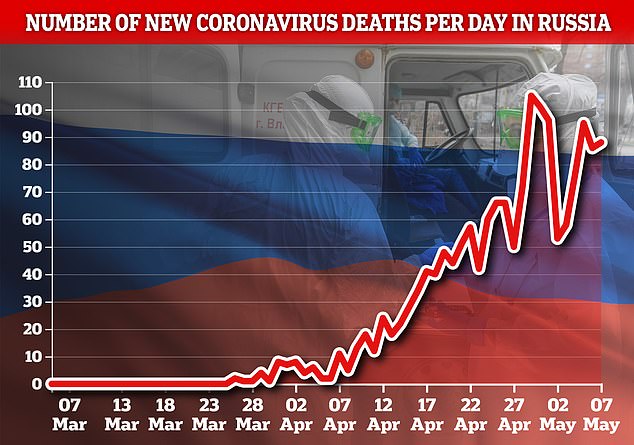 Russia also recorded a total of 1,625 deaths from coronavirus on Thursday, a rise of 88 on the previous day, though serious doubt has been cast on the figure

The figures mean Russia officially has the sixth most coronavirus cases in the world, but has a mortality rate of just 0.9 per cent.

The next closest country is Germany, with a mortality rate of 4.2 per cent.

While most countries are thought to be under-reporting deaths from coronavirus, additional scrutiny has been raised over the way Russia is tallying its figures.

‘If someone dies of a heart attack but has been diagnosed with COVID-19, the official cause of death will be heart attack,’ said Sergei Timonin from Moscow’s Higher School of Economics.

‘In other words, not all deaths of those with coronavirus will be listed as deaths from coronavirus.’

That is likely to be significant, since obese people are much more likely to die from coronavirus precisely because it can trigger heart attacks.

Local media has also reported multiple cases of deaths being wrongly recorded as pneumonia, despite patients testing positive for coronavirus.

Most countries count deaths where the patient had been diagnosed with coronavirus before they died in their total, regardless of the exact cause of death.

Amid the crisis, Putin’s approval rating has dropped to its lowest level since he became president.

Independent pollster Levada said Wednesday that just 59 per cent of Russians approved of the job he is doing in April, down from 63 per cent in March. 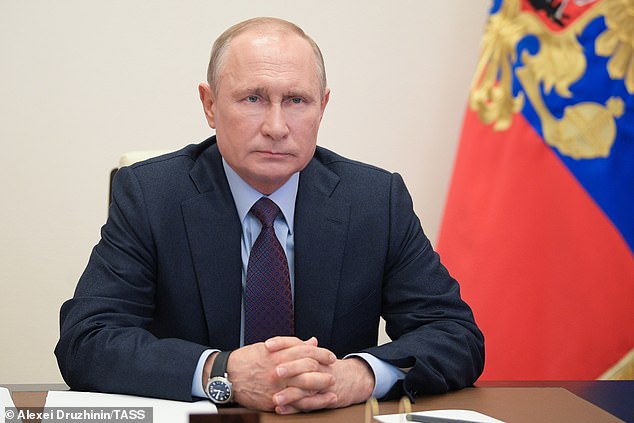 Amid the crisis, Vladimir Putin’s approval rating slipped to an all-time low of 59 per cent in April, having slipped four percentage points since March

The only time his approval rating was lower was in 1999, while he was Prime Minister, when it stood at 53 per cent.

Speaking at a government meeting, Putin told regional governors to develop plans to gradually lift lockdown restrictions but cautioned against acting too hastily to avoid a new wave of infections.

‘We should not run ahead of ourselves,’ Putin said, adding that in some regions restrictive measures should remain in place and even be tightened.

‘The price of even the smallest mistake is the safety, lives and health of our people,’ he said.

‘We should be moving forward gradually.’

Putin said Mishustin had a slight temperature but was recovering and they were in daily contact.

A non-working quarantine period is in place in Russia until May 11.

Sobyanin said stay-at-home orders would remain in place beyond this deadline but companies involved in industry and construction would be allowed to return to work.

Sobyanin said the number of seriously ill patients in the city has stayed largely stable over the past two weeks while the total number of cases is higher because of wider testing.

The number of infections in Russia has been rising by more than 10,000 a day since Sunday, in contrast to countries in western Europe that are taking steps to ease lockdown measures.

Health Minister Mikhail Murashko said some 80,000 people are currently hospitalised and more than 1,000 are on ventilators.

Despite the sharp rise, Russia’s fatality rate has remained low in comparison to countries with similar levels of infections.

Officials credit quick moves to close the country’s borders, as well as widespread testing and tracking of infections, but critics have cast doubt on the numbers. 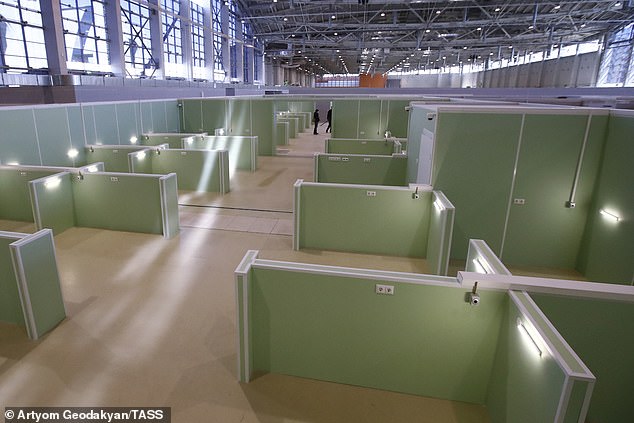 Moscow is the epicentre of Russia’s coronavirus outbreak, having official recorded 92,676 cases (pictured, a temporary coronavirus hospital in the city)

The government has announced a number of measures to buttress the economy but has been accused of not doing enough to support ordinary Russians in the face of what is likely to be a long economic downturn.

Some economists have said Moscow should be tapping its national wealth fund – which has accumulated some $150 billion – to provide more support.

But Finance Minister Anton Siluanov was quoted in business daily Vedomosti as saying the government does not want to spend too much of the fund.

‘It would not be right to max it out in two years,’ Siluanov said.

Moscow authorities have imposed strict lockdown measures, with residents allowed out only for brief trips to a shop, to walk dogs or to travel to essential jobs with a permit.

The government said there was no shortage of hospital beds but Moscow authorities are still preparing to set up temporary field hospitals around the city of more than 12 million people.

Some medical workers have complained of shortages of protective gear and said medics are dying at a higher rate in Russia than elsewhere.

An unofficial list of deaths among medics started by a group of Russian doctors listed 111 names as of Wednesday, including some from neighbouring Belarus.