Russia has told Britain to cut more than 50 embassy staff in Moscow as the diplomatic spat following the Salisbury poisoning deepens.

The UK expelled 23 Russian diplomats in the wake of the poisoning of Sergei Skripal, 66, and his daughter Yulia with the nerve agent Novichok.

London says Moscow was responsible for the attack, the first known use of a military-grade nerve agent on European soil since World War Two.

Russia has flatly denied that and has cast the allegations as part of an elaborate Western plot to sabotage East-West relations and isolate Moscow.

The Russian Foreign Ministry summoned British Ambassador Laurie Bristow on Friday and told him London had one month to cut its diplomatic contingent in Russia to the same size as the Russian mission in Britain.

It also expelled 59 diplomats from 23 other countries for backing Britain.

A spokeswoman for the British Foreign Office called the Russian move regrettable.

She did not say how many diplomatic staff in Russia would be affected. The British Embassy in Moscow says it does not make staff numbers public. 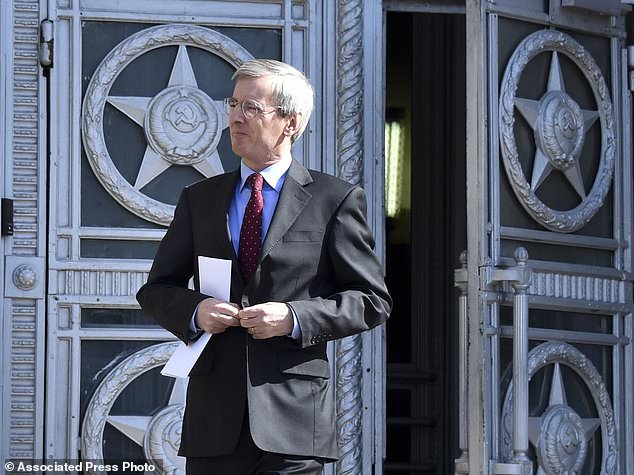 British ambassador to Russia, Laurie Bristow, leaves after a meeting at the Russian foreign ministry building in Moscow, Russia, Friday, March 30, 2018. The Russian Foreign Ministry said Friday it has ordered Britain to reduce the number of its diplomats in Moscow

Russian Foreign Ministry Spokeswoman Maria Zakharova told Reuters the demand meant Britain would have to cut ‘a little over 50’ more of its diplomatic and technical staff in Russia on top of the 23 diplomats who have already gone home.

‘We asked for parity. The Brits have 50 diplomats more than the Russians,’ Zakharova said on Saturday.

When asked if that meant London would now have to cut exactly 50 diplomatic and technical staff, she said: ‘A little over 50.’

Britain must now decide how it wants to make the cuts and may be forced to lay off some Russian support staff as well as sending home fully-fledged diplomats to satisfy Moscow’s demand. 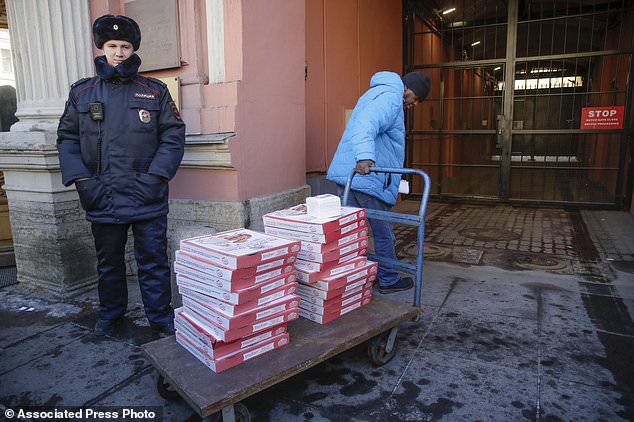 Russia ordered the closure of another British consulate, in St Petersburg, earlier this month in its first retaliatory step

Britain has an embassy and an ambassador’s residence in Moscow and a consulate in the city of Yekaterinburg.

Russia ordered the closure of another British consulate, in St Petersburg, earlier this month in its first retaliatory step.

The Russian measure is similar to one Moscow used against the United States last summer to retaliate against new U.S. sanctions when it ordered Washington to slash its diplomatic staff in Russia by nearly two thirds.

Many local Russian staffers were laid off as a result.

The March 4 poisoning in the southern English city of Salisbury has united much of the West in taking action against what it regards as the hostile policies of President Vladimir Putin.

This includes the United States under President Donald Trump, who Putin had hoped would improve ties.