Frustrated Russians spray-painted snow with the name of Vladimir Putin’s political rival in a bid to get council workers to clear it.

Moscow has seen a massive amount of snow in recent weeks and last week, the city was blanketed by its heaviest snowfall in 100 years.

But as authorities struggled to clear the streets, angry residents resorted to a tactic that some said saw quick results – painting the name of opposition leader Alexei Navalny in the snow.

Residents shared pictures on social media, saying it prompted council workers to remove the graffiti in a matter of hours.

Mr Navalny, a critic of Mr Putin, is never named by state media in the county – and the Russian President famously refuses to use his name, instead referring to him as ‘that person.’

Tatyana Grigoreva, who lives in Moscow’s Nagorny district, said she was inspired by Mikhail Kozyrev’s suggestion that residents write ‘Navalny’ on snow they wanted cleared, according to the BBC.

She posted pictures of the graffiti painted in the snow and shared video of cleaners sweeping it away.

However, Ms Grigoreva said workers in were just mixing up snow with their shovels so Mr Navalny’s name couldn’t be seen.

Another post on a Facebook group for residents said authorities took about four hours to take action. 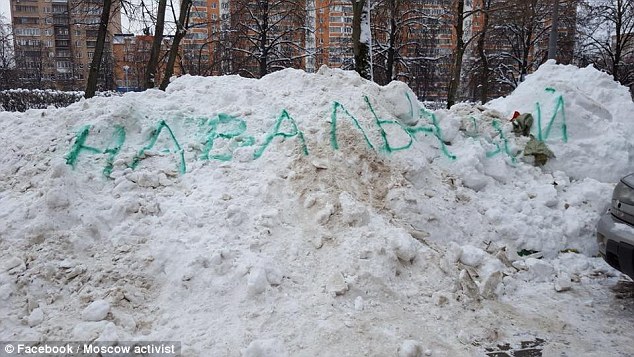 Moscow has seen a massive amount of snow in recent weeks, with some reports saying that it was the heaviest snowfall the city has seen in 100 years

Mr Navalny has called for a boycott of Russia’s election in March after he was barred from running against Mr Putin over a criminal conviction he says was politically motivated.

He is informally barred from appearing on state media and so relies on his own website and social media to spread his message, with posts drawing thousands onto the street across the country last month in support of his call for a ‘voters’ strike,’ or boycott of the polls. 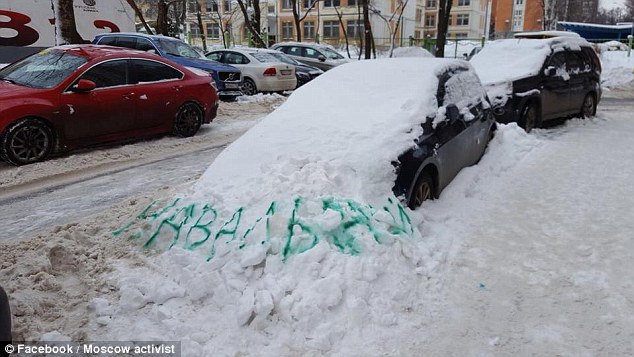 And the clever idea seemed to have worked with residents taking to Facebook to confirm that council workers had removed the graffiti, and snow, in a matter of hours

State body Roskomnadzor has threatened to block any site distributing the video, including YouTube and Instagram, but both remain accessible in Russia. 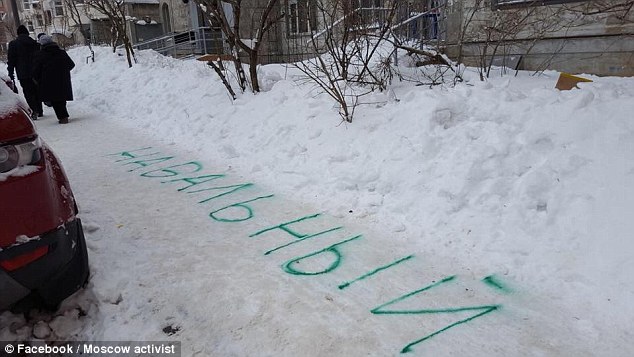 Opposition leader Mr Navalny, a critic of Mr Putin, is never named by state media in the county and is jokingly referred to as ‘that person’