Russia’s government is accusing the United States of forcing Russian national Maria Butina to falsely confess that she’s a secret agent for the Kremlin.

On Thursday Butina pleaded guilty to joining a conspiracy on behalf of the Kremlin to infiltrate the Republican party via the NRA just before Donald Trump’s presidential election in 2016.

The 30-year-old pleaded guilty to a count of ‘conspiracy against the United States’ when she appeared in federal court in Washington D.C. in a deal with prosecutors.

But the Kremlin insists that the charge is ‘ridiculous’ and she was coerced to make the confession. 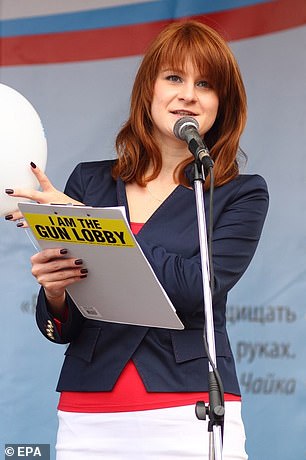 The Kremlin says that the U.S. forced Russian national Maria Butina, 30, to falsely confess that she was a secret agent for Moscow. She pleaded guilty to a charge of conspiring against the U.S. government in federal court in Washington D.C. on Thursday 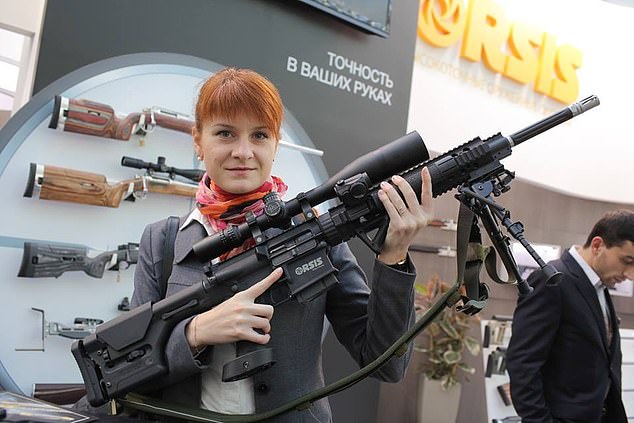 Maria Butina was able to infiltrate the National Rifle Association. She admitted she was directed by a powerful Russian handler

‘Butina confirmed that she had done a deal with U.S. investigators and confessed to being a foreign agent,’ Maria Zakharova, the spokeswoman for the Russian foreign ministry, said during a press briefing in Moscow.

‘Having created unbearable conditions for her and threatening her with a long jail sentence, she was literally forced to sign up to absolutely ridiculous charges,’ she added.

Her guilty plea sparked fury in Moscow, as the government accused the U.S. of ‘torture’ and compared her ordeal to the ‘medieval Inquisition’.

Butina is a gun rights activist who established Russian gun rights group Right to Bear Arms in 2011. She was a tough critic of Russia’s strict firearms laws and called for the legalization of short-barreled guns to civilians.

She went on to become the ‘unpaid special assistant’ to Aleksandr Torshin, a Russian senator close to Putin, a high-ranking official of the Russian Central Bank, and lifetime member of the NRA in the U.S. 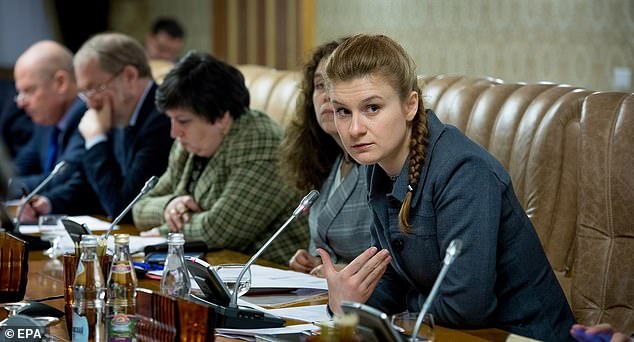 Butina is a gun rights activist who established Russian gun rights group Right to Bear Arms in 2011 and moved to the U.S. to build ties between her organization and the NRA 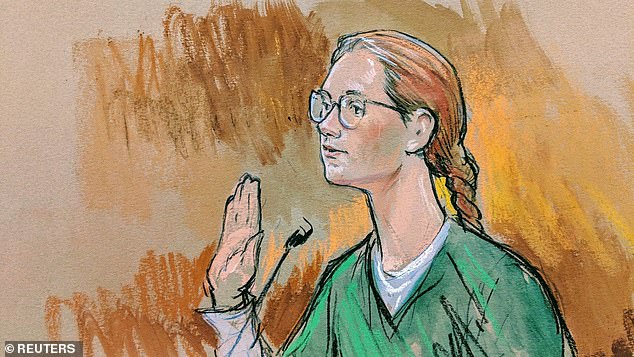 Admission: Maria Butin said ‘absolutely’ as she stood, flanked by attorney Robert Driscoll, and was asked if she understood what she was pleading guilty to on Thursday

She and Torshin moved stateside to allegedly develop close ties between the NRA and Right to Bear Arms.  She often expressed support for President Donald Trump on her various social media pages.

She’s accused of trying to create a back channel for Russia through her activist groups including the NRA.

She was arrested on July 15, 2018 in D.C. and charged with conspiracy for allegedly violating the Foreign Agents Registration Act because she didn’t register as a foreign agent.

She pleaded not guilty to the charges on July 18. She was ordered to be jailed by a district court judge pending trial.

On Thursday she admitted to acting at ‘the direction’ of a Russian official, who was not named in court, but previously been identified as Torshin.

Together they worked on the ‘Diplomacy Project’. She also used her boyfriend conservative political operative Paul Erickson, 56, to help her as she tried to use his ties with the NRA to set up the back channels.

In working with the NRA she managed to meet high profile Republicans including Donald Trump Jr and posed for pictures with Rick Santorum and Scott Walker.

In one email she sent to her boyfriend she said they were ‘coming to establish a back channel of communication’ – and he emailed another unnamed person saying that ‘reaction to the delegation’s presence in America will be relayed DIRECTLY’ to Vladimir Putin.

When she got senior members of the NRA to come to Moscow she emailed her handler: ‘We should let them express their gratitude now, we will put pressure on them quietly later.’ 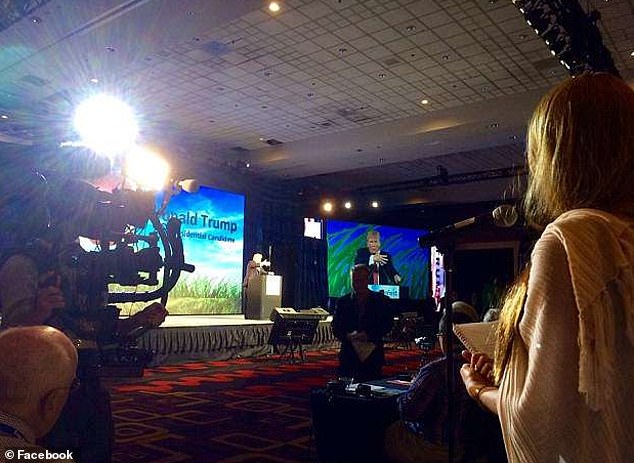 Question time: This was the moment Maria Butina questioned Donald Trump on relations with Russia at a 2015 ‘freedom forum’ event linked to the NRA 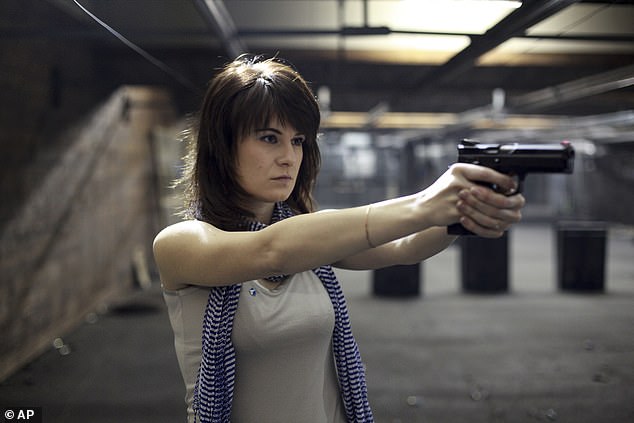 Maria Butina, a gun-rights activist poses for a photo at a shooting range in Moscow, Russia. Russian woman Maria Butina has been jailed in the U.S. on charges that she tried to infiltrate U.S. political organizations as a covert Russian agent 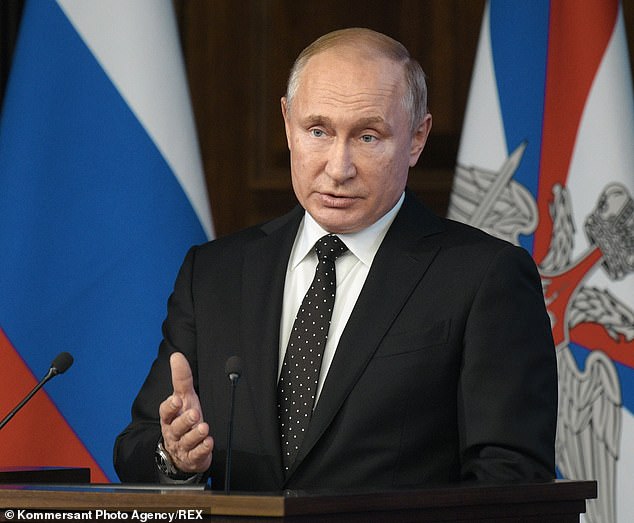 Russian Foreign Ministry spokesperson said: ‘Having created unbearable conditions for her and threatening her with a long jail sentence, she was literally forced to sign up to absolutely ridiculous charges’

‘We designated her as a political prisoner from the very first days,’ Zakharova said to CNN last week.

‘It’s not about justice, it’s not justice. It’s just inquisition. It’s medieval inquisition. Because she is intimidated, she was tortured and was not treated like a human being, not like a woman. I think she was treated and is still treated probably as a terrorist or something like that,’ she added.

‘All the details of that case was closely connected with (the) political relationship between Russia and the United States because all that happened just after two presidents met each other and held negotiations and of course that was (more) evidence that this is a political case and she is a political prisoner,’ she said.

Butina’s legal team and U.S. prosecutors face a 5pm (EST) deadline to submit legal filings regarding their positions on the case at the U.S. District Court in Washington.

She faces up to five years in prison and deportation from the U.S.