The long, hard road to recovery from a horror tackle that left him paralysed has delivered former NRL star Mose Masoe back home to Australia – where he continues to defy medical expectations.

The ex-Panthers, Roosters and Dragons prop was playing in a friendly match ahead of the English Super League in February 2020 when his whole life changed in an instant.

Masoe was tackled while playing for Hull Kingston Rovers in a pre-season friendly against against Wakefield Trinity. It was an innocuous tackle that led to a career-ending spinal injury that forever changed his life and that of his family.

He was rendered a quadriplegic, paralysed from the neck down, and told by doctors that a life in a wheelchair was the best outcome he could expect. But Masoe could not accept that.

He has revealed to the Sydney Morning Herald that he and partner Carissa had been struggling to concieve their third child, but they were pregnant and their ‘miracle baby’ was due in six months time. 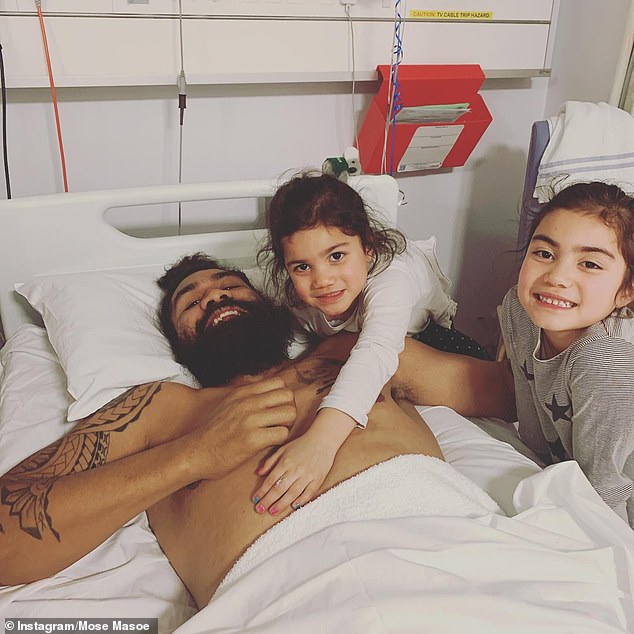 ‘I had to try and get as good as I can get so I would be able to hold this kid when he came out. That was my goal and my biggest drive when it happened,’ said Masoe, who is now living on the Sunshine Coast in Queensland with his family.

He took his first steps eight months after the injury. Then, a few months later, Masoe’s first outing after leaving the hospital was a moment he will never forget.

While waiting to cross the main street in Hull with his family, a couple of drivers recognised him and sounded their horns to show their support. Several other motorists then joined in.

‘All of a sudden 100 people were beeping their horns,’ Masoe said.

‘I kept telling myself, “Don’t fall over”. The light had gone red. They were all waiting for me to cross the road, beeping their horns in support. It was a nice moment I will never forget.’ 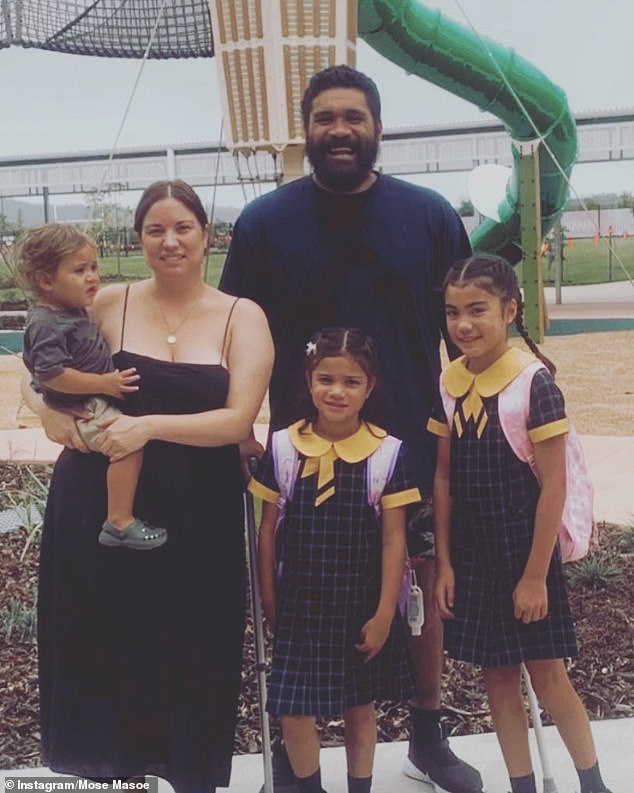 Masoe with his partner Carissa and children Evie-Rose,  Marlowe and Lui

Before jetting back to Australia, Masoe had a day of triumph in the UK. He signed up for the Flex Health fundraising event involving people who had to relearn how to walk after spinal injuries at East Park in Hull.

Before the event, Masoe had set his sights on walking a single kilometre – which would have been a huge feat in itself. He walked 5km.

‘I started at Flex in a wheel chair and couldn’t walk more than 20 minutes and today we are going to try and walk at least a kilometre,’ he said before the event.

‘It will be nice to walk around the park and just say bye to a lot of people who supported me along the way.’

Was great to help out a fellow SCI.
Liam’s 5km around east park had to be the hardest thing I’ve ever had to do. Well done to Liam, Julie, Mark, Pete and Max. Thank you to everyone for the ❤️ and support.

If you can head over to @FlexHealth5 & donate to top bloke.Thank you ❤️ pic.twitter.com/XI1lgrj5Dh

While Masoe’s story is one of hope and inspiration, he is not back to ‘normal’ and he never will be.

Not only has his playing career been dashed, but he can’t take part in simple activities like playing with his children in the park.

There is plenty more work, rehabilitation and recovery to come but he remains optimistic and determined.

However, he admitted he would gladly spend the rest of his life in a wheelchair if it meant being able to use the toilet like he used to be able.

Last night in the uk for the bro @mosemasoe @carissa.crews and the 3 kids. It’s been a pleasure brother. Wish u guys a safe flight back home tomorrow and all the best back in Aus. Look forward to catching up again down the track 🙌🏽❤️ pic.twitter.com/OUfF9d5Szd

‘I would give up my legs to be able to have a normal bladder and bowel,’ Masoe said.

‘I would happily sit in a wheelchair for the rest of my life if I could just go to the toilet normally. That’s how big of an issue it is.

‘There are days I won’t go out because I haven’t had a bowel movement for a few days. I think everyone’s bowel contracts three times an hour. But mine is three in a day.’

According to an insurance company in England, they are likely only entitled to a pay-out of £5000 for the career-ending, life-altering injury. Sportsbet and the Men of League foundation raised $250,000 through the Try July campaign last year.

Thank you everyone behind the scenes at the @mosemasoefund for putting this on for us.

Thank you everyone who came and for those that couldn’t thank you for being there through the ups and downs and the slowly getting back up! Grateful ❤️

Those funds will be used to build a home on the Sunshine Coast that will suit the needs of the former Sydney Rooster, Penrith Panther, and St George Illawarra front-rower.

‘If we didn’t have that help from everyone in the rugby league community I don’t know if we would have survived,’ he said.

What happens next is still unknown for Masoe. He wants to return to work but last year admitted he might need new qualifications to achieve his dream of one day working with a rugby league team again.

‘I’ve no qualifications for an office job. Mine are all about working outdoors, so I’ve got to see what I can do,’ he told WWOS.

‘Getting involved with a rugby league team is the goal but I guess I’d be down the pecking order compared to people who went to university. It’ll just be a case of waiting and seeing.’

While the Masoe family are currently battling to accommodate their own circumstances, it has not stopped them giving back.

The Mose Masoe Foundation was established while they were in the UK with the goal of raising money for Masoe’s recovery but also grants for other current and former players that have suffered spinal injuries or mental illness.

You can donate to the Mose Masoe Foundation here.