Most Americans have never been tested for HIV, CDC report reveals

Most Americans have never had an HIV test, and less than a third of those most at-risk have been checked in at least the past year, according to new CDC data.

US health officials have been armed with funds and resources to launch a multi-pronged campaign to drastically reduce HIV transmissions in the near future, aiming for an end to new diagnoses by 2030.

First, they earmarked the 50 cities and seven rural areas with the highest rates of HIV transmissions in the country – most of which are in impoverished parts of the South, where many do not have health insurance.

Now, researchers are studying where the gaps are in testing, in order to prevent accidental transmissions from people who could be on viral-suppressing drugs, which make HIV untransmittable.

The new report published today in the CDC’ Morbidity and Mortality Weekly Report, to coincidence with National HIV Testing Day, shows those gaps are many, gaping and widespread.

Fewer than 40 percent of all Americans were tested for HIV in the last year, and less than 30 percent of those deemed most at-risk – i.e. men who have sex with men, and intravenous drug users – had done so.

In the 50 cities with the highest rates of transmissions, fewer than 35 percent had been tested.

In the CDC’s targeted rural areas, just 26 percent of people had been tested for the sexually-transmitted disease.

‘As we encourage those at risk for HIV to seek care, we need to meet them in their journey.

‘This means clearing the path of stigma, finding more comfortable ways of delivering health services, as well as learning from individuals already in treatment so the journey becomes easier for others who follow.’

Around one in seven people living with HIV don’t know they have it, according to CDC estimates.

Those who are at-risk of HIV can take PrEP (pre-exposure prophylaxis), which lowers the risk of contracting HIV by 99 percent – in other words, more effectively than the Pill prevents pregnancy.

Those diagnosed with HIV can take ART (anti-retroviral therapy). After six months of religiously taking the medicine, a person’s viral load becomes undetectable on standard tests, and untransmittable to sexual partners.

The advent of PrEP and ART have not eliminated HIV but meant that it is possible to live a long and happy, healthy life with the virus, without feeling like a vector of disease or fearing that HIV-negative partners would be affected. 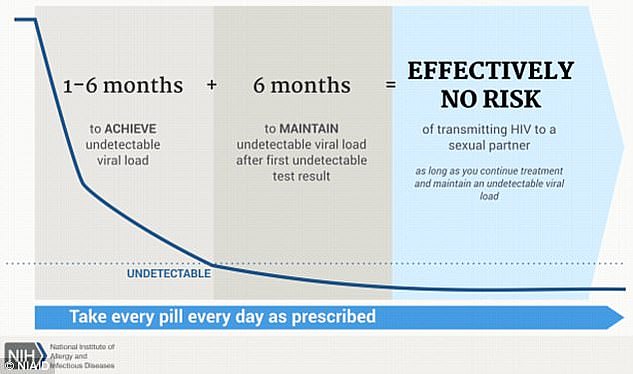 However, going through the process of testing can be more complex than it sounds at first blush. There’s the hassle of booking an appointment and going to the clinic, which is an obstacle many struggle to overcome. In some cases, there’s a charge to pay for the services, which can be another deterrent. And for some, particularly homosexual minorities living in the South, there is still plenty of stigma to overcome when going to test for HIV; it can feel like being outed.

The new program to end HIV, assembled earlier this year by the top US health officials, will tackle ways to make testing more accessible.

‘Knowledge is power when it comes to HIV—that is why everyone in America should get an HIV test at least once in our lives,’ said Jonathan Mermin, MD, director of CDC’s National Center for HIV/AIDS, Viral Hepatitis, STD and TB Prevention.

‘It is a simple way we can all help end the HIV epidemic in the US.’