Jeremy Corbyn faces a mass revolt by millions of Labour supporters over his refusal to agree to a snap election.

A survey for the Mail found that 64 per cent of those who voted for his party in 2017 want an early poll.

It also showed that most voters think ‘the Establishment’ is determined to stop Brexit.

The opinion poll was carried out after the Supreme Court ruled that Boris Johnson’s suspension of Parliament was unlawful.

The Prime Minister threw down the gauntlet to Mr Corbyn tonight by giving the Opposition the chance to table a no confidence motion in the Government, triggering an election.

The Labour leader rejected the move, prompting Tory claims he was ‘running scared’.

The Survation survey showed that 55 per cent of voters want an early election, compared with 29 per cent who don’t. Only 28 per cent of Labour voters oppose the move.

Mr Johnson believes an early election could be his best chance of breaking the Brexit deadlock. Mr Corbyn says he wants to delay until a No Deal departure has been ruled out.

The Supreme Court ruling prompted fresh claims by some Brexiteers of a plot by ‘the Establishment’ – a loose term applied to institutions ranging from the Commons and Lords, the civil service, big business and the judiciary to the BBC.

Asked in the poll if they believed ‘the Establishment wants to stop Brexit’, 52 per cent agreed; 28 per cent disagreed and 20 per cent did not know.

However, voters have little sympathy for Tory protests about the Supreme Court’s verdict. A total of 41 per cent rejected the claim by Cabinet minister Jacob Rees-Mogg that the court’s ruling was tantamount to a ‘constitutional coup’; 32 per cent backed him. Another 62 per cent said Mr Johnson should apologise to the Queen for misleading her. 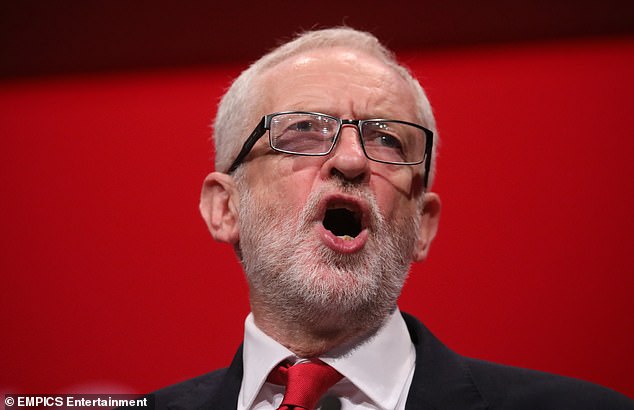 And the survey is likely to increase calls for Attorney General Geoffrey Cox and Mr Johnson’s chief adviser Dominic Cummings to be fired.

More than half of voters said whoever advised Mr Johnson to prorogue Parliament – widely believed to be Mr Cox and Mr Cummings – should lose their jobs over the fiasco. While condemning the Government’s handling of the matter, there was scepticism over whether the recall of Parliament will do much good. A total of 53 per cent said it would not help solve the Brexit crisis; 32 per cent said it would. 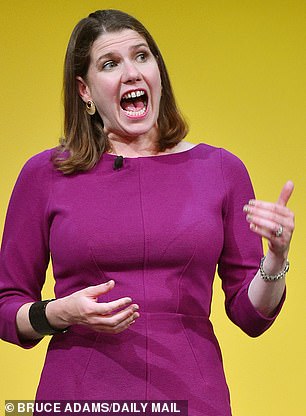 The poll came on a dramatic day in Westminster, which saw Mr Johnson brand Mr Corbyn a coward for turning down the offer of a general election – just days after demanding one. Amid furious scenes in the Commons, the Prime Minister spoke of a ‘zombie parliament’ and accused opposition MPs of paralysing the country and trying to wreck Brexit.

He threw down the gauntlet to opposition parties, saying he would clear parliamentary time for a formal vote of no confidence today if any of them – including the smaller parties – wanted to trigger a general election. Last night it appeared the challenge would be refused.

Mr Johnson was criticised for dismissing as ‘humbug’ complaints that he was using inflammatory language. Labour MP Paula Sheriff had referred to the 2016 murder of Labour MP Jo Cox as she called for Mr Johnson to moderate his language.

Mr Johnson caused further controversy by saying that ‘the best way to honour the memory of Miss Cox was to ‘get Brexit done’. 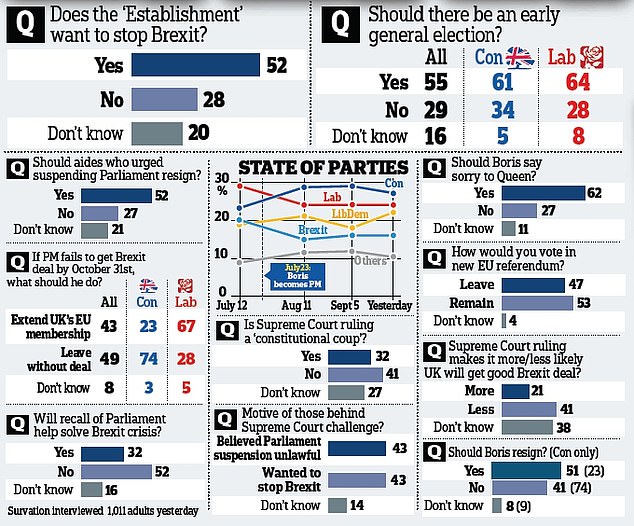 The poll shows the Tories are on 27 per cent, three points ahead of Labour, with the Lib Dems on 22 and Mr Farage’s Brexit Party on 16.

Despite widespread criticism of Mr Johnson over the suspension of Parliament he retains a massive personal lead over Jeremy Corbyn.

Asked who would make the best Prime Minister, 41 per cent chose Johnson, with 21 per cent favouring Lib Dem leader Jo Swinson and just 18 per cent for the Labour leader in third place.

The survey shows how divided the country has become. Asked how they would vote in the event of a second EU referendum, 53 per cent said they would vote to Remain, with 47 per cent for Leave. 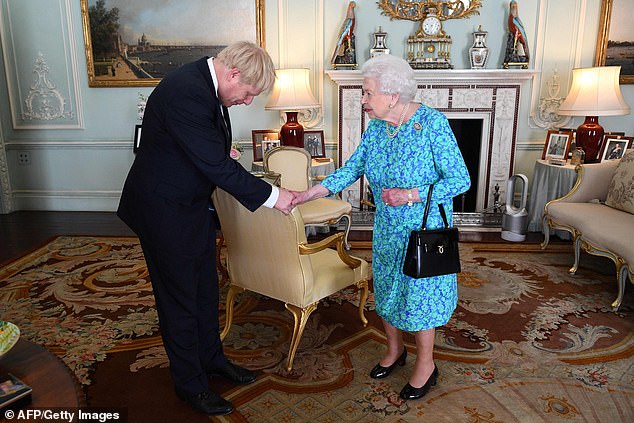 Asked who would make the best Prime Minister, 41 per cent chose Boris Johnson. The Prime Minister pictured with the Queen as the newly-elected leader of the Conservative party

However, when asked what Mr Johnson should do if he is unable to win a deal from Brussels, 49 per cent said Britain should leave without one.

A surprisingly high number of Labour voters – 28 per cent – said Britain should opt for No Deal on October 31; 67 per cent said we should extend our EU membership. 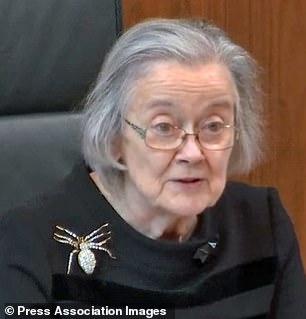 A total of 43 per cent believed the motive of those behind the Supreme Court challenge – including campaigner Gina Miller and former Tory prime minister John Major – was the belief that the suspension of Parliament was unlawful; the same number said they believed the main motive was to stop Brexit.

Damian Lyons Lowe of Survation said: ‘The figures show the public think Mr Johnson only has himself to blame for the Supreme Court ruling against the prorogation of Parliament.

‘The Conservative lead over Labour of 3 per cent is not enough to win a Commons majority, but there are grounds for cautious optimism for Mr Johnson’s strategy. The survey suggests his plan to stage a “people versus the Establishment” snap election to end the Brexit impasse, with Johnson on the side of the people, may work.’

At first glance, the Survation poll is yet another blow to Boris Johnson’s standing. The public disapproval of his Government over the controversial suspension of Parliament could not be clearer.

A majority believe whichever of his Downing Street team was responsible for the reckless and totally counter-productive move should pay by losing their job.

Voters believe that, assuming he hasn’t already done so, the Prime Minister should do the decent thing and say sorry to the Queen for misleading her.

And there is little sympathy for Jacob Rees-Mogg’s squeal of protest that the Supreme Court ruling was tantamount to a ‘constitutional coup’.

Equally, the Conservative lead over Labour – of just 3 per cent – is nowhere near enough to give Johnson the Commons majority he craves to resolve Brexit.

The Parliamentary arithmetic and political climate is so volatile it is impossible to convert each party’s poll rating into Commons seats. Suffice to say Johnson would probably be no better off than he is today. And he could lose.

And yet, the poll is far from being all bad news.

There is more than a glimmer of hope that Johnson’s strategy of holding a snap election on Brexit on the basis of ‘The People versus The Establishment’ – with him playing the heroic role of the people’s Brexit tribune – could just succeed.

For a start, there is overwhelming support for an early election from both Conservative and Labour voters.

Second, although the Conservative lead over Labour is a mere 3 per cent, Mr Johnson’s Prime Ministerial rating is at 41 per cent – more than double the Labour leader’s dismal 18. To add insult to injury, voters would rather see inexperienced Lib Dem leader Jo Swinson in No10 than Corbyn. There is more comfort for Mr Johnson among Labour’s die hard Brexit supporters in working class strongholds like the North.

Mr Corbyn is holding out against a snap election in his determination to stop the Prime Minister taking Britain out of the EU on October 31 if he cannot get a deal. But more than one in four Labour supporters say Mr Johnson should do precisely that.

Of course, the main obstacle to Mr Johnson winning a Commons majority is neither Corbyn nor Swinson, but Tory nemesis Nigel Farage – supported by 16 per cent in the Survation poll.

Nearly 70 per cent of Brexit Party supporters voted Tory in the 2017 election.

If Mr Johnson could somehow get a deal and get us out on October 31, the majority of those 70 per cent could be expected to return to the Tory gulf. That would push the Conservatives up to the mid 30s and up to ten points clear of Labour. If that happened Mr Johnson would win outright.

Having allowed himself to be tied in Parliamentary knots by Labour, the Lib Dems and the SNP – aided and abetted by Remainer former Tory MPs – his hopes of getting a deal look slim.

In that event, the election would take place with Johnson having been forced to eat his words about leaving on October 31, ‘do or die’.

And Farage would claim – with some justification – that disaffected Tory Brexiteers should stick with him.