Most ‘meat’ won’t come from dead animals by 2040: 60% will be vat grown or replaced by vegan produce

The majority of meat eaten in just two decades will either be grown artificially in vats or substituted with plant-based vegan products that look and taste the same.

Artificial meat’s rise is predicted by industry experts interviewed for a new report, which suggests that only 40% of meat made in 2040 will come from animals.

The study highlights concerns over the environmental impact of conventional meat production and the welfare of animals that have been industrially reared for food.

HOW DID BEYOND MEAT MAKE PLANT-BASED BURGERS?

It took Beyond Meat seven years to create the plant-based burger ‘understanding meat’ and ‘rebuilding’ it in a plant-based form.

Beyond Burger is made with 20 grams of vegetable protein and includes pulverised beetroots for the bleeding effect.

To develop the illusion of a juicy, ground-beef patty, the firm looked to researchers like Stanford University structural biologist Joseph Puglisi to devise a plan for layering plant fat.

The result was a burger that stays moist, pink and juicy on the inside while cooking dark brown on the outside — all while smelling like cooked ground beef.

The report was compiled by the global consultancy firm AT Kearney and based on interviews conducted with various experts in the field.

The conventional meat industry raises billions of animals and turns over £785 billion ($1 trillion) every year.

However, meat production comes with huge environmental impacts, scientists have warned, among which are greenhouse emissions that drive climate change, the pollution of rivers and oceans and the destruction of wild habitats for farmland.

Many people also have concerns over the welfare of animals raised in industrial farms.

‘The large-scale livestock industry is viewed by many as an unnecessary evil,’ the report said.

‘With the advantages of novel vegan meat replacements and cultured meat over conventionally produced meat, it is only a matter of time before they capture a substantial market share.’

The list of companies that are using plant-based ingredients to simulate animal-derived foodstuffs from burgers to scrambled eggs continues to grow, and includes such firms as Beyond Meat, Impossible Foods and Just Foods.

In total, around £784 million ($1 billion) has already been invested in the vegan product market, among the supporters of which are companies that presently dominate the conventional meat industry, AT Kearney has reported.

Los Angeles, California, based Beyond Meat — who provide vegan alternatives for chicken, beef and pork — raised £188 million ($240 million) when the firm went public back in May 2019 and has since seen its shares double. 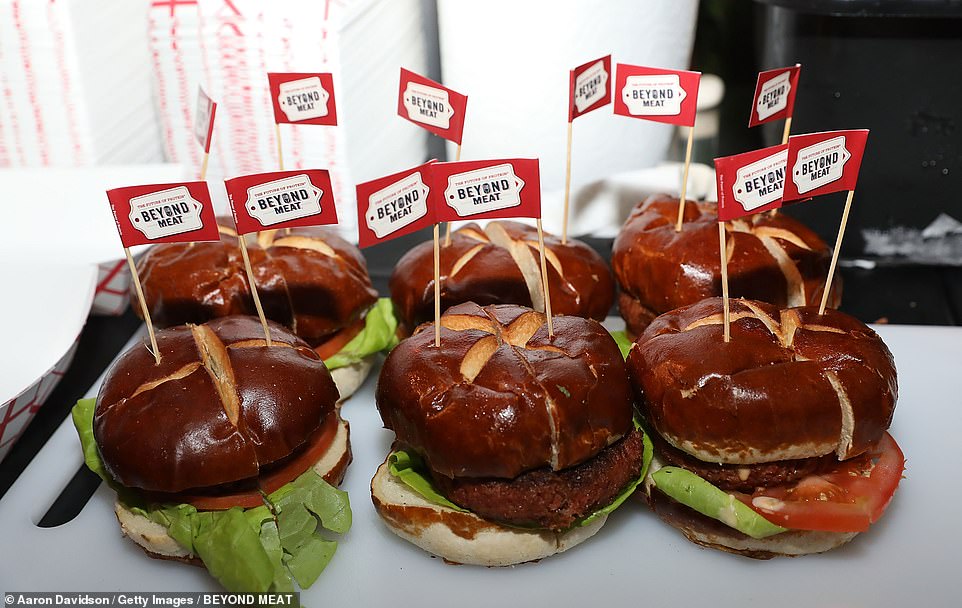 Artificial meat’s rise is predicted by industry experts interviewed for a new report, which suggests that only 40% of meat made in 2040 will come from animals 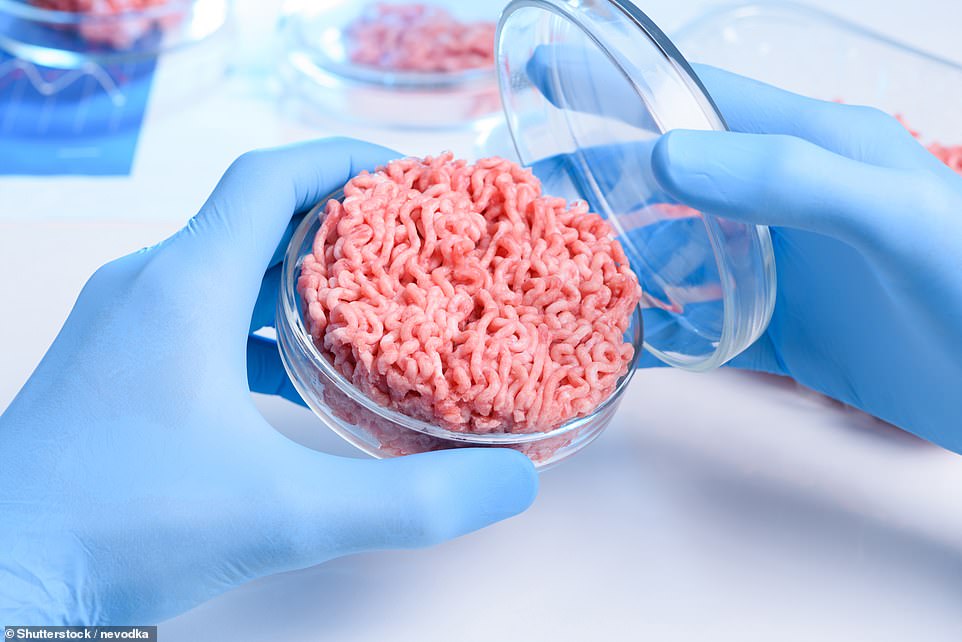 Meanwhile, corporate researchers are working to develop meat cells that can be grown in the laboratory, thereby producing real meat without the dependence on raising and butchering animals.

While such lab-grown meat has yet to reach the supermarket shelves, AT Kearney predict that these artificial meats will dominate the market.

‘Cultured meat will win in the long run,’ the report said.

This is because meat grown from culture better reproduces the taste and mouth feel of conventional meat in comparison with plant-based alternatives.

‘However, novel vegan meat replacements will be essential in the transition phase,’ the report also noted. 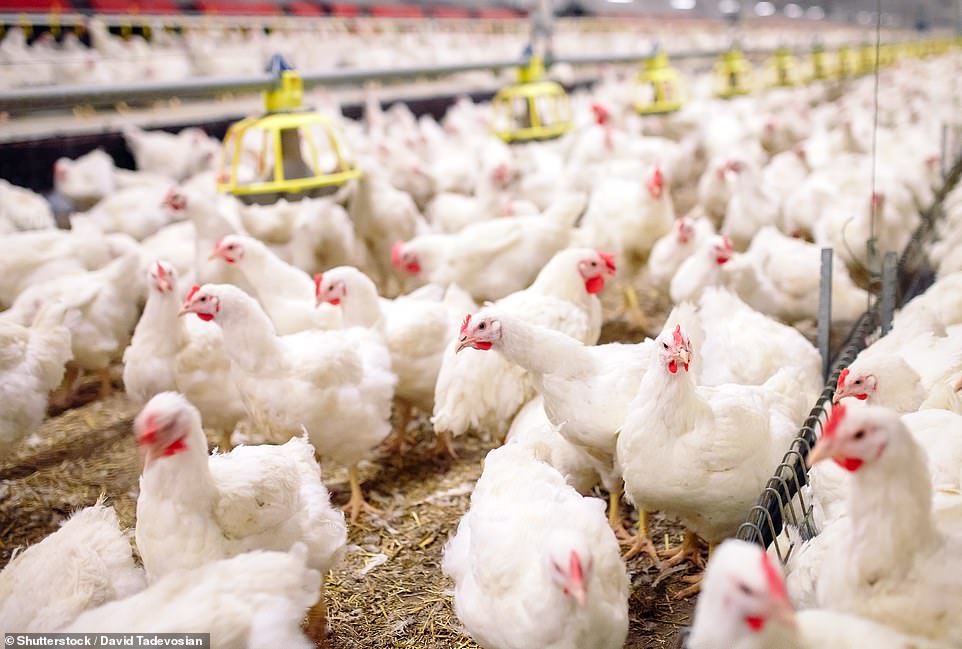 One of the advantages of both types of alternative meat is that they are more efficient, the report notes.

Almost half of the crops grown globally are fed to livestock, but only 15% of the calories from these plants actually end up being eaten in meat by humans.

Both cultured meats and plant-based meat alternatives, however, retain around 75 per cent of their originally input calories for consumption.

‘The shift towards flexitarian, vegetarian and vegan lifestyles is undeniable, Carsten Gerhardt, a partner at AT Kearney, told the Guardian.

A flexitarian — or semi-vegetarian — diet is one in which people may eat meat and animal products in moderation, but encourages the primary consumption of plant-based foods.

Many consumers, Mr Gerhardt continued, are ‘cutting down on their meat consumption as a result of becoming more conscious towards the environment and animal welfare.’

The reported noted that surveys of consumers in China, India and the US suggest that potential customer wariness towards cultured meat will not provide a hurdle for its widespread adoption.

‘For passionate meat-eaters, the predicted rise of cultured meat products means that they still get to enjoy the same diet they always have, but without the same environmental and animal cost attached,’ Mr Gerhardt added.

The full findings of the report were published on the AT Kearney website.

HOW DOES DIET AFFECT THE CLIMATE?

This included a ‘business as usual’ scenario, one that follows global guidelines including minimum amounts of fruits and vegetables and limits on red meat, sugar and total calories, a vegetarian diet, and a vegan diet.

Adopting a diet in line with the global guidelines could avoid 5.1 million deaths per year by 2050, while 8.1 million fewer people would die in a world of vegans.

When it comes to climate change, following dietary recommendations would cut food-related emissions by 29 per cent, adopting vegetarian diets would cut them by 63 per cent and vegan diets by 70 per cent.

Dietary shifts could produce savings of $700 billion to $1,000 billion per year on healthcare, unpaid care and lost working days, while the economic benefit of reduced greenhouse gas emissions could be as much as $570 billion.