The zoo in the Iraqi city of Mosul has re-opened four years after the Islamic State declared the formation of its caliphate in the city.

Zoo owner Shaban Mohammed fled the city in 2014 when IS took control, leaving a park full of animals, on the banks of the Tigris, locked in their cages.

The battle to retake Mosul saw much of the zoo destroyed and many of the animals were killed or taken by the jihadists. 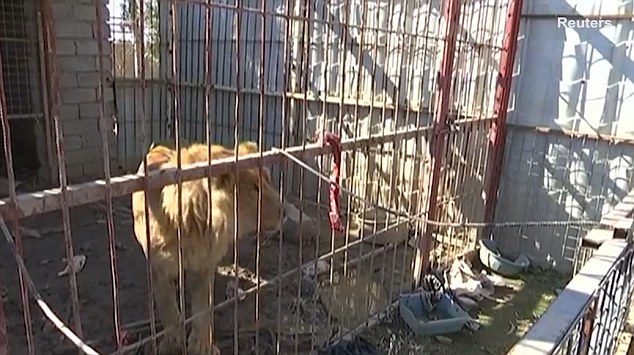 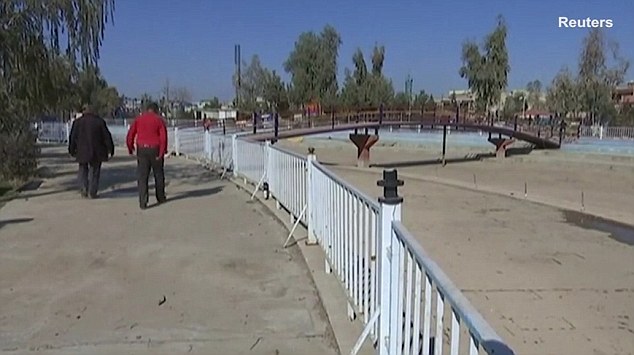 The zoo is still quiet following the trauma of the war, but it is hoped that it will rapidly regain its former status 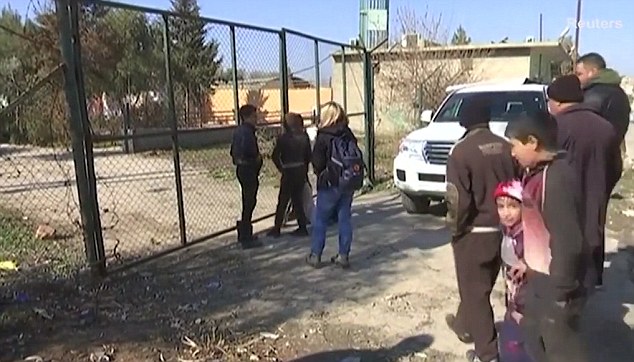 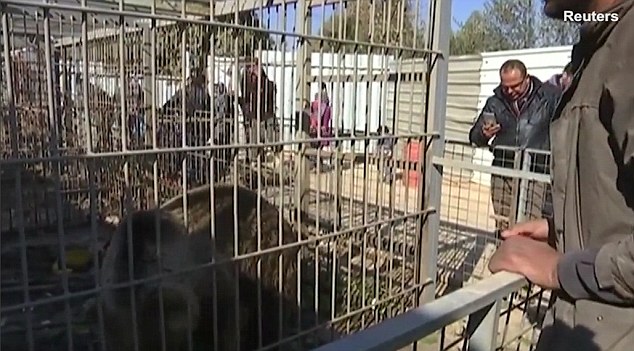 The park, which also features colourful children’s rides, sits in the eastern half of the city that was retaken by Iraqi forces last year

Mr Mohammed returned after ISIS were defeated and is now looking to rebuild his business, thenational.ae reported with up-to-date video of animals again on view at the zoo.

Renovations of the zoo – in al-Murur park, an eastern area of Mosul – have now begun.

The zoo was recently liberated from ISIS terrorists and new animals have been purchased, among them a lion and a cub that were smuggled from Africa via Turkey.

While the squalid conditions for the animals are still below international standards – with small cages and animals in poor health – commentators say the zoo deserves plaudits for re-establishing some degree of peace and normality out of the chaos of the fighting.

The zoo’s re-emergence is especially significant given that it is seen by many as a beacon of hope for Mosul.

Mr Mohammed claims he will build better facilities once his finances and his business improves.

Last month shocking photos revealed the suffering of Mosul zoo animals after they were left to starve to death by IS thugs.

An emaciated lioness was found cowering in a squalid cage and lying on exposed cables at Al-Murur public park after the area was liberated from the terror group.

Another heartbreaking image shows a bear looking mournfully through the rusting bars of its enclosure. 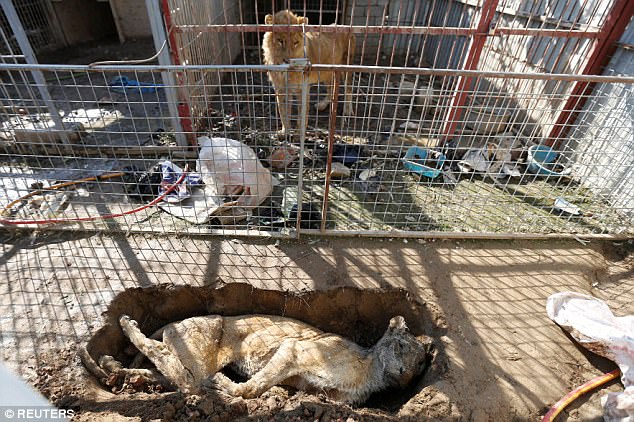 A lion in its cage looks at a dead lioness in a grave at Mosul’s zoo, where animals were left to starve to death in photos that emerged in February 2017 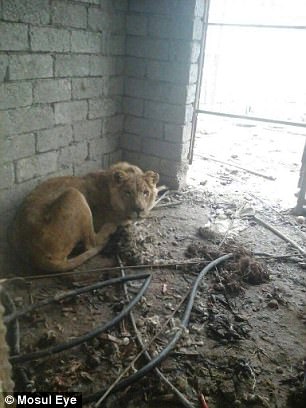 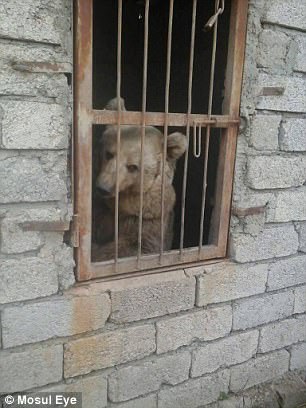 The photos from February 2017 revealed the suffering of Mosul zoo animals, including an emaciated lioness (left) and a caged bear (right) after they were left to starve to death by cruel ISIS thugs

Separate pictures showed the filthy, ramshackle cages where animals were neglected during the terrorists’ reign.

Like much of the city, the once-peaceful animal park has been destroyed by months of fighting between Iraqi forces and Islamic State militants.

When the military advanced into Mosul, Nour Park, which had been home to a range of animals from monkeys to horses, was transformed into an ISIS staging ground for attacks on Iraqi troops. 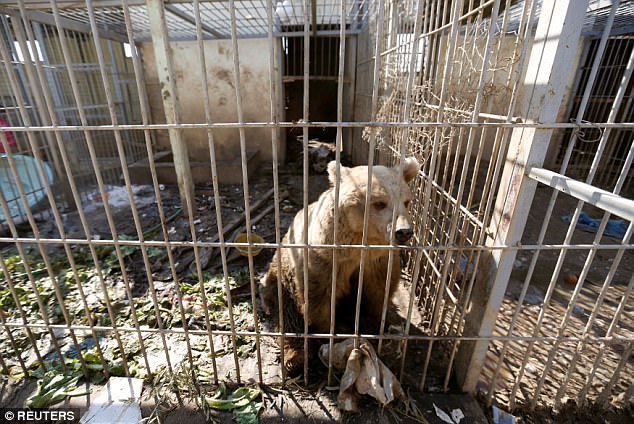 Like much of the city, the once-peaceful animal park has been destroyed by months of fighting 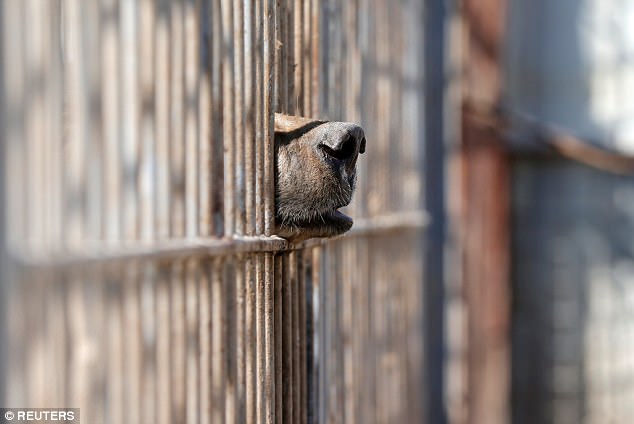 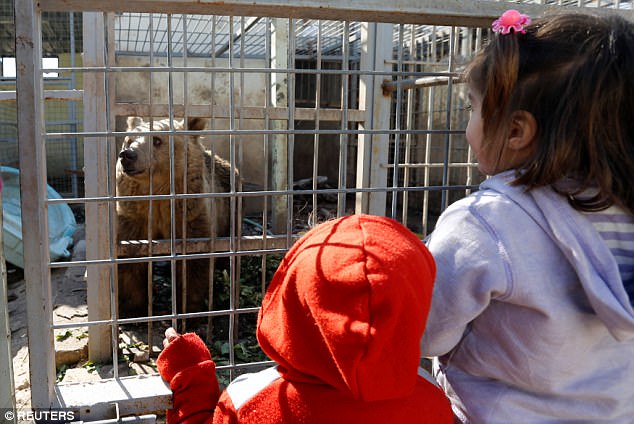 Children peer through the bear’s enclosure at Mosul Zoo. Local residents have been doing their best to keep the animals alive (February 2017)

‘Neighbours had been feeding the animals, but when the fighting became too fierce, they could not leave their homes. Some of the animals starved to death. Others escaped or were killed in the fighting.

Anti-ISIS group Mosul Eye uploaded the pictures in a desperate plea for help from animal charities. They later revealed that the lioness had died.

However, it is understood that an animal expert from Kurdistan has stepped in to offer assistance.

Saif al-Bassef, a volunteer sent by the Kurdistan Organisation for Animal Rights, brought the first substantial food for a month. ‘It’s shameful to watch the animals struggle, they need help. They are not connected to the war,’ he said. 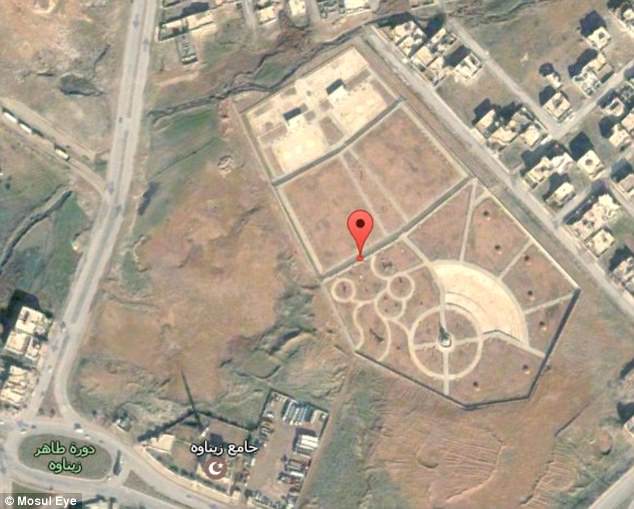 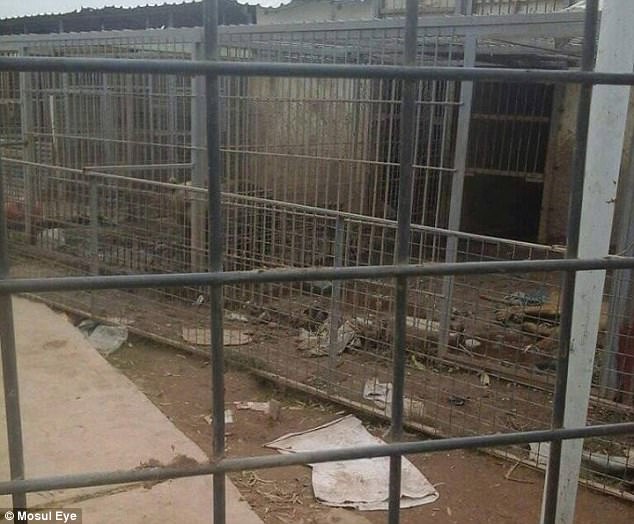 Separate pictures show the filthy, ramshackle cages where animals were neglected during the terrorists’ reign (February 2017) 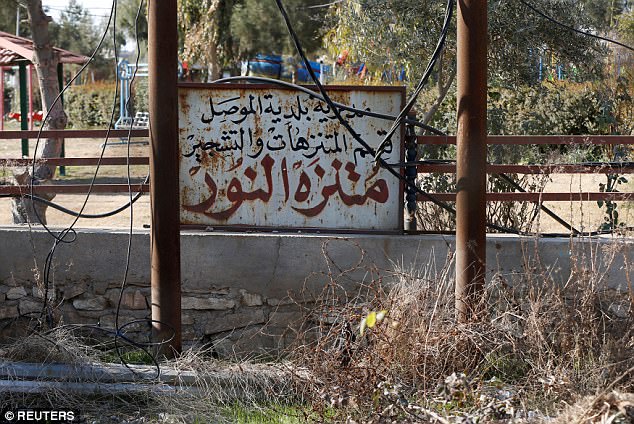 A sign outside the now-abandoned zoo, which was once a popular attraction for families, reads ‘Nour Park’ in Arabic (February 2017) 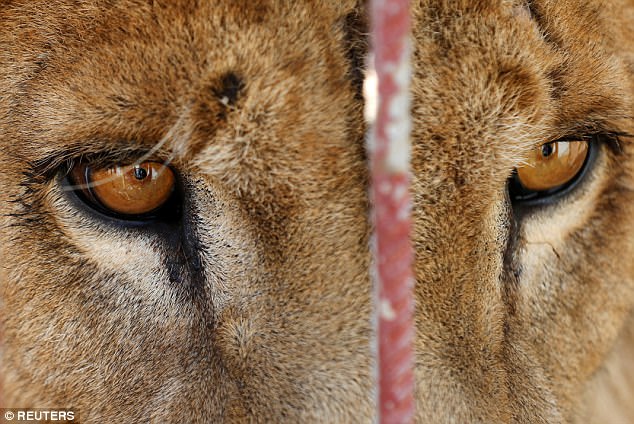 A starving lion is seen in its cage, one of several animals which was cruelly abandoned by Islamic State brutes (February 2017)

Mosul Eye wrote:  ‘When you learn to care for the animal and be kind to them, then you will know the value of human life, in this life.

‘Everything is connected. There’s no part that is worthless. Thanks to Dr. Sulaiman who called…and agreed quickly to save them.’

The zoo is located in the eastern part of the city that has recently been recaptured by Iraqi forces.

‘The monkeys were jumping on the houses, scaring the children and stealing the fruit. Ducks and other animals were running around, the whole neighborhood had to run around trying to catch them,’ said Faten Amar, who lives across the road. 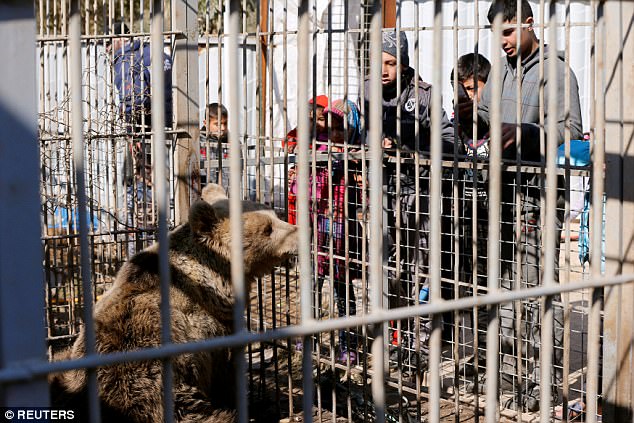 Some of the animals starved to death, while others escaped or were killed in the fighting (February 2017) 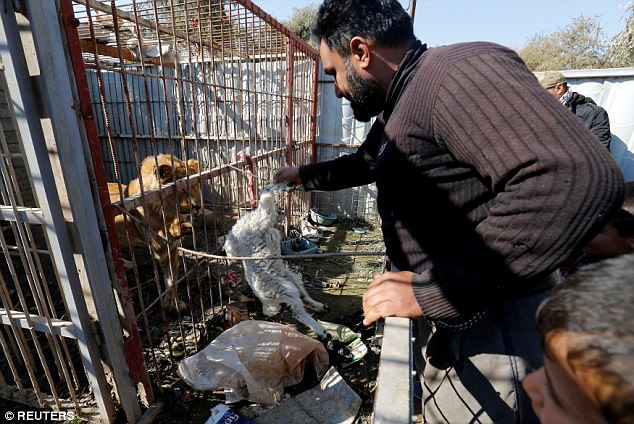 A volunteer feeds a lion at Nour Park in Mosul’s zoo. Of the four lions in the park, only two of the animals had survived by February 2017 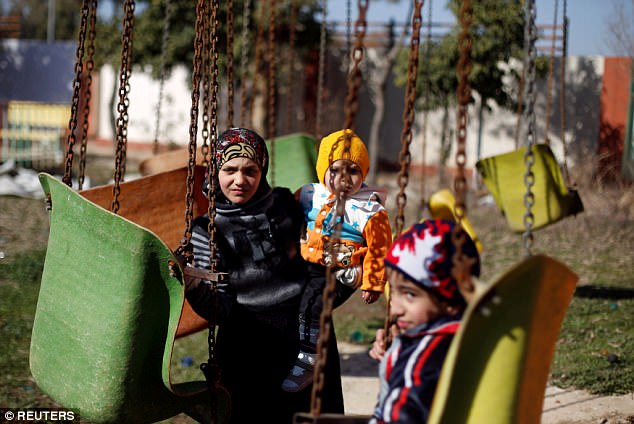 The park, which also features colourful children’s rides, sits in the eastern half of the city (February 2017)

People living around the park told Reuters they had been bringing their left-over food to the animals. But it was nowhere near enough in a city where human beings can barely survive, let alone zoo animals.

There used to be four lions. When the first two died, the surviving lions ate their remains amid the chaos.

A shell hit one of the cages and the monkeys escaped, causing havoc for nearby residents.

Another resident showed Reuters his son’s hand, red and scarred from a monkey scratch when he was attacked by one three weeks ago.

The park, which also features colourful children’s rides, sits in the eastern half of the city that has recently been retaken by Iraqi forces just over a year ago. 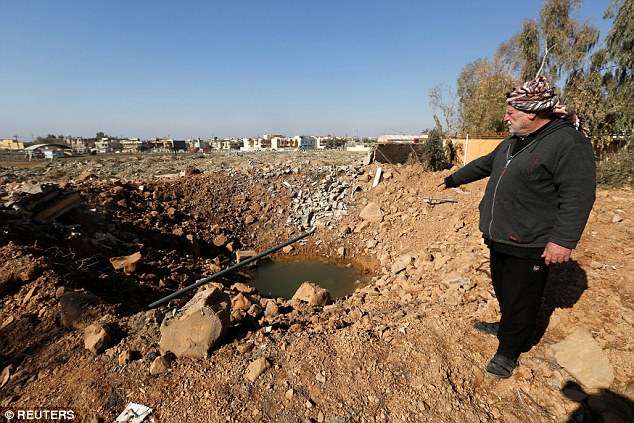 A man stands next to a hole caused by mortar shell at Nour Park. One shell hit animal cages, causing the moneys to escape (February 2017) 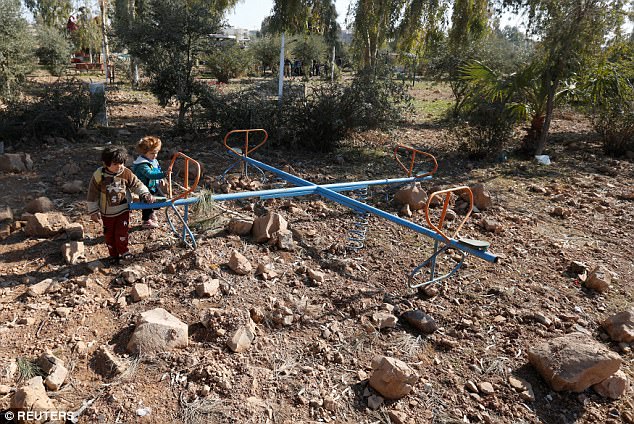 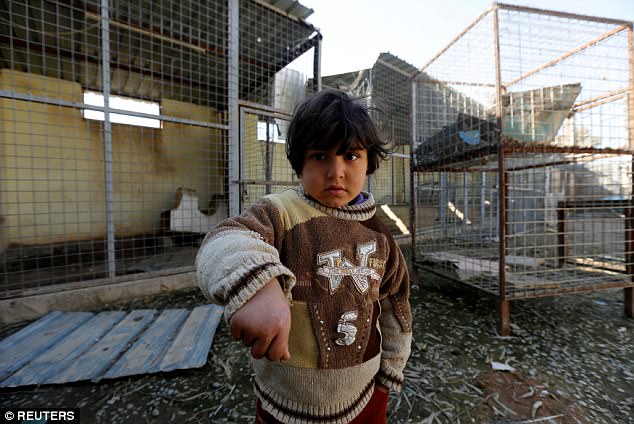