Mother, 22, was diagnosed with deadly pressure building in her brain after a trip to Specsavers

Specsavers saved my life: Mother, 22, says doctors dismissed her headaches – but an appointment with her optician spotted deadly pressure in her brain

A mother was diagnosed with a life-threatening build-up of pressure on her brain after a routine eye examination.

Megan Turner, 22, had been battling severe headaches and vision loss for months, which several doctors dismissed as nothing serious.

It was not until the mother-of-three booked an eye test at Specsavers in Exeter that an optometrist noticed her optic nerve was swollen.

Miss Turner, of Moretonhampstead in Devon, was urgently referred to hospital, where doctors discovered she had intracranial hypertension (IH).

This is the medical term for a build-up of pressure around the brain. Left untreated, IH can be life-threatening and causes blindness in up to one in five sufferers.

Miss Turner, who is due to marry her fiancé Ben next year, underwent ‘numerous life-saving procedures’ and now ‘has a future’.

Megan Turner was diagnosed with the life-threatening condition intracranial hypertension after a routine check-up at Specsavers. The mother-of-three is pictured left with the optometrist Emma Ginger, who noticed Miss Turner’s optic nerve was swollen

Speaking of the ordeal, Miss Turner said: ‘If I hadn’t gone for my eye test, it could have ended very differently for me.

‘I had seen many specialists for my headaches and loss of vision, but not one had detected the cause.

‘I could have lost my vision completely or even died. Then I visited Specsavers and now I have a future.’

During her appointment, Miss Turner sat in front of an optical coherence tomography machine.

This allows medics to assess the layers of the retina in a noninvasive way.

The retina is at the back of the eye and picks up on images the optic nerve then converts into impulses. These are sent to the brain, where a picture is formed. 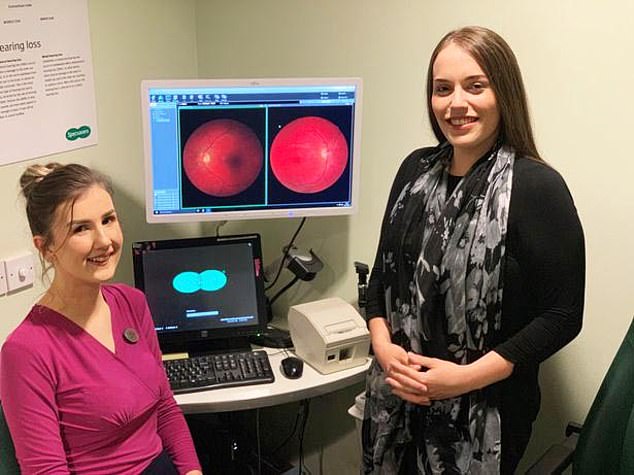 During her appointment, Miss Turner (pictured with Ms Ginger) sat in front of an optical coherence tomography machine. This allows the medic to assess the layers of the mother’s retina in a noninvasive way (seen on the screen), which led to her diagnosis

Abnormalities prompted Miss Turner’s optometrist Emma Ginger to refer her to the Royal Devon and Exeter Hospital, where she was told she had IH.

‘You just don’t expect to get a diagnosis like I had,’ she said.

IH can be caused by a tumour, infection or blood clot in the brain. However, what triggered Miss Turner’s condition is a mystery.

‘I then had numerous procedures to reduce the pressure on my brain, which has essentially saved my life,’ she said.

‘I am getting married next year and I have so much to look forward to.’

Scott McGowan, ophthalmic director at Specsavers, added: ‘Positive outcomes such as Megan’s are the highlight of what we do here.

‘It’s wonderful to know the impact our diagnosis had on her life.

‘It’s so heartening to see that by keeping up with her routine eye tests, our optometrist was able to pick up the early signs of Megan’s condition and could refer her for treatment at an early stage.

‘I hope stories like Megan’s can encourage others to keep up with their regular eye health checks as part of their sight test.

‘Not everyone realises the sight test is more than just whether you need glasses or not.’

WHAT IS INTRACRANIAL HYPERTENSION?

Intracranial hypertension (IH) is the medical term for a build-up of pressure in the brain.

This can come on suddenly due to a severe head injury or stroke, which is known as acute IH.

Chronic IH is rare. It does not always have a cause but can be triggered by a blood clot on the brain, or a brain tumour or infection.

Cases with no obvious cause are called idiopathic IH. This is more common in women in their twenties and thirties.

Idiopathic IH has been linked to obesity, chronic kidney disease and lupus.

It may also be triggered by hormone problems, an abnormal number of red blood cells and certain drugs, like steroids.

This form of the condition is thought to affect two in every 100,000 people in the UK, statistics show. Its US prevalence, and that of chronic IH, is unclear.

Treatment usually involves medication to remove excess fluid from the brain. Shunt surgery may also be required to divert this fluid elsewhere.

Left untreated, chronic IH can be life-threatening. Idiopathic IH also causes vision loss in one in every five to 20 people if untreated.