Mother, 22, who was nearly left paralysed while giving birth to her miracle baby

A young mother was nearly left paralysed after giving birth to her miracle baby.

Jessica Spain, 22, from Ramsgate, Kent, was thrilled to discover she was pregnant in August last year after doctors told it her it would be almost impossible for her to conceive due to her suffering from Polycystic Ovary Syndrome.

But her joy soon turned to anguish when the pressure put on her back during labour caused Miss Spain to develop a bulging disc in her spine, an inflamed rib cage and sciatica in both legs.

Although baby Ariella was born healthy, Miss Spain has been left housebound, barely able to walk and in constant agony.

Feeling like her life is ‘on pause’, Miss Spain believes she is not ‘being the mum my daughter deserves’.

Jessica Spain was nearly left paralysed after giving birth to her miracle baby Ariella. She was told she would likely never conceive due to her chronic PCOS. Miss Spain then suffered injuries during labour that mean she is now dependent on her partner Kain Scott (all pictured) 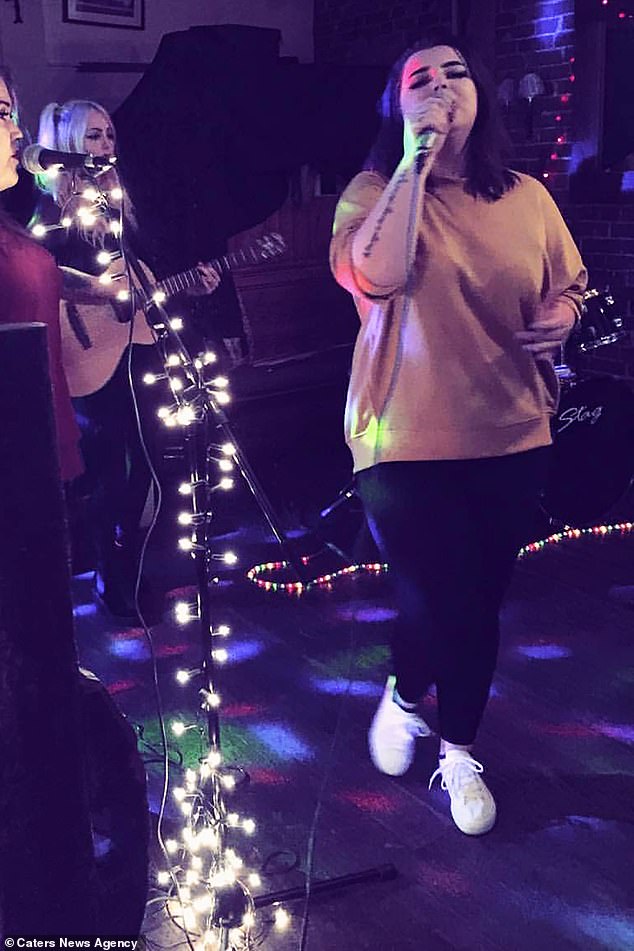 Pictured before the birth, Miss Spain used to be a keen singer and would perform regularly. She is now housebound, barely able to walk and suffers constant agony due to her bulging a disc during labour, as well as developing an inflamed ribcage and sciatica in both legs 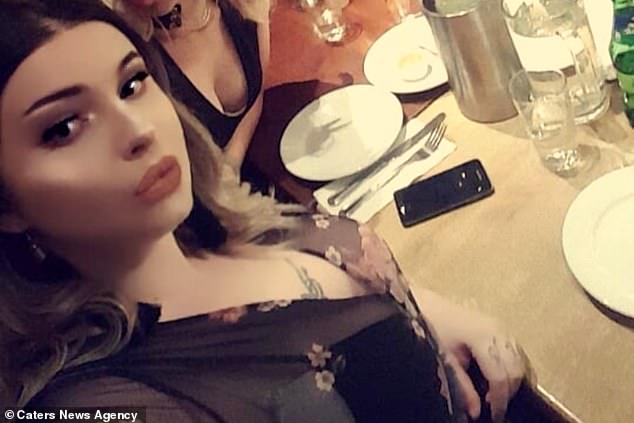 Pictured out on the town before she became pregnant, Miss Spain now describes herself as a ‘couch potato’, which has caused her to become anxious whenever she does leave the house

Miss Spain, who depends on a carer and her partner Kain Scott, 23, to help her get about, said: ‘My life has been put on pause by this. I feel like I can’t lead the life I want to live.

‘I can barely walk without a walking stick and have to have someone with me all of the time in case I fall.

‘It’s stopped me from being the mum my daughter deserves. I can’t take her out the house and she only goes out when my partner is here.

‘A lot of my friends have babies and I see them doing this stuff and I can’t do any of it at all.

‘I find it heartbreaking not being able to take Ariella to the park and to go on the swings. I want to be better, but I can’t be.’

Despite feeling like she has let her daughter down, Miss Spain claims Ariella is a ‘perfect angel’, which makes it easier for the new mother to cope.

‘It’s almost like she knows something happened. She’s really bubbly and happy all of the time,’ she said.

Although she is thought to have sustained her injuries while giving birth to Ariella, Miss Spain only began to feel unwell a month after her daughter was born.

‘Everything healed but i was still in pain, I couldn’t walk,’ she said.

‘All of a sudden my legs lost function, I was so scared.

‘Being a mum to a newborn baby is supposed to be a magical experience but this has definitely affected that.’ 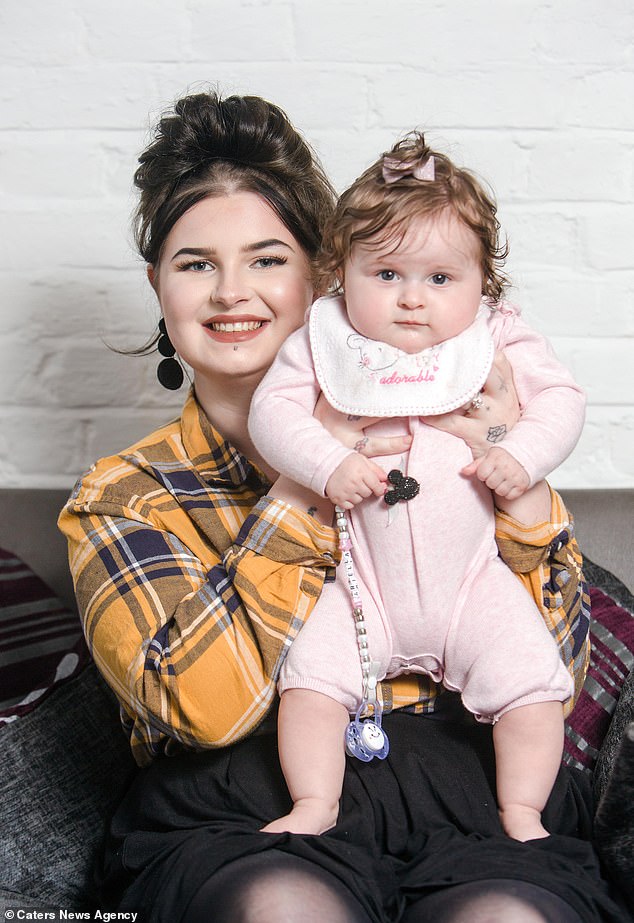 Pictured with Ariella, Miss Spain feels she is letting her daughter down by not ‘being the mum she deserves’. Despite the ordeal, Miss Spain describes the youngster as the ‘perfect baby’, insisting she is ‘really bubbly and happy all of the time’, which makes it easier for her to cope 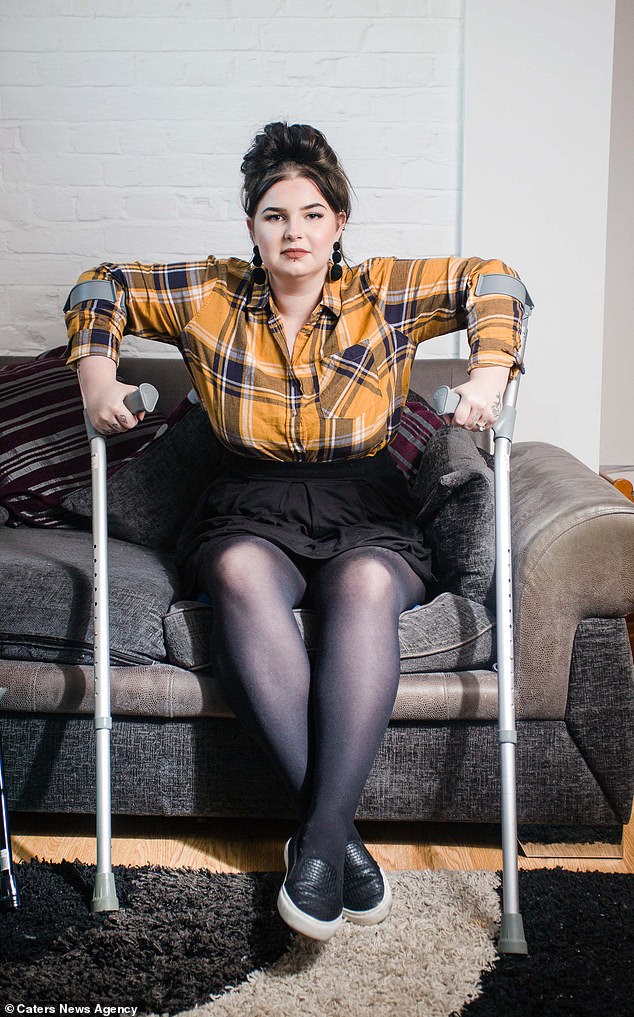 Miss Spain has to get around on crutches and always needs someone with her in case she falls. Ariella can therefore only go to the park with her father, which Miss Spain finds ‘heartbreaking’ 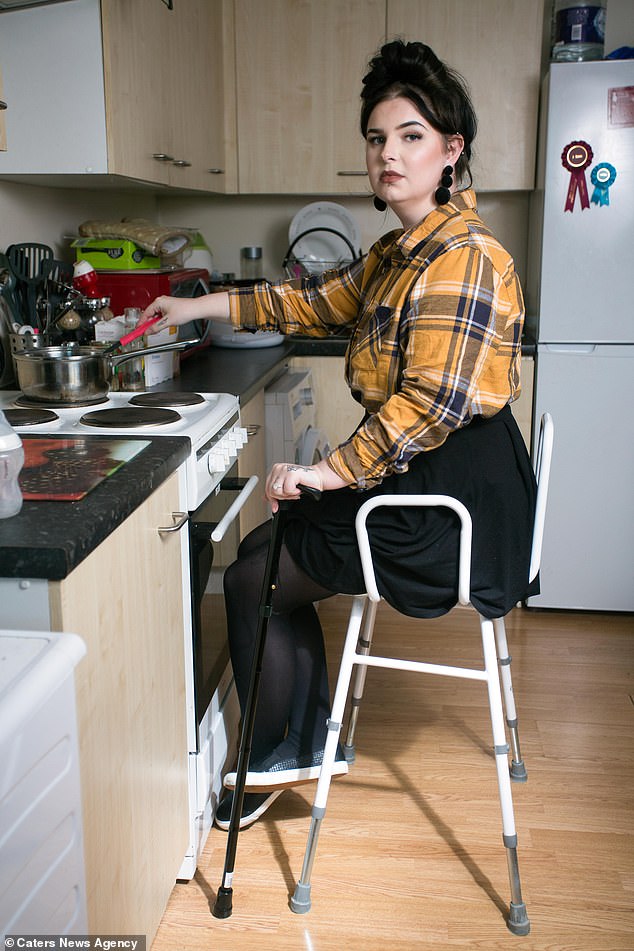 Despite her injuries, Miss Spain tries to stay as independent as possible and cooks on a stool

HOW DID MISS SPAIN’S INJURIES OCCUR DURING CHILDBIRTH?

A bulging disc is a common spinal injury that occurs when the soft cushion of tissue between the bones in the vertebrae pushes out. This can be extremely painful if it pushes on nerves.

Buldging discs can occur due to repeatedly poor posture or genetic factors that increase a person’s susceptibility.

However, childbirth can also be a cause if the force of labour results in a disc slipping out of place.

While pregnant, a woman also releases a hormone called relaxin, which loosens all the muscles and ligaments in her body to prepare it for birth. This can make it easier to slip a disc.

An inflamed ribcage, known as costochondritis, occurs when the junctions where the upper ribs join the cartilage that holds them to the breastbone become inflamed.

Although not often associated with childbirth, it can be caused if relaxin overly loosens the muscles around the skeleton.

Sciatica occurs when the siatic nerve that runs from the hips to the feet becomes irritated. This can cause the bottom, legs, feet and toes to become painful, numb or weak.

It is associated with pregnancy due to the extra weight an expectant mother carries for nine months.

A slipped disc can worsen this pain by further bulging or pinching on nerves in the spine.

As well as affecting her relationship with her daughter, Miss Spain claims her entire life has been turned upside down by her injuries.

‘I was really loud and outgoing before this happened. I used to dance and act but now I’m now a recluse,’ she said.

‘I feel like a burden. I’m a couch potato but not by choice.

‘I don’t leave the house. it’s very claustrophobic, I’ve become very anxious around people and I struggle to be outside.

‘I’m really limited to what i can do. I have to rely on other people to take me places, it can be hugely frustrating.’

Although restricted in her day-to-day activities, Miss Spain tries to stay as independent as possible.

‘I do the best I can, I have everything I need near me throughout the day,’ she said.

‘I have to keep everything at a level I can get to. I can just about cook using a perching stool.’