Mother, 26, is unable to have more children after surgeons removed the WRONG healthy fallopian tube

A healthcare worker has been left unable to have children naturally after a hospital removed the wrong fallopian tube during surgery.

Chelsie Thomas, 26, had ‘clearly’ suffered an ectopic pregnancy – when a fertilised egg starts to develop outside of the womb – in her right fallopian tube.

She had surgery in March last year at Walsall Manor Hospital – run by the same trust which employed her – and was told the right-side tube was successfully removed.

But the mother-of-one was called back to the hospital a week later when maternity staff raised concerns after reading her medical notes.

A further scan found Ms Thomas was still pregnant and the first surgeon had removed the left fallopian tube in error.

She had to have another surgery to remove the correct one and has now been left with none, meaning she won’t ever be able to conceive naturally.

Chelsie Thomas, 26, was rushed into surgery after an ectopic pregnancy was found in March 2018. It was ‘clearly’ in her right fallopian tube, but a surgeon removed the left one. Picture date unknown 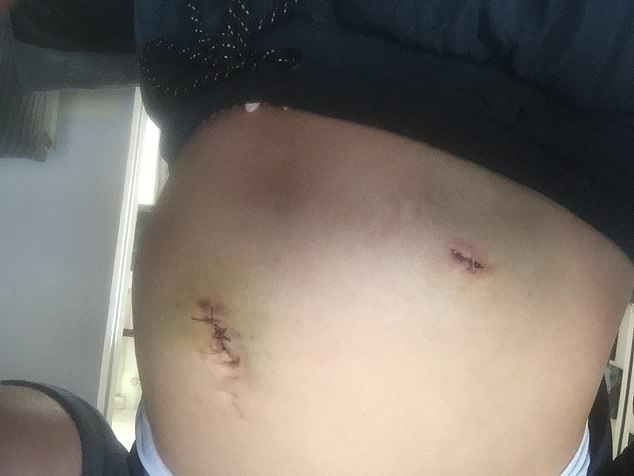 After the surgery which removed the wrong fallopian tube, Ms Thomas was still in pain and was called back to the hospital after medics were concerned about her notes

Ms Thomas, of Walsall, West Midlands, said her relationship with her partner broke down as a result of the surgery, she has quit her job and is on anti-depressants.

Walsall Healthcare NHS Trust, which runs the hospital, has apologised for the blunder and offered to pay for a round of IVF.

The mother to six-year-old son Riley-Jay said: ‘I have had to explain to my son that he cannot have a brother or sister.

‘I have had to leave my job because I can’t face going back there and I am going to have to have therapy because it’s getting worse not better.

‘None of this seems real. I am heartbroken and just feel numb at what has happened and devastated at how I can no longer have children naturally.’

Ms Thomas’s ectopic pregnancy was discovered after she noticed unusual bleeding and went to hospital on March 7 last year.

She had surgery the same day, but her healthy fallopian tube was removed by mistake.

‘After I came round from my first operation I felt really ill,’ she said. ‘I was in so much pain which continued throughout the day.

‘The next day the doctor who carried out the surgery came to see me and at this point told me that the operation went really well and I was told I could go home that morning.

‘Shortly after I got home, I received a call asking me to go back to hospital for a scan.

‘As I was being scanned, I said that I thought that the ectopic pregnancy had been removed and then I saw my baby’s heartbeat on the screen. I started to cry instantly.’

Ms Thomas said it has been difficult to come to terms with the facts that she not only had unnecessary surgery but has been left unable to have more children naturally.

She said: ‘I had planned on having two more children as I come from a large family. I wanted Riley-Jay to grow up with little brothers and sisters.’

Ms Thomas should still able to have IVF because her ovaries were not removed – a fertilised egg could still be implanted into her womb.

Ms Thomas said: ‘The hospital has classed this as a “never event” and it is difficult to understand how this has happened.

‘I just hope that it doesn’t happen to anyone else.’ 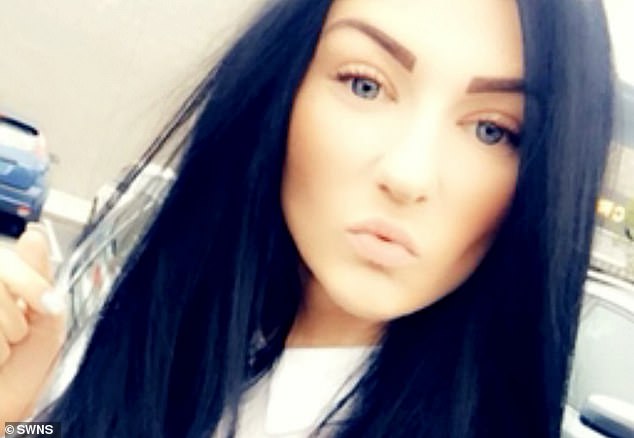 Ms Thomas said her relationship with her partner broke down as a result of the surgery, has quit her job and is on anti-depressants following the ordeal. Picture date unknown 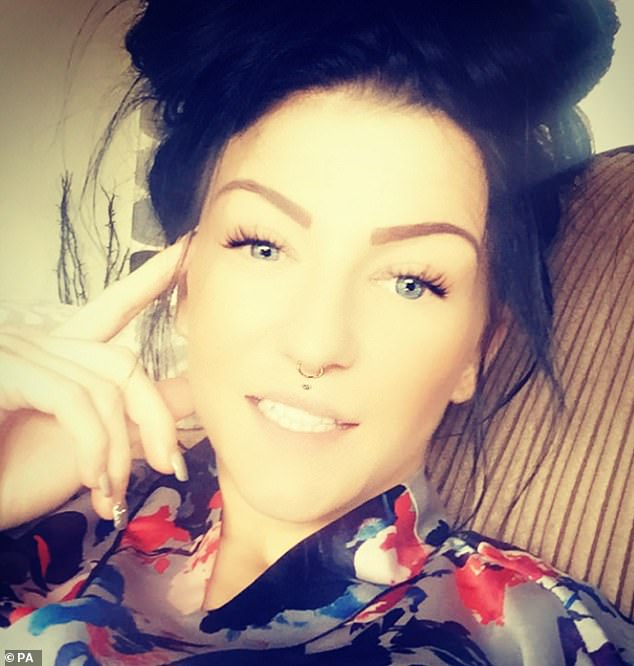 A report by solicitors found that the original procedure ‘was carried out without appropriate due diligence and attention’ and without the intervention of staff who flagged concerns about Ms Thomas’ care it is likely her fallopian tube would have ruptured. Picture date unknown 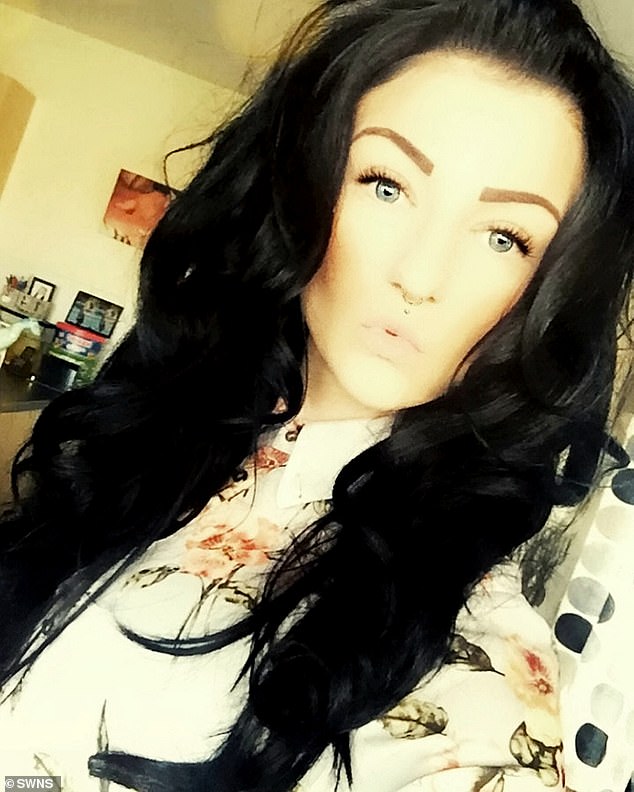 Ms Thomas, of Walsall, had to undergo another operation, performed by a different surgeon, to remove the correct tube, leaving her unable to naturally conceive again. Picture date unknown

WHAT IS AN ECTOPIC PREGNANCY?

An ectopic pregnancy is when a fertilised egg implants itself outside of the womb, usually in one of the fallopian tubes.

The fallopian tubes are the tubes connecting the ovaries to the womb. If an egg gets stuck in them, it won’t develop into a baby.

An ectopic pregnancy doesn’t always cause symptoms and may only be detected during a routine pregnancy scan.

Symptoms can include a combination of:

Symptoms of a fallopian tube rupturing or splitting open are:

This is very serious and surgery to repair the fallopian tube needs to be carried out as soon as possible.

A rupture can be life-threatening, but fortunately they’re uncommon and treatable, if dealt with quickly. Deaths from ruptures are extremely rare in the UK.

Irwin Mitchell said the trust has published an internal serious incident investigation report which said that the registrar and consultant involved in the first surgery seemed not to have given ‘appropriate weight’ to the original scan result.

It said the original procedure ‘was carried out without appropriate due diligence and attention’.

If Ms Thomas’s right tube had been ‘inspected throughout its entire length, the ectopic pregnancy should have been discovered and removed,’ the report stated.

Without the intervention of staff who flagged concerns about Ms Thomas’ care it is likely her fallopian tube would have ruptured due to the ectopic pregnancy, which could have had potentially life-threatening consequences, the trust said.

The trust, which has admitted liability, has offered to fund one round of IVF treatment.

Ms Thomas’s lawyers welcomed the NHS’s acceptance of liability and urged health bosses to act on recommendations from the hospital’s own post-incident report as soon as possible.

Solicitor Jenna Harris said: ‘Understandably Chelsie has been devastated by the events that unfolded and she is still struggling to come to terms with not only losing a child, but also the fact that she faces the possibility of not being able to have more children in the future.

‘Ectopic pregnancies can be extremely dangerous and Chelsie’s care has raised a number of very worrying questions.

‘The Trust’s own findings in its internal investigation report are quite damning.’

He said in a statement: ‘We would once again offer our sincere apologies to the patient involved for the fact that our care fell below the standard that we would expect for anyone who uses our services.

‘In this particular case, while the necessary checks were carried out before surgery and consent was given, an error was regrettably made.’

He added that the trust worked with ‘patients and their families, our own clinicians and staff to learn lessons and put systems in place to try and avoid such incidents’.

CAN YOU HAVE CHILDREN WITHOUT FALLOPIAN TUBES?

An ectopic pregnancy, occurring in one in every 90 pregnancies in the UK, is when a fertilised egg implants itself outside of the womb, usually in one of the fallopian tubes.

In an ectopic pregnancy, surgery is done to remove the pregnancy, usually along with the affected fallopian tube.

Removing the affected fallopian tube is the most effective treatment and isn’t thought to reduce your chances of becoming pregnant again, according to the NHS.

Normally when a woman becomes pregnant the egg is fertilised in the fallopian tube and then travels into the womb to grow into an embryo. Therefore without either fallopian tube, due to damage or because they are blocked, the egg and sperm cannot find each other.

This is called tubal factor infertility.

IVF can bypass the tubes as fertilised embryos are placed into the uterus, meaning women can still have children.

Although rare, there are records of women getting pregnant nautrally even though they don’t have fallopian tubes.

Davor Jurkovic, a consultant gynaecologist at University College Hospital in London, England, revealed it is not possible to completely remove the fallopian tubes during surgery.

He said: ‘It is not possible to remove the tubes completely at surgery as a part of them is passing through the uterine muscle and therefore it has to be left behind.

‘It is very likely that the end of one of her tubes has re-opened after surgery.

‘This would have allowed the sperm to enter the abdominal cavity and fertilise the egg after it had been released from the ovary.’

Other scientific papers have suggested surgery could leave small openings which join the ovary and womb in a way other than the fallopian tube, which could allow sperm to leak out of the uterus, or eggs to move into it – either of which could result in pregnancy.

Dr Hana Visnova, director at the IVF Cube fertility clinic in Prague, said an egg may be able to bypass the space between an ovary and uterus if the two were close together and the tube removal wound didn’t properly heal after surgery.