Mother, 29, reveals her purple belly button turned out to be a sign of advanced ovarian cancer

A mother-of-two has revealed how what she thought was a hernia turned out to be advanced cancer and needed life-changing surgery to remove.

Zowie Gallagher, 29, from Woodford Green in East London, was proud of the body she spent hours toning in the gym.

But after her belly button became painful and ‘bulky’, then later changed to an ‘outie’ and turned purple, she visited doctors who spent months trying to work out what was wrong with her.

Eventually they discovered she had ovarian cancer and a tumour the size of a mango on her pelvis.

Ms Gallagher needed her ovaries, womb and part of her bowel removed in an operation to cut out the tumour, which has left her infertile before her 30th birthday.

Luckily already a mother to two daughters, the nursery worker is now being monitored to make sure the cancer does not return, and is sharing her story to warn young women that cancer can affect them too.

Zowie Gallagher, pictured with daughters Lily (right) and Amelia, was told she had stage four cancer after what she thought was a hernia on her stomach turned out to be a large tumour

When gym bunny Ms Gallagher noticed her belly button had darkened and turned into an ‘outie’, she first assumed it was a hernia which can create a lump on the stomach.

But the reality was much worse and the growth was a sign of the stage four ovarian cancer she was diagnosed with five months later.

Now Ms Gallagher, who says she is thankful she had daughters Lily, 10, and Amelia, five, when she was young – before cancer left her unable to have more children.

Ms Gallagher said: ‘I want to share my story and my graphic photos so people know they are not alone when going through something like this, like me, so young.

‘My diagnosis led to me having a hysterectomy at just 28.

‘If I had waited to start my family at a more acceptable age, not at 18, I would never have had the honour to be mummy to my two little beauties.’

Spending hours in the gym to keep her svelte size 10 body toned, Ms Gallagher was the picture of health.

So she was baffled when she first noticed her belly button begin to protrude and turn purple in June last year. 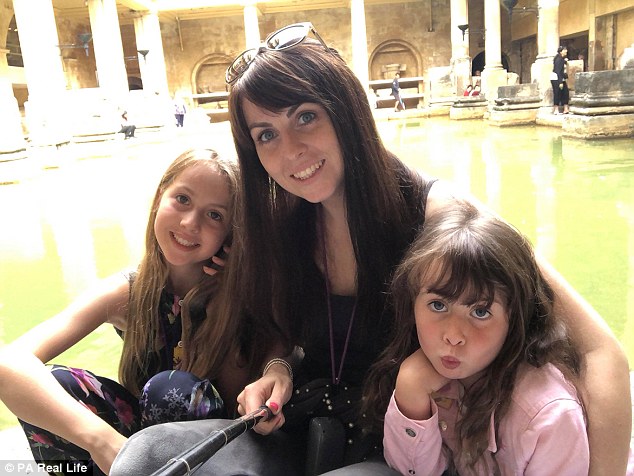 Ms Gallagher noticed her condition when her belly button became ‘bulky’, turned purple and felt painful or like it was pulling on her stomach 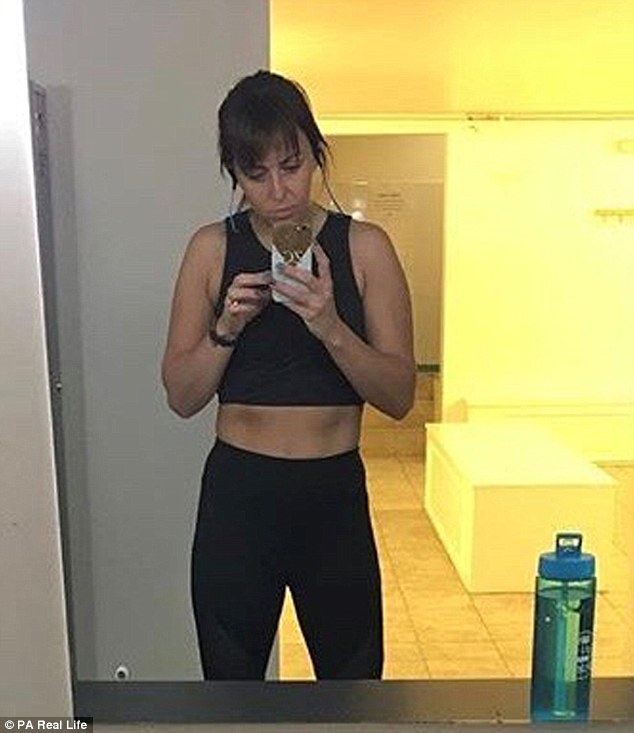 ‘It wasn’t bothering me, so I thought I would leave it. But I became more aware of my belly button, it felt like it was pulling,’ she said.

By September, she had grown concerned and decided to consult a doctor.

‘My belly button felt strange, like it was bulky, and got painful’

‘I’d just got my body to where I wanted it to be. I’d slimmed down from a size 14 to a 10 and felt amazing in myself,’ Ms Gallagher said.

‘But then I noticed that when I moved suddenly my belly button felt strange, like it was bulky.

‘It had started to get painful, like it was pulling.’

At her appointment, Ms Gallagher was sent for an ultrasound to see if she had a hernia, but then had a CT scan when medics spotted a growth in her body. 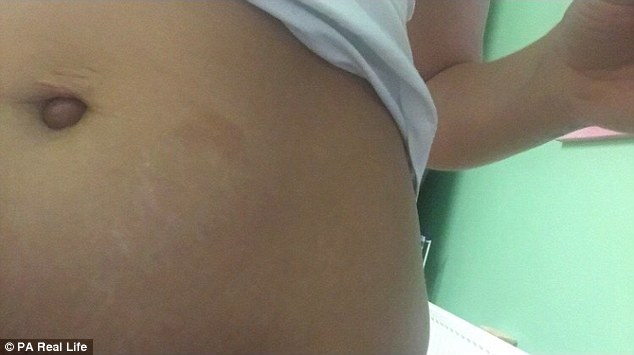 Ms Gallagher, a keen gym-goer, noticed her belly button changed and, even though she felt healthy, she was referred to a cancer specialist after doctors noticed a lump in her scans 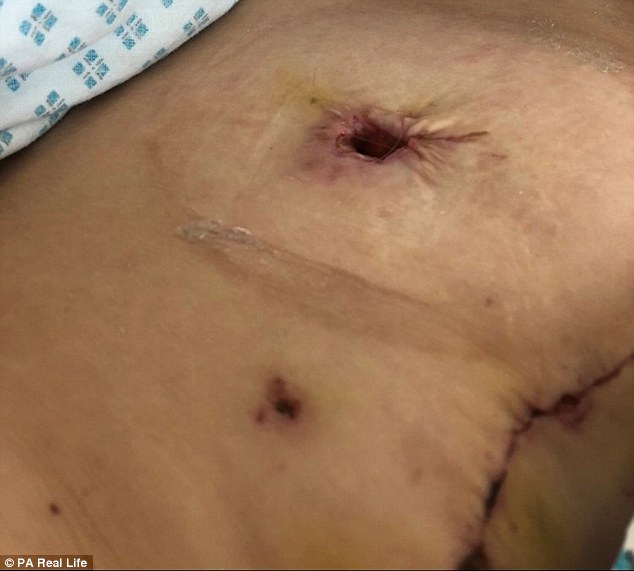 Ms Gallagher needed surgery to remove her ovaries and womb to get rid of the cancer, and has now been left infertile – she says she is lucky she started a family young 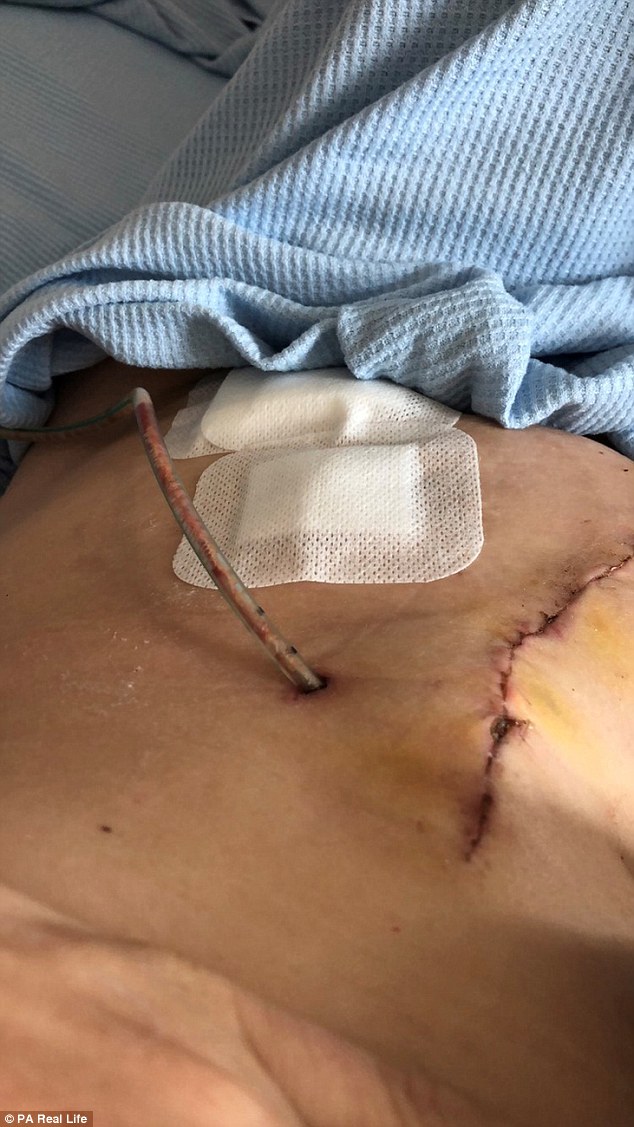 Surgeons also removed part of Ms Gallagher’s bowel, which has left her needing an ileostomy bag in order to remove waste from her body

As she waited, she underwent a routine smear test but the doctor struggled to find her cervix, and said they wanted an expert to take a closer look.

From there, she had more scans in January at Spire London East Hospital and, in mid-January, Ms Gallagher was referred to an oncologist at Queens Hospital in Romford.

Sent to a cancer specialist despite feeling healthy

‘I couldn’t understand why I could need to see a cancer specialist when I felt so fit and healthy,’ she said.

‘I felt the best I had ever felt in my whole life. I was in the gym a lot, looked great, could wear tight fitting clothes and feel fabulous.’

But her bubble burst when, after an MRI scan, biopsy and blood tests, her diagnosis was confirmed.

Ms Gallagher was told not only did she have stage three ovarian cancer, but doctors had found a 14cm tumour – the size of a mango – on her pelvis. 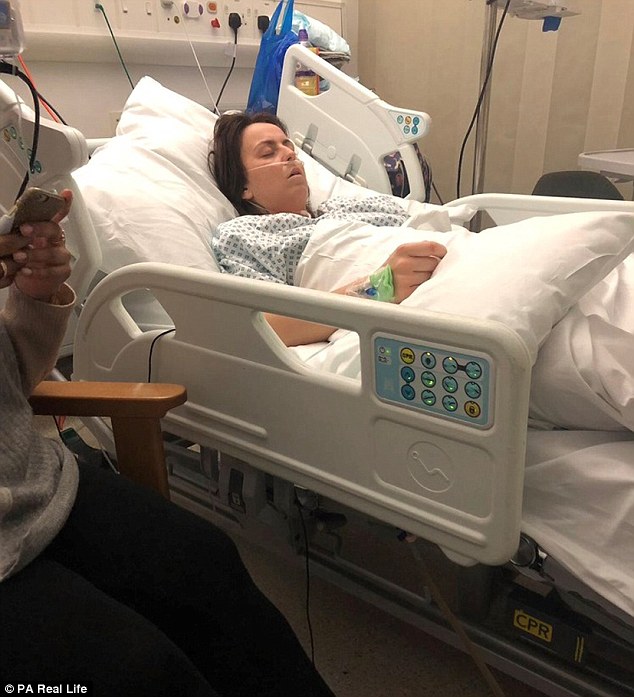 Ms Gallagher needed eight hours of surgery to remove the cancer from her abdomen, which was so big it was classified as stage 4B, meaning it was spreading away from where it started

‘I was devastated,’ she said. ‘They said I would need to have my womb, ovaries, my omentum – which is fatty tissue in the tummy – and belly button removed.

‘I was so thankful I already had my beautiful girls’

‘Losing all these organs meant I would never be able to have more children, so I was just so thankful I already had two beautiful girls, my first when I was 18.

‘I love being a mum, so it would have been earth-shattering for me if I had never had that chance.’

Two weeks after her bombshell diagnosis, on February 8, Ms Gallagher went under the knife for an eight-hour operation at The Royal London Hospital.

Ilestomy bag needed after part of her bowel removed

When she woke up, doctors broke more devastating news – there had been a complication and they had to remove part of her bowel.

This meant she had to have a colostomy, to divert one end of the colon through an opening in her tummy.

And in July this year the stoma was removed and she had an ileostomy bag fitted to remove her bowel waste.

‘Hearing that I needed a bag to collect waste was probably the most devastating part of it all for me,’ she added. 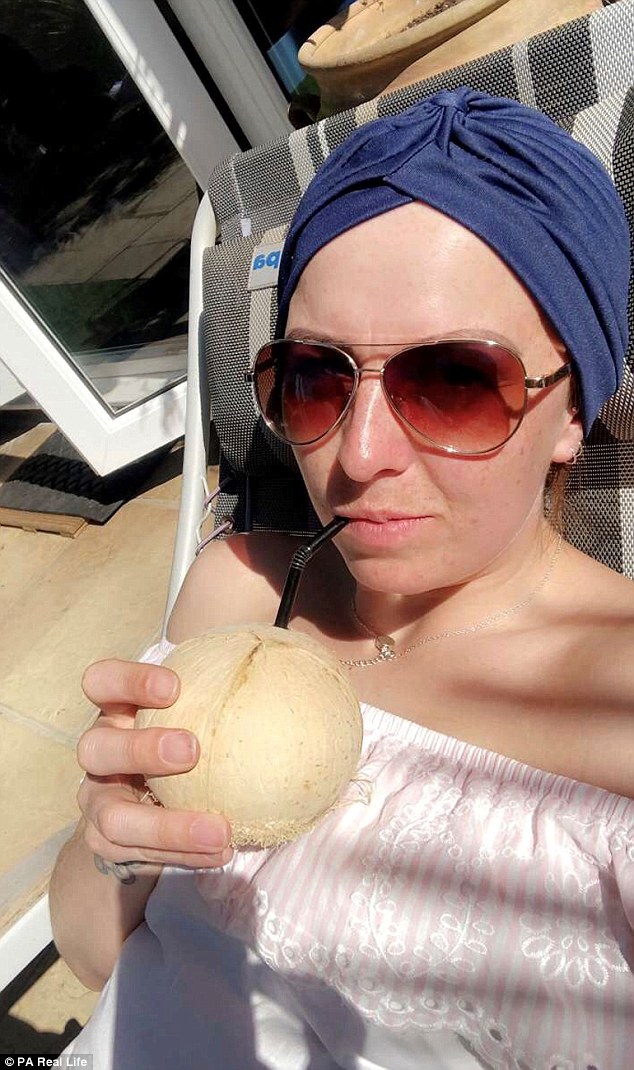 Ms Gallagher had aggressive chemotherapy after her operation but she begged doctors to stop because it was so painful and had devastating side effects – pictured, the nursery worker lost her hair during treatment 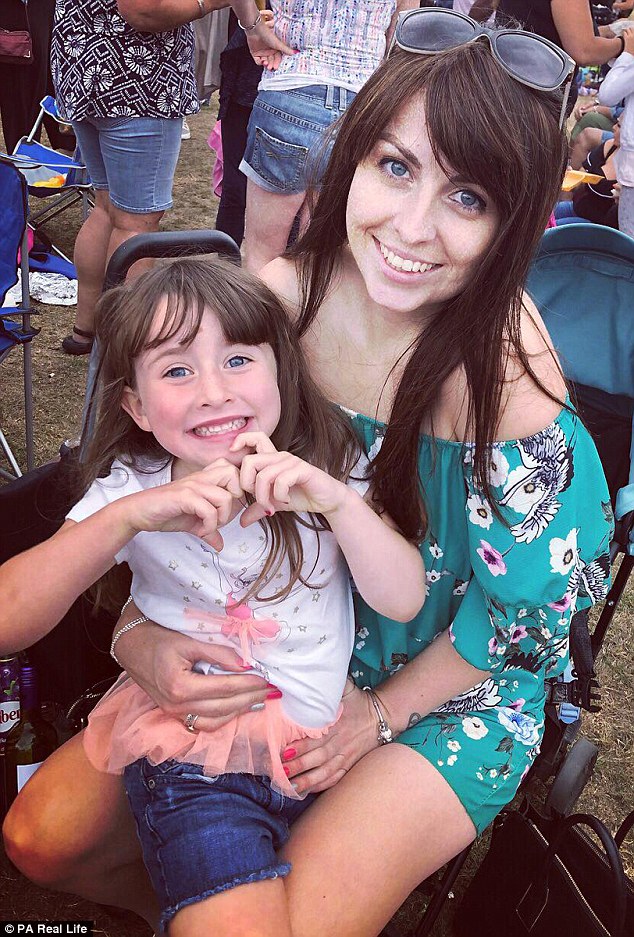 Ms Gallagher, pictured with five-year-old Amelia, says she is sharing her story to warn other young women that they could also be affected by the devastating cancer

‘They also told me because of the size of the tumour, the cancer had been reclassified as stage 4B, and not stage three.’

In April 2018, Ms Gallagher stared three rounds of aggressive chemotherapy – which, in the end, she begged doctors to stop because of the pain and side effects like feeling sick and extreme pain whilst walking.

‘I don’t worry that the cancer is still there,’ she said. ‘I wanted to be able to be a mum to my girls, to play with them and look after them.

‘I didn’t take the decision lightly.’

Now, adapting to life with her ileostomy bag, she is focused on enjoying time with her daughters.

Currently, she is being regularly monitored to ensure the cancer does not return undetected.

She has also expressed her thanks for the support she received from Macmillan Cancer Support through the Macmillan Centre at Queens Hospital.

Macmillan Cancer Support were able to help her by providing a wig as she went through chemotherapy, and her family with a grant to help with daily living costs.

Why ovarian cancer is called a ‘silent killer’

At the time of diagnosis, 60 percent of ovarian cancers will have already spread to other parts of the body, bringing the five-year survival rate down to 30 percent from 90 percent in the earliest stage.

It’s diagnosed so late because its location in the pelvis, according to Dr Ronny Drapkin, an associate professor at the University of Pennsylvania, who’s been studying the disease for more than two decades.

‘The pelvis is like a bowl, so a tumor there can grow quite large before it actually becomes noticeable,’ Dr Drapkin told Daily Mail Online.

The first symptoms to arise with ovarian cancer are gastrointestinal because tumors can start to press upward.

When a patient complains of gastrointestinal discomfort, doctors are more likely to focus on diet change and other causes than suggest an ovarian cancer screening.

Dr Drapkin said it’s usually not until after a patient endures persistent gastrointestinal symptoms that they will receive a screening that reveals the cancer.

‘Ovarian cancer is often said to be a silent killer because it doesn’t have early symptoms, when in fact it does have symptoms, they’re just very general and could be caused by other things,’ he said.

‘One of the things I tell women is that nobody knows your body as well as you do. If you feel something isn’t right, something’s probably not right.’